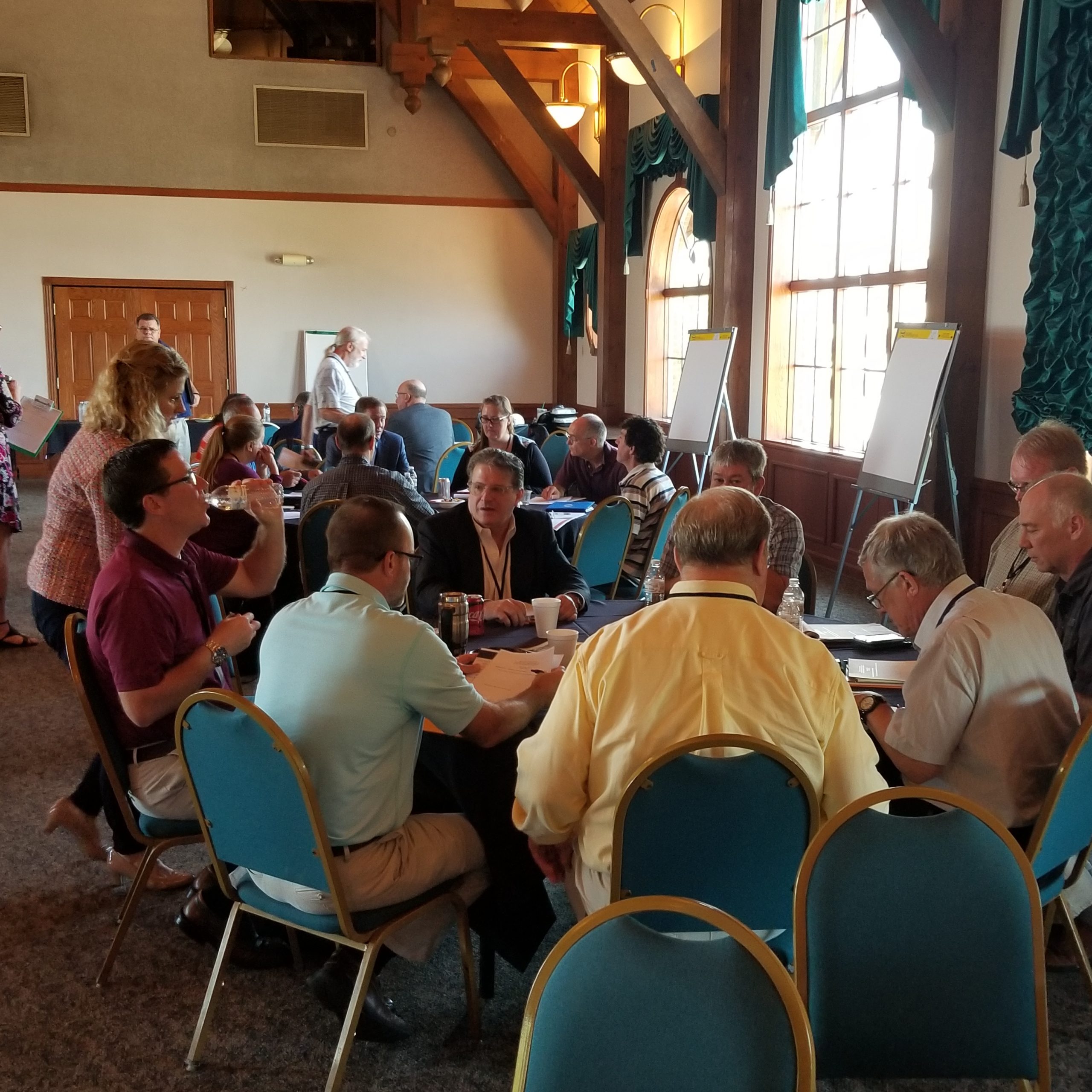 Beneficial Use Workshop in Peoria Highlights Success of Engineered Soils

The Peoria Beneficial Use Dredged Material Workshop was held by the tri-county regional planning commission in early September in Peoria, Illinois. The event addressed the beneficial use of dredged material in engineered soils to create a commercial soil product that would be an alternative to placing dredged material in contained disposal facilities (CDFs). The audience included practitioners; federal representatives; state departments of transportation, natural resources and stormwater management; ports; local governments; and more. The event, that attracted more than 90 people, included formal presentations, group discussion and breakout groups.

Finding a location to place dredged material is becoming a challenge, as CDFs are filling up and in-water sites are being scrutinized for any potential contaminants that might be coming from dredged materials explained Chuck Theiling PhD, research ecologist with the U.S. Army Corps of Engineers Engineer Research and Development Center, in his report on the conference proceedings. While the problem is widespread, the focus for this workshop was on the Illinois Waterway (IWW) that connects the Great Lakes and Mississippi River inland navigation with 336 miles of 9-foot channels. Maintaining depth requires dredging, but area CDFs are reaching capacity, so they need to be replaced, enlarged or offloaded.

New CDFs need to be placed about 10,000 feet from the dredge cut, limiting land availability and neighbors frequently oppose such sites making landowners unwilling to sell. The cost is also a factor as the purchase of land is usually from private landowners who are looking for the greatest return.

In light of the limited land and high cost, this conference brought together stakeholders to hear success stories and discuss opportunities and obstacles for using engineered soils.

States are starting to move the needle. Minnesota and Ohio shared success stories during the conference of how regulatory drivers initiated industry change.

“We invited Minnesota and Ohio representatives because they have regulations in place requiring the beneficial use of material, and we wanted to take a look at how the regulatory change was helpful in getting people going on finding beneficial uses.” Chuck Theiling PhD, research ecologist with the U.S. Army Corps of Engineers Engineer Research and Development Center, said. Theiling was instrumental in helping get the conference off the ground, and he has been studying the beneficial use issue for several years. “Both states put in requirements for water quality initiatives that required changing dredging practices,” Theiling said.

During the conference Minnesota’s success story was described by Marty Long, CEO Minnesota Mulch and Soil, and Todd Hubmer of Wenck. Through a public-private partnership with Minnesota Pollution Control Agency, Minnesota Department of Transportation and private and university partners, regulations and specifications were developed to permit the use of engineered soils. Thieling further clarified that the change stemmed from Minnesota Pollution Control wanting to reduce highway runoff to prevent contaminants from entering stream hydrology. The Department of Transportation looked for a solution and found that changing the shoulder and drainage in roadways would better filter out contaminants. Private industry stepped in to identify the sand coming from river dredging as ideal for this application because the grains are rounded by rolling around on the river bottom making them able to stack and drain well.

The private industry further found that by blending sand, silt, clay and organics, such as compost or yard waste, a topsoil could be produced that would encourage plant growth and water retention, ideal for large commercial landscapes and sports fields.

In the end, the state developed four grades of topsoil using the dredged sand and what are usually waste products that must be handled at a landfill. It is looking into whether waste from sewage treatment plants could also be blended with the soils, which would further reduce the costs to municipalities for various forms of waste treatment.

At the conference, Scudder Mackey, chief of Coastal Management at Ohio DNR, discussed the Ohio Healthy Lake fund investments in farm field, wetland and engineered soil demonstration projects, and David Emerman, dredge program manager and general counsel of the Ohio Lake Erie Commission, highlighted rule changes and the process that occurred to get projects off the ground.

Ohio’s rule change stemmed from problems with drinking water due to algal blooms. In 2015, to address this the state passed legislation to close all open-water disposal sites as of July 2020. Without this option, the state stepped up efforts to find alternatives to manage dredge materials. Emerman said that the state developed new surface water and solid waste rules for what would require a permit. Legislation passed in October 2017, changed the traditional process of dredged material as something requiring testing and a permit for placement or use, and authorized a new process. The new rules developed specific criteria for dredged material, and if those were met, the waste material classification, and need for excessive permitting, was removed.

At the same time, Ohio EPA, Department of Natural Resources and the Corps Buffalo District met monthly to identify constraints and possibilities for alternate use of dredged material. They secured $20 million from the Healthy Lake Erie Initiative to support a number of projects. The first $10 million came in 2015, and the state received an additional $10 million in January 2019.

The Dredge Research and Innovation Farming Team, a committee under the Ohio Lake Erie Commission, was developed to support using dredged material in local agriculture and it conducted demonstrations of crop growth using dredged material soil blends. Emerman, who chairs the team, said initial results have been very positive.

The Lake Erie Commission also implemented the Dredging Center for Innovation, which was completed in 2017, to create demonstration projects, including a project at the Port of Cleveland where a hydraulic sorting process of dredged material was implemented. Material drops out of suspension into sorting pools by weight so heavy material sorts to a different location than finer sands and clay. The sorting allows the various types of material to be managed separately simplifying the process of mixing in biosolids, composts and other materials to make engineered soils.

“The coarse materials is sold as is, the finer material is sold as fill for construction projects or blended with compost and sold as soil. About half of what’s dredged is beneficially used,” Emerman said.

Don McNeil of Caterpillar Corporation, discussed the steps required to build a team and establish common goals as he did with the formation of the Natural Infrastructure Initiative (NII), which include representatives from Great Lakes Dredge & Dock, The Nature Conservancy, Brown & Root and AECOM. NII promotes the use of and funding for natural infrastructure with a particular focus right now on the reuse of dredged materials.

McNeil also discussed Caterpillar’s Mapleton Foundry Engineered Soil Pilot Project, which produced manufactured soil to meet Minnesota Department of Transportation specifications. The company demonstrated the technology could be identified, researched, transferred and established in practice in only 18 months. The long-term goal for this project is to develop a sustainable business, find new ways to blend soils for unique needs, and use the soil to support waterway operations.

Dr. Yanfeng Ouyang, Department of Civil and Environmental Engineering at the University of Illinois, followed up with a discussion on how water transportation of engineered soil reduces the needed movement of sediment from dredge to shore, dredge to truck, truck to unloading location and could help bring rural supplies of the soils to urban areas that have a greater need for the soils. Dredged materials have traditionally been transported by truck but that limits the amount moved and the areas which can be accessed. Barge transport would be more efficient.

Ray Lees, Tri-County Regional Planning Commission, presented the Peoria Lakes Comprehensive Conservation Plan, which recommends blending the lake sediment with waste products for use in highway construction and stormwater management. The model would be for a non-profit to coordinate logistics, cover tipping fees for municipal waste disposal, find contractors to produce the engineered soil and conduct sales of the soil. Part of the plan would be to conduct an economic feasibility study to understand the market size for engineered soil, identify the business structure for production and identify a route to long-term profitability.

The conference continued with presentations by federal agencies on opportunities and obstacles to engineered soil use, such as the existing regulatory climate, fear of product contamination and liability and CDF capacity issues.

More states also followed, Iowa, Wisconsin, Missouri, to talk about their issues with capacity in CDFs, regulatory hurdles, and what could be possible solutions.

According to Thieling, the significant outcomes from the workshop identifying champions and stakeholders for engineered soils, learning about successful state initiatives and projects, better defining Illinois Waterway needs and objectives and outlining a business model for developing engineered soil and identifying the market.