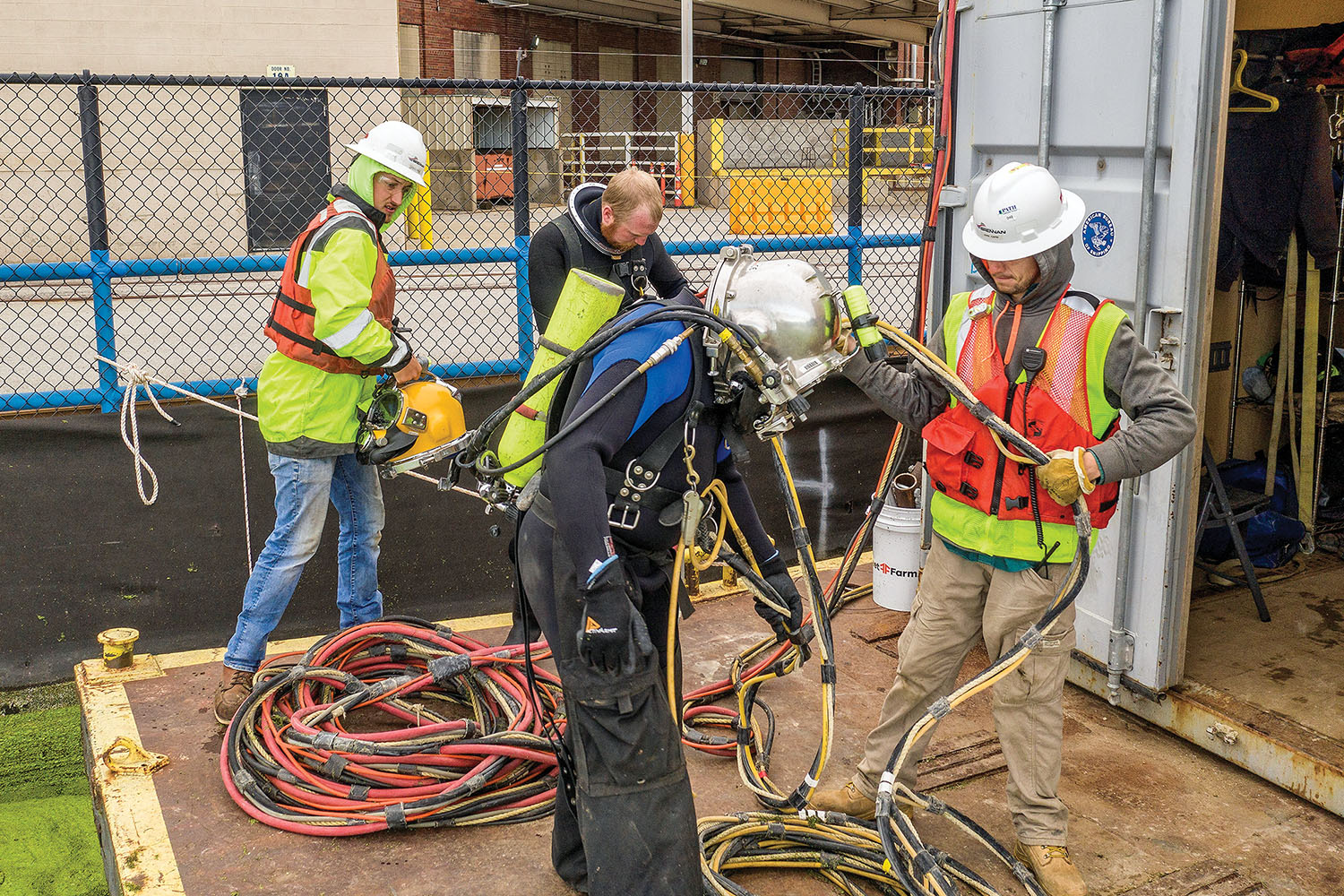 Thorson continued: “Frequently, when working to remove formwork, and repair or weld metal, our divers need to utilize drills, hydraulic tools, pneumatic tools and underwater welding tools. They need to switch tools and/or have downlines that need management. Rather than steal away the attention of the supervisor or tender (who’s in charge of the umbilical), we’re making sure we have someone on standby to assist. Many organizations that we work for, and most recently, even private companies, are requiring four-person crews for risk mitigation purposes.”

“As we see other organizations in the industry move to four-person crews, we’re setting it up so that we’re already prepared with dive plans and personnel,” said Thorson. Private companies have their own standards, beyond what used to be a U.S. Army Corps of Engineers regulation.

The Association of Diving Contractors International (ADCI) gives guidance that requires, at a minimum, a three person dive team. This practice is sufficient in some circumstances, such as non-penetration inspections, said Thorson. Although the ADCI has not yet ruled to require a four person minimum for dive teams, Brennan sees the necessity of providing the extra team member for both quality of work and for the safety of all personnel, he said.

Canada’s version of the ADCI—The Divers Certification Board of Canada (DCBC)—has already implemented a four person crew minimum across the board.

Four-person dive teams have existed at Brennan for decades based on the task at hand and the requirements from the bid or job.

• Diver: Brennan’s 60-plus commercial divers are all ADCI-certified professionals who perform specific tasks, inspections, construction, welding, maintenance and recovery jobs underneath the waterline.

• Tender: The surface member of the dive team who works closely with and monitors the diver throughout the dive, including checking the diving equipment and air supply before the dive, while managing the diver’s umbilical.

• Diving Supervisor: The supervisor is directly responsible for the entire dive operation. Accountable for team safety, communication and managing any incidents or accidents that occur during the dive.

• Standby Diver: The fourth member of Brennan’s dive team, the standby diver is prepared to enter the water at any time during a dive should the diver become stuck or, injured, or need additional tools. The standby is also in charge of managing pneumatic lines for the power tools the diver is using. This way, the tender can stay focused on the umbilical throughout the job.

In an emergency where a diver may be affected, the standby diver will switch breathing air to the backup air source; enter the water with the diver’s umbilical in hand to follow it to the diver; insert a pneumo-fathometer (a device that measures the diver’s depth) hose into the diver’s helmet; secure the diver for recovery; and have both the standby and affected divers’ umbilicals hoisted to the surface in unison. At the surface, the affected diver is brought onto the diving platform, where life-support equipment is removed and first aid performed before transporting the diver to the extraction point.

“With a three-person team, this process is nearly impossible,” said Pratt. “Without a standby diver, the tender becomes the rescue diver and the supervisor is left alone at the surface to carry out all remaining duties. Our work often involves direct interaction with differential pressure (Delta P) environments. These types of projects are the most dangerous for inland divers and provide the greatest chance for a rescue situation. Coupling those complex environments with a heavy workload on a three-person crew can result in poor performance in emergency or rescue situations. The tender commonly performs general labor tasks and provides tools during a dive project while monitoring the diver, and the duty of the tender becomes split, resulting in a dangerous situation should the diver need assistance or become unresponsive.”

Exceptions to the four-person rule are simple observational dives that can be safely conducted with three people. In these dives, the supervisor manages communication and the dive in general, the tender manages the umbilical, and the diver is simply observing the site, possibly using a tape measure, yardstick or sounding hammer. But when power tools get involved, a designated standby diver is added to manage downlines, help change out tools, or help the diver if needed.

A recent example of a four-person job is the ongoing construction of the I-74 bridge spanning the Mississippi River at Davenport, Iowa. Brennan divers have visited the site several times a month for the past two years, and the contract will continue through the next two years of bridge construction.

The work requires underwater burning and removal of form work. When a bridge is being built, the foundation is laid using forms. Once the forms take shape, the dive crew burns off the bolts of the formwork using an underwater exothermic cutting rod. The diver is using the cutting rod, the tender is holding the umbilical, the supervisor is communicating and managing the job, and the standby diver is checking fuel, handing over tools and is in control of the downlines.

An example of a safe three-person dive is a post-strike inspection at the Mississippi River bridge at Louisiana, Mo., on October 2 and 3 of this year, where the dive team was able to use a three-person crew because it required only a Level 1 visual and tactile inspection. Light hand tools, such as tape measure, yardsticks and a sound hammer were used, none of which would pull the tender away from monitoring the umbilical. Nothing obstructed the diver from easily reaching the surface while underwater, and it was shallow enough of a dive that one diver could complete the task.

OSHA, the U.S. Occupational Safety and Health Administration, describes commercial diving as one of the most hazardous construction-connected occupations, and in its safety manual says “Commercial divers are exposed not only to the possibility of drowning but also to a variety of occupational safety and health hazards such as respiratory and circulatory risks, hypothermia, low visibility, and physical injury from the operation of heavy equipment under water. The type, length, frequency of dive and the type of operation increase the already high risk of this strenuous work. Additional hazards are also associated with the actual work, such as underwater cutting and welding, materials handling, hull scrubbing, and use of hand and power tools.”

Brennan has emphasized safety since the inception of its Dive Group in 1976, when its first diver, Ray Kronforst, took it upon himself to acquire commercial diving training and certification. Since then, the Dive Group has expanded to more than 60 members and provides and maintains the safest possible diving equipment for each job.

The company takes an active role in ADCI through its diving safety manager, who is elected to sit on the ADCI board and who keeps the Brennan team informed of all rules and regulations pertinent to safe diving practices.

Brennan’s internal online blog contains frequent items on commercial diving. A recent post about under-ice diving concluded: “We always strive to do things the right way, by the book. We are taking all of the safety factors into consideration on a daily basis. This not only keeps us safe under the ice but shows our clients that we go above and beyond concerning safety standards.”