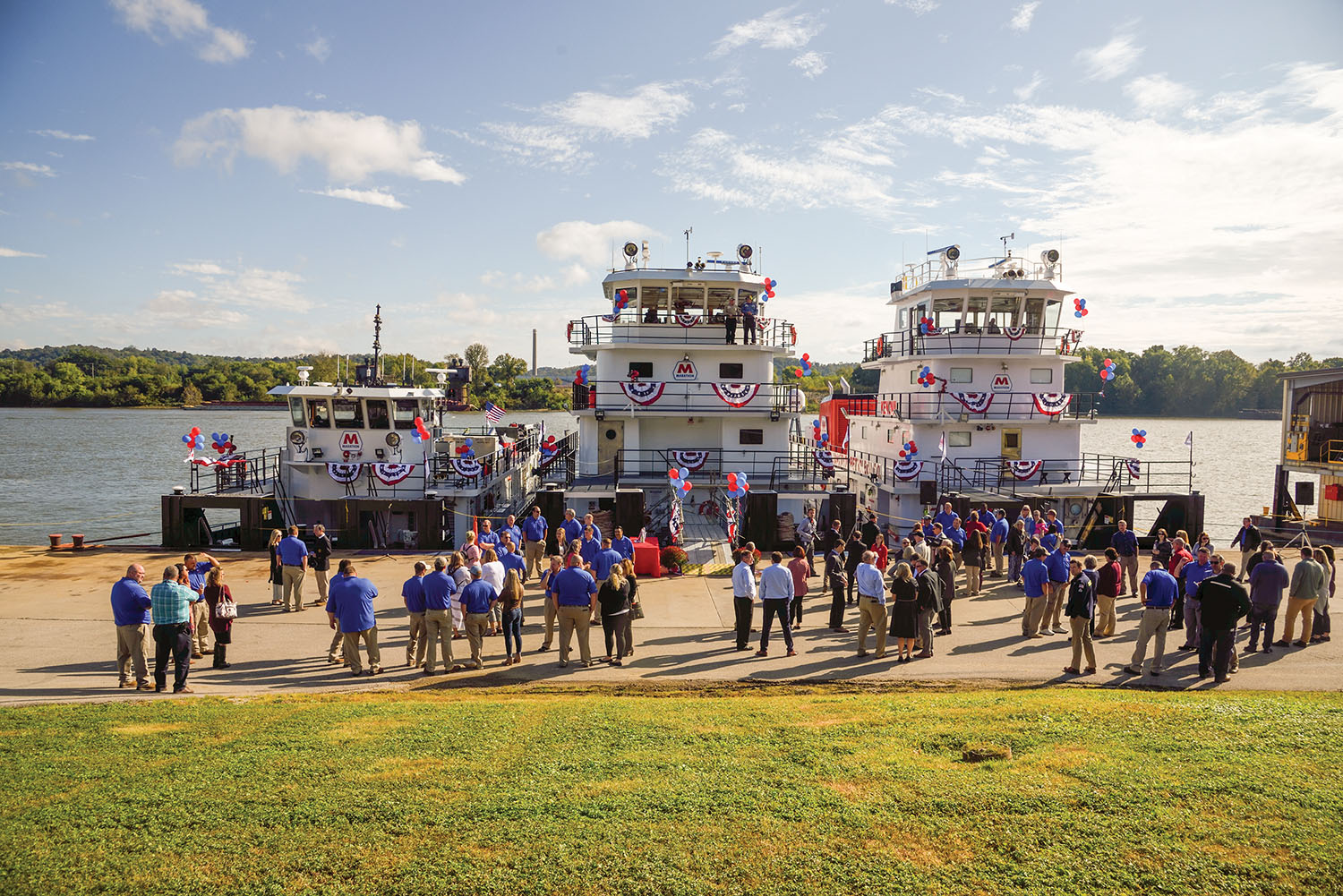 Marathon Petroleum Company officially welcomed three boats to its fleet October 8 with a christening ceremony at its Marine Transportation docks at Catlettsburg, Ky.

Todd Sandifer, manager of Marathon Marine, said the Mt. Vernon was built in 2011 at Horizon Shipbuilding at Bayou la Batre, Ala. It is the former Louis Develle. The 6,000 hp. Mt. Vernon is 140 feet long by 42 feet wide. It carries 83,000 gallons of fuel and typically moves six to nine barges on the Mississippi River. The vessel is operating with a crew size of eight, but it can accommodate 12 people. By horsepower, the Mt Vernon is the largest inland river vessel Marathon has ever owned, he said.

The Kenova is the former mv. Gianna Hull. It was built in 2018 at Harvey, La. The 4,000 hp. Kenova is 120 feet by 35 feet. It carries 56,000 gallons of fuel and typically operates on the Ohio River and its tributaries moving six to eight barges. It has a crew of seven but room for nine.

The Patoka is the former Marty Cullinan. It was built in 2016 at Horizon.  The vessel is 120 feet long by 35 feet wide and 4,000 hp. It also carries 56,000 gallons of fuel and typically operates on the Ohio River and its tributaries, moving six to eight barges. It has a crew of seven, and it is the first retractable pilothouse boat in Marathon’s fleet (see WJ, June 17).

Sandifer said he expects the Patoka to be used in the Pittsburgh area during high water there.

“You get it a lot quicker. We had purchased the first set from Florida Marine. People liked the boats. They’re comfortable, they maneuver well, and the captains fell in love with them,” Sandifer said.

Marathon is based in Findlay, Ohio. Technically, its marine division is part of MPLX, a diversified, large-cap master limited partnership. Marathon formed MPLX  and owns the general partner and majority limited partner interest in MPLX. MPLX owns and operates midstream energy infrastructure and logistics assets and provides fuel distribution services. Marathon dropped its marine operations to MPLX, but the boats still carry the Marathon name and Marathon organized the christening.

As Marathon has increased its refinery capacity and expanded its markets, it has added to its marine division to move product by water, Sandifer said. Marathon is moving more product from its refinery at Robinson, Ill., into the Nashville market. And it is moving crude oil from the Utica shale region of eastern Ohio, he said. Instead of hiring out the increased workload, Marathon decided to invest in its own equipment, he said.

The addition of the three boats gives Marathon a total of 23 in service, including the two harbor boats at Catlettsburg—the Kyova and the MAP Runner, Sandifer said. Marathon is having a new harbor boat built nearby at Superior Marine at South Point, Ohio, to replace the Kyova this year or next, Sandifer said.  The Kyova was built in 1983. It has had some maintenance issues, Sandifer said. When the new boat goes into service, the Kyova will be sold or refurbished and used for backup, he said.

John Swearingen, executive vice president of logistics and storage for Marathon Petroleum, began his speech at the ceremony by telling the audience of Marathon employees and others that when he was in the Boy Scouts, he was told he “swam like a barge.”

He said Marathon must be able to transport fuel to terminals along the inland rivers in several regions including the Southeast and Midwest and to export markets. The marine division allows the company to provide “a near seamless supply to our customers,” he said.

The bottles of champagne were broken against the towknees of the boats by their three sponsors: Laurie Wilkins of the Kenova, Paula Aydt of the Mt. Vernon and Janet Whikehart of the Patoka.

David Earl, manager of operations for Marathon Marine Transportation, said the addition of the three boats increased marine employment in the Catlettsburg area by 52 jobs. He said the Kenova and Patoka are near twins from the first deck down. All three boats have vibration deadening and soundproofing technology for crew comfort, he said.

Port captain James Ward said Marathon had to make some changes to the boats after acquiring them from Florida Marine. Along with changing the exterior color scheme from blue and white to red and white, Marathon had to change out some equipment so the boats met its specifications for operation and safety, he said.

Marathon spokesman Chris Kozak said all the major equipment on the boats is the same as when they were operated by Florida Marine, but  Marathon installs an internally developed condition-based monitoring system that allows it to monitor operating conditions from shore. Marathon also installed a state-of-the-art satellite system from Isotropic that gives its crews constant communication with shore-based systems, he said. Marathon also equipped the vessels with man-overboard equipment that it developed in collaboration with McCulley Eastham & Associates.

Caption for top photo: The mvs. Patoka, Mt. Vernon and Kenova are docked at the Marathon Petroleum facility at Catlettsburg, Ky., before their christenings on October 8. (Photo by Jim Ross) 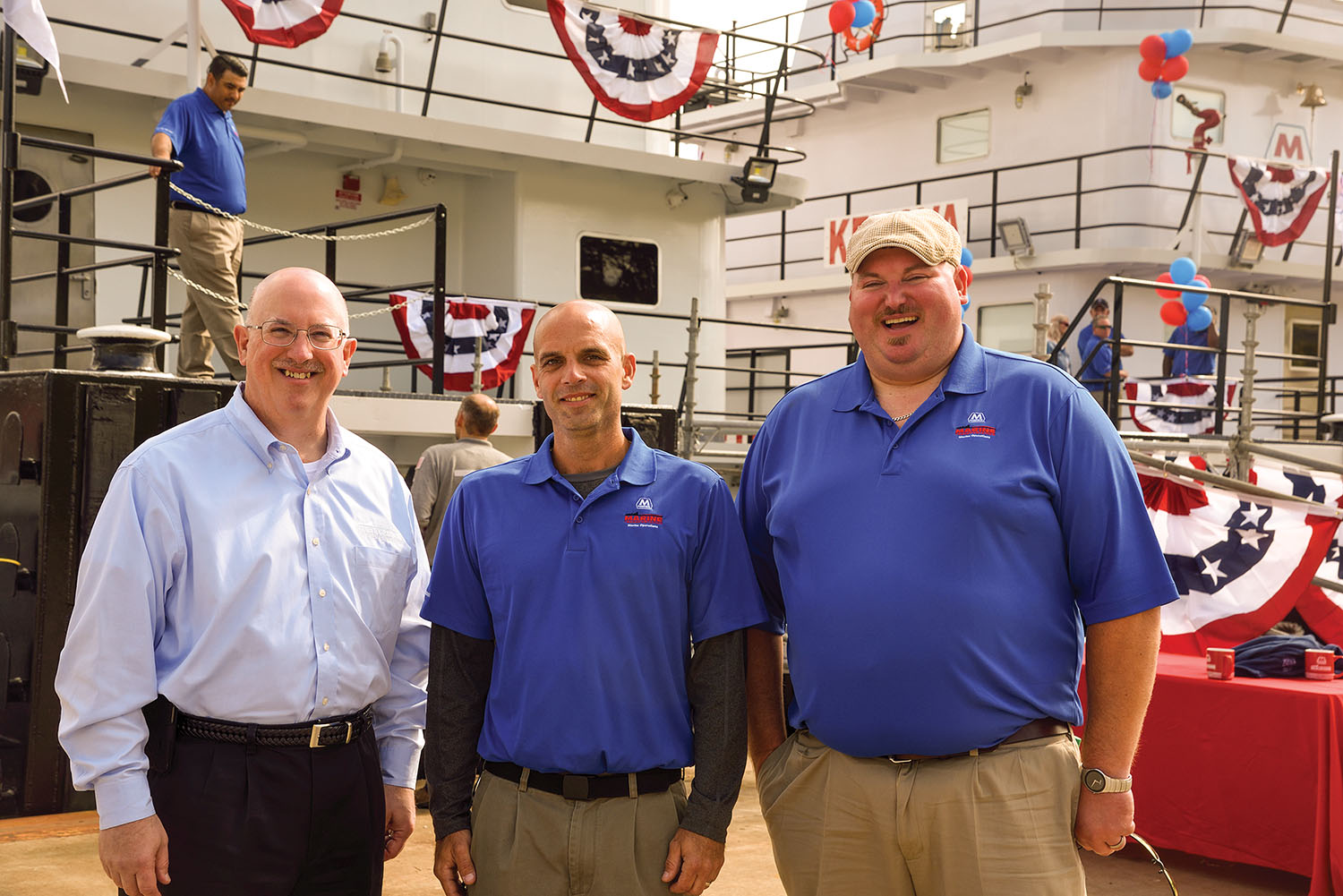 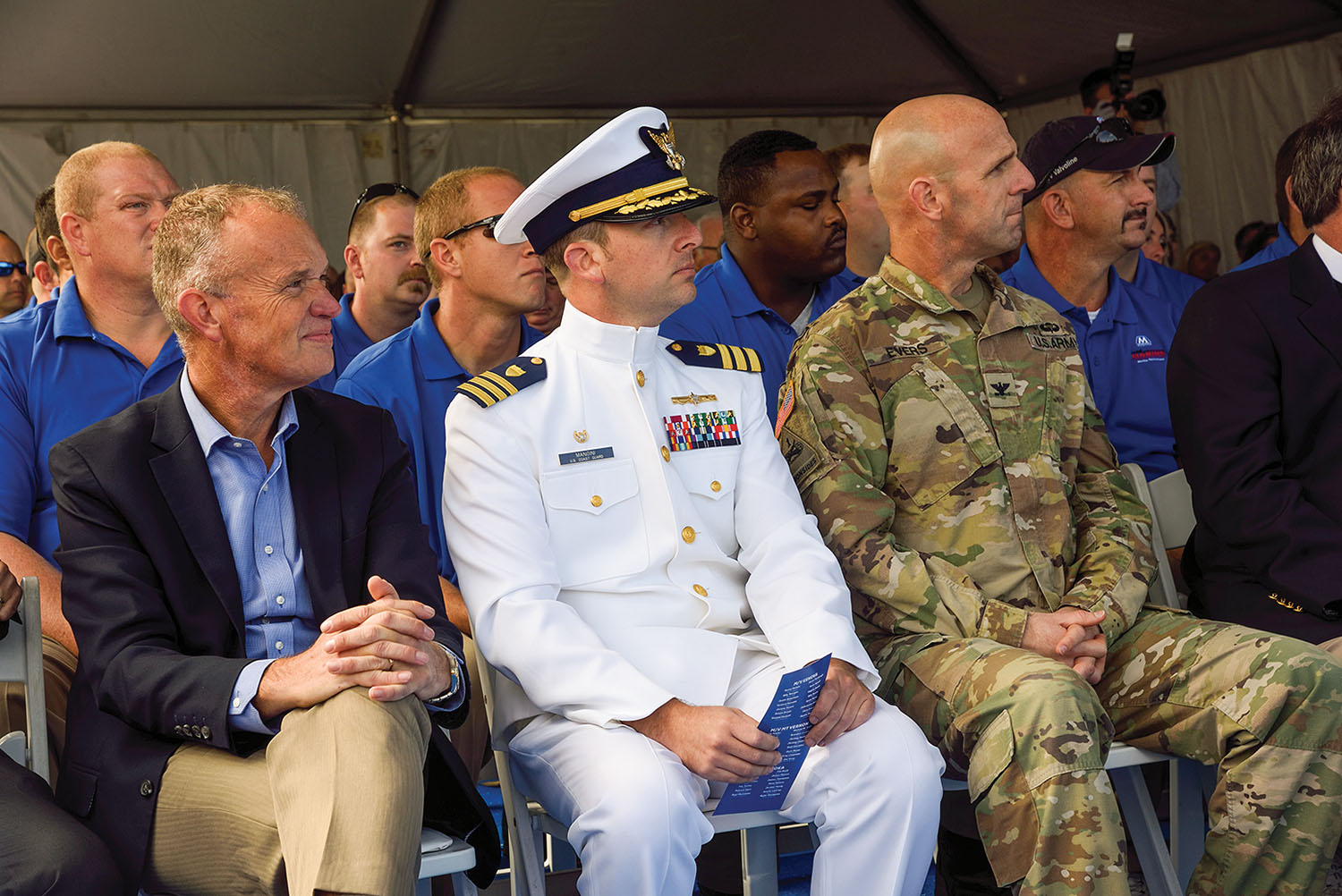 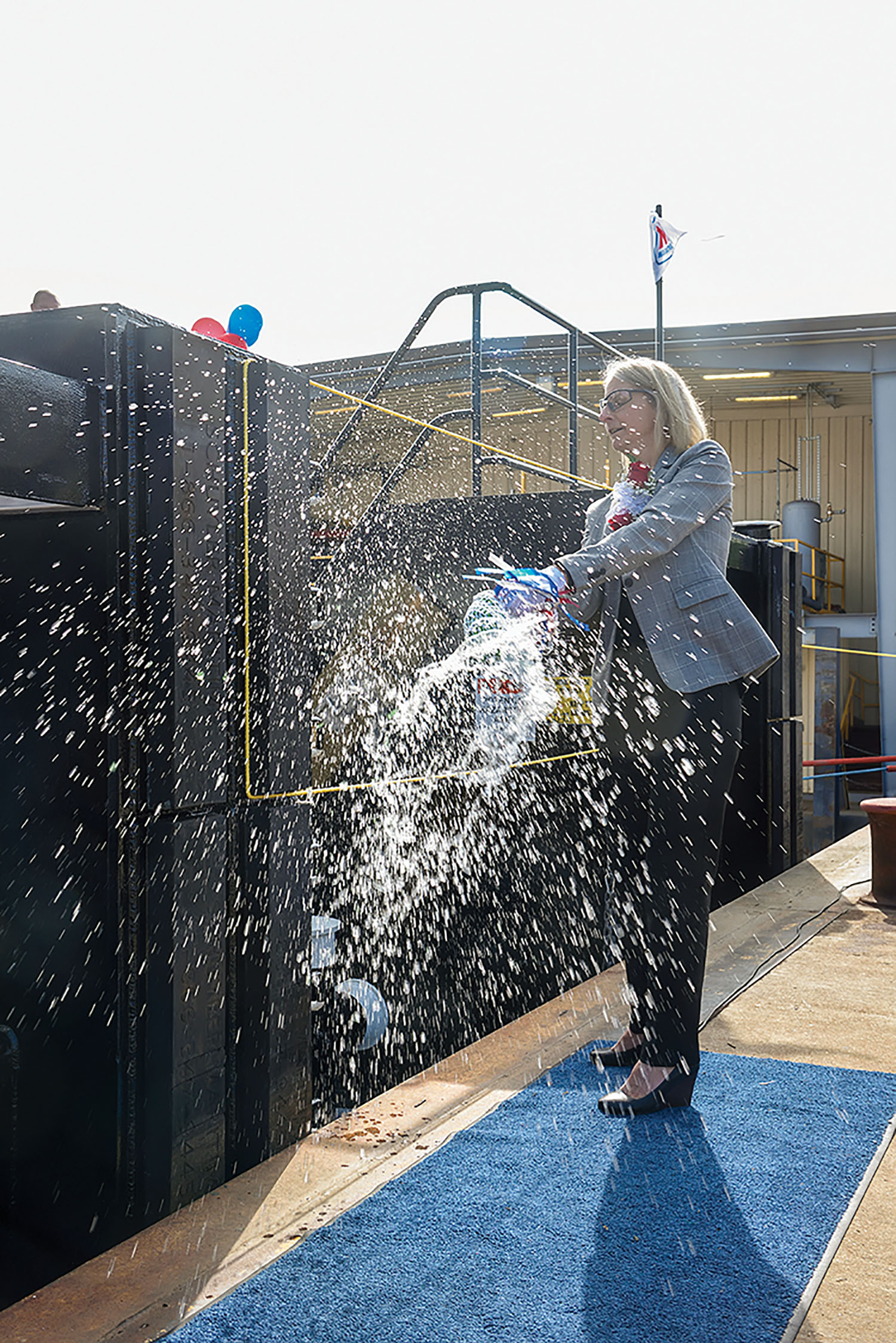 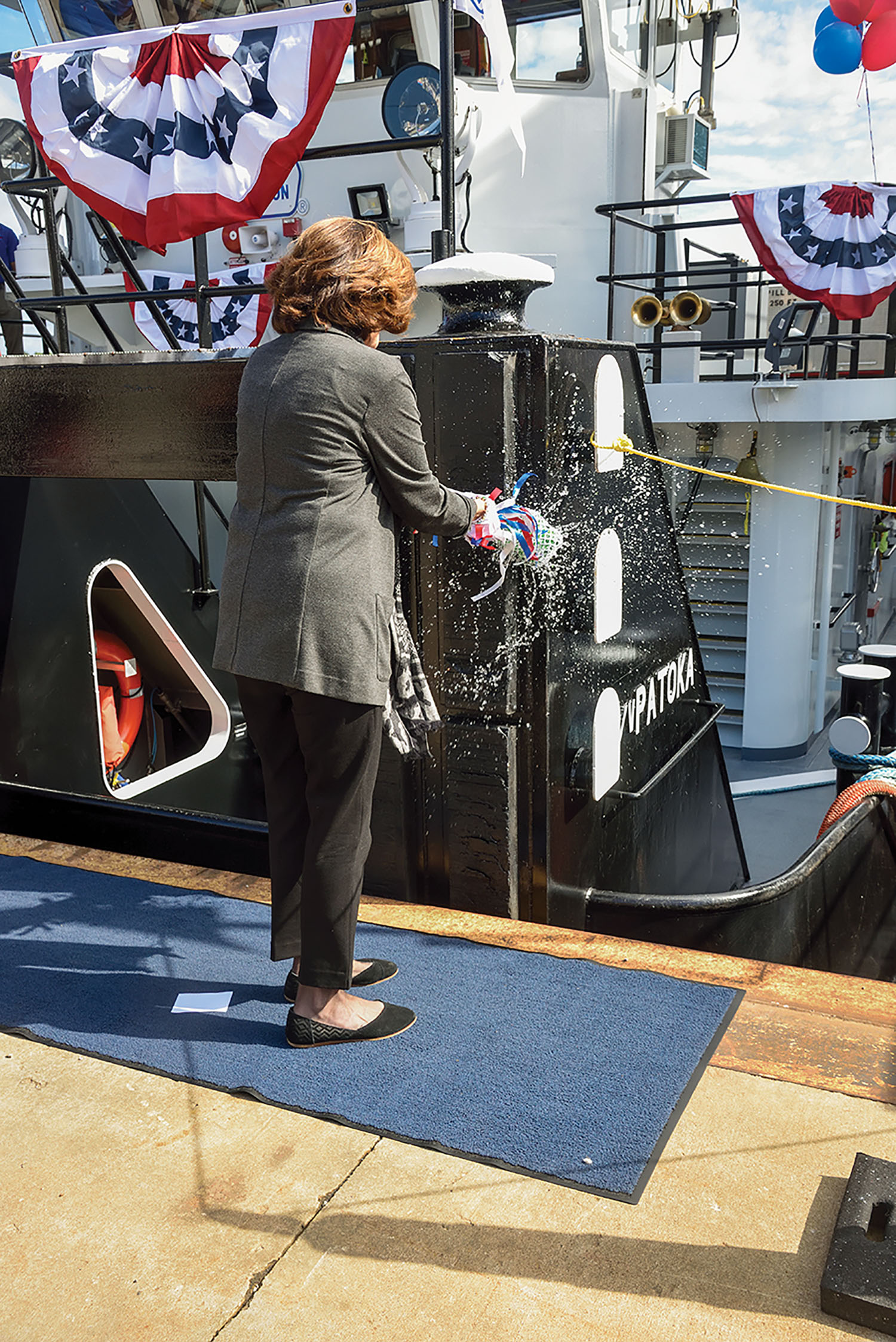 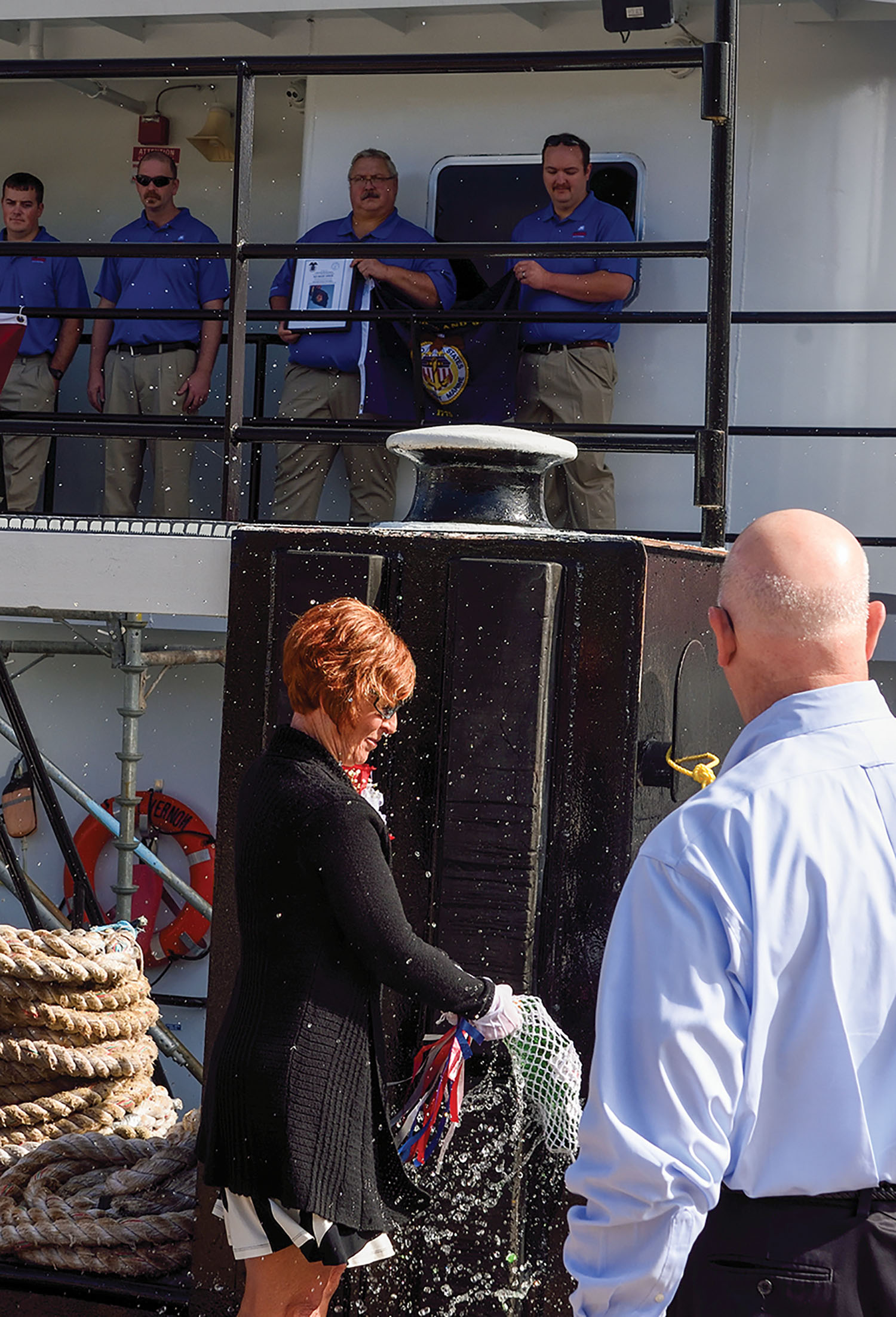