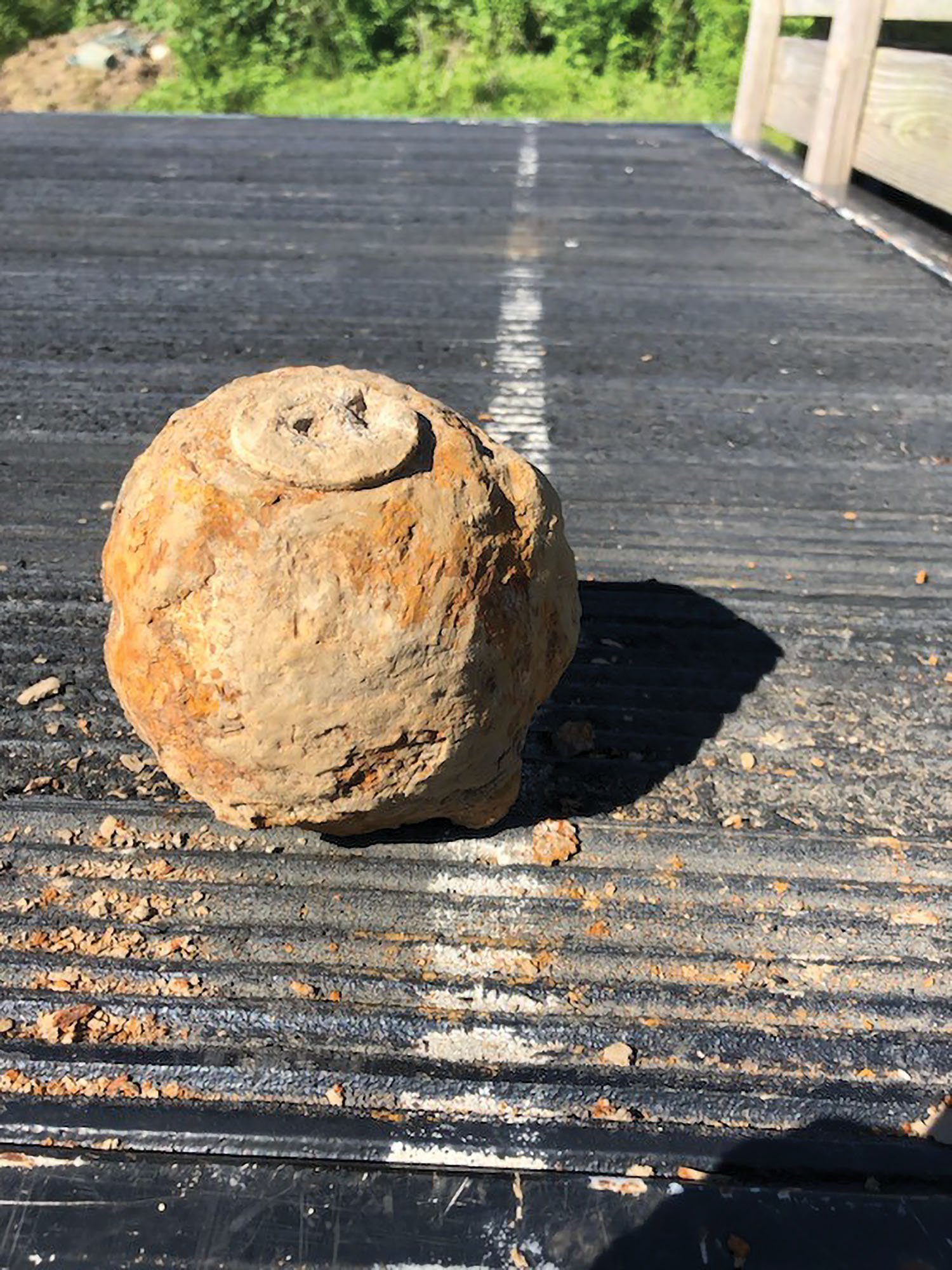 Coast Guard Team Discovers ‘Blast From The Past’

On October 23, Chief Petty Officer Jeremy Shaffer and the Coast Guard Aids to Navigation Team New Orleans were working on the west bank of the Lower Mississippi River near Donaldsonville, La., in an area called Smoke Bend.

“A week prior, we’d brushed the entire area with our Caterpillar heavy brush cutter,” Shaffer said.

On that particular Wednesday, the team was surveying the area to clear heavy debris and prepare the site for rebuilding a critical navigation aid consisting of a range board and a light. As the team worked the site, one team member came upon a literal blast from the past.

“One of the guys picked up the ball and was getting ready to toss it aside,” Shaffer said. “I asked, ‘What do you have there.’ He said, ‘I have a cannonball.’”

The team member was just joking about the rusty, highly weathered object, but Shaffer couldn’t shake the feeling that the ball had to be something more than just a wayward piece of trash. To settle his curiosity, Shaffer did what any inquiring person would do.

“I did a quick Google search for Civil War cannonballs, and the first image that came up looked identical,” Shaffer said.

In short order, Shaffer contacted a colleague at Sector New Orleans, who suggested he reach out to New Orleans’ Confederate Memorial Hall Museum, one of the oldest Civil War museums in the United States. From the river batture, Shaffer called Richard Angelico, a retired broadcast news reporter who now serves on the board of directors of the Memorial Hall Foundation. Angelico is the artillery expert for the museum.

Angelico helped Shaffer know how to safely transport the artillery shell. Shaffer has since brought the cannonball to the Confederate Memorial Hall Museum.

“It has to go in electrolysis for a couple weeks to remove the rust and stabilize the metal,” Angelico said.

When that is complete, Angelico will drill a small hole into the cannonball and remove any remaining gunpowder. Eventually, it will become part of the Confederate Memorial Hall Museum’s artillery collection.

For now, Angelico said the story behind how the artillery shell got to the Smoke Bend batture is a mystery, but there are several possibilities.

“The most likely way is someone found it in the cane field and tossed it over the levee,” Angelico said.

Finding artillery shells along the river, particularly between Baton Rouge and New Orleans, is far from unusual.

“People have been doing that for years,” he said. “The Union Army went up and down the river between Baton Rouge and New Orleans trying to get plantation owners to sign a loyalty oath to the Union. If they refused, sometimes they’d open fire on them.”

Angelico said, while the 12-pound Bormann artillery shells were designed to explode, a good number of them were faulty and failed to do so, which accounts for the fact they are still occasionally found intact.

The artillery shell could also have been fired during the Battle of Fort Butler, or the Second Battle of Donaldsonville, which was fought in that same area on June 28, 1863. There’s also a chance that area on the river served as a place for offloading supplies, Angelico said.

“Right now, it’s a mystery on how it got there,” he said.

Angelico said he plans to take a team back to the Smoke Bend batture where the artillery shell was found in a couple weeks. Armed with metal detectors, the team will scour the batture in search for other Civil War relics. If the team finds a cache of other Civil War-era artifacts, that will support the theory that the area was a supply point or a point of attack during a battle. If nothing else is there, the more likely explanation is the shell was a wayward volley found in the adjacent cane field and tossed onto the riverbank.

Regardless, Shaffer, a native of West Texas who grew up finding arrowheads, said the discovery is something he’ll never forget.

“I mean, what are the chances you’re going to walk up and find a cannonball?” Shaffer said.

Angelico said that while there’s actually very little chance of an armed Civil War artillery shell exploding, anyone who finds one should contact a nearby Civil War museum or knowledgeable collector.