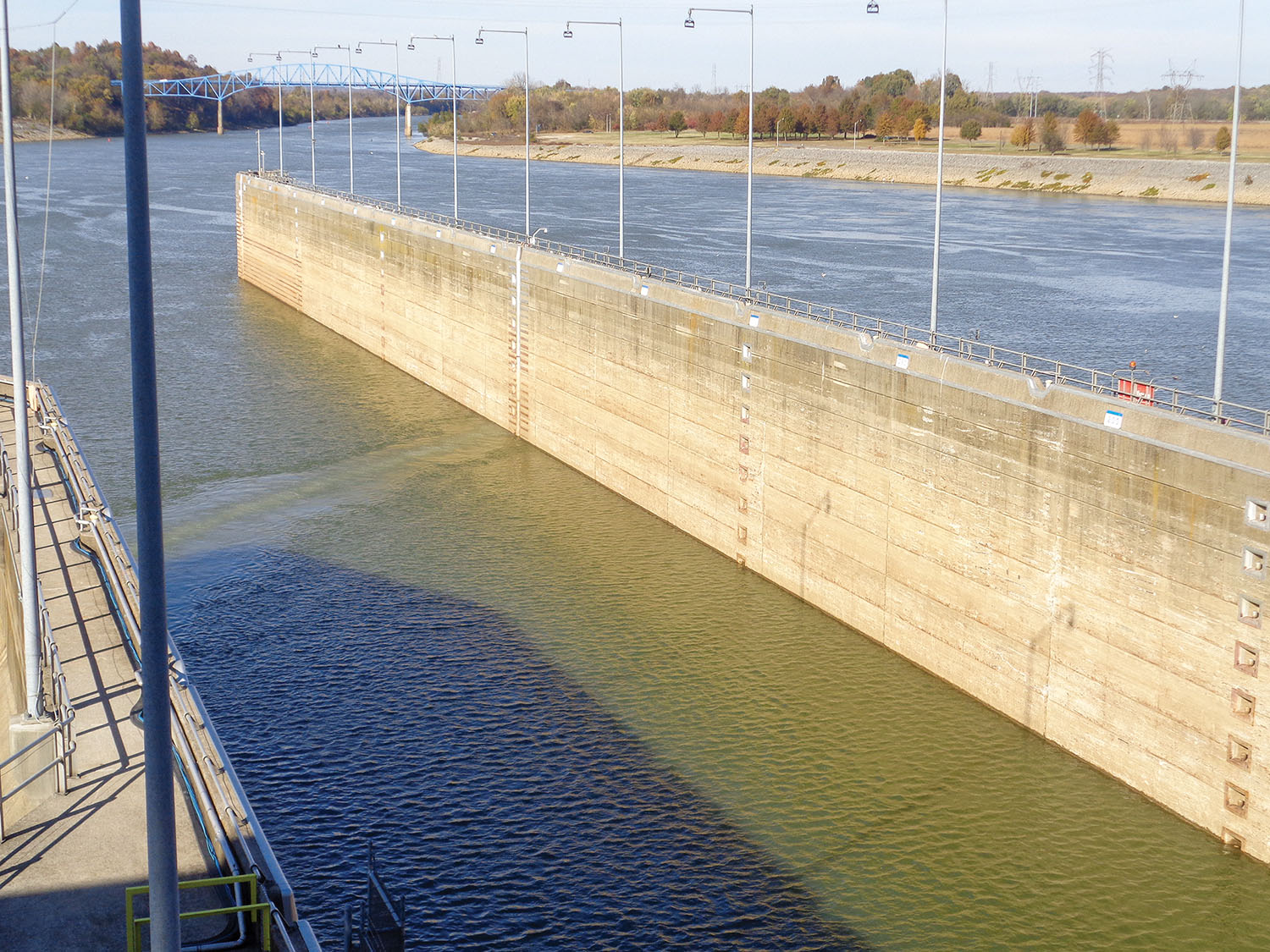 With the push of a button, a low hum sounded, and bubbles rose to the surface in a line crossing the width of Barkley Dam’s lock approach, from the main guidewall to the opposing bullnose.

The BAFF, as industry officials have nicknamed it, traps a low-frequency, rhythmic noise inside thousands of tiny bubbles, said David Lambert of Fish Guidance Systems, which developed the fence. The noise, bubble curtain and accompanying flashing white lights—which officials said may be visible when water is low—should inhibit Asian carp from passing through the Barkley Lock chamber connecting Barkley Lake to the Cumberland River, designers believe. For the next two years, wildlife officials will monitor Asian carp fitted with transmitters to see how the BAFF affects their movements. The BAFF will be turned on for a week and then off for a week throughout the trial period, said Jill Kelley, project manager for the U.S. Army Corps of Engineers.

As to whether it will become a permanent addition, “I think it depends on the results we get during the research,” Kelley said.

The system is custom-designed for Lake Barkley after being tested in a lab setting on Asian carp to make sure both that the carp don’t get used to it and that it doesn’t bother native fish species, Lambert said. The original fish guidance systems were built in association with the British government to guide smolt, or baby salmon, in the Severn River in the United Kingdom, keeping them away from the entrance of hydroelectric plants. The systems were then used in the Sacramento River in California to keep fish out of irrigation channels. Because the BAFF is housed in concrete below the depth of the lock sill, it should pose no danger for tows approaching it, according to the U.S. Fish & Wildlife Service.

USFWS officials were looking for a location where big head and silver carp, two species of Asian carp, were already present and could not swim over a dam during high water conditions, as well as a location where government officials were welcoming of the new technology, Charlie Wooley of the U.S. Fish & Wildlife Service told the roughly 85 people gathered for the BAFF christening.

McConnell termed attempts to combat the carp’s spread as a war, adding, “I’ve been proud to lead the war on Asian carp at the federal level in the Senate,” and crediting Comer with doing likewise in the U.S. House of Representatives.

“I’m proud Lake Barkley was selected to conduct a test of this magnitude,” he said.

McConnell also noted that although there were several places in the country the BAFF could have gone, as the only one of four congressional leaders not from New York or California, he is in a position to help middle America and his home state. “It makes a difference in projects like this and many others,” he said.

The BAFF should help prevent carp from continually coming into the lake, McConnell said, adding that he is also hopeful the new “unified fishing method” helps to then remove them in greater numbers. The method involves using electronic technology to corral carp before extracting them with specialized nets. The U.S. Geological Survey has used the method in Missouri and Illinois.

“We’ll be back in a few months to deploy that as well,” he said.

McConnell said Congress has dedicated a record amount in the budget to combat Asian carp.

“These waters, as we all know, are integral parts of our economy and our heritage,” he said.

“This is something that has to be done,” he said. “The economic impact of the lakes in this region is immeasurable.”

Maj. Justin Toole, deputy commander of the Nashville Engineer District, also spoke of the lake’s economic and recreational value, noting that the dam was built in 1966, and that each year, 3 million visitors spend time on Barkley Lake.

Ron Brooks of the Kentucky Department of Fish & Wildlife Resources, said the reach of the BAFF is likely to extend well beyond the lake.

“It’s really true that although we’re testing this here, it has ramifications up and down the Mississippi River basin.”

Brooks added that after seeing the results of lab tests, he is “very optimistic” about the BAFF working at Barkley Lock.

Already, he said, carp are being harvested out of the lakes and the nearby rivers at the rate of 5 million pounds per year. “Unfortunately, they’re coming in by the lock chambers and mitigating our efforts,” he said.

“I hope we can find out quickly if this is going to be successful so we can use this in other areas as well,” he said.

Finally, Lyon County Judge-Executive Wade White said that the ceremony would not be complete without paying tribute to the commercial fishermen working in the cold and pulling on nets to remove the carp.

“This is an awesome tool we can give them so they can win the war on carp,” he said.

Caption for top photo: Diagonal line of bubbles across lock chamber shows the location of the Bio-Acoustic Fish Fence at Barkley Lock. (Photo by Shelley Byrne)