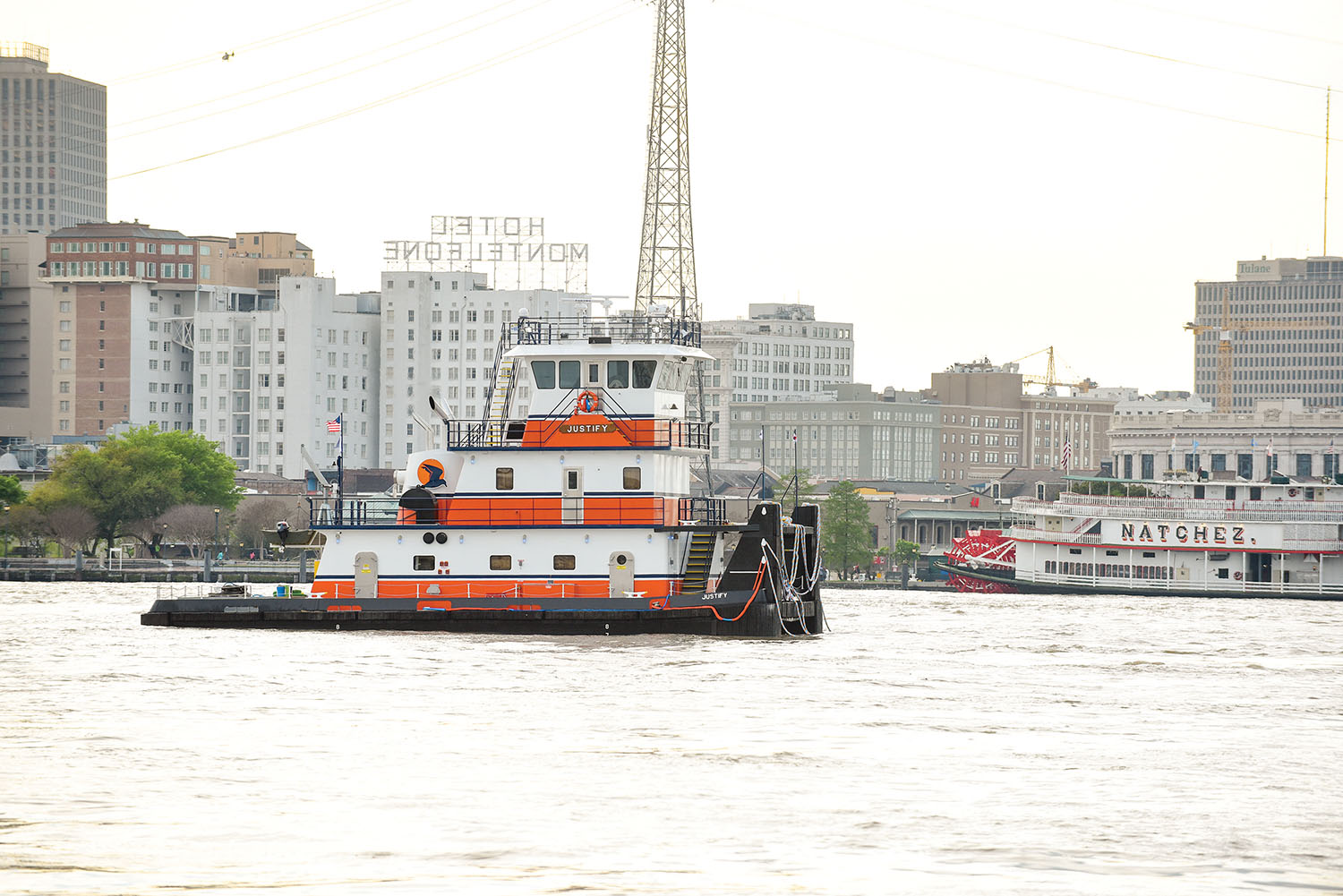 New Orleans, La.-based Turn Services is in the midst of a major towboat fleet expansion, with three new vessels in service and three more soon to follow.

“We really took the opportunity to look at our fleet and, specifically, some of the new business markets we’ve been getting into on the liquids and petrochemicals side of things,” Turn Services President Mario Muñoz said. “With some of the regulatory factors we’re seeing, not only with Subchapter M but also with vessel requirements from some of our customers, we found it prudent to build new vessels.”

All six will be live-aboard vessels, with the 2,000 hp. vessels going on charter for towing on both the Mississippi River and the Gulf Intracoastal Waterway. Eymard has delivered three 2,000 hp. vessels: the mvs. Justify, California Chrome and Count Fleet.

Those vessels all measure 72 feet by 30 feet and feature 2,000 hp. Justify and California Chrome feature a pair of Cummins QSK38 Tier 3 diesel engines, while Count Fleet has twin Caterpillar C32 Tier 3 engines. All three vessels feature Twin Disc MGX5321 reduction gears at a 5.96:1 ratio and four-blade stainless steel propellers with a 74-inch diameter and 58-inch pitch. Justify, California Chrome and Count Fleet are all equipped with a pair of John Deere 65 kw. generators. The vessels have accommodations for up to six crew members.

The fourth 2,000 hp. vessel in the queue for Turn Services is the mv. Bold Venture.

The two 1,600 hp. boats Eymard is building for Turn Services will carry the names mv. Nyquist and the mv. Curlin. Those vessels will measure 68 feet by 28 feet and carry Caterpillar C32 main engines, the same Twin Disc gears as the 2,000s, propellers with a 72-inch diameter and 60-inch pitch, and John Deere 65 kw. generators.

Nyquist won the 2015 Breeders’ Cup Juvenile race and the 2016 Kentucky Derby. Curlin, winner of the Preakness Stakes and Breeders’ Cup Classic in 2007 and the 2008 Dubai World Cup, is named after Charles Curlin, a former slave who fought for the United States Army during the American Civil War.

Eymard delivered the Curlin in September.

Muñoz said Turn Services will be able to use those 1,600 hp. vessels in a wide variety of ways.

“Those really provide us with a lot of utilization, both from a charter perspective and from an in-house use perspective,” he said. “Those boats can do a little bit of everything. They can push two tank barges on the Intracoastal Waterway. They can take standby jobs one job at a time downriver. Also, as needed, we can swing them into the fleet as supplemental fleet horsepower. Their being live-aboard gives us a lot more utilization for those types of activities.”

Mike Marshall, senior vice president of operations for Turn Services, said the partnership between Turn Services and Eymard has been outstanding.

“It’s not just convenience—Gary [Eymard] is a very responsive builder,” Marshall said. “Gary’s on the yard in the morning, and if you go in the afternoon, he may be in a crane hanging steel.”

“Really, it was a decision based on safety,” Muñoz said. “We wanted a uniform fleet, so that a stevedore or whomever uses those boats on a daily basis could go from one boat to another and not notice any difference.”

“The 45-foot boats will allow us to carry supplies, service Associated Terminals and provide third-party service to whomever needs it,” Muñoz said.

Marshall said the crew boats will also assist in some towboat and midstream crew changes, allowing fleet towboats to focus on shifting barges.

Turn Services also recently announced an agreement to purchase the assets of Jubilee Towing, including three existing vessels and a fourth under construction at Rodriguez Shipbuilding in Bayou La Batre, Ala. Those vessels include the mvs. Unbridled and Charismatic, both 2,000 hp. towboats, and the mv. Moxie, which is undergoing refurbishment at Rodriguez Shipbuilding. The forthcoming new vessel will be a 1,600 hp. live-aboard boat.

As part of the acquisition, the owners of Jubilee Towing, Trevor Lott and Lucian Lott Jr., joined the Turn Services team in business-development capacities.

“The assets of Jubilee Towing are high quality and fit well with our towboat fleet profile,” Muñoz said. “We are extremely excited to have Trevor and Lucian join our team. As we continue to execute our growth plan, we are confident they are excellent additions that will further enhance our business development efforts.”

Finally, Turn Services has just announced its mid-December expansion to the Houston market.

“We’re going to be providing horsepower at InterGulf Fleet in Houston,” Muñoz said. “We will initially have two vessels there. That’s continuing with our growth strategy. It’s the first step outside of our Mississippi River corridor.”

Caption for photo: The mv. Justify went into service in April. (Photo courtesy of Turn Services)