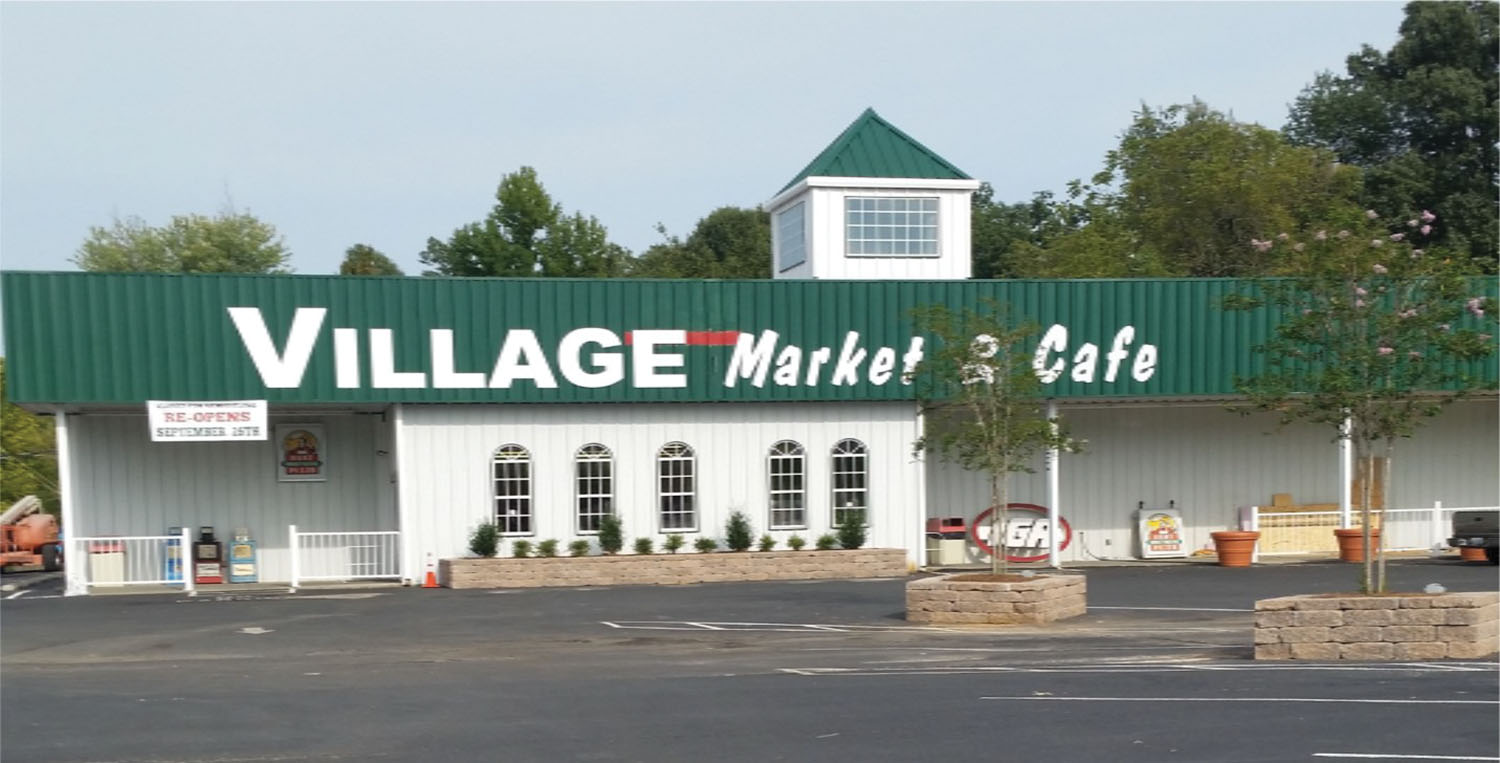 In 1938, J.L DeWeese Sr. opened J.L. DeWeese & Son Grocery in the quaint little village of Grand Rivers situated between the Tennessee and Cumberland Rivers in Kentucky. This was long before Kentucky Dam was built on the Tennessee River, and there were few, if any, grocery stores in this remote area between the rivers. DeWeese and his family operated the small business on Main Street providing groceries to the town folks and farmers in the local area. In 1953, Jay DeWeese Jr. and his wife Nelda took over the operation of the grocery from his father, joined IGA and continued its role as the business center of downtown Grand Rivers.

Construction of Kentucky Dam was started during World War II as part of the war effort and was completed and opened to towboat traffic in 1944. Recognizing that towboat crews eat just like all other folks, Mr. DeWeese began delivering groceries to the towboats as they passed up and down the Tennessee River. One of his earliest and most loyal customers was George Crounse, founder of Crounse Corporation headquartered in Paducah, Ky. Mr. Crounse had two small towboats that delivered coal to the power plants on the Tennessee River. Once, when questioned about his loyalty to DeWeese, he replied that Jay DeWeese and his family had provided food for his crews when he was first getting started and that he certainly deserved to be treated with same loyalty after Crounse Corporation became successful.

In 1978, Jeff DeWeese, the third generation of Grand Rivers’ grocers, and his wife Emily joined in the family business, and in 1994 the family built a brand-new store on the same location as the old store, but with a generous parking lot in front. The new grocery was renamed “Jeff & Emily’s IGA.” Jay and Nelda continued to work with the children in running the new store until Jay’s death in 2008. Nelda stayed at the front desk, greeting every customer who entered the store until she recently retired at age 85. She still visits the store almost daily.

Unfortunately, the new store began losing ground with the coming of several big discount groceries in the surrounding area and then was struck a devastating blow when the national economy tanked in the winter of 2007–08. The towboat industry, one of the store’s principal sources of business, was virtually sidelined during this period. Unable to sustain their family from their cherished grocery store, Jeff left full-time work at the grocery and took the position of manager of the Grand Rivers’ utility system. He continued to work at the family business on weekends while relying on Nelda and Emily to manage the day-to-day operations of the store. As time passed, the store’s financial affairs become ever more discouraging and the DeWeeses came to the conclusion that their only recourse was to give up their business, which had been their love and devotion for three generations.

Although they were unable to see a light at the end of the tunnel, the DeWeeses desperately wanted to keep their dream alive. They turned down offers to sell the property to buyers who intended to change it from a grocery to some other endeavor and kept hanging on.

Local businessman Bill Gary came to their rescue in 2014. Bill had acquired the old marina known as Port KenBar on the western edge of Grand Rivers in 1984 and renamed it Green Turtle Bay Marina & Resort. Over the ensuing years the resort had grown from a small recreational marina into a major area resort with accommodations for over 800 pleasure craft and more than 85 rental condo units on Lake Barkley just above the dam. Having a full-scale grocery within the city was critical not only for the 500 residents in and around Grand Rivers, but also for the hundreds of recreational boats transiting each year down the Mississippi and Ohio rivers to Florida and other southern destinations. Few marinas along the waterways are located within walking distance of a grocery store, restaurants and other retail stores. Gary considered the IGA store critical to his marina customers and determined to buy the store from the DeWeeses and keep it operating as a viable grocery store in Grand Rivers.

In the spring of 2014, Gary and the DeWeeses struck a deal. Gary would buy the grocery and Emily and Nelda DeWeese would continue to work there as long as they desired to do so. Both love the grocery business and the store had been their life’s work since they were young ladies. Nelda recently retired but can be seen shopping in the isles of the store several times each week. Emily continues to be a mainstay in the store and Jeff frequents the cafe often and has been known to step in and help out in the meat department from time to time when his help has been needed.

When Gary bought the store, the entire interior of the store was repainted and decorated anew. Many citizens of Grand Rivers joined together to form an advisory group to help Gary and his wife Bette define the new store and how it should operate. Based upon these community recommendations, Bill and Bette renamed the store “Village Market & Café,” as they truly believed it should always be a community enterprise. They joined forces with Associated Wholesale Groceries, one of the largest grocery co-ops in America. They established exclusive product lines to include certified Angus beef, and fresh frozen seafoods delivered directly to the store from one of Boston’s premier seafood suppliers. In keeping with the new interior of the store, Gary also refurbished the exterior with the new name and new landscaping. A new street sign was also added.

Greg Greene, a lifetime resident of Lyon County with many years of experience in the grocery business, joined the Gary’s as store manager. Together with Emily and Nelda DeWeese they got the store off to a good start bringing in friends and local citizens to run the business. In spite of the renewed investment in the store and the enthusiasm of the Grand Rivers community, the Garys soon came to the realization that capturing the local grocery business was not going to be sufficient to sustain the new store on a year around basis. While tourism, camping and boating during the summer months kept the store lively, the long winter months were bleak indeed. Gary and Greene searched for answers.

Jay and Nelda DeWeese had once grown the business catering to the towboats plying the inland rivers in the Four Rivers area. Why not try this again? They began soliciting grocery orders from the towboat industry with promises of the finest in beef, seafood and dairy products delivered to their boats at in-store, ordinary shelf prices plus a modest delivery fee. They worked long hours to develop this business and to fulfill their promise to the towboat customers. The effort paid off as today nearly 200 towboats owned by more than 20 towing companies have come to rely on Village Market & Cafe to supply their grocery needs while working in the Four Rivers area of the Mississippi, Ohio, Tennessee and Cumberland rivers.

The towboat grocery business, together with the support of the local community, has kept the Grand Rivers’ citizens able to shop in their local grocery without having to deal with the hustle, bustle and traffic of large discount stores. Tom Moodie, long time mayor of Grand Rivers, brags that “No other small town with less than 500 citizens can brag of having a grocery store as complete and well run as Village Market. Our citizens are truly blessed to have such a fine store in our little town.”

Evona Sloma, owner of Nichol Landing restaurant, tells us that “she and three of her children all worked at Village Market from its opening date. When she decided to open her own restaurant in early 2019, Bill Gary encouraged and supported her in the pursuit of her dream.” Her daughter Maggie Wring continues to manage the towboat order desk and her son Maciej works in both the towboat and meat departments. Some 25 local citizens depend on the Village Market for their livelihood and the children of both employees and local citizens enjoy summer employment when school is out. In 2017, Village Market added over 3,000 square feet of additional warehouse space and new walk-in freezers and refrigerators to better serve its towboat customers. Just recently, the market added a brand new 26-foot SeaArk skiff to its towboat delivery fleet.

This holiday season, Village Market & Cafe is showing its appreciation for its towboat customers by offering to them free delivery service for their grocery orders while continuing to maintain their traditional in-store shelf pricing for all grocery items. Both the Gary family and their many community friends and employees are truly grateful for the grocery business of the towboat industry. It has allowed their little Village Market to survive and prosper in the highly competitive grocery world by offering the highest standard of grocery products not offered by the big discount stores.