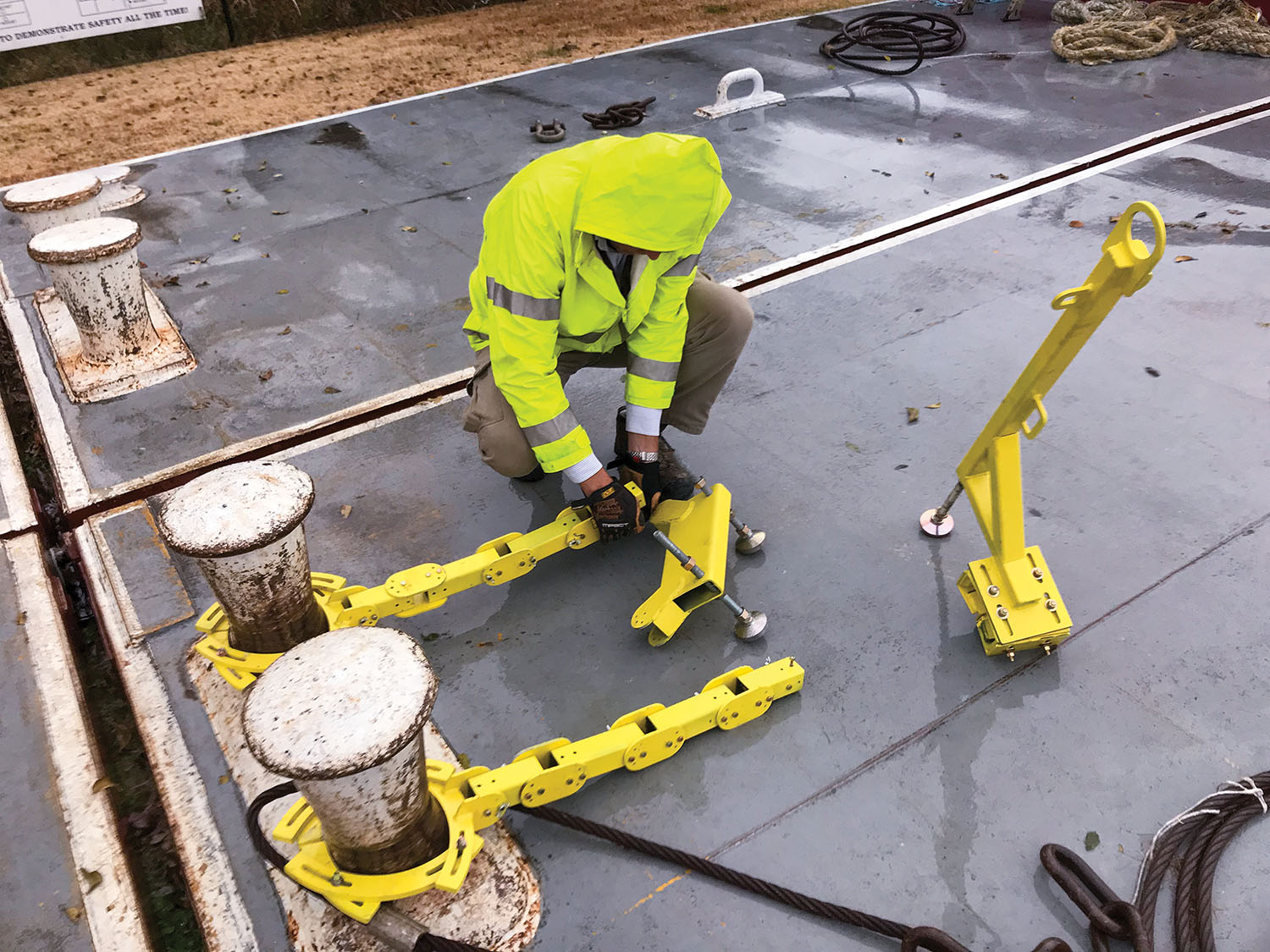 G&C Multi-Services of Paduach, Ky., is marketing a nautical handrail system with one goal: to aid safety on the river.

The company recently announced the patent-protected system, which doesn’t yet have a formal name but is currently being referred to as the AOI handrail system in honor of developer Axis One Industries LLC.

The system consists of a two-part post and positioning system that can be adjusted to fit on any kevel and timberhead configuration and around any existing ground tackle and rigging. It uses an adjustable metal ring positioner that helps hold into place steel posts with adjustable bases. The customer guides the ropes, cabling or safety chain of its choice through metal eyelets part way up and at the top of the posts to create handrails.

Axis One Industries holds the patent for the system, which G&C is marketing, including offering demonstrations of how it works.

“We’re getting the awareness out that this exists, and it’s being prepared to come to market,” said Monte Cryts, a member of Axis One Industries.

“The mobility of this system allows workers to isolate a work area or change the perimeter as tows may change,” according to marketing information provided by G&C. “The interchanging post and positioner system will allow coverage around an entire barge, just the bow of the tow, or smaller work areas. We feel this system, while designed initially to be used on tows underway, can be applied in many areas in the river industry, including shipyards, fleeting areas and distribution platforms. Built with high quality, weather-resistant materials, the handrail system will be a reliable and cost-efficient way to increase the safety of workers in our industry.”

Clint Conway, business development manager for G&C, said the system is the first portable, temporary handrail available for use in the sometimes harsh weather conditions imposed by working on the river.

“Primarily, it was designed for the bow of a barge,” he said.

Over time, he said, partners testing the system realized its advantages in other scenarios, such as to isolate a “duck pond” area where two barges of uneven heights meet.

“If you bump into it, you know I’m on the edge of a barge,” Conway said.

Cryts added that it is quick and simple for crews to install.

“As they build tow, they’ll start adding them in,” he said.

The handrail system is classified as a passive fall protection system. It has been under development for about five years and undergone some voluntary private tests in the field. The system will support the weight of a mariner who might happen to trip, slip or fall, allowing them the possibility of catching themselves before going overboard, Conway said. It is designed to be easily adjustable so that as the tow changes, the perimeter can change.

Axis One studied the main causes of injuries and deaths on the river and determined a system needed to be created to prevent falls overboard, especially near the bow. Such falls are often the result of momentary inattention, despite companies’ commitment to safety and training, Cryts said. The developers of the handrail system think their product is a major part of the solution and may eventually be part of a safety standard within the industry.

Pricing for the handrail system has not yet been established, but those interested in a demonstration may call G&C at 270-443-6077.

Conway hopes that the new system generates interest, saying, “Even one fatality is one too many.”