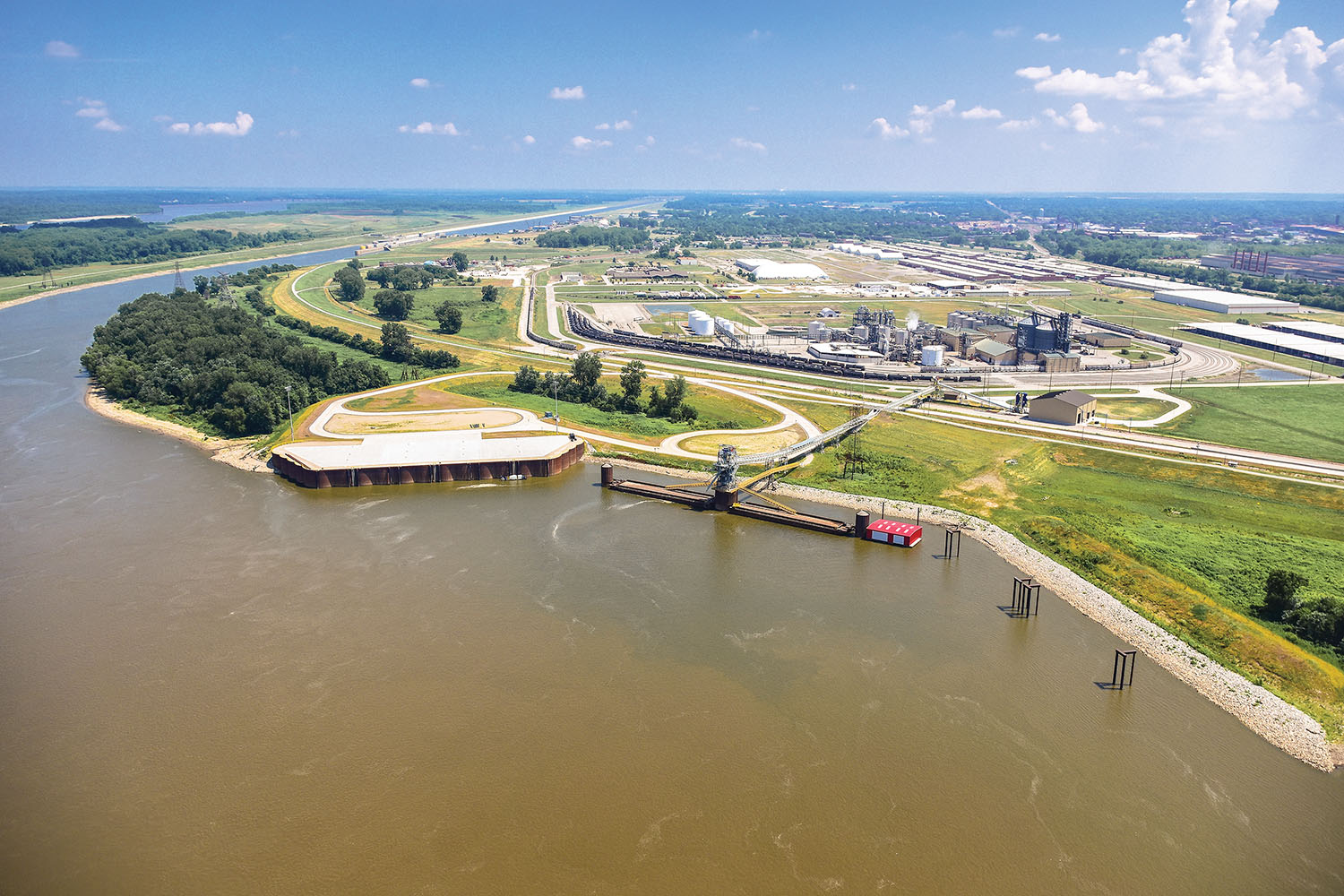 America’s Central Port is finishing out its 60th anniversary year by continuing its steady strategy of growth, transformation and diversification.

Centrally located with access to four U.S. interstates, six Class-I railroads, 30 miles of rail, two multi-modal harbors, warehousing and 100 acres of development-ready land, the port serves manufacturers across the food, fiber and energy supply chains and is a key component of what has been dubbed “America’s Ag Coast.”

Located in Granite City, Ill., across the river from St. Louis, Mo., the port benefits not only from its unrivaled central location, but from being part of the “Ag Coast” network of port facilities, grain terminals and elevators that are so dense in and around St. Louis. Apart from grain, the St. Louis region is an increasingly important logistics node for many other commodities—and America’s Central Port is playing a key role in that network.

The Tri-City Regional Port District—a special-purpose unit of government that operates within its own means without collecting tax revenue—was created by the Illinois state legislature on April 1, 1959. The port’s founders wanted to take advantage of a recently-completed project, one of the Corps of Engineers’ most complex and costly to that date: the Chain of Rocks Canal and Locks No. 27, which together neutralized what had long been an obstacle on the river, the Chain of Rocks, a 17-mile long chain of potentially deadly rocks along the bed of the Mississippi River north of St. Louis.

The Chain of Rocks was the only such natural obstruction on the river between the Twin Cities and New Orleans, and St. Louis business interests had long urged the Corps to address it. The Chain of Rocks Canal was completed in 1953.

Today, Locks 27 moves more cargo than any other navigation structure on the Mississippi River.  America’s Central Port straddles Locks 27, with harbors on both sides.

The advantages of the port’s location were soon clear. In 2011, its current executive director, Dennis Wilmsmeyer, led an effort that culminated in the port renaming itself as America’s Central Port, to reflect its expanding position and significance.

Earlier this year, the port rolled out a new, friendlier and upgraded website, americascentralport.com. One question it asks visitors: “Maybe you’ve heard of Chain of Rocks Bridge, but did you know the reason it got its name is the same reason America’s Central Port is able to transport $1.1 billion in freight annually?”

According to the most recent figures on its website, the port’s tenants provide 900 full-time jobs and have an annual economic impact of $282 million on the local economy. The port is part of Foreign Trade Zone 31, which includes 12 Illinois counties. The port is one of three so-called “magnet sites” within this zone; the others are the Mid-America St. Louis Airport, a major air freight hub; and the Gateway Commerce Center, a 2,200-acre warehouse and distribution park with immediate access to four major interstate highways. Located on site are third-party logistics and trucking companies providing shipping and supply-chain options.

Despite this year’s disruptions of waterborne traffic from flooding and high water, Wilmsmeyer told The Waterway Journal, “We’re still on par with last year’s volume, maybe even slightly ahead.” He added, “We’re seeing different commodities than we have in the past.”

This year, the port marked a milestone in state funding of freight projects by hosting the first project to be completed under the Illinois Competitive Freight Grant Program: its project to revitalize the Granite City Harbor general cargo dock.

The port has two harbors; the newly opened Madison Harbor is just south of Lock 27, providing open river barge navigation straight through to the Gulf of Mexico. The Granite City Harbor is a year-round 24-hour slack water operation, handling 2,500 barges and 3 million tons of product each year, including goods such as grain, fertilizer, steel, chemicals and other bulk freight.

Awarded $1,092,130 with a $275,000 match on the part of the port, this project will increase last-mile efficiency, reduce freight bottlenecks within the port and enhance the intermodal connectivity of the Granite City Harbor. The project consists of upgrading the general cargo dock, which plays a key role in the movement of about 3.4 million tons of steel, general cargo and dry bulk fertilizer each year.

The port estimates the project impact will increase daily through traffic by 60 percent, with an estimated 1.5 additional barges loaded each day, removing 31,500 long-haul trucks from the road each year.

The improvements come after the port spent roughly $1 million last year in the same area on pile fenders.

“SCF has been doing a phenomenal job operating the port,” said Wilmsmeyer. A member of the SEACOR Holdings Inc. family of companies, SCF provides integrated river transportation and logistics throughout the United States and in South America.

The multimodal port is also making great progress repurposing the legacy buildings left over from when the site was a military base, Wilmsmeyer said. The coming year will be devoted mostly to landside projects as the port will be renovating two buildings for new tenants.  An old steam plant with 7,000 square feet of space will be renovated to house a “small, light manufacturing facility.”

In a larger project, a former locomotive repair shop with 40,000 square feet of space will have its roof replaced and be expanded to accommodate 120,000 square feet, in addition to having its utilities improved. These renovations will leave few of the original buildings left, including an old commissary that hasn’t yet been transferred to port ownership.

The port recently signed a lease deal with lumber and wood products company Boise Cascade to provide 10 acres of property for a laydown area, plus warehouses. Some of the wood products will be temporarily stored there, to be shipped elsewhere, while some will stay in the region.

In June, the port will build a sixth entrance and turnout lane off Illinois Route 3.