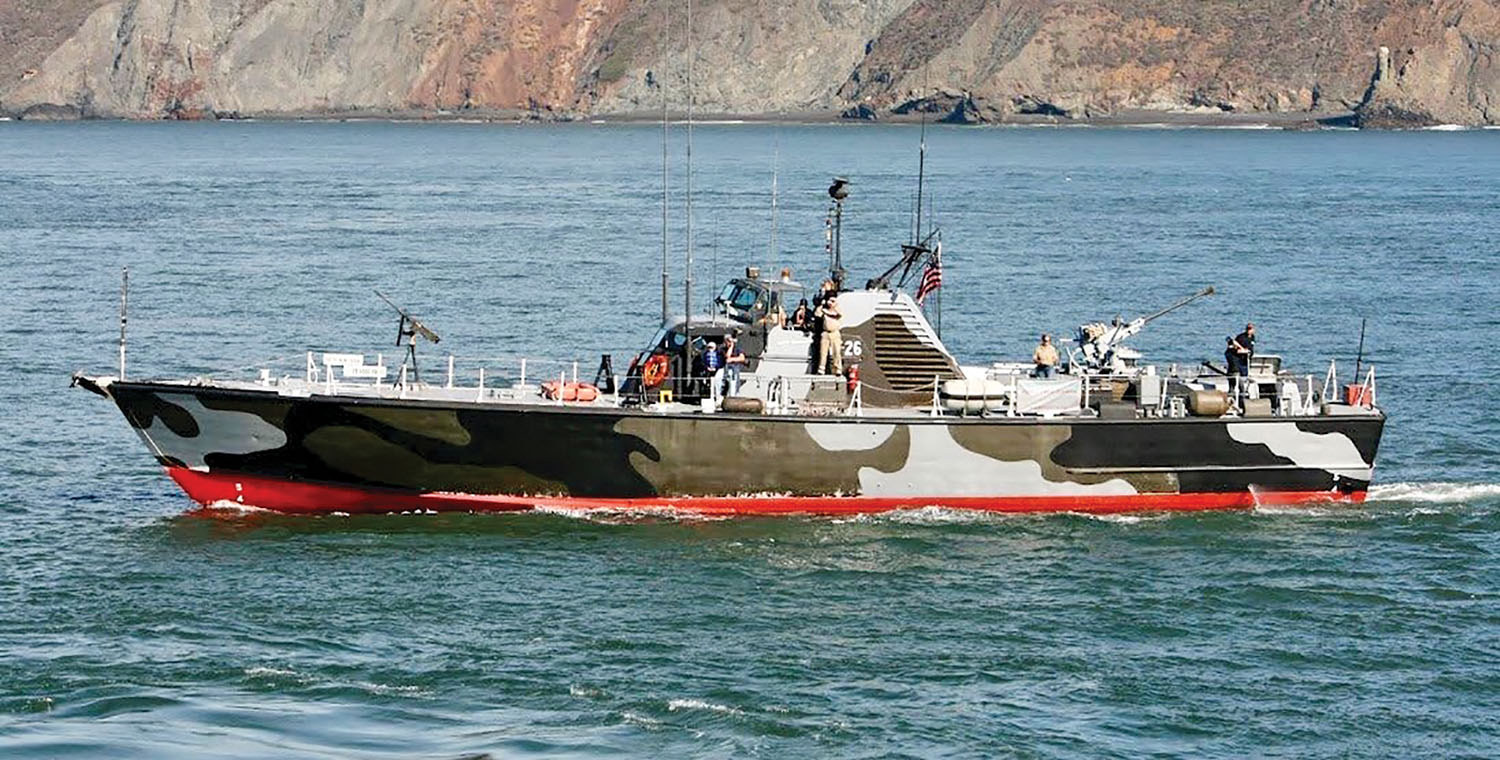 PTF Boat To Train Chaplains, Scouts … If It Can Catch A Ride

The last of the Vietnam War-era fast patrol boats is seeking a new home in Paducah, Kentucky, for use training chaplains and sea scouts.

“We’re going to be using her to open doors, to inspire and inform,” Baldridge said. “Kids of any age who look at this vessel can’t help but be captivated.”

There is one major problem, however. They have to figure out a way to get the boat from Sacramento, Calif., where it is moored, to the Gulf of Mexico before it can travel on its own hull through the river system. Although the men had originally talked about taking it alongside another ship through the Panama Canal, they eventually decided such a journey would be fraught with peril for a smaller antique boat.

“We have the wherewithal to purchase it,” Baldridge said. “We just can’t get it where we need it to be.”

They are hoping a boat with room on its deck might come forward and offer to haul it as deck cargo, but so far haven’t had any takers. The U.S. Maritime Administration put out a notice to Jones Act carriers, but none responded, Baldridge said. Yacht transport, at $100,000, is much too expensive, he said.

“Your headline should say, ‘Viet vet looking for a lift,’” Baldridge joked.

PTF-26 is one of four Osprey class, 95-foot aluminum PTF boats ever built, and it is believed to be the last one that survives. According to the American Heritage website, the boat was designed with nine separate watertight compartments and can withstand holes in two of them below the waterline without sinking. All openings to the outside can be completely sealed to keep water from entering. The stack houses the air intake to the engineroom so that even in rough seas, the engines are protected from waves and spray. Originally, PTF-26 had two 18-cylinder Napier Deltic diesel engines, each 3,100 hp., which during a time trial in the 1970s brought the boat to a top speed of 51 knots. Two tall single-sideband antennas stick up approximately 45 feet off the water.

The website of the Liberty-Maritime Museum, the boat’s most recent owner/operator, notes the PTF boats were the Vietnam War version of the famous PT boats used in World War II. They were built as heavily armed near-coastal gunboats once used mostly by special forces. A crew of 19 would have originally manned the boat and operated its weaponry.

PTF-26 was delivered to the Military Assistance Group in DaNang, Vietnam, in 1968. With the drawdown of forces beginning in 1971, the Navy used the boat for patrol, training and equipment testing. The boat then served first as part of Coastal River Squadron One in Coronado and then at the Pacific Missile Test Center in Port Hueneme, Calif. The boat was released by the Navy in 1985, then brought back for further service from 1987 to 1990.

Since 1998, however, PTF-26 has had a civilian mission. The boat has served as the nation’s first and still the only all-female Sea Scout ship, training Sea Scouts in northern California, Rice said. The boat has helped them receive the training they need for entry into maritime and service academies to pursue maritime careers. Baldridge and Rice are eager for the boat to continue that mission, training young women interested in these careers.

After close to two years of planning, Baldridge and Rice have made an offer, which was accepted, to obtain the boat. Although details of the purchase are private, the boat is valued at $2.9 million, Baldridge said. They hope to moor the boat at Paducah’s planned excursion pier.

“She will be the first and for a while certainly the only maritime training ship operating on the inland waterways,” Baldridge said.

Baldridge recalled the former Merchant Marine Chaplain Corps, which once operated as part of the United States Maritime Service. Although the USMS chaplaincy became moribund more than 50 years ago, there is a continuing urgent need for skilled, trained chaplains to serve merchant mariners, he said. He sees PTF-26 as an ideal way to train the next generation of chaplains, both for Seamen’s Church Institute and scores of North American Maritime Ministry Association affiliates across the United States and Canada. Baldridge envisions the creation of a 21-day residential chaplain school on the boat annually.

“The whole idea is they would experience the life of the people they are going to serve,” he said.

Chaplain candidates would stand watches and experience living in close quarters with their shipmates.

“Pretty much every towboat on the river would want a visit by a chaplain coming alongside in such a big, beautiful PT boat,” Baldridge said.

Additionally, Baldridge hopes to use the vessel in area youth programs, including for three units of Sea Cadets, one unit of Sea Scouts and 11 Naval Junior ROTC units along the Tennessee River’s 652-mile length.

“The beauty is they don’t have to come to us, necessarily” Baldridge said. “PTF-26 can travel to their town. For the weekend, they become the PTF-26 crew and part of history.”

Baldridge also envisions offering seasonal programs to the public and will maintain capability for the boat to be used as a mobile command post in case of disaster.

Caption for photo: In its most recent role, PTF-26 has served as a training ship for sea scouts in northern California.