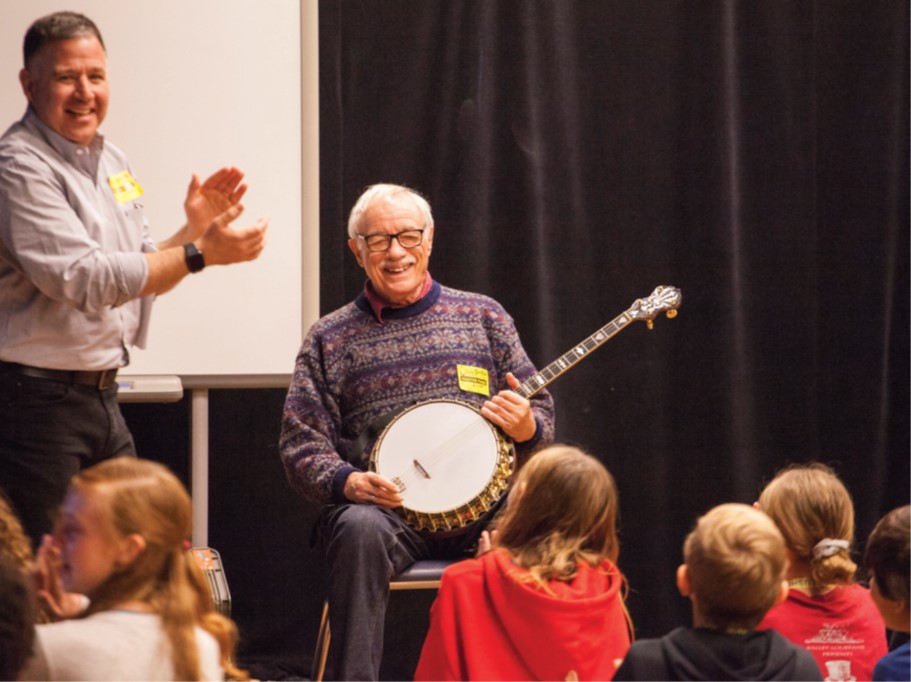 The call echoed through Mr. Martin’s theater classroom at the upper campus of Lusher Charter School in New Orleans, La. Matt Hahne, vice president of USI Insurance Services, stood in the middle of a room of more than 120 students with one hand cupped around his ear, as if straining to hear the chuffing of a distant steam engine. He then suddenly pointed in delight at the sight of an approaching steamboat. In the background, Neil Unterseher, longtime New Orleans musician and Hahne’s father-in-law, strummed a staccatoed tune on his banjo.

The scene transported the students back to the 1840s on the Mississippi River, the historical setting for Mark Twain’s classic novel, “The Adventures of Tom Sawyer,” which the 6th graders just finished reading.

“We’re here to talk to you today about why you read Tom Sawyer and why it’s so important,” Hahne said to the students. “And we’re going to do it by talking about steamboats, about the Mississippi River that rolls by not far from here. And we’re going to talk a lot about freedom and doing the right thing—two really big themes in the book.”

Hahne first asked the students to name their favorite scenes from Tom Sawyer. Hands shot up, and the kids named the murder scene, Tom whitewashing the fence, the cave scene and the Injun Joe character. Winding through the book, like a thread holding the story together, is the Mississippi River. The same holds true today, Hahne said.

“Water and the rivers connect us all globally,” Hahne said. “For Huck and Tom, that river meant freedom.”

Hahne went on to outline the history of the maritime industry in the United States and the enormous role rivers and ships have played in the history of Louisiana. Hahne mentioned the advent of steam power in the early 1800s and early steamboat feats, like the steamboat New Orleans traveling from Pittsburgh, Penn., to New Orleans in 1811—a trip which even corresponded with the New Madrid earthquakes that changed the course of the Mississippi.

One name that proved especially familiar to the students was that of Henry Miller Shreve, for whom the city of Shreveport, La., is named.

Hahne emphasized the importance of knowing and learning from history.

“We can’t possibly know who we’re going to be or where we’re going without knowing where we’ve come from,” Hahne said.

Hahne added that the major themes of Tom Sawyer—freedom and the determination to do the right thing—are crucial for kids coming of age.

“I think those are two very important themes for a young adult at the ‘tween’ level,” he said. “The freedom part is easy, but the ‘do the right thing’ part can’t be said enough, and so why not show them it was a theme way back then too? Was Tom a mischievous kid? Sure, but this book shows you can both be mischievous and do the right thing at the end of the day.”

To close the Tom Sawyer session, Unterseher played a few numbers for the students, including the classic song “Ol’ Man River.” While the lyrics of “Ol’ Man River” have changed over the years, Unterseher said, the song remains focused on the steady presence of the Mississippi River through the centuries.

The look of the boats and industries on the rivers may have changed over the years, but “ol’ man river, he keeps rolling along.”

This year, students heard from Dianne Honoré, a local tour guide and historian, who spoke on the origins and realities of slavery in early Louisiana. In years past, they’ve also had the chance to meet professional mariners, including renowned captain Joy Manthey. This was the 12th year Hahne has led the “Steamboatin’” day at Lusher.