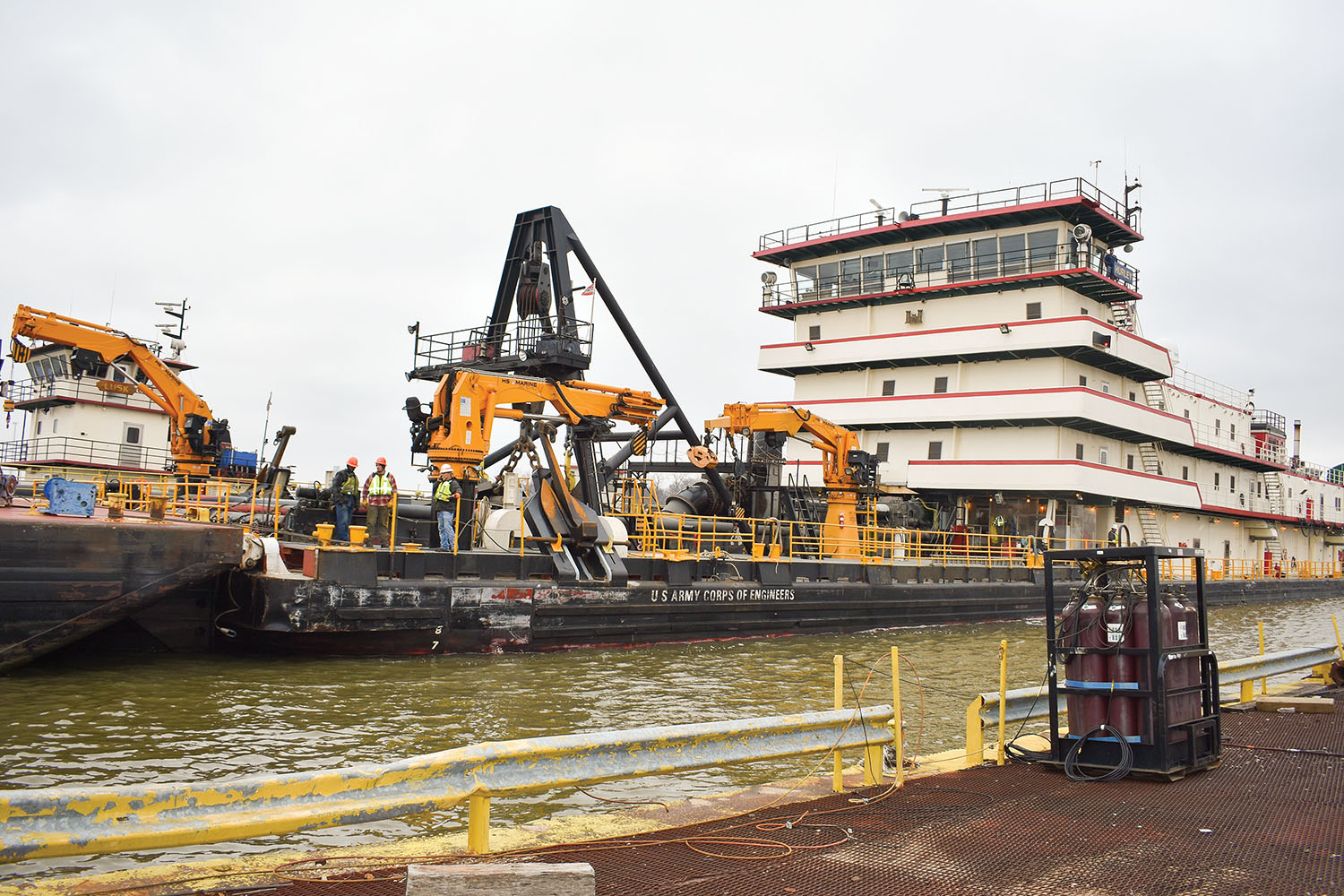 On December 9, the Memphis Engineer District’s dredge Hurley returned to its home port at the Ensley Engineer Yard in Memphis Harbor. The Hurley dredged more than 12.5 million cubic yards this season, ending the two most productive dredging seasons in the vessel’s history.

Last year, the dredge Hurley also dredged a little less than 13 million cubic yards of sediment. On average, the dredging season typically removes between 7 million and 9 million cubic yards. The area has experienced above-average water levels for the majority of the year, which increases sediment shoaling. The higher the water, the more material that will travel further down the Mississippi River. Some areas of the Lower Mississippi shipping channel have been authorized from a 45-foot depth to 50 feet, so some capital dredging has also increased annual sediment amounts.

Over the winter, the dredge will remain in Memphis for maintenance work. After about six to eight months of dredging, all that material—the finer sediment in the lower river and the coarse, dense sand found up north—wears out the equipment from the inside out. Capt. Adrian Pirani, master of the Hurley, said the crew does a lot of cutting and replacing of worn pipe and pump parts.

The dredge was originally built in 1993 and could dredge up to 40 feet deep. “After a few years in service, everyone realized there was a need to lengthen the dredge to dig deeper to help big water commerce on the lower end of the river,” Pirani said. In the late ’90s, the Corps began developing plans to lengthen the dredge from 205 to 353 feet, in order to dig up to 75 feet deep.

Over nine months, the Corps lengthened the 11-year-old Hurley and installed a longer ladder, a steel frame arm supporting the suction head. The dredge was lengthened by slicing off the front section of the vessel, installing enormous steel sections to add length and strength, and welding it back together. The work was done in-house at the Ensley yard and completed in June 2010. Pirani said the previous season, crew members did what work they could onboard while the vessel was still in operation, such as electrical work. “It was a successful campaign, and there have been no issues ever since. Still running like a dream,” Pirani said.

In the off-season from 2016 to 2017, the Corps added an underwater booster pump to the front of the dredge, just behind the dustpan, which was the first of its kind at the time. “It puts the source of the suction below the water surface, right above the material, so it makes it much more efficient,” Pirani said. He said the new pump boosted production by about one-third. “After adding the underwater pump, our production on average went from 75,000 cubic yards per day, on a 24-hour day and about 250 feet of linear advance on a 10-foot face, to afterwards, 100,000 cubic yards per day up to about 324 linear feet of advance on a 15-foot face,” Pirani said.

Pirani has been working on the dredge since January 2010. He’s responsible for keeping the daily operations running productively and safely, whether out dredging or tied up at the dock for maintenance and repair. He oversees a crew of about 50 and says their work is very focused on helping crew members advance internally through licensure or on-the-job training.

The Dredge Hurley is focused mainly on maintenance work in the middle and Lower Mississippi River, but in times of need, the dredge has worked all over. After a flood in 2011, the Hurley left Memphis in the spring of 2012 and didn’t return until February 2013. In addition to the Memphis District, Pirani said the dredge worked for the St. Louis, Vicksburg and New Orleans districts during high water events. A few years ago, the Hurley also did work for the Louisville District at Omsted Lock to help the construction project there.

Of the river conditions, Pirani said, “It’s always changing. It’s ever changing. And it can change as quick as overnight,” he said. Before the recent flooding and high water, the river was experiencing low water issues, which can increase dredging needs too. Generally, though, Pirani said, high water causes more issues for sediment and increases the need for dredging, more than low water. “With all the revetment work and the dykes, and the channel improvement plan, at low water the river can maintain itself with the exception of some trouble spots,” Pirani said. But high water, especially prolonged high water, presents the most problems or sediment accumulation.

Last year saw some very high water levels on the Mississippi River. Pirani said that when the Hurley left in May 2019, it had to remove some masts off the top of the wheelhouse to make it under a bridge in Vicksburg. The water was 10 feet above flood stage, and the dredge made it under the bridge with only about 7 feet of clearance.

This off-season, the dredge will go to a private industry drydock for work to replace air conditioning and heating units and the marine sanitation device and restrooms. Pirani said it’s a big project and the Corps needs the dredge ready for service next season, so it will contract out the work. The bid for that work has yet to be released, but should be coming in early 2020.

The dredge Hurley is a 353- by 108-foot dustpan dredge. Its two 1,500 hp. motors drive pumps that can remove as much as 5,000 cubic yards of sand and sediment from the river bottom each hour using a vacuum-cleaner type head. High velocity water jets loosen the material, which is then drawn up by the pumps and into the pipeline. The dredge deposits material via a 32-inch pipeline, and it can dredge as deep as 75 feet.