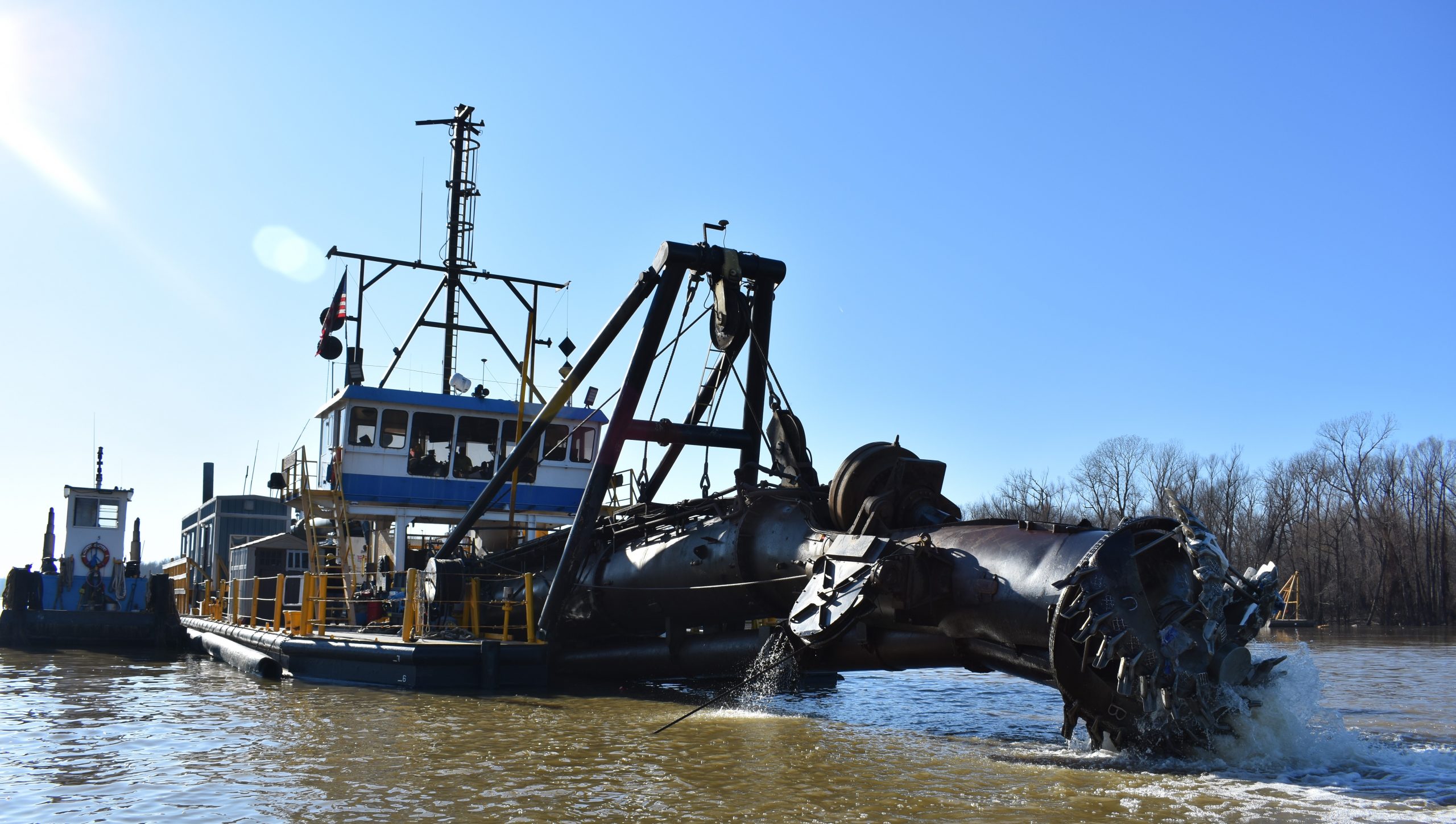 On December 23, Inland Dredging Company wrapped up maintenance dredging at U.S. Army Corps of Engineers inland harbors, dredging 1,289,598 cubic yards of sediment total. The Memphis District awarded the $7,987,200 contract, to dredge 10 harbors in the district. The project was funded through the Corps’ civil works plan with fiscal year 2019 funds.

The Memphis District originally awarded the contract in 2018, and 2019’s work was a second-year option on the contract. Similar maintenance work was done in 2018 for a $8,995,200 contract, and 2020 could include a third-year option for dredging.

Vickie Watson, operations project manager for the Memphis District, said the contract is for the rental of a fully operated hydraulic cutterhead dredge and attendant dredge plant, including discharge pipeline. Bid items include rental by the hour, towing upstream and downstream by mile, and mobilization and demobilization.

Inland Dredging Company, based in Dyersburg, Tenn., used the dredge Integrity, a 24-inch cutterhead dredge, along with two small tugboats, 600 and 800 hp.; several barges to carry pipeline; and a subcontracted boat, 1,000 hp., to move from harbor to harbor.

Tim Dyer, project manager at Inland Dredging Company, said the contractor made modifications to the dredge in order to perform the work. The contractor built an idler, or extension barge, that allowed the dredge to swing wider channels. The dredge is also outfitted with a sliding spud to propel the dredge forward, instead of swinging side to side. The work was done at Inland Dredging Company’s Mt. Vernon, Ala., yard. The project took about four months to complete, but the yard had other ongoing projects during that time.

All of the channels in the Memphis District harbors vary in width. The narrowest, Northwest Tennessee Harbor, is 130 feet wide, and Memphis Harbor/McKellar Lake is the widest at about 500 feet. The length of the harbor channels vary from 1,500 feet to 7.5 miles. “We wanted to be sure we could efficiently dredge the harbor with more efficient swings, so [Inland Dredging Company] added a spacer barge,” Watson said.

Inland Dredging Company has done this harbor maintenance work for the Memphis District before, and other maintenance work for other districts. The work requires close coordination to move quickly from harbor to harbor and along with the river traffic. Projects are monitored closely, and equipment moves ahead of projects, as one starts to wrap up. “We track it very closely to know how many days we’ll be there,” Dyer said. “We pre-stage equipment from one harbor to the next, so once a harbor is done, everything else is already down at the next one.” Dyer also gives a lot of credit to dredge Capt. Willy Ford, who has done this maintenance work several times.

Sediment issues exist in these harbors for various reasons, Watson said. “The Mississippi River is a very dynamic river. We can deal with 50 feet of change in the river,” she said. All the harbors are unique in their size, orientation to the river and location (some are tributaries), but generally the mouth of the navigation channel collects the most sediment. For the largest harbors, the sheer volume of water can create other problematic areas. By contract, New Madrid County Harbor is a very small harbor, only 1,500 feet long, but oriented perpendicular to the river, which increases sediment shoaling, so it needs complete dredging every year.

High water this spring also inundated the harbors. “Every harbor was affected by the high water, but because we’ve dredged every year, it was easier to remove the sediment,” Watson said. None of the harbors sustained any flood damage from high waters, which Watson attributes in part to good maintenance.

The navigation channel depth is maintained to provide a minimum 9-foot channel depth, during a gage reading referred to as low water reference plane (LWRP), Watson said. “Memphis Harbor/McKellar Lake LWRP is -7.2 on the Memphis gage, while Elvis Stahr Harbor LWRP is 3.5 on the Hickman gage,” she said.

Depending on the harbor, the dredged material goes to either open-water or upland placement. Generally, Dyer said the sandy materials go to upland facilities and the finer materials go to open water. Inland Dredging Company uses a spill barge to place that material in deep holes in the Mississippi River.