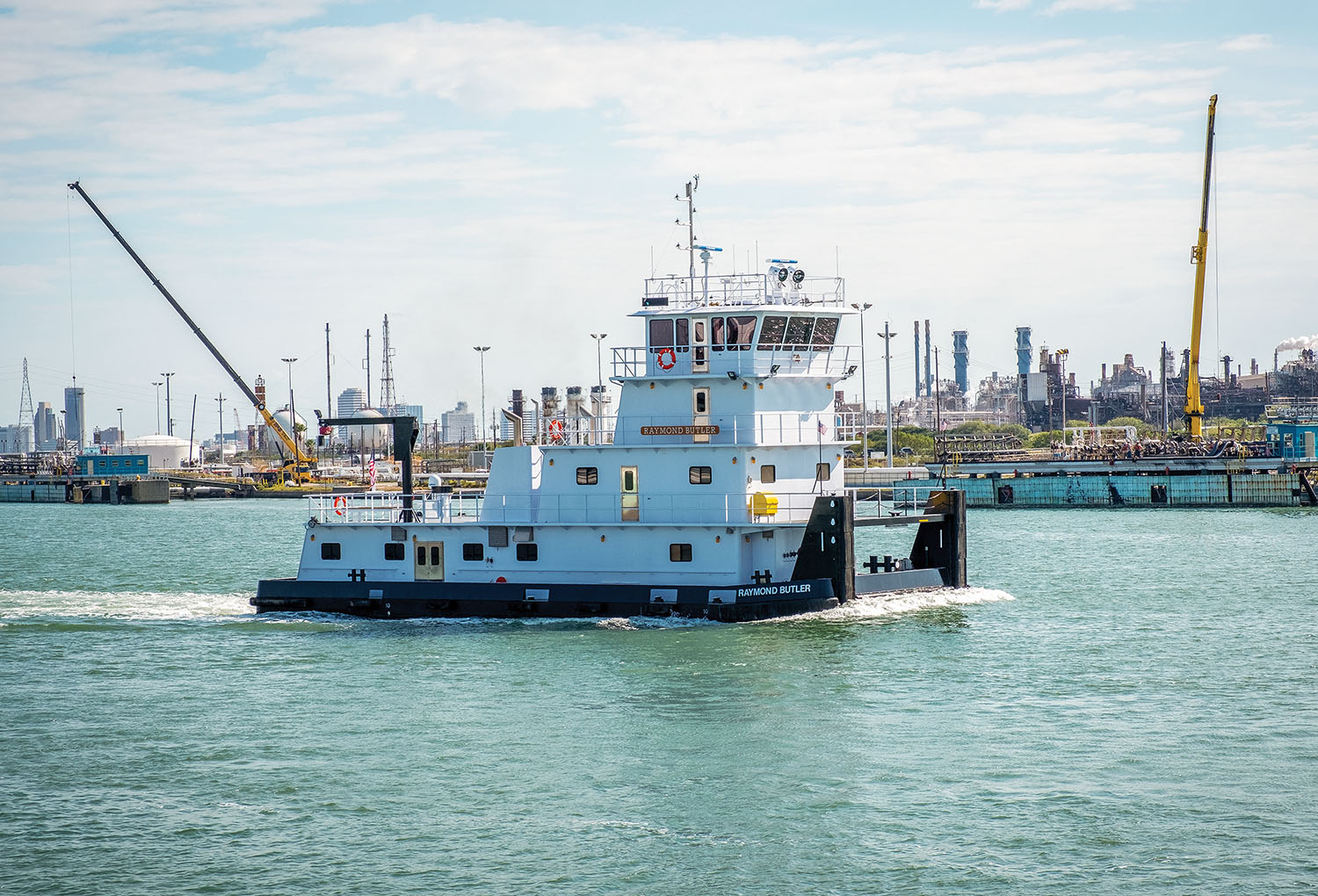 For Raymond Butler, a simple answer to a question late last year led to the honor of a lifetime.

Butler, new construction vessel representative for Maritime Partners LLC, the Metairie, La.-based owner of more than 350 towboats and barges, combined, on long-term charter, was meeting with company co-founders Austin Sperry and Bick Brooks. The trio was discussing Maritime Partners’ upcoming new towboats, and Sperry, who serves as chief operating officer of the company, asked if a vessel had ever been named for Butler.

“When Bick and I asked him if he’d ever had a boat named after him, he immediately shook his head no,” Sperry recalled.

Sperry said he and Brooks, CEO of Maritime Partners, knew exactly what to do next. At the time, the next new vessel for Maritime Partners was due out from John Bludworth Shipyard in Corpus Christi, Texas.

“I immediately called Gasper [D’Anna, president of the shipyard] two seconds later and said, ‘Send in a change order. Cut the name we have on there off. It’s now the Raymond Butler,’” Sperry said.

Recalling that conversation, Butler, a longtime, well-respected leader in the maritime industry, admitted that having a namesake vessel operating on the nation’s inland waterways was always a dream of his.

“Although I had secretly wished for this honor to happen before I ‘sailed off into the GIWW sunset,’ my answer was no,” said Butler, referencing the Gulf Intracoastal Waterway. “Austin smiled and nothing more was said.”

The surprise came for Butler on December 6, 2019, when he made a regular visit to John Bludworth Shipyard.

“It was during one of my subsequent boat inspections on December 6 that I accidentally walked up to John Bludworth Shipyard Hull #165, and there on the forward bulwarks was my name,” Butler said. “I had to do a double-take to be sure I was seeing this for real. The whole thing caught me totally by surprise. It still seems surreal to me. It is an indescribable feeling, a lifetime honor.”

“He quit in 1987 to follow his dreams and pursue his passion for operating his own barge line,” Sperry said. “He resurrected his father’s company, South Texas Towing, where he primarily operated for Kirby and Stolt-Nielsen Tankers.”

In 1991, Butler sold the assets of South Texas Towing to Kirby Corporation, where he took on an executive role as assistant vice president of operations. Later in his career, he also served in an executive role with Hollywood Marine. In 2001, Butler became executive director of the Gulf Intracoastal Canal Association (GICA). He led the association until 2010, when he took a leadership position with the BP Oil Spill Response Command in Mobile, Ala. Since then, Butler has served as a consultant on a wide range of projects and, prior to joining Maritime Partners, spent two years with a small inland tank barge line.

Looking back, Butler reflected on the lifelong passion he’s had for towing vessels and the industry they support.

“I have loved this business of towboats since I was about this tall,” said Butler, speaking at the December 19 christening. “It all started, actually, right here on this piece of property.”

Butler said the first towboat built for his father’s company, the mv. Kelley O, was designed “on our living room table at our house in Point Comfort” and built at Coastal Iron Works in March 1968 on the same real estate where John Bludworth Shipyard now is located. The Kelley O actually had sea trials in the same place where the mv. Raymond Butler had sea trials 51 years later. Butler decked on the Kelley O in June of 1971 under Capt. Robert C. Dobbs. He presented a photo and plaque commemorating his father, South Texas Towing and the Kelley O to the crew of the mv. Raymond Butler.

“In the course of doing that, I just fell in love with towboats, and it never left me,” Butler said. “This business has been my passion, and I have Nita [his wife] to thank for encouraging me to leave Union Carbide and start South Texas Towing again.”

Besides thanking his wife, Butler also showered thanks on all the peers and colleagues through the years that have had such a huge impact on him, professionally and personally.

“You are friends that have helped me when we needed,” he said. “You’ve guided us. You’ve provided us with opportunities when there were none. It’s just an example of us helping each other to achieve what we’re capable of doing.”

Butler also thanked both the shipyard crews and shipyard leadership for building such a capable towing vessel.

“John Bludworth-designed boats are in super demand,” Butler said. “I’ve operated them. They are hard-pushing boats. Crews that are on these boats always want to go back to them, and those captains are singing the praises of John Bludworth Shipyard.”

D’Anna, in turn, said it was a special honor to build the mv. Raymond Butler, which is the third of six vessels the shipyard is building for Maritime Partners. D’Anna recounted a conversation he had with Sperry just as Maritime Partners was gearing up to begin its new build program.

“When Austin and I signed a contract for us to build these boats, he asked if I could recommend someone he could trust to look after his investment in constructing these boats, as well as others he is building,” D’anna said. “I told him there is only one person I would recommend who has the integrity, skills and knowledge to look after his interests, and that would be Raymond Butler.”

D’anna went on to detail the main features of the mv. Raymond Butler, which measures 84 by 32 feet, with an eye level of 34 feet, a molded depth of 11 feet, and a draft of 8 feet, 6 inches. The twin-screw towboat offers 2,600 hp. from a pair of Cummins QSK38M1 EPA Tier 3-compliant main engines from Cummins Marine. Ship service power is from two Cummins 99 kw. generators, also from Cummins Marine. Main engines are mated to Reintjes WAF 665 gears, with a 5.95:1 ratio and internal shaft brakes, from Karl Senner LLC. Those engines and gears turn four-blade, stainless steel Sound propellers (82-inch diameter and 62-inch pitch) from Texas Wheel Works Inc.

Inside, the mv. Raymond Butler has a total of four staterooms with room for a crew of six.

To close the christening ceremony, Joy Manthey, an accomplished vessel captain and chaplain with Seamen’s Church Institute, led the crowd gathered in a corporate prayer for the mv. Raymond Butler and its crew. She also expressed thanks for the gift of water.

“May we be good stewards of all the waters we come in contact with,” she said. “Thank you for the way water connects us, refreshes us, sustains us, cleanses us, and allows us to share our goods and cargoes with others. Thank you for our maritime industry which allows us to support ourselves as well as the world’s economy, keeping the planet clean, quiet and ecologically healthy.”

After that, Butler climbed aboard his namesake vessel and shattered a bottle of champagne over its forward H bitt.

For more pictures from the christening ceremony, see the slideshow below (photos by Frank McCormack): 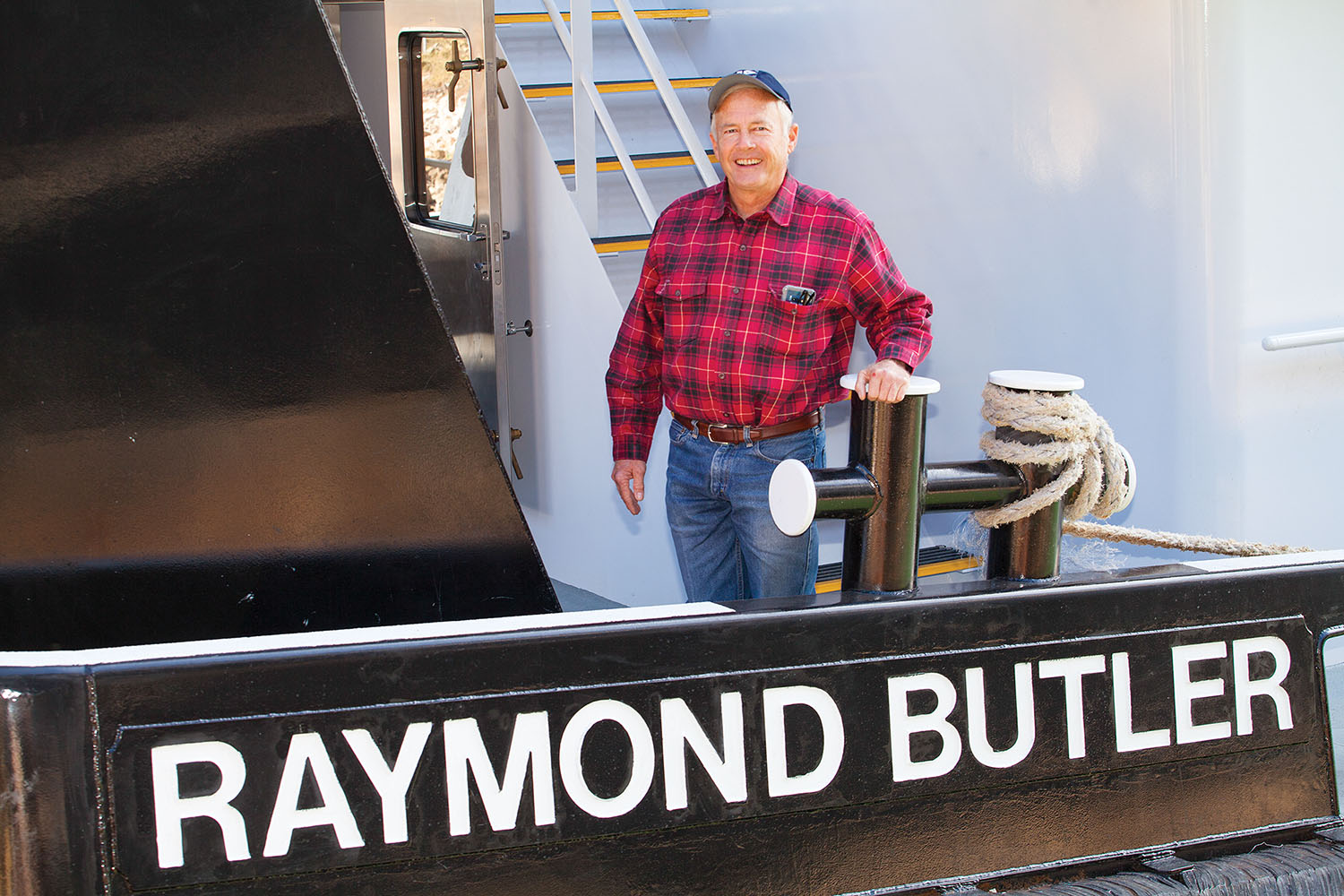 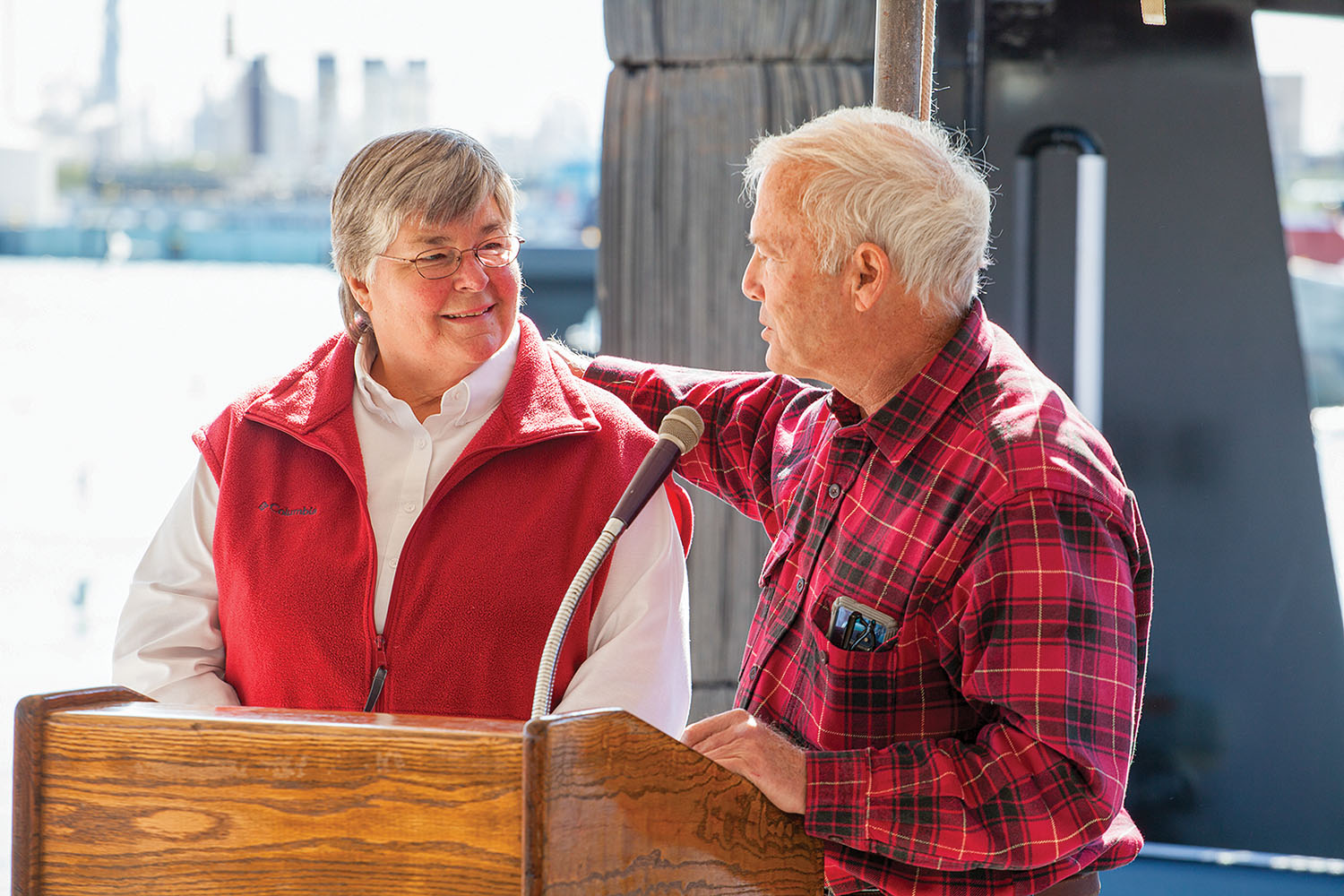 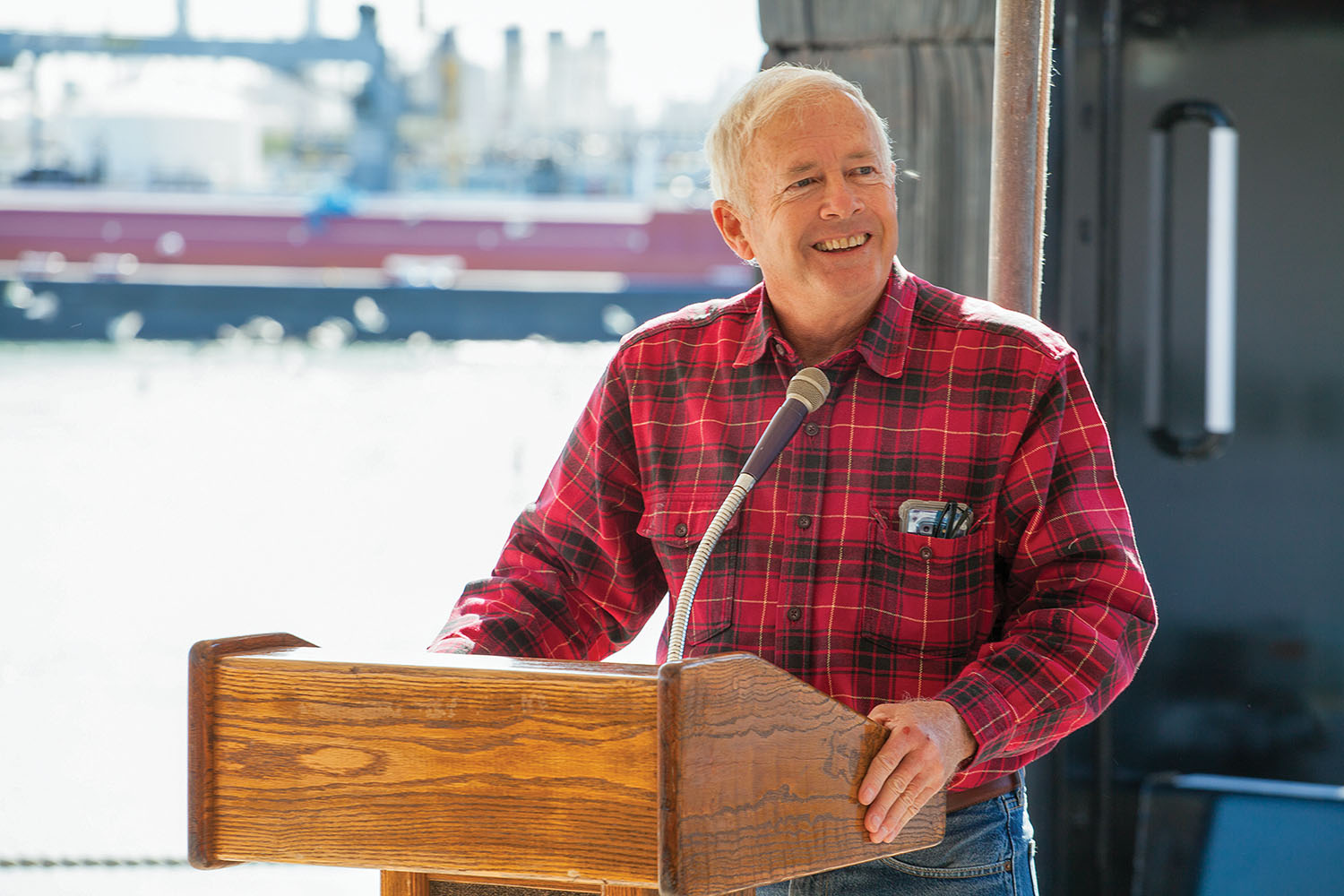 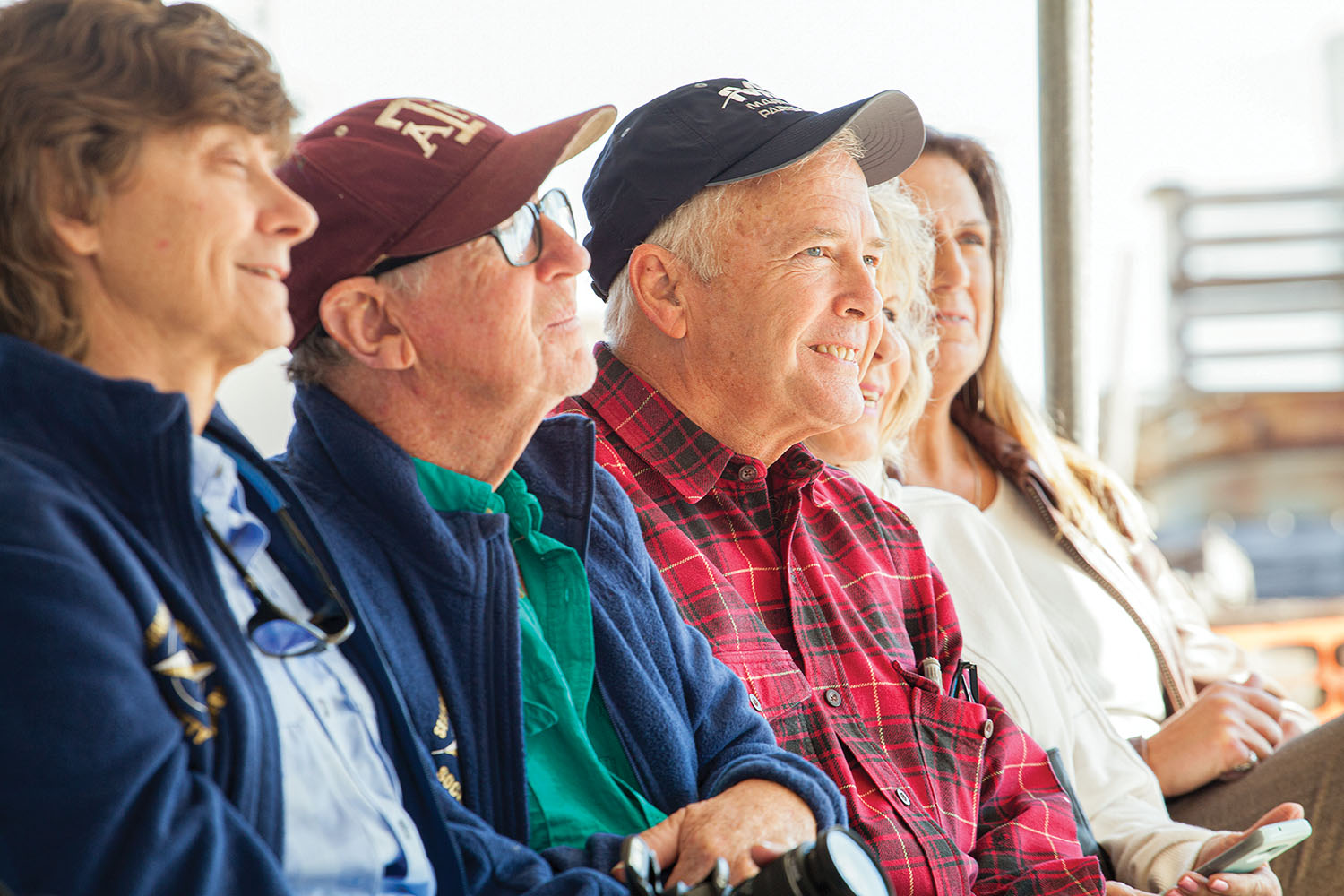 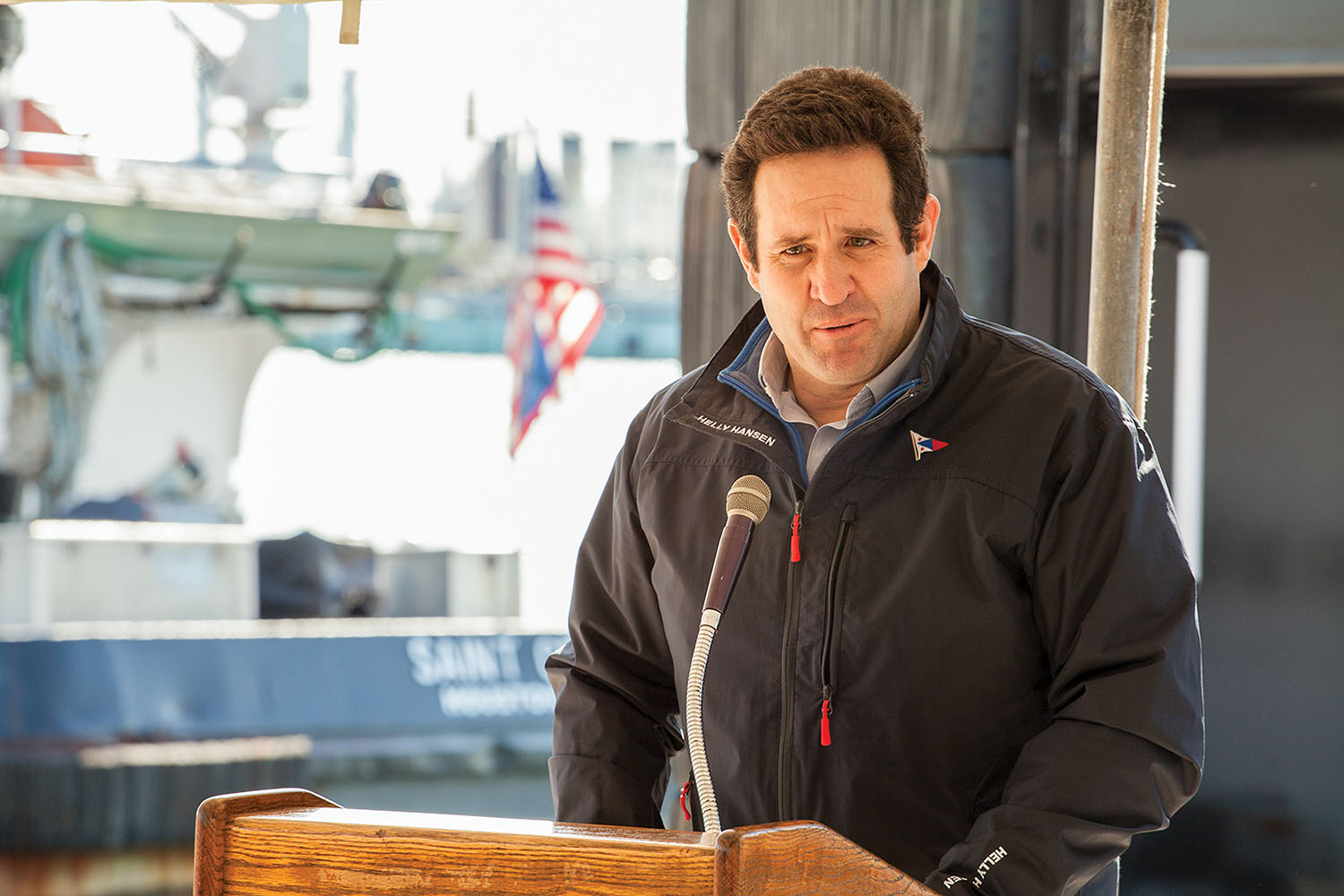 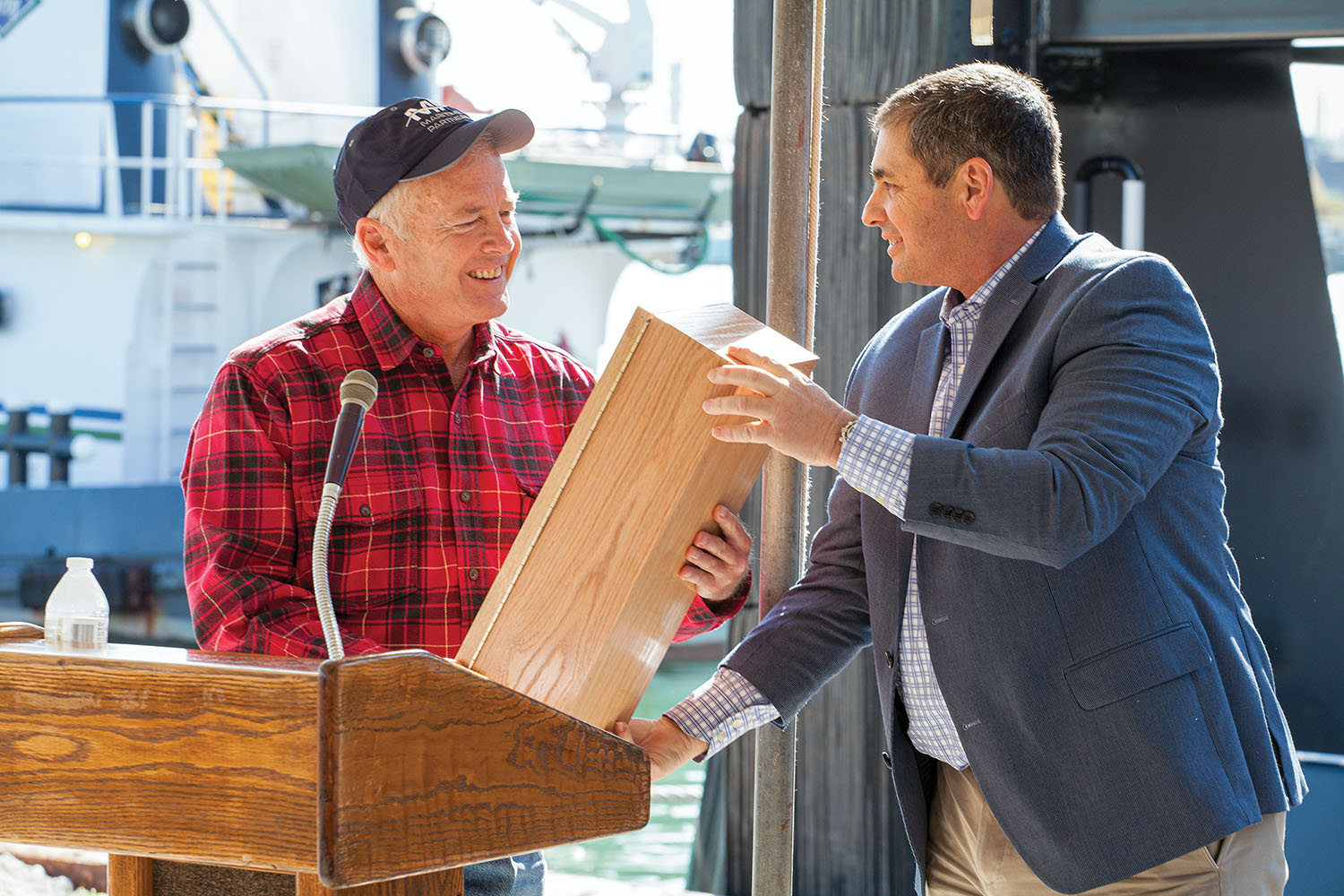 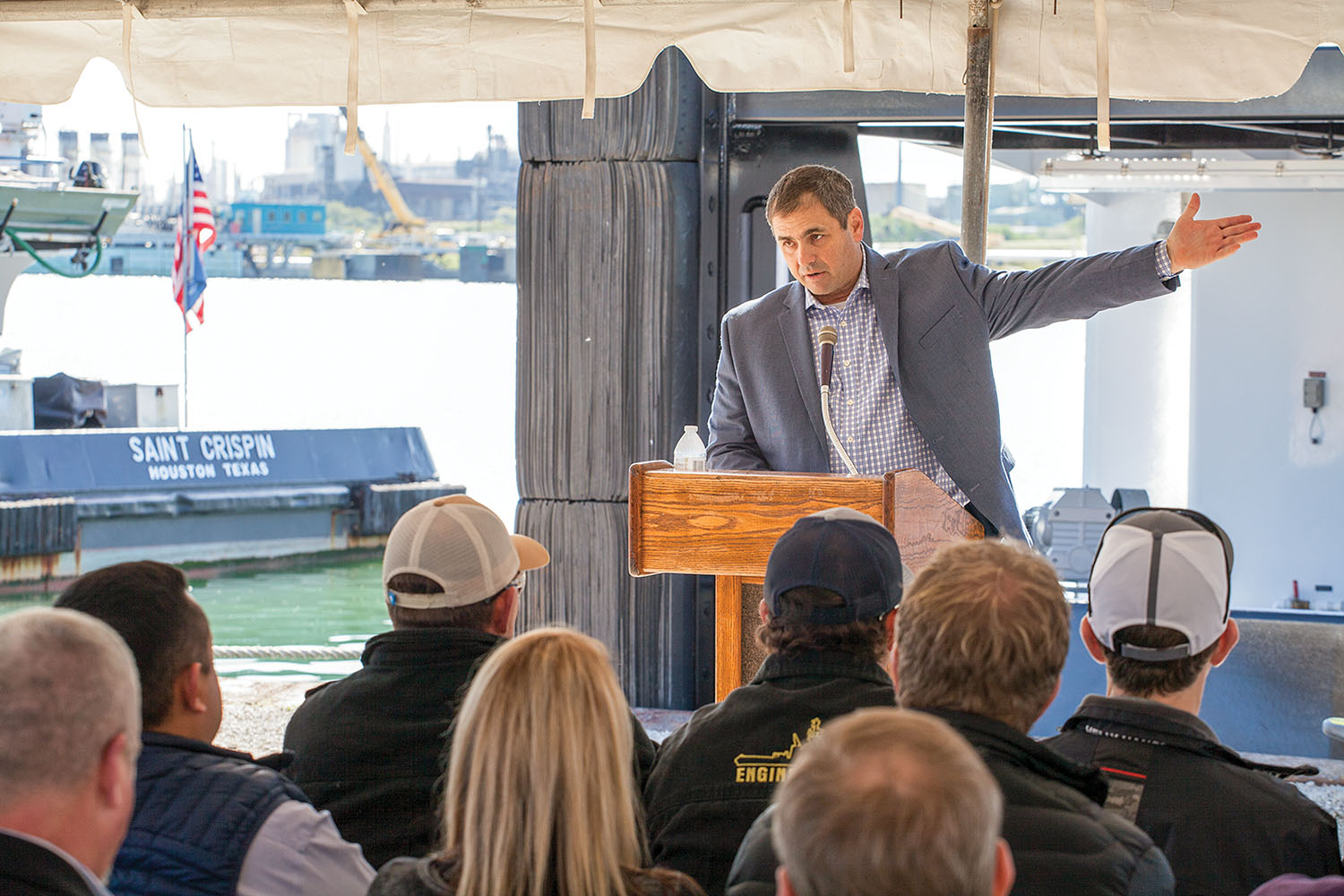 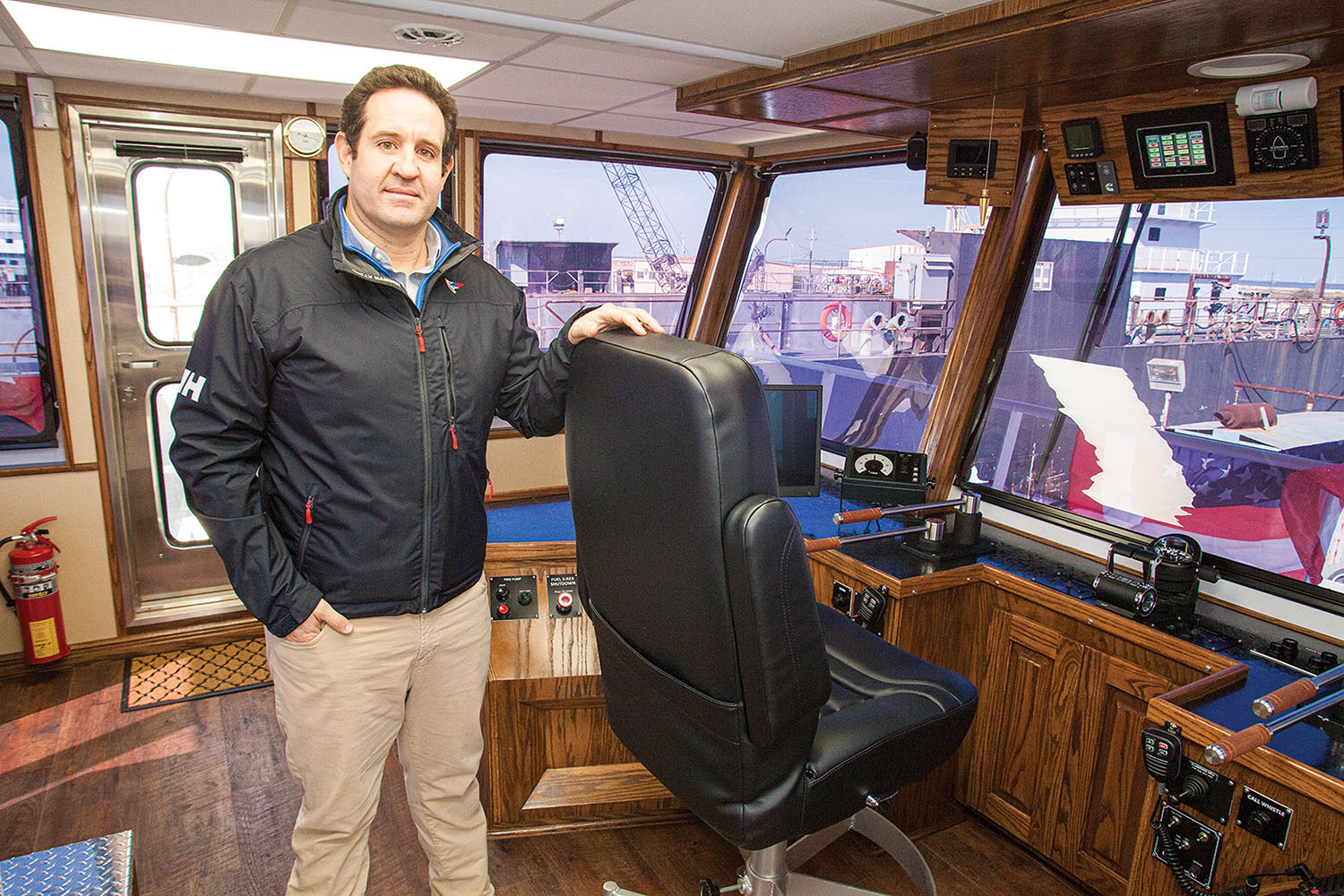 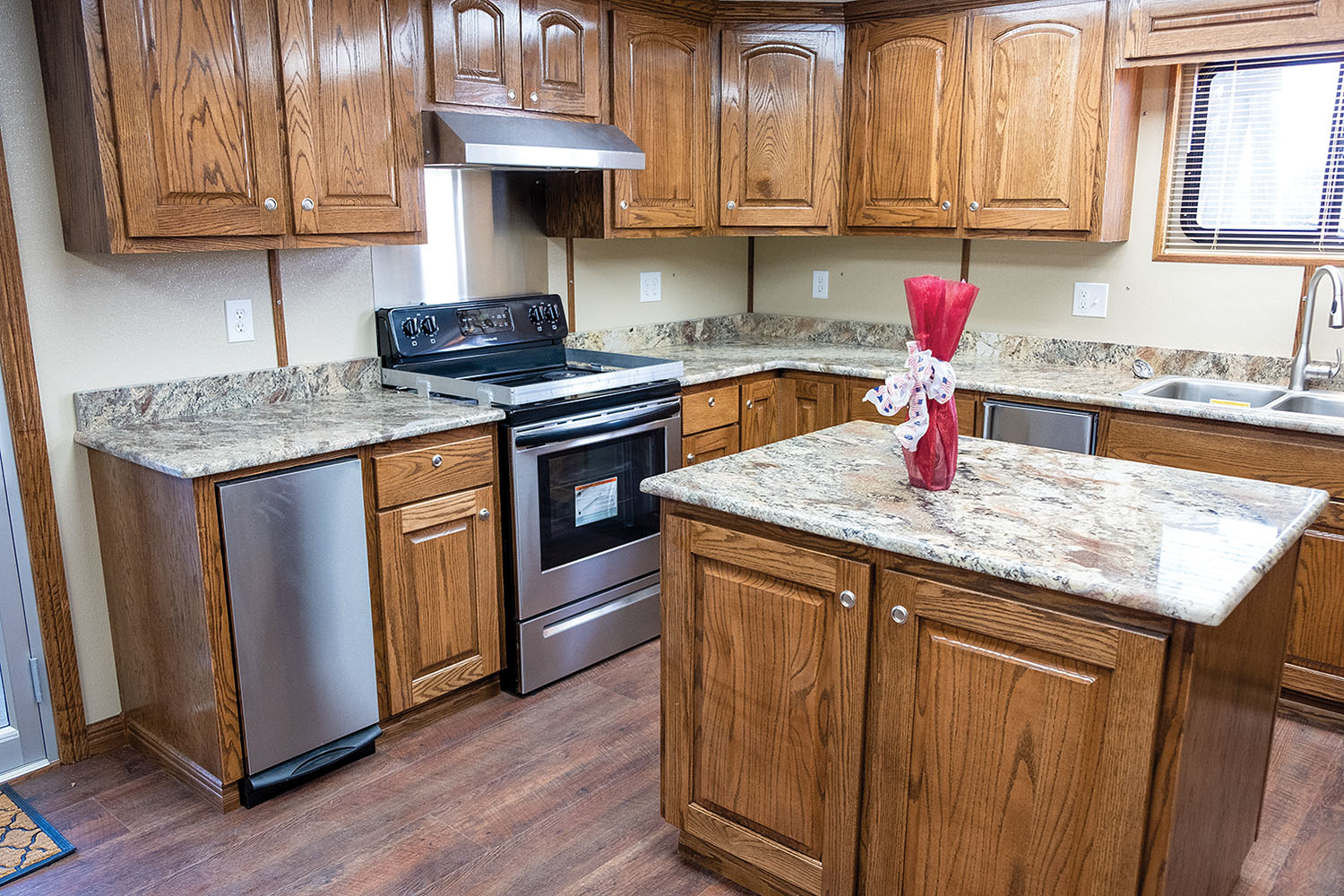 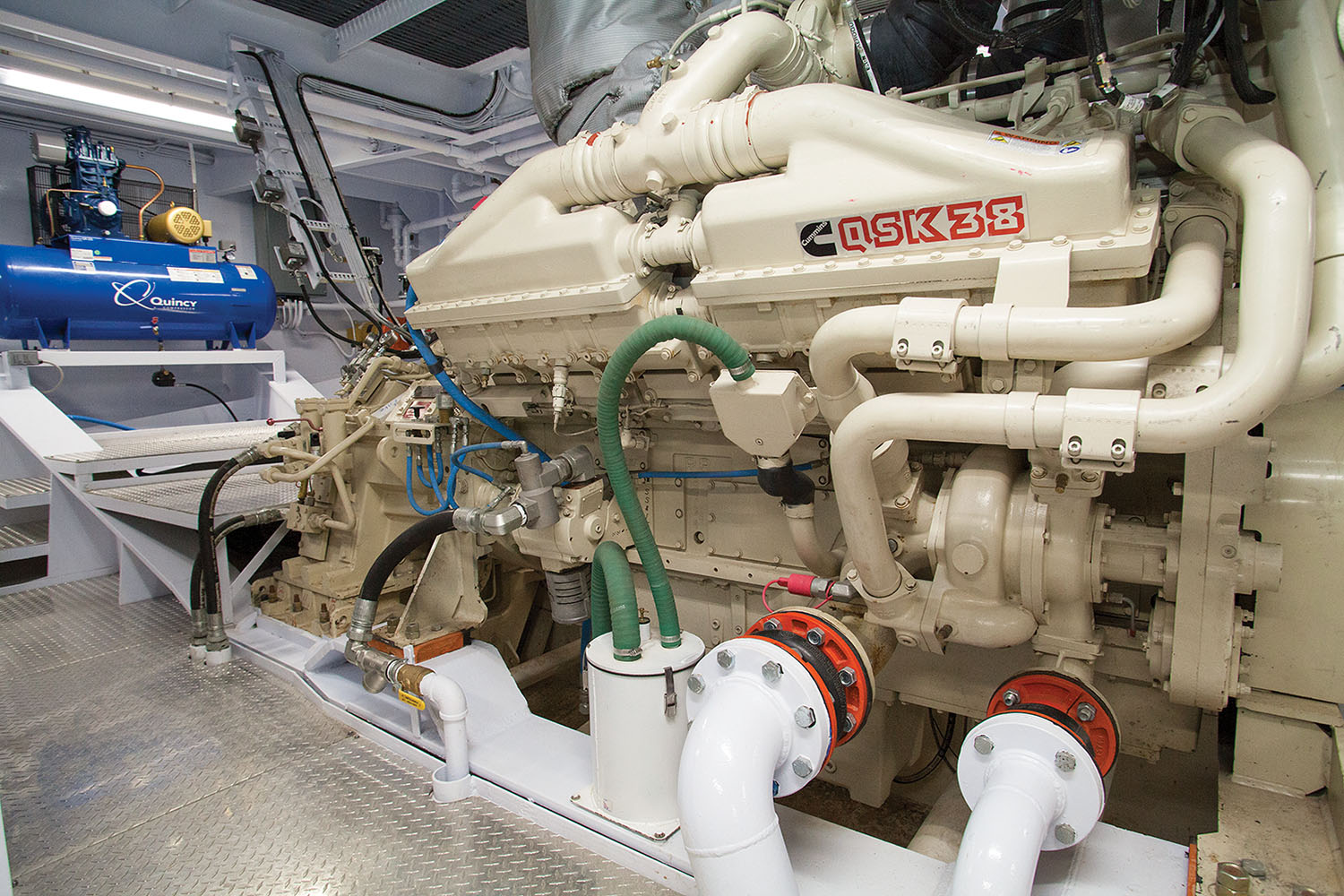