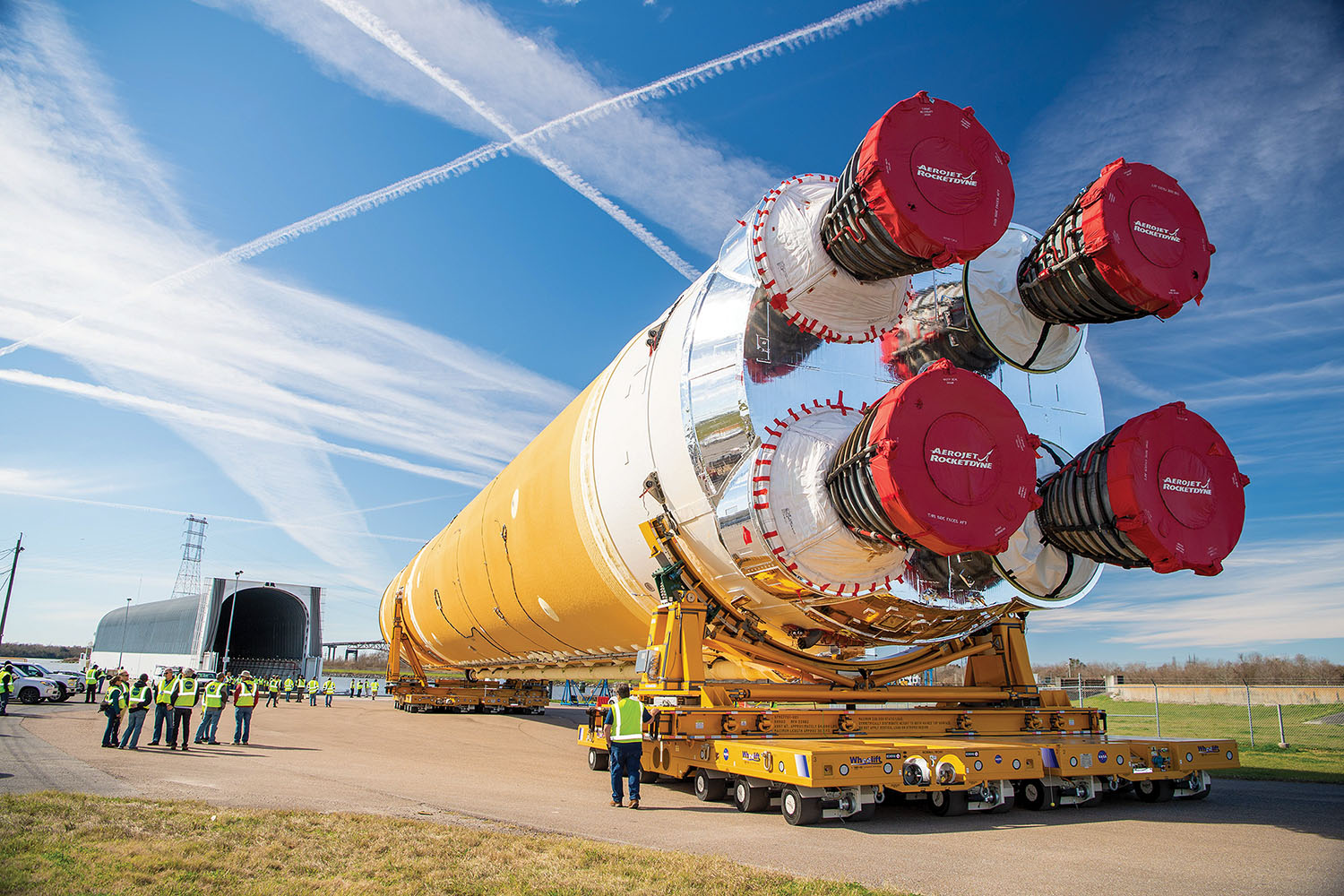 Now aboard the Pegasus barge, and with a push from a contracted towboat, the SLS rocket core stage will travel via the Gulf Intracoastal Waterway (GIWW) to Mississippi and the Stennis Space Center near Bay St. Louis, where the rocket will undergo its “core stage Green Run test series.”

“Completion of this first-time build of the Space Launch System rocket’s core stages puts humans on the cusp of a new era of space exploration,” said John Honeycutt, the SLS program manager at NASA’s Marshall Space Flight Center in Huntsville, Ala. “NASA’s SLS rocket is designed to evolve so a variety of missions can be accomplished first to the moon for the Artemis missions and then to Mars and other deep space destinations.”

The SLS rocket core stage is the largest stage ever built at Michoud, the facility that previously produced the Saturn V rocket stages for the Apollo missions and the external fuel tanks for the space shuttle program.

Besides its miles of cabling, along with its avionics and propulsion systems, the SLS rocket core stage carries a combined 733,000 gallons of propellant in two propellant tanks, which power four RS-25 engines. The rocket’s liquid hydrogen tank has a capacity of 537,000 gallons, while its liquid oxygen tank can hold 196,000 gallons of fuel. The core stage, measuring 212 feet long by 27.6 feet wide, delivers more than 2 million pounds of thrust, which will eventually deliver NASA’s Orion spacecraft and the crew of Artemis III to the lunar South Pole by 2024. Artemis I, which will be powered by the recently-completed rocket core stage, will be an uncrewed test flight this year. NASA estimates Artemis II, the first crewed test flight of the Orion spacecraft, will launch in 2022.

“This is a historic moment for NASA’s Artemis program and a proud time for the Space Launch System Core Stage team as the first flight article leaves the factory floor,” said Julie Bassler, NASA’s SLS Stages manager. “Rollout of the core stage to Stennis ahead of the core stage Green Run test series signals an exciting next phase as NASA prepares for the first Artemis launch. The Green Run test series will verify the stage is ready to ship to the launch site.”

According to NASA, more than 1,100 companies in the United States have contributed to the production of the SLS rocket. Boeing led the core stage construction effort at Michoud, while Aerojet Rocketdyne upgraded and supplied the four RS-25 engines.

Simultaneous to development and production of the SLS rocket, NASA and partner companies are undertaking final testing of the Orion spacecraft at NASA’s Plum Brook Station in Ohio. NASA’s Exploration Ground Systems team at the Kennedy Space Center have verified the Artemis launch pad’s infrastructure, and flight controllers at NASA’s Johnson Space Center in Houston have conducted simulation training for Orion moon missions.

“Rolling out the completed core stage from NASA’s Michoud Assembly Facility to go on to NASA’s Stennis Space Center for further testing is an exciting leap forward in the Artemis program as NASA teams make progress toward the launch pad,” said Jim Morhard, deputy administrator of NASA.

In carrying the first SLS rocket core stage, Pegasus is continuing a decades-long tradition of NASA moving rockets and hardware by barge on the nation’s inland waterways. NASA’s Poseidon and Orion barges carried Saturn rocket stages and hardware used in the Apollo program. Pegasus was specially designed and built in 1999 to transport external tanks for the space shuttle program. Pegasus completed the final space shuttle mission in 2011. Just three years later in 2014, NASA contracted with Conrad Shipyard in Morgan City, La., to modify Pegasus to transport the much-longer SLS rocket core stages. Conrad removed a 115-foot section of the barge and replaced it with a 165-foot section, which lengthened Pegasus from 260 feet to 310 feet.

Pegasus traveled between Marshall Space Flight Center in Alabama and Michoud in New Orleans via the Tennessee and Mississippi rivers. The barge travels the GIWW to reach Stennis, while the trip to Kennedy Space Center on the east coast of Florida includes both inland and open-ocean travel.

Caption for photo: The first Artemis rocket stage is moved from NASA’s Michoud Assembly Facility in New Orleans, La., to the agency’s Pegasus barge January 8, ahead of its journey to NASA’s Stennis Space Center near Bay St. Louis, Miss. Once at Stennis, the core stage will undergo Green Run tests, named for the testing of new or “green” hardware. This is the final test campaign for the rocket ahead of the first Artemis launch, set for this summer. (Photo courtesy of NASA)