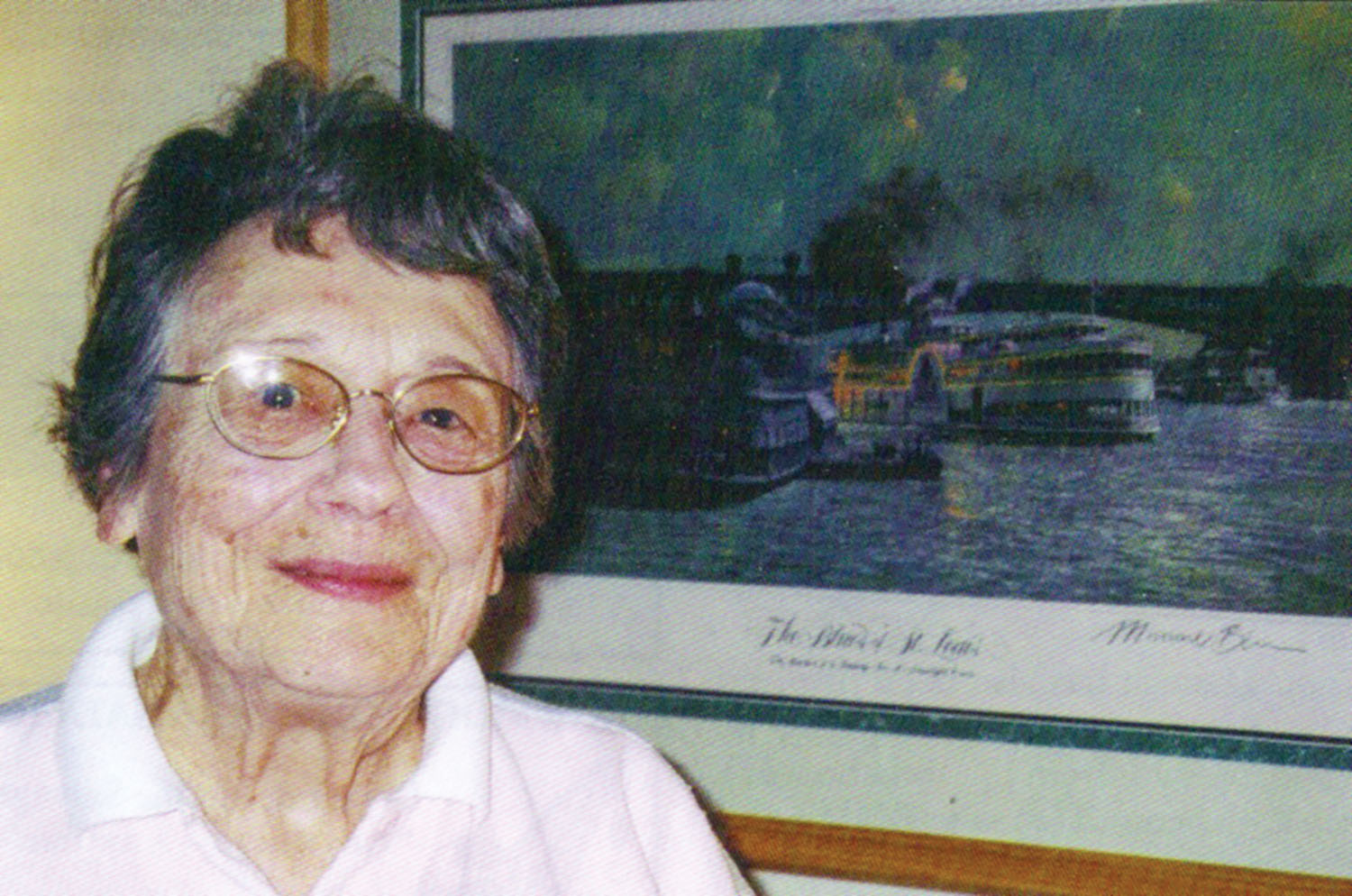 On January 21, the river fraternity lost one of its most dedicated and notable members with the passing, at age 106, of Mary Ackerman Otte, of Quincy, Ill. She was undoubtedly the last person to serve as an officer on vintage vessels of Streckfus Steamers; it was always a privilege and pleasure to visit with Mary, both in person and by telephone.

Mary’s connection to the river began in 1931, shortly after high school graduation in her hometown of Belleville, Ill. She was invited to a luncheon at the St. Louis home of Lola Streckfus, wife of Capt. Joe Streckfus of the famous excursion steamboat company. The ladies spent the afternoon making paper flower decorations for the garden deck of the steamer Capitol. In the course of conversation, Mary casually mentioned that it would be interesting to work aboard a steamboat. One week later found her as the assistant purser and secretary aboard the J.S. De Luxe, then operating at St. Louis with Capt. Verne Streckfus as master.

For a salary of $14 per week, her duties included selling tickets, figuring the payroll, and relieving the cafeteria cashier. The day began at 7 a.m. and ended at midnight when the boat tied up following the moonlight excursion. It was also her responsibility to carry the money bags “up the hill” to the bank, sometimes assisted by a deckhand if the hour was late.

When the big sidewheeler laid up at the end of the summer season, she transferred to the Capitol, which had returned from St. Paul. Soon she was on her way to New Orleans as secretary to Capt. Roy Streckfus.

Her tiny office was tucked beneath the main stairway, but she had a view of the passing shoreline as she prepared financial reports, handled receipts and made entries in the boat’s logbook. In a 1999 letter to this writer, Mary recalled that she loved the experiences of a tramping excursion boat and visiting river cities such as Memphis, Vicksburg and Natchez, where there were always interesting sights and experiences. When the Capitol landed at Hickman, Ky., she remembered wondering about a strange looking contraption she saw just over the levee. It was a cotton gin, the first she had ever seen and which was explained to her in detail by a citizen of the southern town.

Mary enjoyed the family atmosphere among the crew on the steamboats and noted that she was close to the cooks, who often prepared some of her favorite dishes and always sent a big tray to the boat’s office if she didn’t appear for breakfast. Because the majority of the deckhands were illiterate and it was a requirement that they sign for their pay, she kindly taught many of them to write their names, often having practice sessions. She also wrote letters for them to their families at home and read the responses to them.

Other memories include weekly lunches with Capt. Streckfus in a New Orleans hotel dining room where the occupant at the next table was often Huey Long, and of hearing the lively music of Louis Armstrong, Bix Biederbeck and Fate Marable, who played the calliope and directed bands on the boats.

A river romance developed between Mary Ackerman and Bill Otte, who had started on the Capitol as clerk, later advancing to steward, mate, steersman and pilot. After a five-year courtship, they were married in 1936 and made a home at Quincy on the Upper Mississippi. Capt. Otte worked as pilot on the Streckfus sidewheeler President before serving as mate on convoy vessels in the North Atlantic during World War II. Returning to the river, he completed his license for the entire Mississippi and Illinois rivers, working for Federal Barge Line and other companies, eventually operating a small towboat for a local company before retiring in 1951. Capt. Otte passed away in 1986. Mary became secretary to the principal of Quincy High School, a position she held for many years.

With her interest and love for the river never wavering, Mary greatly enjoyed her membership in the Midwest Riverboat Buffs, attending meetings whenever possible and swapping steamboat stories. Typical of people on the river who were always “happy to give,” graciously sharing her memories and memorabilia, we salute with gratitude and admiration, the memory of Mary Ackerman Otte; truly a grand lady of steamboating.

Caption for photo: Mary Otte posing with Michael Blaser’s artwork, “The Blues of St. Louis,” featuring the Streckfus steamers Capitol and J.S. De Luxe, upon both of which Otte served as a crew member. (Photo by Judy Patsch)