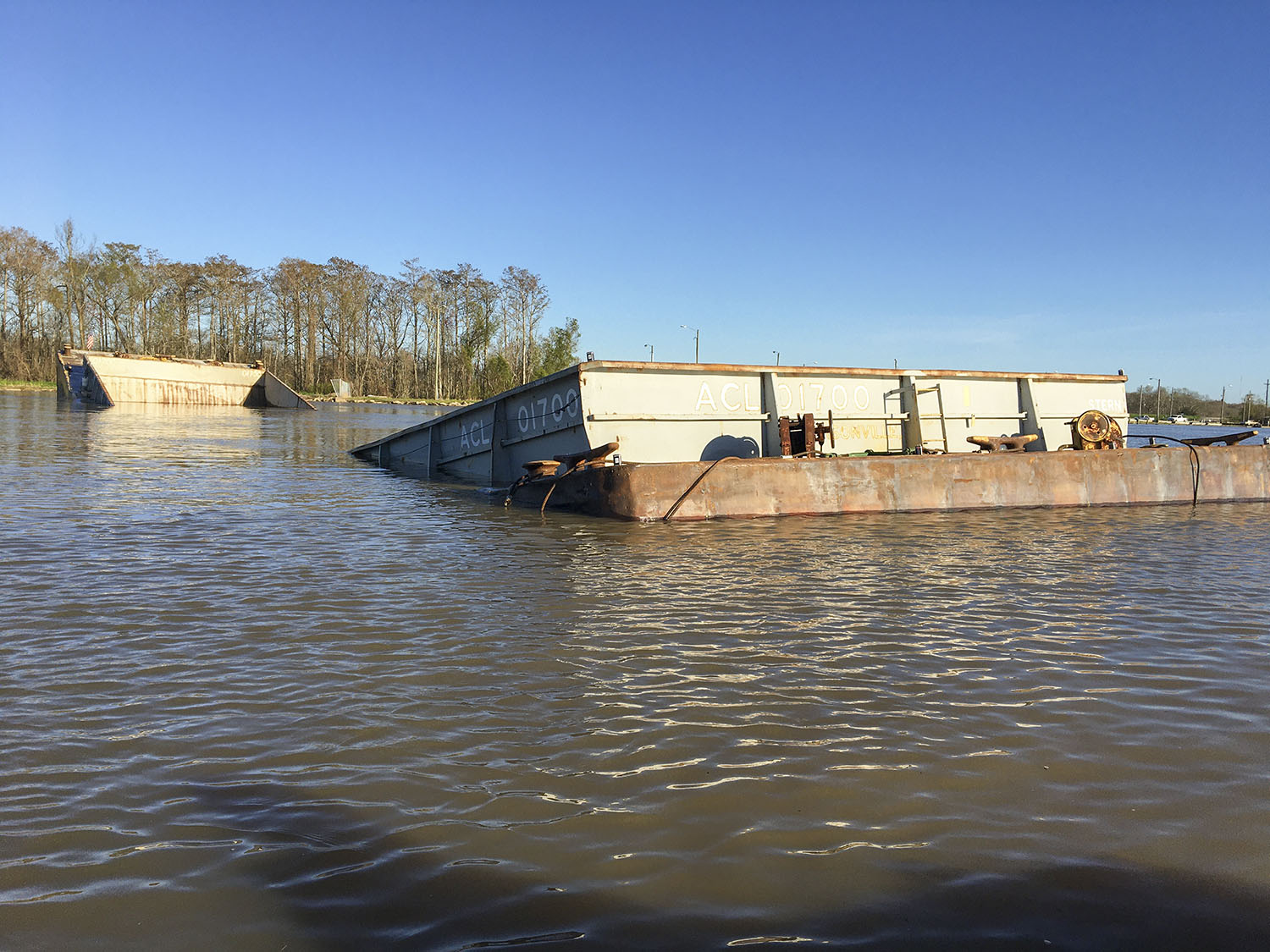 Barge Splits In Half, Sinks In GIWW

The Gulf Intracoastal Waterway reopened to navigation February 7, less than five days after a vessel ran aground near Berwick, La., leaving a loaded hopper barge damaged and blocking the waterway.

Vessel Traffic Service Berwick Bay received a report around 10 p.m. February 2 that the mv. Miss Odessa, which was pushing six hopper barges loaded with aggregate, had run aground while transiting the Gulf Intracoastal Waterway near Mile 99.

The U.S. Coast Guard reported that the Miss Odessa was traveling southbound on the Atchafalaya River that night. The vessel turned west onto the Gulf Intracoastal Waterway and subsequently ran aground. When the Miss Odessa attempted to break free, one of its barges, named ACL 01700, split in half and sank, the Coast Guard said.

By the following morning, an inspection team from Marine Safety Unit (MSU) Morgan City arrived on scene. The MSU Morgan City team reported no damage to the Miss Odessa or the remaining barges.

Following the incident, the waterway near Mile 99 was closed to navigation. As of the afternoon of February 3, the Coast Guard reported a vessel queue of 12 southbound tows, six westbound tows, 28 eastbound tows and four northbound tows.

By February 6, salvage operations were well underway to remove 1,600 tons of aggregate from the waterway. The salvage contractor was working to remove all the gravel from the sunken barge and planned to begin removing the barge from the waterway the following day. As of February 6, the queue had swelled to more than 190 towing vessels and 560 barges.

“The location of the wreck is in a particularly critical point along the Gulf Intracoastal Waterway, as it is adjacent to the intersection with the Atchafalaya River, a meeting point for two major shipping channels, along which most of the Gulf’s maritime commerce transits,” Lt. Cmdr. Zach Robertson, prevention department head at Coast Guard Marine Safety Unit Morgan City, said in a statement. “This area is unusually challenging to navigate this time of year due to seasonal high water levels and rapidly changing currents.”

The last stages of the salvage effort went faster than originally anticipated, and the Coast Guard was able to reopen the waterway to navigation on February 7. The Coast Guard reported a sizable queue in that area of 224 towboats and 628 barges as of 1:15 p.m. that day. Vessel Traffic Service Berwick Bay and towboat operators were working hard to clear the queue as soon as possible.

“We have been grateful for the patience, understanding, and cooperative spirit of our industry partners as we all work to resolve this unfortunate event as quickly as possible,” said Cmdr. Heather Mattern, commanding officer of Marine Safety Unit Morgan City. “Industry has been coming to us throughout the week offering ways we can work together and assist our teams in clearing up what has become a heavily backlogged waterway. Our priority now is to restore normal vessel traffic flow to the critical waterway safely and efficiently.”

The Coast Guard estimated it would take up to a week to restore traffic on that part of the waterway to normal.

Caption for photo: A barge in tow of the mv. Miss Odessa split in half and sank after the tow ran aground in the Gulf Intracoastal Waterway (Photo courtesy of U.S. Coast Guard)