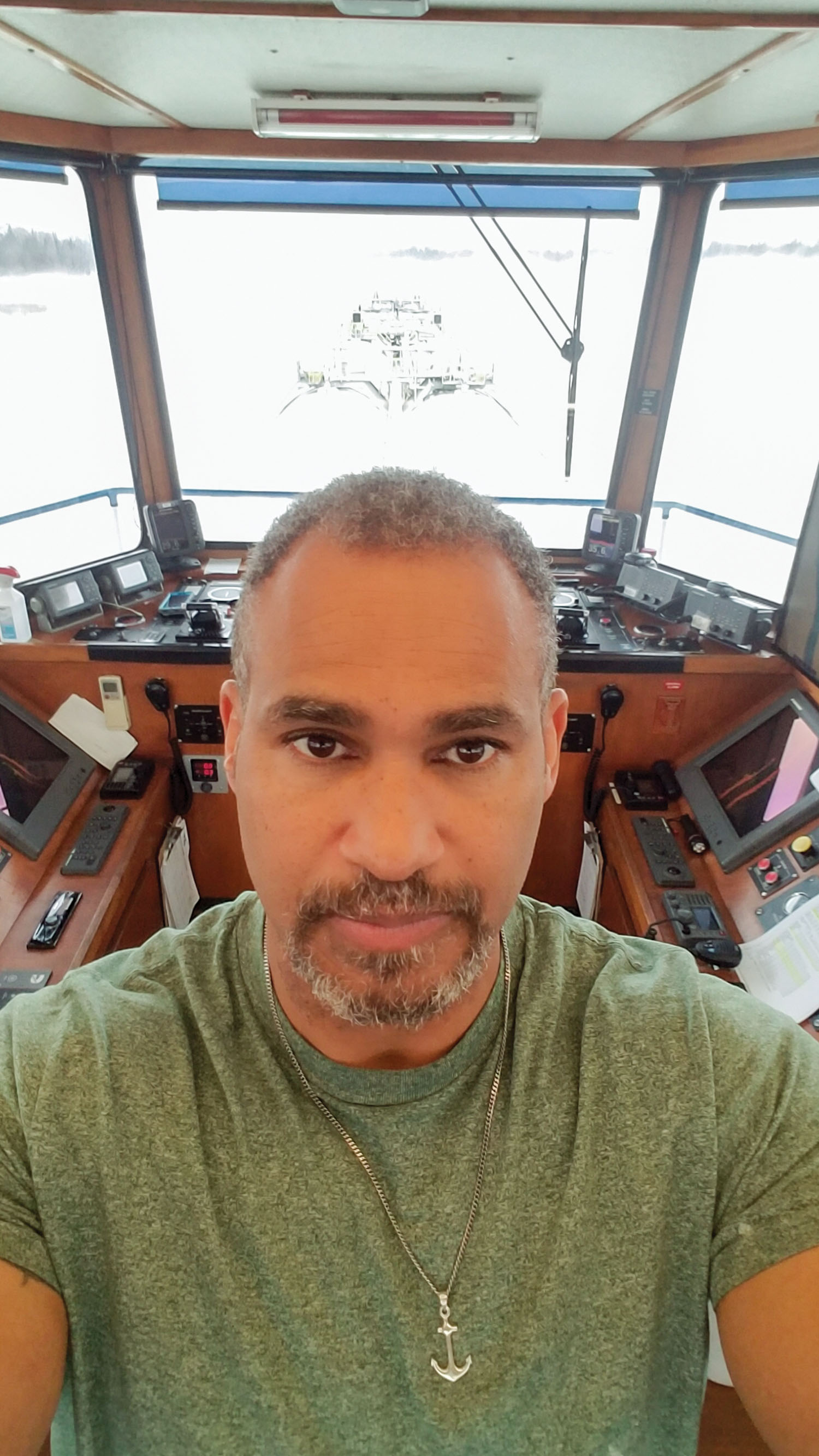 Capt. Vince Bradford, captain of the mv. Frank T. Stegbauer, made his way into a career on the inland waterways almost by accident.

He was raised in Los Angeles, Calif., born from a family that knew nothing of the rivers. After serving three years in the Army, Bradford had been working as a carpenter. But “carpentry was slow” in California in the nineties, so in 1996, through an acquaintance, he began working on the American Queen.

“I started out as a porter, but as soon as I saw the pilot, I knew I wanted to work my way up to that,” Bradford said. He transferred to the deck crew and immediately began learning everything he could. After his deck watch was done, he would ask the pilot if he could observe in the wheelhouse—and eventually help steer. “I always had my sights set on getting my licenses. Not everyone showed an interest, so he was happy to let me steer.”  With the American Queen and, later, the Columbia Queen, he ran on the Columbia River while studying for his pilot’s and master’s licenses.

From his friend Capt. John Dugger of the American Queen, Bradford was referred to Bobby Jones at Southern Towing, which was looking for pilots. By this time, Bradford had his master’s license. He already knew Capt. Pete Ciaramitaro, a good friend from when they both worked together on the American Queen. “He was a pilot when I was a deckhand, and it was a little weird when we both began working together as pilots,” said. Bradford. Today, Ciaramitaro is director of operations for Southern Towing.

The company was a good fit for a pilot with experience with Z-drives, which are used on both the American Queen and Columbia Queen.  “Bobby Jones asked me, “’Can you start Wednesday’?” Bradford remembers. He was started as a pilot on the twin-screw, 3,600 hp. Cheryl Stegbauer for two weeks, then given his current boat, the Frank T. Stegbauer.

Bradford’s schedule is one month on, one month off. In his off times, he trip-pilots up and down the rivers for several other companies, including Marquette, Kirby and Florida Marine. When he’s ashore, he lives just south of Denver, Colo, where he and his wife raise their two sons, who are 13 and 17.

When speaking of his company, Bradford uses a word often used by captains, pilots and deckhands at many towing companies. “Southern Towing feels like a family.”

Bradford is emphatic in his appreciation for Z-drive boats. “Z-drives are the future of the inland industry,” he maintains. “I think you have way more control [than with conventional propellers]; that’s the beauty of the Z-drive. You never lose your stern.”

Bradford admits that boats with rudders might “hold up a little better in the wind.” His scariest moments afloat, he said, came from empty barges and high winds approaching the bridges around Baton Rouge. Once the wind threatened to blow him and his tow sideways into a bridge.

He can also see the appeal of the sticks with which conventional boats are controlled, compared to the controls of Z-drive boats. “But if I had a choice, I’d take a Z-drive every time.”