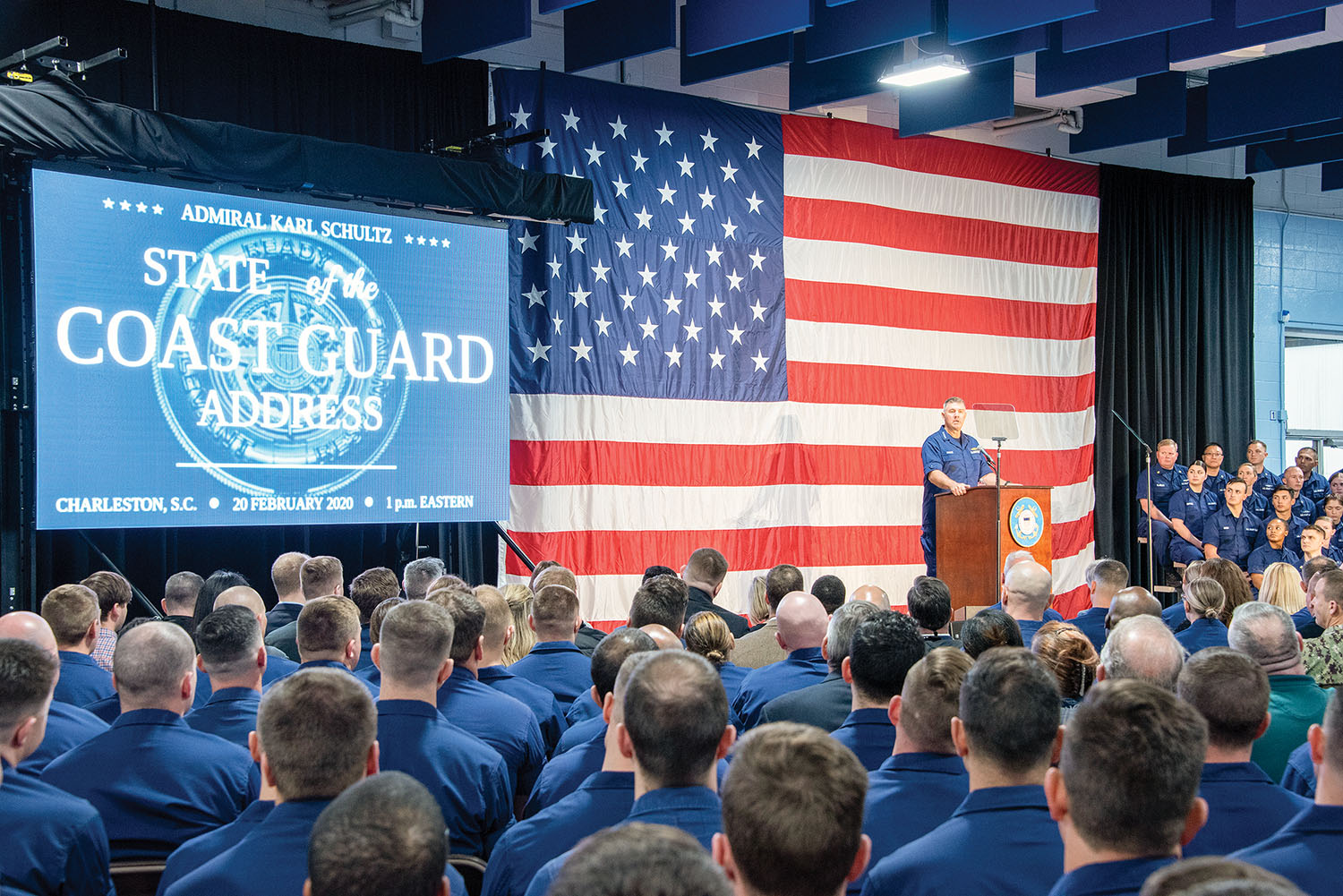 The Commandant of the U.S. Coast Guard outlined his vision for the service and highlighted the accomplishments of its people during his February 20 “State of the Coast Guard” address in Charleston, S.C.

Adm. Karl Schultz reflected on the service’s successes over the past year and the president’s FY2021 budget request. He also outlined plans to expand the Coast Guard’s footprint in the Charleston area, which will homeport five National Security Cutters and could become a future home of the service’s Offshore Patrol Cutter, which is currently under construction.

“Charleston is a first stop to nationwide investment in our service, our facilities, and our people,” Schultz told attendees. “To serve the communities in which we live, we need early adopters like you here today.”

He provided updates on the acquisition timeline for the Polar Security Cutter and Offshore Patrol Cutter. Along with these acquisition updates, the Coast Guard will restore hurricane-damaged facilities in South Carolina and seek to expand its operations based in the “low country.”

The Coast Guard is currently carrying a nearly $2 billion shore infrastructure backlog. In one example, Schultz explained how flooding affected operations at Coast Guard Station Niagara, N.Y, which was pumping more than 200,000 gallons of water from its facility daily last spring.

“Every mission begins and ends at a Coast Guard facility,” said Schultz. “Unfortunately, due to years of flat-line budgets forcing tradeoffs, the facilities that our men and women deploy from and return to are crumbling around them.”

Schultz rolled out the service’s “Tech Revolution” road map, a detailed plan to update the Coast Guard’s 1990s-era hardware, software and analytics. He also described the need to strengthen service innovation initiatives and to accelerate implementation of the best ideas service-wide to field commanders.

These include the marine inspector mobility application INSPECT, partnering with Global Fish Watch to combat illegal fishing, linking to the DoD’s Defense Innovation Unit in Silicon Valley, and the establishment of the Blue Technology Center of Expertise at the University of California San Diego.

Caption for photo: Coast Guard Commandant Adm. Karl Schultz delivers the 2020 State of the Coast Guard Address in Charleston, S.C., February 20. During the annual address, Schultz reflected on the organization’s successes over the past year, detailed the Fiscal Year 2021 President’s Budget Request and outlined the shared vision for the future of the Coast Guard. (U.S. Coast Guard photo by Petty Officer 2nd Class Ryan Dickinson)