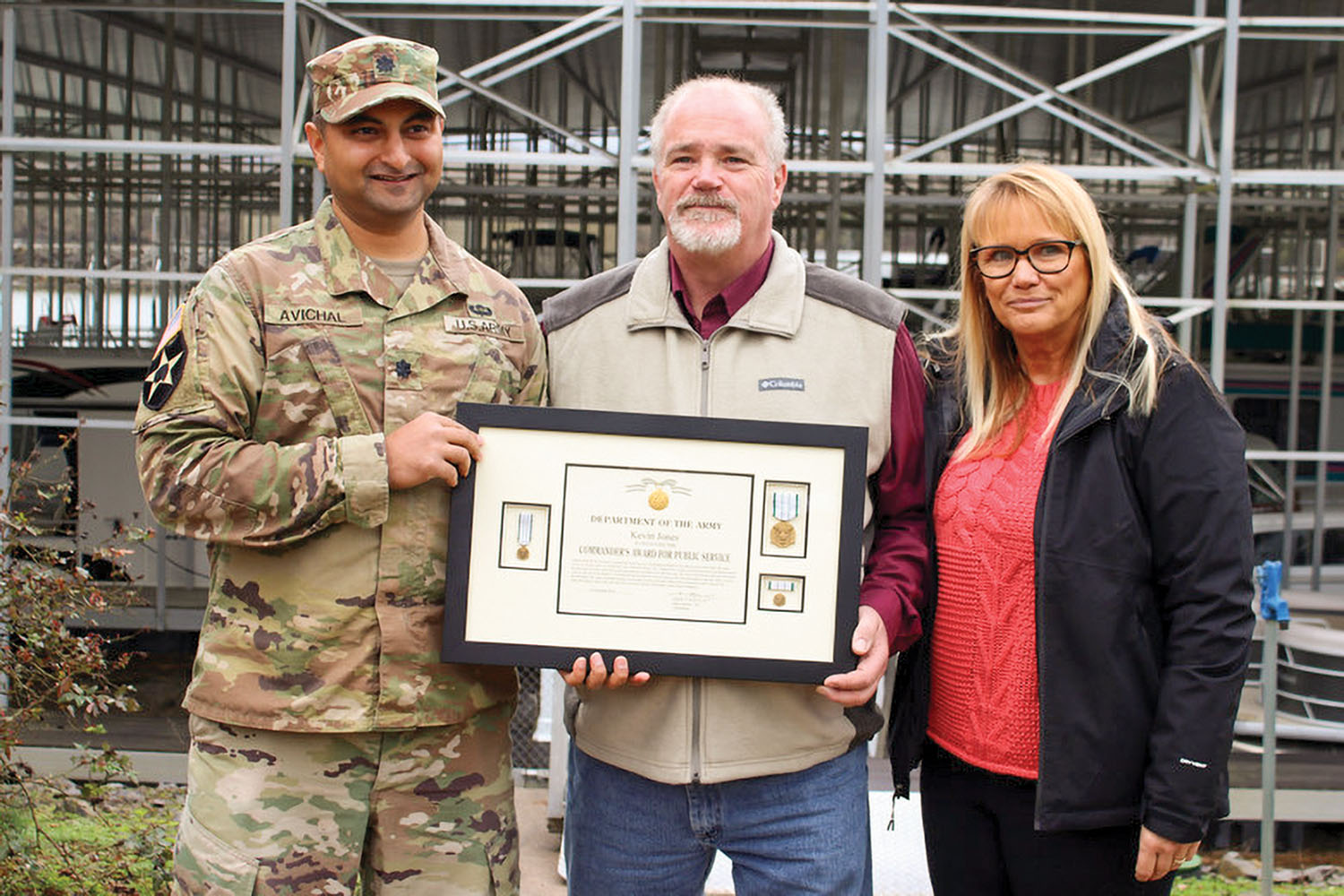 The U.S. Army Corps of Engineers has honored the owner of a Tennessee marina with an award for saving a man’s life last fall.

Lt. Col. Sonny B. Avichal, commander of the Nashville Engineer District, presented the Department of the Army Commander’s Award for Public Service to Kevin Jones, one of the owners of Wildwood Resort and Marina, on January 24. The marina, in Granville, Tenn., is located on Cordell Hull Lake, an impoundment of the Cumberland River.

Jones rescued a man August 5 when his truck, trailer and vessel descended uncontrollably down the marina’s boat ramp. The man called out for help and said he could not swim.

Karen Tillman, the marina’s guest services representative, was at the marina that day and recalled hearing a noise but not being sure what happened at first. Then she saw Jones running toward the water.

“He went running, taking his boots off on his way and just jumped right in,” she said. “He did not stop for a second. We’re just really proud of him.”

Jones told the Corps that he knows it is a prestigious, honorable award, but he just did what anyone would do, given the situation.

“When I went to bed that night, it wasn’t a prideful thought that I saved somebody,” Jones said. “I was just thanking God that at the age of 58 I still had the ability to sprint 75 yards and had the knowledge to get in the water and pull him up.”

He added, “I don’t think I would have been able to live with myself if he would have died because I was out of shape. I thank God I had the stamina and ability to do it.”

Archival told Jones, “You might have been just doing your job to do a great act, but the U.S. Army Corps of Engineers really does appreciate it.”

“I think this is one of the highest awards a civilian can receive and it’s a huge honor,” Summers explained.

The park rangers at Cordell Hull Lake urge visitors to wear life jackets when on or near the water. Summers said Jones and his wife, Donna, along with the entire marina staff, have used the incident to focus even more on making water safety a priority. They have installed lifesaving throw rings and educated staff to be aware and vigilant.

Caption for photo: Lt. Col. Sonny B. Avichal, Nashville Engineer District commander, left, with Kevin and Donna Jones. The Corps presented Kevin Jones with the Army Commander’s Award for Public Service after he rescued a man whose vehicle entered a water at a marina boat ramp. Kevin Jones is one of the co-owners of Wildwood Resort and Marina on Cordell Hull Lake in Granville, Tenn. (Photo by Ashley Webster, U.S. Army Corps of Engineers)