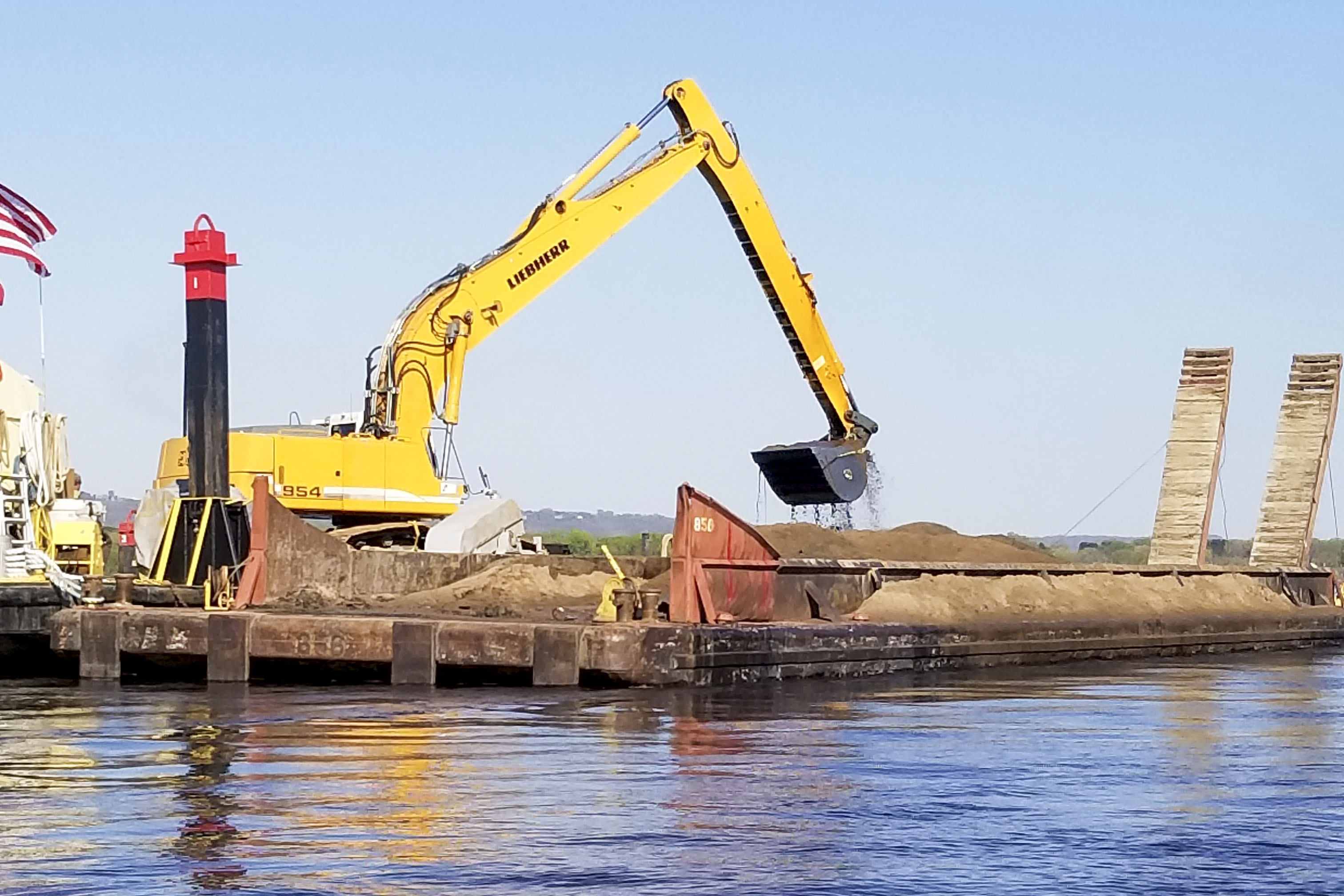 On February 4, the St. Paul Engineer District released its draft Environmental Assessment for its proposed dredged material management plan (DMMP) in Pool 6, a 14.4-mile stretch of the Upper Mississippi River from Lock and Dam 5A in Fountain City, Wis., to Lock and Dam 6 in Trempealeau, Wis.

The DMMP is a long-term plan for managing the material from maintenance dredging along the 9-foot navigation channel. Previously, the district has managed its dredged material under the Channel Maintenance Management Plan (CMMP), completed in 1996. After the Corps was questioned about its dredging practices and its lack of long-term plan in the 1970s, it instituted the GREAT I study, completed in 1980, which became the basis for the CMMP, the first set of long-term dredged material placement plans and designated placement sites.

“We’ve been using that as a living document,” said Steve Tapp, St. Paul District channels and harbors chief. “So if we have changes at the sites, we meet with the partners and endorse changes to the plan.”

As far back as 2014, the district was seeing increased flows and sediment in the river, and fewer places to put the dredged material. The St. Paul District is unique among Corps districts in that it places all of its dredged material upland. None of the material goes to open-water sites, and the clean sand is ripe for beneficial use projects. The Corps used upland properties to place sediment, which were all owned by private parties or local government. The site owners either had a use for the dredged material or the means to sell it.

This need for upland placement sites initiated the new DMMP process to find other long-term sites with greater capacity. “With all the recent increase in flows and sedimentation, we started seeing a big uptick in dredging volumes in Pool 6,” Tapp said.

As far back as 2014, river levels were rising, and sediment numbers were increasing, but the last few years, those increases have jumped dramatically. The district shattered records last year for the sheer volume of water that flowed through the system. In 2019, Lock 10, the southernmost dam in the district, saw 25.4 trillion gallons of water. The record previous to that, in 1993, was 19.2 trillion gallons.

“With all the extra water coming into the system, it’s bringing sediment with it,” Tapp said. Changes in climate and local land use have also affected the sediment load, he said.

“We dredged shallower and narrower in most of the areas we did dredge, just to ensure that we were able to get to all of the locations that did need our attention. We refer to that practice as dredging pilot channels. The intent is that we go back at a later date and clean them up better. We hope to do that in 2020, but the river needs to cooperate, and the forecast for flooding doesn’t look good,” Tapp said. The upcoming spring is predicted to be worse than last year for high water.

“Our plan right now is to start dredging early again,” Tapp said. The Corps mechanical dredge Wade will begin work in April, and the cutterhead dredge Goetz will start in mid to late April.

Starting the dredging early depends somewhat on the flow of the river, and dredging on high water can be done, but it’s not as efficient. “If the water is too high, sediment is moving around too much,” Tapp said. “But if we wait until water levels come back to normal, we’ll have problems everywhere.”

DMMP And Beneficial Use

Even if the Corps can remove all the increased sediment, it still faces challenges in placing all that material, and the new DMMP has set forth a plan for new upland sites. The Corps hosted a public meeting on February 11 in Winona, Minn., and the comment period will remain open through March 9.

DMMP planning is based on securing dredged material storage capacity for the next 20 years. According to the draft plan, Pool 6 is expected to produce 1.25 million cubic yards of dredged material over that period. Given this pool’s extensive use of beneficial use over the last 30 years, the Corps wanted the new DMMP to continue that practice. The study also identified sites for more traditional placement methods, if beneficial use methods could not meet the capacity needed.

In 2018, the Corps purchased the Homer West site, where it plans to improve access in and out of the site with railroad and new turn lanes to improve safety for trucks. Once the site is established, Tapp said, the Corps wants to open it up for free material. “We’ll try to market it, but we don’t try to sell it,” Tapp said. “Our main objective is getting rid of the sand.”

To figure out how much capacity was needed, the plan set a target minimum, based on the largest annual amount of dredged material possible, estimated from historic dredging records. The highest single dredging season in Pool 6 was 134,400 cubic yards in 2014, a year with significant flooding. Adding 33,600 cubic yards for contingency results in a target minimum annual capacity of 168,000 cubic yards.

This is a fairly small amount, compared to other pools, which is what makes management completely by beneficial use possible in Pool 6.

Then, the Corps identified possible placement sites, 30 total, which would be used in one of three ways—open beneficial use, where dredged sand would be stockpiled and removed as needed by private or local entities; permanent placement, where material would not be moved, such as mining pits; and one-time beneficial use, where dredged material is used for a special purpose, such as construction fill, or for creating or enhancing islands.

Nine sites were identified for further investigation and differentiated into three tiers. Tier I sites had both the lowest unit cost, plus met the target minimum capacity. These sites include two existing sites used for beneficial use at Winona Harbor and Homer West. Winona Harbor is owned by the city of Winona. The Corps has a real estate agreement through December 2021 to place material there, with an annual capacity at 20,000 cubic yards. The Corps owns the Homer West site, which is located downstream of Winona and has a capacity of 109,000 cubic yards.

Tier I also includes three sites, one at Homer East, and two expansion projects at Winona Harbor. The two Homer sites will take the majority of the dredged material for the next 20 years. Dredged material placed at the site would be available to the public for free. The clean sand is typically used for general construction fill, winter road maintenance or landscaping.

The Winona Harbor site has been in use since 1975, and the new DMMP includes two expansions, one small (1 acre) and one large (8 acres) for upland placement downstream of the existing site.

In the event that dredging sediment or beneficial use trends change, the plan also identifies one open beneficial use site (Tier 2) with a very high cost at Port Authority Business Park, a collection of vacant lots located on the southeast side of Winona. Dredged material at this site would be used beneficially by the city.

Finally, three Tier 3 sites provide opportunities for permanent placement at mining pits—the Yeadke Pit, Highway 43 Pit and Winona Sand and Gravel Airport Pit. They could relieve pressure at open beneficial use sites, but would come at a high cost.

After the public review period deadline in March, the project team will review comments. Barring any major changes from the review period, any comments and minor changes will be addressed in the report within a few weeks to a few months, Tapp said. From there, the draft goes to the River Resources Forum, which includes Corps partners on the river, such as the U.S. Fish and Wildlife Service, the U.S. Coast Guard and EPA.

“We let them review it and get an endorsement from them. It’s not a permit, but giving their support of the document,” Tapp said.

From there, the plan will go to the division office in Vicksburg, where Corps leadership will take at least a month for review. Tapp said the final DMMP for Pool 6 could be approved by mid to late summer.

The St. Paul District is also redoing DMMPs for Pools 2, 4 and 5. Pool 5 is complete. The Findings of No Significant Impact (FONSI) was signed on February 10. For Pool 2, the public comment period closed January 8. Reviews are ongoing and will move to partner agency and divisional office reviews soon, with anticipated completion in May. For Pool 4, the Corps team is updating the report based on comments from the public review, and the revised draft will go out for another round of public comments this summer. The Corps anticipates that report will be completed this fall or winter.