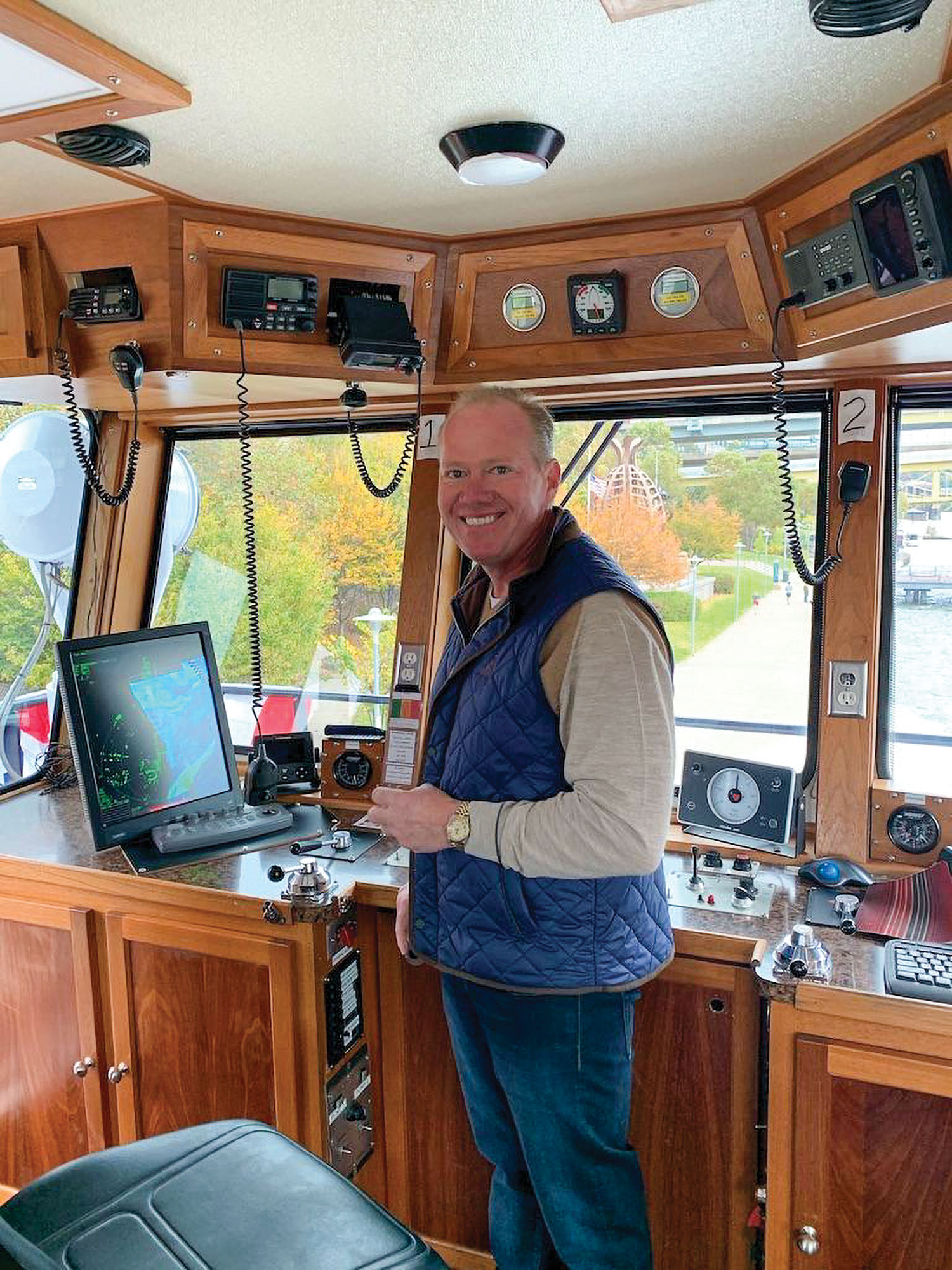 The Manitowoc 230-ton crane Brad Busatto purchased recently—as part of a derrick boat he is in the process of assembling—bears little resemblance to the one he manned as a high school student working at his dad’s terminal on the Ohio River. That’s how he got started in the business, doing summer and weekend work on the rivers around Pittsburgh in the late 1980s. His river heritage goes back much farther, however, all the way back to the 1930s.

His mother is the only daughter of Max Crain, one of the mainstays of the Pittsburgh river industry at that time, and the founder of Crain Bros. Inc., which specialized in barge, towing and salvage work. The Crain brothers—there were three of them—were pilots who got their first boat in a deal with Hillman Transportation that involved hauling coal from Brownsville to Monaca, Pa.,  Busatto said.

His father, Lynn, now retired, worked for Crain Bros. piloting the mv. Pioneer on the Allegheny River until starting his own business, Industry Terminal & Salvage Company (ITS), in 1979. Brad, who signed on full-time after graduating from the University of Denver, and his brother Max, who is an admiralty lawyer and not active in the business, bought the company from him in 2010.

Industry Terminal & Salvage provides terminal services for dry bulk commodities such as steel, coal and scrap, as well as offering towing, fleeting, repairs and salvage. When the Busatto boys bought it, ITS was operating one boat and had one landing, with nine employees. Now, it has six boats and three landings, with 75 employees, Busatto said.

In 2012, Industry Terminal & Salvage bought a 1,000 hp. towboat and renamed it the Miss Kate, after Brad’s daughter, who is working on her master’s degree in divinity at Yale University. She was featured in The Waterways Journal several years ago when she wrote a play called “Salvage” about barge workers, while she was a student at Carnegie Mellon University’s School of Drama.

The following year, the company bought an 800 hp. boat it renamed Miss Brooke, after Brad’s other daughter, who is 13 years old. ITS also expanded the fleet to include a 60-barge operation at Aliquippa, Mile 16 on the Ohio.

Not to leave out his wife, this year Busatto bought the Kimberly Jane from Kirby and renamed it the mv. Marne B. ITS converted it from a retractable-pilothouse boat to one with a fixed pilothouse, adding a bunkroom and converting the extra space into a galley.

“It’s a difficult market,” today, with coal and fracking in decline, Brad said. The coronavirus pandemic hasn’t helped either. The governor deemed road construction a non-essential business, which killed the demand for sand and gravel, much of which moves by river. “We’re down about 30 percent right now,” he said, “but the ethylene cracker plants hold promise for the barging of huge amounts of steel, concrete, sand and gravel and other construction materials.”

Busatto said he is going to continue looking for opportunities. He said the key to their success so far and what is driving future growth are the “great” employees he has at ITS. He gives them all the credit, naming Don Checkan in particular.

At present, the company has two projects in the works: a 26-foot, 500 hp. truckable boat for a company in Cleveland, Ohio, that is ITS’s first new-construction job, and a derrick boat to be built on a 148- by 54-foot barge equipped with the 230-ton crane mentioned above that is reminiscent of the one Busatto started out on some 35 years ago.

Busatto is a member of the Waterways Association and the Traffic Club of Pittsburgh. He is also the vice chairman of trustees at a college prep school in Sewickley, Pa., from which he graduated in 1988. His hobbies include traveling with his family, golf, skiing, hiking and wake-surfing. He is the co-owner of Energy Insight Technology, a start-up that owns a patent on a smart engine block heater control system.

Caption for photo: Brad Busatto on the mv. Marne B, which Industry Terminal & Salvage Company converted to a fixed-pilothouse towboat from a retractable.