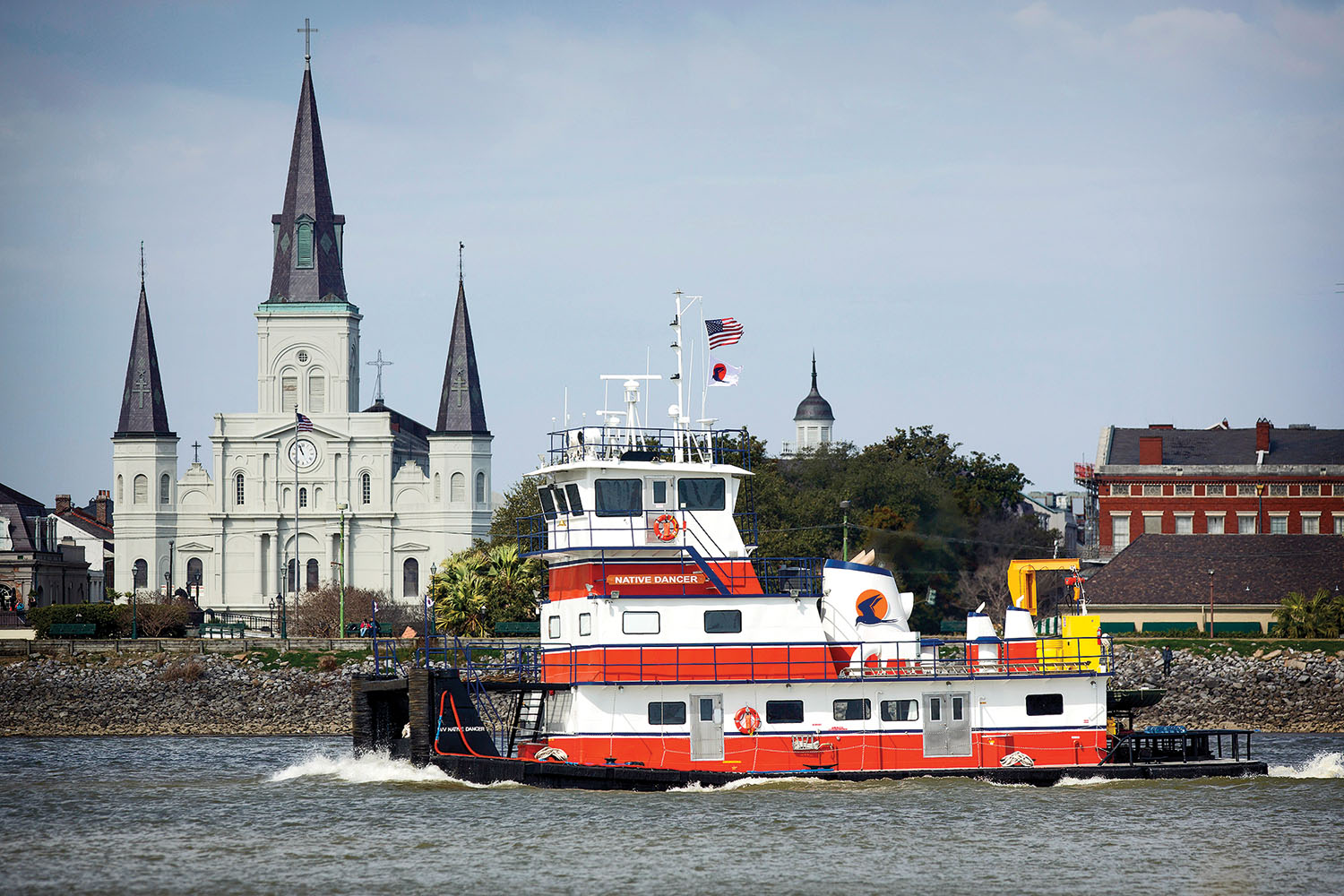 In 2020, New Orleans-based Turn Services, one of the largest independent barge fleeting and shifting companies in the United States, is marking 30 years operating on the Lower Mississippi River and the Gulf Intracoastal Waterway. From its early days when the company focused on barge cleaning and repair, to its operations now with 40 towing vessels and barge fleets on both the Lower Mississippi River and near Houston, Turn Services has experienced tremendous growth.

When Frank Morton started Turn Services in 1990, there’s no way he could’ve envisioned what the company would look like 30 years later.

“I didn’t have a play book,” Morton said. “I had two plans in my life. One was to be a priest, and that didn’t work out too well. The second was to talk Ginny into marrying me, which worked out really well. Other than that, I didn’t have a plan.”

What Morton did have was a life motto, adopted during his time as a teenager in the seminary, which has guided him in business and everyday living. The Latin phrase is translated “the best sermon is your life” or “lead by example.”

“It’s a quote from St. Augustine,” he said. “I think that’s why this [at Turn Services] worked so well. It’s because management and ownership lead by example. It’s created something we all take pride in.”

In the late 1960s, Morton had started a career in the oil industry. He met his wife, Virginia, or “Ginny,” in 1969 at the University of Southern Mississippi, and the couple married soon thereafter. But Morton wasn’t happy with his job.

“My wife said, ‘You ought to do something you want to do, something that would make you happy,’” Morton recalled.

A colleague recommended he take out a job wanted classified ad.

“He said, ‘Get a classified ad in The Waterways Journal for three weeks for a ‘rookie job wanted’ and see what happens,’” Morton said. “I did exactly as he said, and I got three requests for job interviews.”

One was in Kentucky, another was in Iowa, and the third was for Minnesota Harbor Service in St. Paul.

“My wife and I sat down and measured how far the farthest place was from Gulfport, Miss., which is where we lived at the time,” Morton said.

Morton said he and Ginny picked the job in St. Paul because it was the farthest from Gulfport, their families and what they were familiar with.

“‘We’re going to be dependent strictly on each other,’” Morton recalled saying to Ginny. “It was the best thing that ever happened to our marriage.”

The Mortons moved to St. Paul in 1972 for his first full-time job in the river industry. By the next year, they moved to New Orleans, where Morton worked for American Commercial Barge Line (ACBL). In 1978, Morton started his own venture.

Turn Services owes its founding to Electro-Coal, later known as United Bulk Terminal, a coal and pet coke transfer facility on the east bank of the Mississippi River near Davant, La.

“They had contacted barge lines about taking barges that had been loaded with coal and reloading them with northbound cargoes,” Morton said. “Electro-Coal and the barge lines were looking for someone to go down there and clean barges.”

“I went down there and cleaned a few barges,” he recalled. “It was very time-consuming, and the program didn’t really work, but we were very successful at cleaning barges.”

Soon he acquired two deck barges and designed a piping system to convert them into mobile barge-washing units. He positioned one in Baton Rouge and the other at Burnside Terminal, upriver from New Orleans near Darrow, La.

“I went up and began cleaning and repairing barges there and running their fleet,” Morton said.

The timing and location would prove providential. About the same time, David Fennelly had started Associated Terminals, and both Fennelly and Morton would meet through their work at Burnside Terminal.

Morton would later move the operation back down to the Davant area, where Turn Services offered barge fleeting, cleaning and repair for Electro-Coal, International Marine Terminal (IMT) and ACBL. Remarkably, Turn Services did all that without owning a single towboat. The company for its first 10 or 12 years only leased horsepower needed to run the fleet.

Soon enough, Morton was looking to grow the business even more. And in 2004, he joined forces with Gary Poirrier and Fennelly, co-chairmen of Associated Terminals.

Turn Services became the primary fleeting and shifting provider for Associated Terminals, which offers midstream cargo transfer and terminal operations at locations in Louisiana between Port Allen and Myrtle Grove.

“The synergies between their activities and our complementary activities made a good fit,” Morton said. “It worked very well, and David and Gary had the same kind of operation that I did, with good people, paying them well, taking pride in building a business that gives people good jobs, with good pay that supports families and enables them to thrive. It’s been a good partnership.”

Morton emphasized the importance of putting people first and maintaining a connection and supporting vessel crews and fleet workers.

“‘It’s what we do for a living,’” Morton said, quoting a mantra he often uses. “I stole that idea from a young man I met in 2005 before Katrina hit, and his name was Mario Muñoz.”

Morton and Muñoz, who worked for ACBL at the time, were at a meeting of the American Waterways Operators (AWO) in Biloxi, Miss., and went out for a po-boy. Making conversation, Morton asked, “What do you think is the No. 1 issue facing this industry?”

Muñoz said what he remembers most about that meal conversation was the instant connection he and Morton shared.

“He became a mentor for me in the industry when I was still a young guy at ACBL,” Muñoz said. “And it wasn’t just me. He shares his insight, knowledge and wisdom with so many people. That’s what makes Frank such a great ambassador for our industry.”

Muñoz said that ambassadorship is what made Morton an effective chairman of AWO.

“He has always been one who would share what we do in the industry and the good we do as an industry, not just with political leaders, but with anyone really who wants to know about the industry,” Muñoz said. “He’s always been involved in advocating for the industry, always a great representative.”

So when Morton took on a three-year leadership commitment with AWO in 2012 which would require him to step away from his full-time role with Turn Services, he immediately thought of Muñoz, who began as president of the company in October 2012. Morton continues to serve as director. The rate of growth at Turn Services has accelerated in this latest chapter of the company’s history. Besides the growth of its fleet of towing vessels, the company has added to its fleeting locations over the past year, with Dockside Fleet in New Orleans coming online as well as the operation of InterGulf Fleet in Houston. The company has also added lock tripping, “last mile” towing and towboat chartering to its list of services.

Muñoz said the company continues to assess and pursue growth opportunities, so long as they fit within the company’s strengths.

“We don’t grow just for the sake of growing,” he said.

And as Turn Services has experienced significant growth over the past 10 to 15 years, its defining “people first” philosophy has been a key to its success.

“We have to make sure we maintain that mentality as we grow, and as we’ve grown over the last several years,” Muñoz added. “Honestly, a lot of that philosophy came especially from Frank.”

Just as important has been Turn Services’ commitment to the communities in which it operates and where its team members live.

“What is equally important to us is to find ways to give back to our employees, the communities in which they live and have their families, and to realize that, without community and a healthy and enthusiastic workforce in any geographic area, you really don’t have what it takes,” Fennelly said. “Again, it comes back to the people.”

That community commitment has taken many forms for Turn Services, from its Glenn Otero Memorial Golf Tournament that benefits Children’s Hospital to partnerships with organizations like United Way, Arc of Greater New Orleans, Raphael Village, Volunteers of America and the New Heights Therapeutic Riding Center in Folsom, La.

“We feel that, as an industry and as a company, it’s very important to find those opportunities and to give back at every turn we can,” Fennelly said. “The slogan for Turn Services is ‘one good turn deserves another,’ and so we find that it’s very fulfilling for us individually and as a company, and we know it’s appreciated by the communities in which we operate.”

Looking back over the past 30 years, Fennelly said it has been a remarkable adventure for both Associated Terminals and Turn Services, an adventure and a success story made possible by the people.

“It’s been quite a journey,” Fennelly said. “Even though it seems like a very long period of time, it’s really a very short period of time. We all know across our industry and just like every industry that the people are the heart and soul of our business. We have a team that has been assembled that really is second to none.”