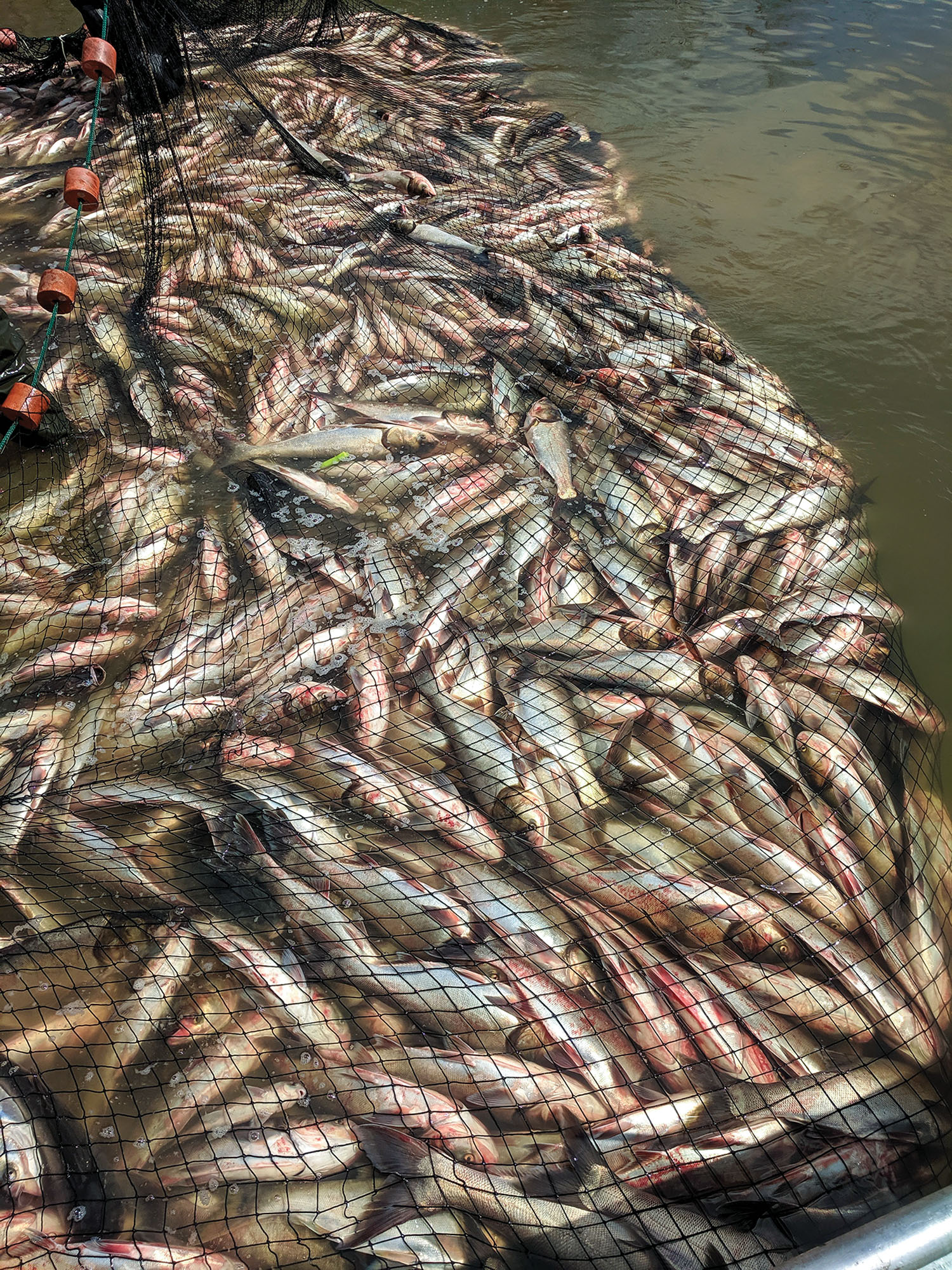 A commercial fisherman harvested close to 60,000 pounds of Asian carp from one bay in 48 hours as part of a fishing method being tested in Kentucky for the first time.

Often referred to as either haul seining or beach seining, the method involves running a net out into the bay and scooping fish to the bank, hauling the net in with a winch and by hand. Wade Robbins, owner of Robbins Fishery, conducted the test in Kentucky Lake’s Pisgah Bay from the afternoon of March 19 to the morning of March 21.

“It’s new in Kentucky,” Robbins said. “It’s been used for probably a century. It’s been perfected by the guys out of Browning, Ill., to use for Asian carp.”

Robbins moved to Eddyville, Ky., from Iowa last year to fish the state’s lakes and rivers for the invasive carp species full-time.

“Kentucky has some good programs going on and large numbers of Asian carp,” he said.

He has previously employed haul seining on the Upper Mississippi River in Iowa, Illinois and Missouri.

“Most commercial fishermen are very familiar with it up north,” Robbins said. “They catch millions of pounds a year in them.”

He noted that the method is not meant to replace other harvest methods, including the modified unified method the Kentucky Department of Fish and Wildlife Resources and its partners tried in February in the same bay. In the modified unified method, several boaters work together with nets and underwater sounds to section off parts of the bay until the carp are removed from the small remaining area.

“The unified method is a completely different method, and they both have their places,” Robbins said.

For the best results, haul seining requires an experienced fisherman, he said.

“A person using it really needs to understand Asian carp and how they react and what they will do,” Robbins said. “When the school is large enough, very seldom are there any game fish in there at all because they get scared away.”

Any game fish that do happen to be caught in the net come to the surface and are quickly removed using a dip net.

“The actual haul went fairly well, and we were able to harvest roughly around 52,000 to 60,000 pounds of just silver carp with maybe only around 10 game fish, which were all able to be released,” Robbins said.

One challenge of the method is that it can remove structures built to create game fish habitats. The Kentucky Department of Fish and Wildlife Resources is allowing the method to be tested on both Smith Bay and Pisgah Bay, the same bays where the modified unified method was used earlier this year.

To allow catches of that size, however, Robbins said it will be important to have fish processors able to take that size of catch.

“Being able to move them is the big issue,” he said. “If the market is open and can receive any amount we catch, the actual numbers would go up tremendously from what we are able to do now.”

For the recent trial, he was able to make arrangements with a company from Illinois that turns the carp into fish meal. The company sent two tractor-trailers that met Robbins nearby to haul in the catch.

Robbins said he also has permission to try the method in the Ohio River, although he is waiting for the water level to come down first. Although haul seining is generally best in cool water, he said successful harvesting can take place in the rivers in the warmer months because of the flow from the river current. Also, he said, river carp are more robust.

“If they permanently approve it for the Ohio River, it’s going to be a huge game-changer, but they need positive results from tests first,” Robbins said.

Ron Brooks, aquatic nuisance species program director for the Kentucky Department of Fish and Wildlife Resources, said the testing is part of the Experimental Gears Program that KDFWR developed to consider new ideas and approaches in the fight against Asian carp.

“Through this program, first utilized for the Modified Unified Method effort in February on Kentucky Lake, approved research entities can test gears and methods for Asian carp removal,” Brooks said. “None of the experimental gears are currently legal for commercial fishing. The research entities must schedule tests with Kentucky Fish and Wildlife staff, who must be present at all times testing occurs to observe the methods and take data, including site locations, gear types and methods used, species collected and harvested, disposition of bycatch, weights of Asian carp harvested, and efficiency measures.”

He continued, “The primary goal of the program is to develop new regulated programs using methods that will allow a number of qualified fishermen to participate and result in significantly increasing annual Asian carp harvests from Kentucky and Barkley lakes.”

Brooks said KDFWR was encouraged by the results of the seine haul test on Kentucky Lake and that, additionally, the modified unified method effort in February showed enough promise that the department intends to expand testing to more bays this year and next and to test significant modifications to the corralling effort and final harvest techniques.

“Kentucky Fish and Wildlife is working hard to provide incentives and programs for commercial fishermen to focus Asian carp harvest efforts in two specific regions: Kentucky and Barkley lakes, and in the Ohio River near Louisville,” Brooks said. “The majority of the department’s programs and assorted efforts focus on Kentucky and Barkley lakes and their tailwaters. The reservoirs are immensely important to anglers and boaters, as is the huge tourism economy centered on them.”

He added, “We see this new Experimental Gears Program as another tool that can help turn up the pressure on these invasive fish.”

“I am very excited about this new method, and the first try appears to be very successful,” he said.

Although he said he understands the importance of KDFWR thoroughly testing it out, including making sure that game fish are not caught in large numbers or significant damage done to their habitat, he said, “I am thankful they are trying this new method and congratulations to Wade Robbins for pushing to test this for months. I was glad to join him in asking for this test to take place, and I have high hopes more can be trained to do this method, and we can dramatically increase our catch.  I look forward to this process getting better, more using it once approved and the opening up of more avenues to sell these fish in large quantities. Our goal is not to sustain a market in our lakes but to eradicate as many as possible from our lakes.”

Caption for top photo: Silver carp, a variety of Asian carp, are hauled in a seine at Kentucky Lake’s Pisgah Bay, part of an experimental test of the haul seining or beach seining method. (Photo courtesy of Robbins Fishery)