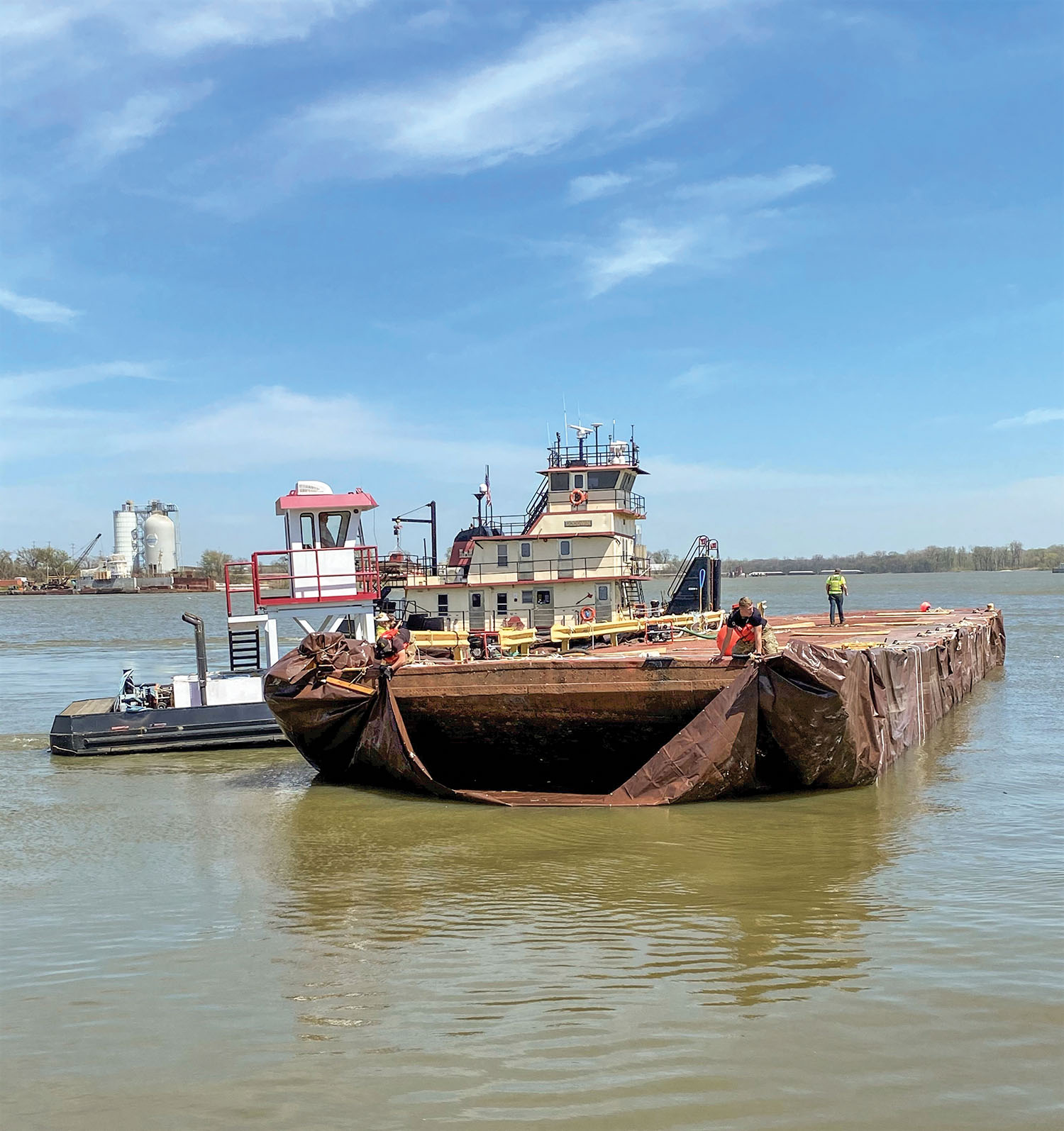 Chrisco said the stringout consists of barges that are 1900–1945 vintage and have been in use at Ensley since the 1960s.

The dive team started working March 2 and had been scheduled to stop work on March 26, but due to the coronavirus pandemic, the dive team’s future jobs were canceled, so the teams worked together to keep the detachment there for an additional week to complete more repairs on the east ramp.

“The 15-person dive team successfully removed one barge from the string-out,” Chrisco said. “All eight compartments of the barge were totally flooded as divers reported that the bottom of the barge had more holes than Swiss cheese. They held several brainstorming meetings using creativity, teamwork and dedication to work through the process to come up with a solid plan to get the barge stable enough for removal and transfer to the bank.”

Chrisco said the team used plugs, plywood patches with glued salvage matting, to perform a seal. They used three heavy-duty tarps that wrapped the hull to assist in sealing the pin holes, as well as around the installed plywood patches.

“Members from each team were called on to do things that varied from making threaded rod anchors and ordering parts and supplies and an underwater scaffold for the divers to work from to moving heavy equipment and supplies from job site to job site,” Chrisco added. “The confined space rescue team assisted with air monitoring, the metals shop fabricated materials to assist in pumping out the flexi floats and cutting the metal straps that attached the barge to surrounding barges, the motor vessels assisted with towing the salvaged barge to the west bank. … It was a total team effort.”

With the failing barge completely removed from the stringout, the mv. Goodwin maneuvered a replacement barge into place the same day, leaving Ensley Engineer Yard better prepared to support maritime operations for many more years to come.

“This mooring facility is well situated along the inland system and can be used strategically to provide repair services for more than just the Memphis District; it can be used by the entire Corps fleet,” commented Chrisco. “This critical work doesn’t just benefit our district.It serves to benefit the entire Mississippi Valley as well.”

This article originally appeared on the Memphis Engineer District’s website. It is reprinted with permission.

Caption for top photo:The mv. Goodwin and Ensley Engineer Yard’s truckable towboat remove the barge from the stringout and reposition it for transit to the west bank of the engineer yard for disposal while Army divers attach the front edge of the tarp for transit. (Photo courtesy of the Memphis Engineer District)