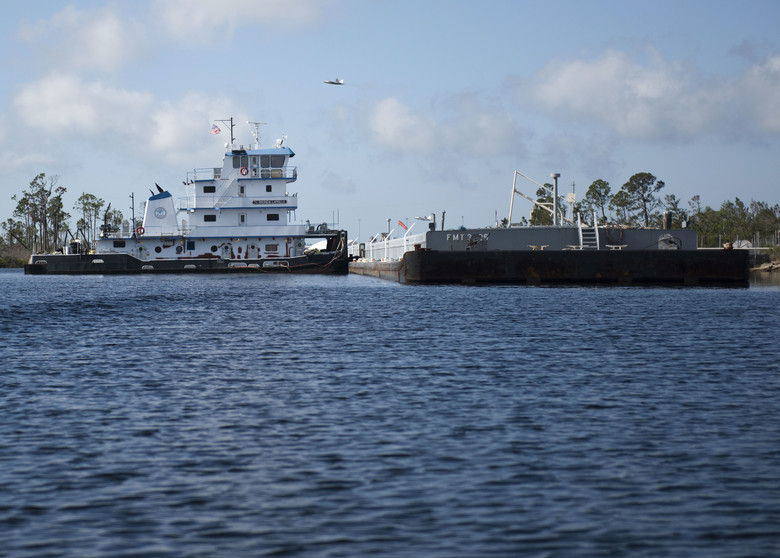 “I noticed what looked like a Sea-Doo or a little watercraft off my starboard bow,” Boudreaux said. “It was yellow and white, but I couldn’t tell if it had anyone on it.”

Boudreaux quickly grabbed his binoculars to confirm the watercraft was indeed unmanned, then sounded the general alarm. He stopped the Rhonda Lamulle and his tow of two tank barges, essentially marking the location of the watercraft, and radioed the U.S. Coast Guard. Both a nearby fishing vessel and a Florida Wildlife Conservation (FWC) patrol boat heard the call and responded to tow the watercraft back to shore.

Getting back underway, Boudreaux sent steersman Jesse Hansford to the head of his 600-foot tow to keep watch as the Rhonda Lamulle crossed the Pensacola ship channel. Boudreaux said this was standard practice for crossing the pass, but it took on added significance on that moonless night. Just a few miles west of where they saw the watercraft, Hansford radioed up to Boudreaux.

“While he was out there, he says, ‘Cap, can you shine your light to the starboard side? I thought I heard voices,’” Boudreaux said. “We had a ton of seagulls on the barges, the waves, the wind was blowing 20 or 25 mph., the barges were creaking, and he heard voices. When I shined it to my starboard side, about 75 feet off the side of our barges there were two people in the water.”

Boudreaux again sounded the general alarm and signaled “man overboard.” As he radioed to the Coast Guard, Hansford and tankerman Derrick Jones launched the Rhonda Lamulle’s rescue skiff. Also responding that night were relief captain Jason Rogers and deckhand Michael Dennis. Boudreaux said he saw the blue flashing lights of a Florida Wildlife Conservation boat in the distance. He shined a spotlight toward the FWC patrol boat as a signal.

“He knew what I was getting his attention for,” Boudreaux said. “That man, I guarantee you he had that boat on full throttle getting to us. It took him maybe three minutes to get to my guys.”

Hansford and Jones came alongside the two young women in the water and secured them to the side of the skiff, then helped them aboard the FWC boat when it arrived. Boudreaux said the women had been knocked off their personal watercraft several hours earlier and were exhausted. With a 20-knot wind and ebbing tide, the women were close to being lost at sea.

“The sea conditions that night, a couple more hours and I don’t think those girls would’ve survived,” Boudreaux said. “They were in a bad spot. They weren’t too far from going offshore.”

Boudreaux said the crew members were able to call and check on the two ladies a few days later. They’re both doing well. One serves in the U.S. Navy and is actually stationed at Naval Air Station Pensacola, one of the bases the Rhonda Lamulle regularly calls on.

Boudreaux praised his crew for their readiness and quick response that night.

“I am personally very proud of my crew and their calmness and alertness to be able to come together to let these young ladies go home to their families,” he said. “This was the perfect ‘needle in a haystack’ rescue. When God shows us his presence, it is up to us to step up and do our part as his children.”

This isn’t the first water rescue that Boudreaux and his crew have been part of. Boudreaux recalled a couple running aground a couple of years ago and the Rhonda Lamulle helping pull them free. Before that, the crew was transiting the Mississippi River when a nearby crew boat capsized. Quick action allowed them to pull those mariners from the water without harm. Another time, when an elderly couple was out boating and caught in a squall, Boudreaux let them come alongside the Rhonda Lamulle until the storm passed.

Boudreaux said, while that watchfulness is part of their job as mariners operating on a crowded stretch of the Gulf Intracoastal Waterway, it’s also just part of being a fellow human.

“It’s part of our job to be vigilant, to be alert and watch our surroundings,” he said. “If we can help anybody, as mariners or as human beings, it’s our job to help. It’s our responsibility to try to help, no matter who it is, no matter where it is.”

Caption for photo: The Rhonda Lamulle at work.