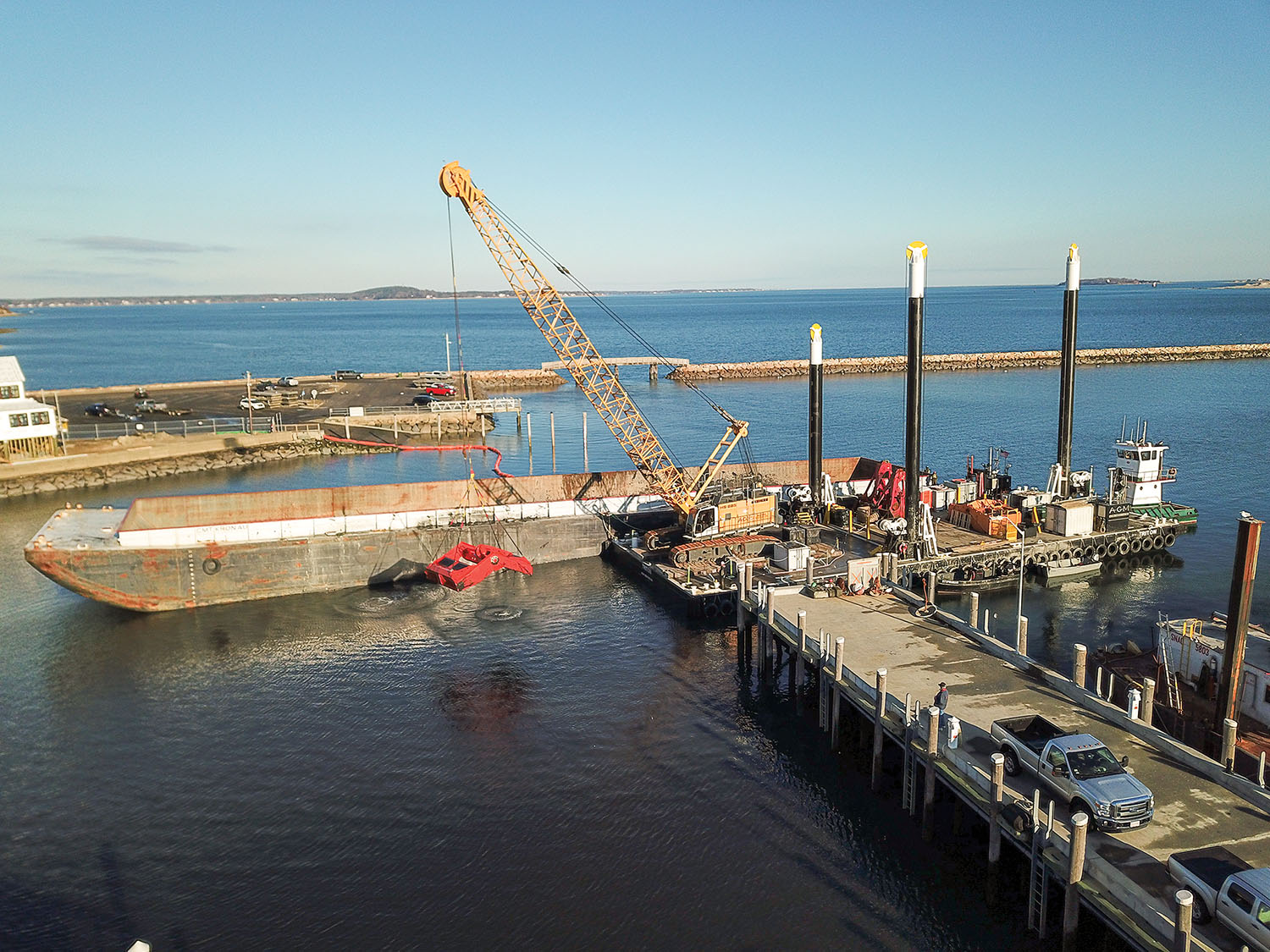 May 5, 2020 By International Dredging Review

December 2020 marks the 400th anniversary of the landing of the Pilgrims in Plymouth, Mass. In anticipation of the anniversary, the town of Plymouth undertook a multi-year effort to dredge the federal channel, turning basin and anchorage and waters around the Frazier State Pier and commercial piers.

The project had two components. Dredging began on the federal channel, turning basin and anchorage in the fall of 2018, continued into the winter of 2019 and—following a shutdown for a time-of-year restriction on dredging during the summer of 2019—wrapped up in January 2020.

Assisting Burnham during the first phase of the project were AGM Marine Contractors Inc., of New Bedford, Mass., and Cashman Dredging & Marine Contracting Company LLC of Quincy, Mass. Burnham used its dredge Samson and a complement of 600-, 2,000- and 3,000-cubic-yard dump scows on the project.

In addition to the Corps project, the town of Plymouth, with support from the Commonwealth of Massachusetts, undertook a project to dredge the Mayflower II’s berth at the Frazier State Pier and waters around the town’s commercial piers. The Mayflower II has been undergoing a multi-year restoration at the Henry B. Dupont Preservation Shipyard in Mystic, Conn,, and is scheduled to return to Plymouth in May of 2020 for the 400th anniversary celebration.

Planning and permitting for the project was a multi-year effort undertaken by the town’s Department of Marine and Environmental Affairs and GEI Consultants. During the project’s permitting phase, it was determined that contaminant levels in the sediment precluded disposing of it offshore, and that the sediment needed to be disposed of at an upland facility.

In December 2019, AGM was awarded a $5 million contract for the town project to remove 12,500 cubic yards of material with disposal at an upland facility selected by AGM. Completion for the project was required no later than the end of January 2020, due to environmental permit restrictions. Dredging began immediately, starting at the Mayflower II’s berth before moving to the town’s T-wharf. Due to the tight timeline for the project and need to limit re-handling, AGM selected Clean Earth in Kearny, N.J., to handle the sediment processing and upland disposal. AGM utilized its dredge Triton Liebherr HS-885 HD crane, 9-cubic-yard Cable Arm Environmental bucket and four hopper barges to complete the project.

Both projects, and all three dredging companies, relied heavily on Cable Arm Environmental buckets to successfully complete the projects. On the federal project, the oversized footprint and level cut of Burnham’s Cable Arm Environmental bucket allowed Burnham to efficiently cover a very large dredge footprint with shallow cuts while limiting material removed below the dredge depth.

The design of Cashman’s Cable Arm Environmental bucket allowed it to be constructed to maximize its footprint and bucket volume while not sacrificing its ability to dig the sediment. Constructed of high-strength steel, this design helped minimize the bucket’s weight and allowed Cashman to remove large volumes of material in a short amount of time.

On the town’s project, the long distance from the project site to Clean Earth’s facility and the cost to offload, process, transport and dispose of the sediment made it imperative that the removal of water and sediment below the dredge prism be limited and precise. Normally on dredging projects, the contract allows the dredger to dig up to 1 foot deeper than the specified depth as a “tolerance window.” But the Cable Arm bucket’s level cut operation was so precise that the dredge was able to save the cost of dredging and disposing of thousands of cubic yards of material.

AGM’s Cable Arm Environmental bucket allowed the dredge to tighten its digging depth control, which greatly reduced the removal of excess material beyond what would be expected with a conventional bucket. The efficiency of the Cable Arm Environmental bucket resulted in a significant cost savings to the town, allowing the town to authorize AGM to complete additional dredging within the prism, covering more square footage, while still completing the project within the permit window.

Due to the ongoing COVID-19 crisis, it’s unclear if the anniversary celebrations that were originally scheduled to begin this May will take place.