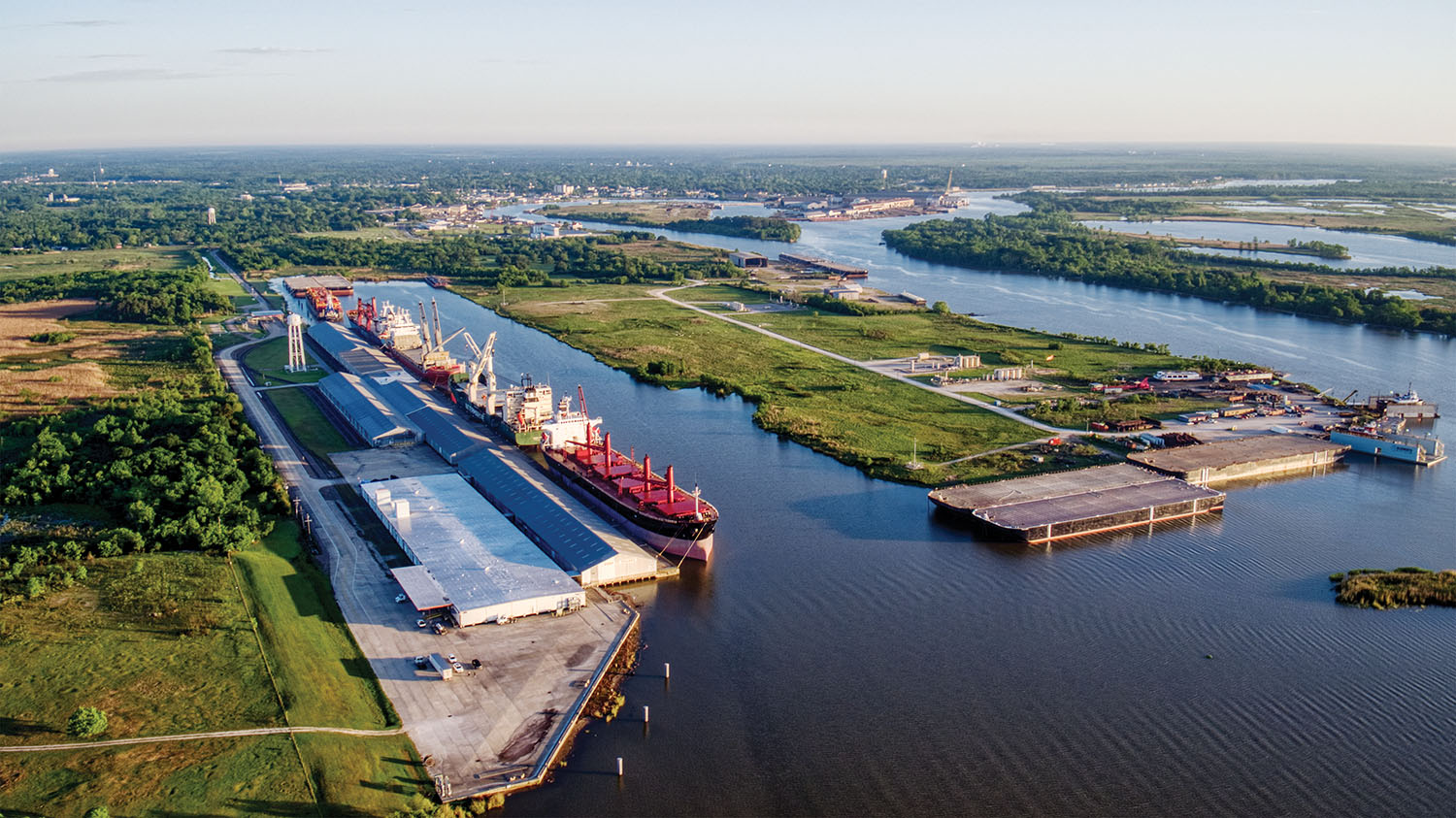 For those who live and work along the Sabine-Neches Waterway in southeast Texas, the sheer might of the area’s energy production is no secret. Even passersby on Interstate 10, near the upper reaches of the waterway at Beaumont, can catch a glimpse of the region’s vast energy infrastructure.

Beyond the area, known locally as the “Golden Triangle,” its significance to the nation and the world through the production, trade and transportation of energy products may go largely unnoticed, but its impact is nonetheless huge and far-reaching.

Three of the top 10 refineries in the United States are located along the waterway, including Port Arthur’s Motiva Refinery, the largest in the nation by production volume. Pipelines from the area daily send refined products to the Midwest, Southeast and Northeast. And the region is home to the largest concentration of liquified natural gas (LNG) facilities in the nation, with 85 percent of the total U.S. export of LNG taking place on the Sabine-Neches Waterway, according to the U.S. Army Corps of Engineers.

Serving and supplying those energy producers, along with the full spectrum of maritime operators, are the ports along the Sabine-Neches Waterway, including the ports of Beaumont, Orange and Port Arthur, the Sabine Pass Port Authority and the overarching Sabine-Neches Navigation District.

At the upper end of the waterway, on the Neches River, is the Port of Beaumont, a hybrid port with both tenants and port-operated facilities. From a tonnage standpoint, Beaumont dwarfs the other Sabine-Neches Waterway ports, and most others in the nation as well. In 2018, the port’s public facilities handled about 6.5 million tons of cargo. Add in the private facilities, though, and the port’s tonnage swelled to 100.2 million tons. That ranks fourth in the nation and represented a 44.3 percent growth in tonnage between 2008 and 2018.

“A strong energy market lent itself to the announcement of $54 billion in announced industrial projects along the Sabine-Neches Waterway over the last 10 years, which had ripple effects,” said Ernest Bezdek, director of trade development for the Port of Beaumont. “When the market is good, petrochemical products are flowing, which encourages development. With that demand, additional storage capacity is needed, which creates jobs, and the increase in demand fuels additional industrial growth, which leads to an influx of project cargo to build new facilities or expand existing facilities.

“Once expansions are complete at the ExxonMobil Beaumont refinery, the Beaumont-Port Arthur area will be home to the two largest refineries in North America (Motiva and ExxonMobil), with a combined refining capacity of more than 454.79 million barrels per year,” Bezdek added.

Besides the deepwater Sabine-Neches Waterway, the Port of Beaumont has connections to Interstate 10, U.S. highways 96 and 287, a host of Texas state highways and the Union Pacific, BNSF and Kansas City Southern railroads.

Over the past year, the port has handled a record amount of wind turbine components through its partnership with Vestas Wind Energy.

“Our unique rail infrastructure allows us to easily handle the massive wind blades and tower sections and move complete unit trains on a regular basis,” Bezdek said. “As one of the first ports in the nation to handle large wind blades via rail, we are continually seeking ways to optimize operations and meet the needs of customers.”

The port has also seen significant growth in its bulk cargo handling, with bulk terminal operator Kinder Morgan setting records for imported aggregates, due primarily to road and expansion projects in southeast Texas. The port, home to the U.S. Army’s 842nd Transportation Battalion, also ranks as the top commercial military outload port in the nation.

“The relationship the port has with the U.S. Army is critical for national security efforts,” Bezdek said. “We work very closely with the military to ensure they have the resources needed to do their job well, and we have built a collaborative relationship that has led to many successful military exercises.”

Due east from Beaumont, on the Texas side of the Sabine River, is the Port of Orange, a shallow-draft port that serves barges, container and breakbulk ships, and vessels involved in servicing the offshore oil and gas industry. Orange is also home to a number of repair and construction facilities, including Conrad Orange Shipyard, Bludworth Marine’s Orange Shipyard and Sienna Shipyards LLC.

Lorrie Taylor, executive port director and CEO for the Port of Orange, said port officials hope to see continued diversification and development of port land, including a 60-acre greenfield with both rail and water access, as the region experiences industrial growth and the waterway is expanded in the near future.

“As the Sabine-Neches Waterway expansion project moves forward in the future, marine traffic is going to substantially increase the need for additional lay berth services at the Port of Orange,” Taylor said. “Additionally, the port can provide land development for services that would support and sustain this project along with any other future industrial development in and around Orange County.”

At the southern end of the Golden Triangle is the Port of Port Arthur, named for Arthur Stilwell, who, in the late 1800s, founded several railroads and towns between Kansas City, Mo., and the Gulf of Mexico with the goal of connecting farms in the Midwest to the nation’s Southern coast. Today, that railroad remains as the Kansas City Southern Railroad, and the southern terminus of that dream is Port Arthur, Texas, and its port.

Today, the Port of Port Arthur handles a diverse mix of cargoes for import and export.

The port is in the midst of building out Berth 5, a 600-foot berth with backlands for outside storage. That project should wrap up during the fourth quarter of this year. After that, the port will add another 1000-foot berth at a cost of $55 million, supported by a $20 million federal Better Utilizing Investments to Leverage Development (BUILD) grant.

“With the two berth expansions, the port can infiltrate new cargo markets for outside storage,” Theriot said. “The port has acquired new properties recently, and we have an ongoing plan to purchase more land and structures to create economic growth.”

Farther south, near the start of the waterway, is the Sabine Pass Port Authority (SPPA), which offers dock space for commercial fishers and smaller vessels serving the maritime industry. The port offers 1,200 feet of waterfront mooring space, with an additional 500 feet planned for 2021. The Sabine Pass Port Authority also operates a full-service marina, which underwent a complete overhaul last year.

Like the other ports within the Golden Triangle, officials with the Sabine Pass Port Authority are expecting significant growth as a result of continued LNG investment and the Sabine-Neches Waterway expansion.

“It is anticipated that the ship traffic will significantly increase in the Sabine-Neches Waterway, and there will also be more ships anchored offshore that need to be tended to,” said Mic Cowart, port manager for the Sabine Pass Port Authority. “SPPA will be able to support industry and the shipping companies by having port facilities that supply vessels and barges can moor at that are centrally positioned to efficiently response to all business needs.”

The deepening project for the Sabine-Neches Waterway will increase channel draft from 40 feet to 48 feet, a draft increase that will benefit ports all along the waterway. Bezdek said, for the Port of Beaumont, that will amount to a 20 percent increase in capacity for vessels calling on the port’s bulk terminal and grain elevator.

“This also applies to all of the private terminals along the waterway, which will significantly increase our annual tonnage,” Bezdek said. “The expansion project will also widen the channel at certain areas, enabling faster transit for ships along the Sabine-Neches Waterway. This is a much-needed improvement that is long overdue.”

And while ports and terminals in the Golden Triangle will see growth from the waterway expansion, the project’s benefits will reach far beyond southeast Texas to the entire nation and the world.

Caption for top photo: An aerial of the Port of Orange, including both moored cargo vessels and a view of greenfield space available for development. (Photo courtesy of Port of Orange)