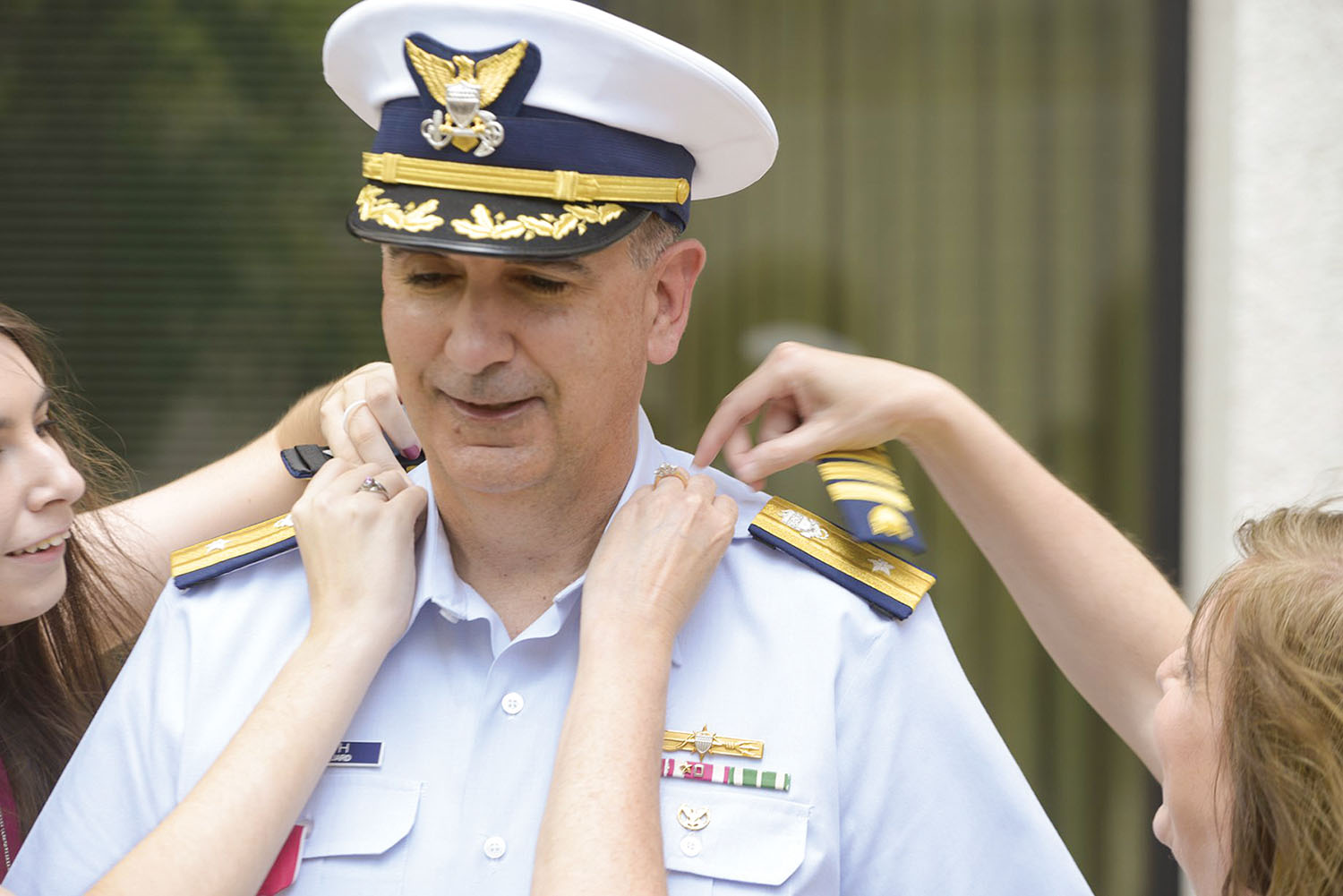 The U.S. Coast Guard gained a new rear admiral, lower half, May 22, with the frocking of Capt. Shannon Gilreath, outgoing chief of staff for the Eighth Coast Guard District. Gilreath’s new post will be at Coast Guard Headquarters.

Gilreath was nominated for the promotion in February. He was confirmed May 21. The frocking ceremony was held outside of the Eighth District’s headquarters in downtown New Orleans.

“The Senate confirmed him about 18 hours ago, late yesterday afternoon,” said Rear Adm. John P. Nadeau, commander of the Eighth District, who presided over the ceremony. “This is probably the shortest time frame to elapse between a confirmation and a frocking.”

Nadeau said, in serving as a rear admiral in the Coast Guard, Gilreath is part of an elite—and very small—group of flag officers. Of the roughly 40,000 active members of the Coast Guard, there are about 7,000 commissioned officers.

“Of those 7,000, we have 17 rear admirals, lower half, serving,” Nadeau said. “So it is an incredible privilege to be selected.”

Gilreath’s wife, daughter and son were all on hand to assist in the frocking. His wife and daughter placed Gilreath’s new shoulder boards on his uniform, while his son presented him with the flag officer’s combination cap.

Gilreath then took the oath as a flag officer, at the conclusion of which he and Nadeau exchanged socially distanced elbow bumps in keeping with current COVID-19 restrictions.

Addressing the crowd gathered outside the Eighth District’s headquarters in downtown New Orleans, Gilreath first spoke on faith and family.

“Let me first thank God,” he said. “I would not have had any of these opportunities without God blessing me, and he’s blessed me with a wonderful family, with a wife and two children who I love with all my heart.”

He also recognized his parents, sister and in-laws for supporting him through three decades of service in the Coast Guard.

Gilreath’s parents, watching a livestream of the ceremony on Facebook, replied in real time.

“Twenty-nine years ago, we were such a happy family when you graduated from the academy,” Gilreath’s mother, Anita, said. “After four long years, you were beginning your career and we were so thrilled. During those 29 years we traveled many miles to visit your family and have loved watching you advance in your career. It was such an honor to watch this morning as you were promoted to the rank of rear admiral. We are so proud of the person you are!\Congratulations\from your family in Georgia!”

Gilreath went on to thank the Eighth District crew, which he said was representative of each Coast Guard member he has served alongside during his career. He also recognized retired Capt. Frank Paskewitz, commander of Sector New Orleans during Hurricane Katrina in 2005. At the time, Gilreath was commander of Marine Safety Unit Baton Rouge, La.

He also credited Paskewitz with always emphasizing the importance of working with others in the community outside of the Coast Guard.

“One of those people is here today, and that’s Cherrie Felder,” Gilreath said, recognizing the longtime maritime industry leader and vice president of Channel Shipyard. “Cherrie, you represent to me the industry partners I’ve had throughout my career. I can’t thank you enough for that type of leadership you’ve shown me and the ability to develop those relationships with others in the industry. It’s critical for our long-term success with each other and how we serve our country best.”

Gilreath closed by thanking his high school service recruiter, who originally pointed him toward the Coast Guard, and a number of other Coast Guard officers.

Gilreath is a 1991 graduate of the U.S. Coast Guard Academy. He also holds a juris doctorate, which he received from Tulane Law School in 2001. Previous posts include deck watch officer aboard Coast Guard Cutter Northland, marine inspector at Marine Safety Office New Orleans, commanding officer of Marine Safety Unit Baton Rouge, staff attorney for the Eighth District Legal Office, chief of prevention law at the Office of Maritime and International Law and deputy and sector commander of Sector Honolulu. Prior to this post in New Orleans, Gilreath was chief of the Coast Guard’s Office of Maritime and International Law at Coast Guard Headquarters.