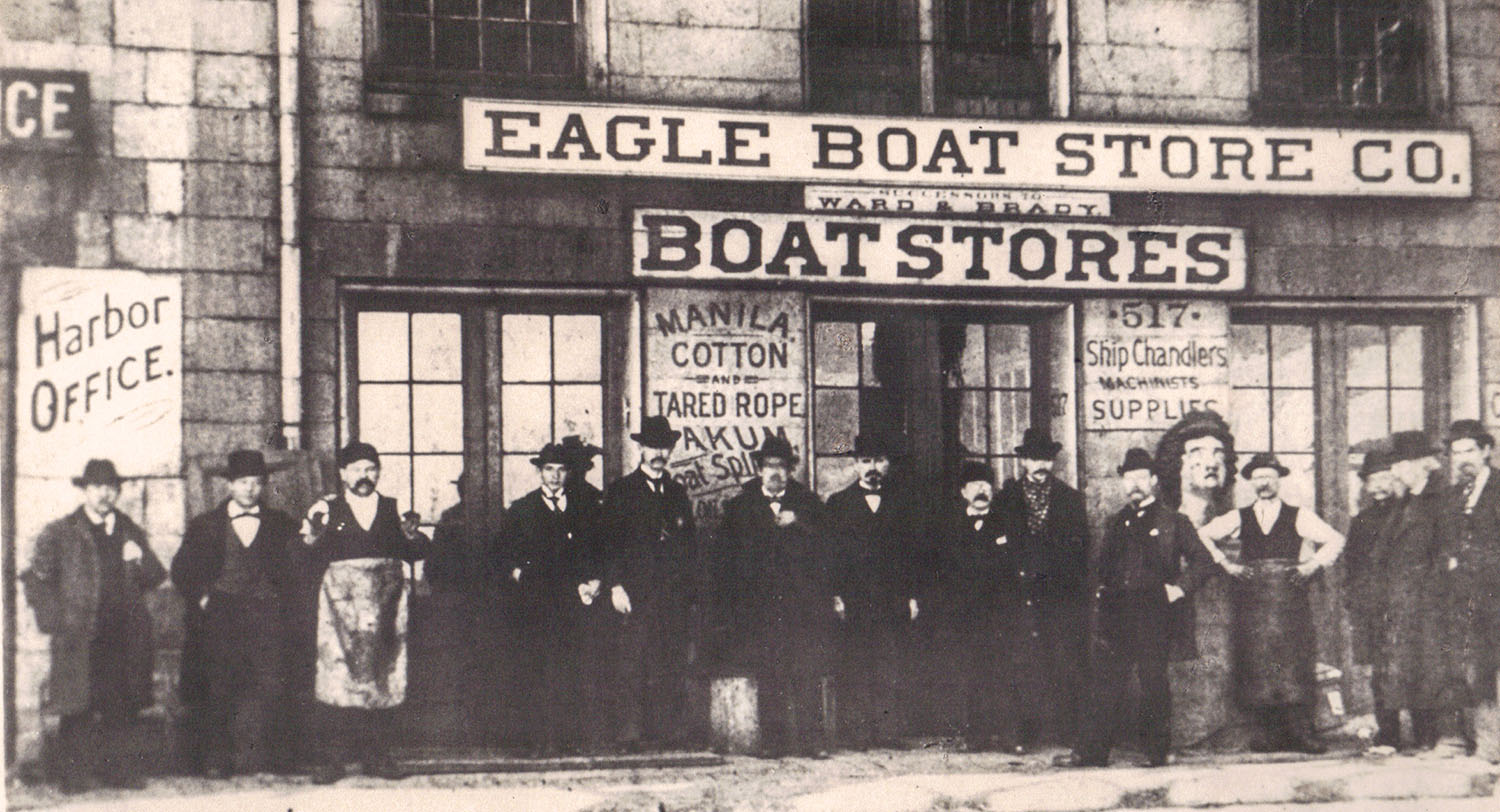 There were numerous ship chandleries along the waterways that provided all manner of supplies to riverboats. One of the best known on the Mississippi was the Eagle Boat Store on the St. Louis waterfront. The chandlery dated back to 1837, operated by Ward & Brady until succeeded by the Leyhe family beginning in 1895.

It is the opinion of this writer that the most vivid description ever written, which conveys the essence of the boat store, appeared in a booklet entitled A History of the Eagle Packet Company, published in 1951 by my friend Capt. Roy L. Barkhau (1904–1976) who served as circulation manager for The Waterways Journal and after retirement was purser aboard the Str. Belle of Louisville.

“On a bright sunny day, let your steps direct you toward the Father of Waters. As you go down Delmar Boulevard, just before you come to the levee, you will see a sign reading ‘Eagle Boat Store’ with an arrow pointing up an alley. If you follow this arrow you will shortly come up alongside the back door of the boat store, which opens onto Commercial Street. Stepping into the dark, cool, cavernous interior of this ship chandlery, you will find yourself in a most fascinating place. You will be surrounded by gigantic coils of rope, great iron and steel chains and enormous steamboat ratchets suggestive of colossal strength. Your nose will be delighted with the pungent smell of oakum as your eyes seek out the light in the long, far distance. In the next room you will be confronted by a long counter under which, and behind which, is every known piece of marine hardware. And, as you step into the third room, which is an office, you will suddenly come into the light, for this room is solid glass in front, letting the reflection of the sun on the broad Mississippi, immediately below, play into the corners of this room. Here it is that you will find that grand old man who might be Father Mississippi himself; Capt. William H. ‘Buck’ Leyhe. He will be seated at a rolltop desk, as befitting a steamboat captain of the old school. On the walls of his office is a most interesting collection of photographs of steamboats; great sidewheelers, little sternwheelers and of his father, uncle and brother, Capt. Henry Leyhe, who passed away in 1948. Capt. Buck’s eyes will twinkle as he tells you of some amusing incident on the river of the long, long ago.”

After residing at 517 Wharf Street for decades, the boat store relocated to 805 North Wharf Street, between the Eads and Veterans Bridges.

In 1958, the retired snagboat Charles H. West was purchased from the U.S. Army Corps of Engineers and brought to St. Louis. Moored at the Foot of Carr Street, the sternwheeler became the new home of the river supply business, managed by Fred H. Leyhe, son of Capt. Buck, who had assisted with the operation of the boat store until shortly before his passing on July 4, 1956. The facility began offering midstream service as well as complimentary quarters, coffee and pleasant pastimes for crew members waiting for their boats.

The business ultimately evolved into Eagle Marine Industries. The former store building later became a bar and entertainment venue called “The Old St. Louis Levee House” until it was razed following a fire in early 1972. Various artifacts, including a cash register, stand up clerk’s desk, Regulator clock, Capt. Buck’s mahogany desk and a portion of the counter survive in river museums and private collections.