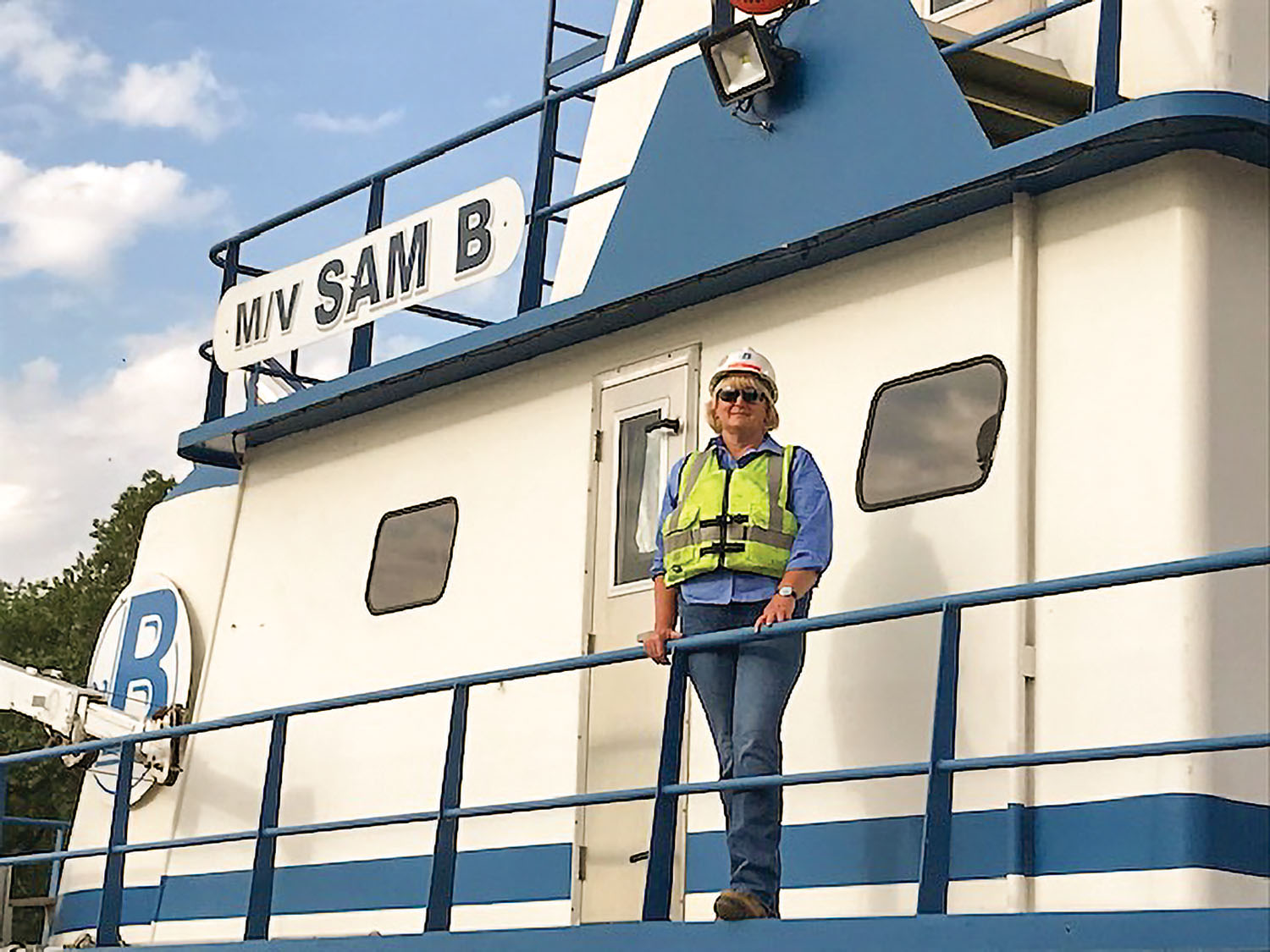 Her first time to set foot on a towboat, which was working at a bridge construction site at the time, was marked by a gruffly spoken warning from the pilot: “Hey, zip and clip,” referring to the life vest she had loosely pulled on before boarding. “And, don’t forget your hard hat.”

This was Mindy Brundick’s introduction to what has become her everyday world as the manager of the marine “business unit” of Budrovich Contracting Company, located in St. Louis, Mo. (The company refers to its divisions as business units.) Before that, her exposure to the river industry was limited to growing up on a farm in the Missouri River bottoms of Labadie, Mo., where she spent several decades. Educated in St. Louis, she went on to build a successful career designing travel incentive programs for companies in the automotive industry, spending considerable time in Detroit, until her career path took a turn.

‘’Life threw me a curve,” Brundick said. “My late husband battled cancer for over three years, during which time I stepped into the role of full-time caregiver.” After he passed, she slowly began researching career options for the next chapter of her life. One of her options was to go to work for a 75-year-old construction contractor named Budrovich. The company was in the market for someone to manage a new marine venture it had formed in 2013 when it bought a small river operation in St. Louis. Doing her due diligence for the job, Brundick visited a Budrovich work site in a john boat and, while there, went aboard a towboat. Impressed, she said, “I never forgot that encounter. At the time, I had no idea the pilot, Randy Wunderlich, and I would be working together. His safety consciousness stuck with me.”

Brundick hired on as Budrovich’s marine business unit leader in 2014. The unit is an integral part of the Budrovich family of construction-related companies, which also offers cranes; mechanics with full-service trucks for shop and field repairs; excavation and grading; mechanical insulation; rebar services; and various land development activities including utility services and structural steel. “I learned quickly that the river and those who work on it are unique in many ways,” Brundick said. “The rivers are rarely kind, so one must have a true desire to work in this environment and have a keen appreciation of the waterways and Mother Nature.”

In addition to a full crew of union operators and assets from the other Budrovich business units, the marine sector consists of a fleet of towboats from 600 hp. to 1,200 hp., cranes, material handlers, barge-mounted excavators and dredging equipment.

Developing a culture of safety at the marine business unit has been a key goal for the Budrovich management. “During my time here, I have seen a dramatic improvement in safety,” she said. Instead of having to remind one another to be safe, it is now assumed that hazards should be identified and called out immediately. Putting our health and safety first is at the top of our agenda.”Commenting on the company’s diverse offering of services, Brundick said, “We are able to cross-utilize resources throughout our business units. In addition, we have a dedicated trucking fleet to haul locally and regionally, and we have expanded our mechanical support resources to include in-shop and field repairs, third party inspections and other services. As customer demand for turnkey service continues to climb, I work more closely with my customers to understand their goals and challenges and then develop a plan to use our resources to meet their needs.”

Continuing, Brundick said, “I believe the quality, skill and commitment of our employees is what is most important to our company and our customers. After the completion of jobs, I will often receive a call from the customer to say how great the Budrovich crew was to work with and to thank us for a job well done. People are what sets a company apart from its competitors. I respect and appreciate the effort that our employees put forth in the field, and I make it a point to be on job sites periodically to observe and have a frontline view of their challenges.

“Beyond providing resources of equipment and manpower to our customers, our goal is to understand the customer’s needs and provide an action plan to help fulfill those needs. We do not want to show up with our arms crossed and ask, ‘What do you want us to do?’ We want to identify the customer’s concerns and figure out the best and safest way to fix the issues,” Brundick said.

Asked if he could think of one word that best describes Brundick, Executive Vice President Erik Struckoff, who directs all Budrovich’s operations, said “ruthless.”

“I guess I could have used the word ‘passionate,’” he said, “but that doesn’t really do her justice. She really goes after it.”

Caption for photo: Mindy Brundick aboard the mv. Sam B. (Photo courtesy of Budrovich Marine)