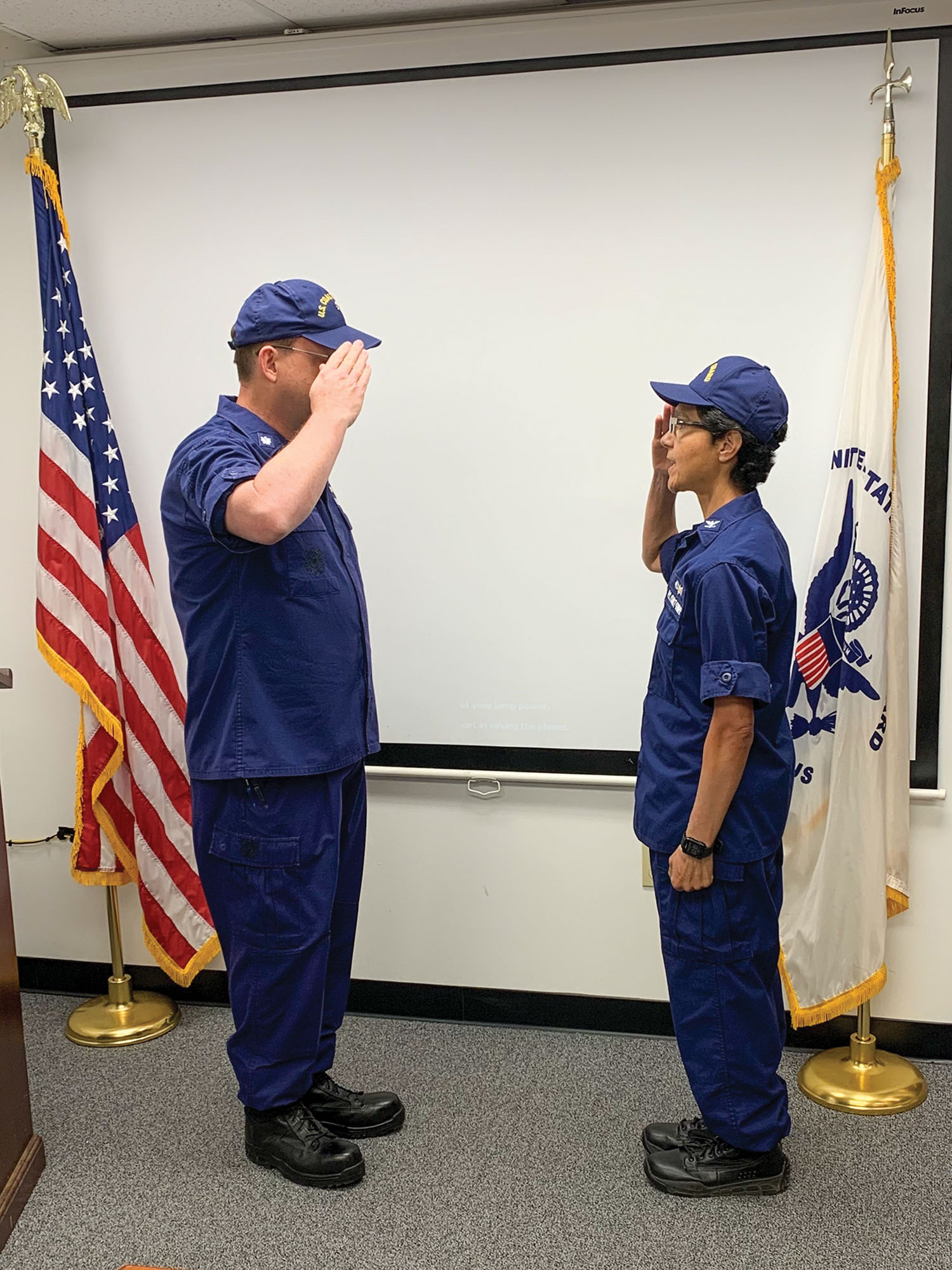 In his opening comments, Nadeau spoke on the huge role the inland waterways of the United States play in the nation’s economy and culture, calling it a gift.“That gift consists of the 25,000 miles of inland waterway, the 95,000 miles of coastline, 360 ports that are scattered across our nation, the 50,000 aids to navigation that help mark those waterways that connect those ports,” Nadeau said. “Together that system, that whole network, facilitates the movement of thousands of vessels safely every second of every day. In doing so, that stimulates and sustains $5.4 trillion of economic activity in the United States and supports 23 million U.S. jobs.”

“The women and men of Sector Lower Mississippi River and its outlying units have done an amazing job protecting and preserving this gift to the nation,” he said.

Nadeau particularly recognized the sector and Tamez’s leadership during the historic high water season of 2019, the longest in the region’s history.

“You have distinguished yourselves through your professionalism and dedication to the mission,” Nadeau said. “These accomplishments are fueled by the leadership, which starts at the top.”

Nadeau then presented Tamez with a meritorious service medal for her three-year command and for her leadership during the 2019 flood in particular.

“You kept your crew safe, well-trained and prepared, and you demonstrated through humility and service to others that you understand what a privilege it is to serve as sector commander, to be a commanding officer in the nation’s greatest military service,” he said.

Then, speaking to “soon-to-be-captain” Rhodes, Nad-eau conveyed his full confidence and high expectations.

“Know that my trust in you is implicit,” Nadeau said. “You are the sector commander. You are the CO. Be decisive and act with confidence.”

Rhodes comes to the Memphis-based sector from Coast Guard Headquarters, where he had served in the office of shore forces since July 2018. Prior to that, Rhodes served as deputy sector commander for Sector Upper Mississippi River. Previous posts include project officer for counternarcotics and law enforcement at U.S. Africa Command in Stuttgart, Germany, command center chief for Sector Charleston, surface action officer and tactical action officer for Joint Interagency Task Force South in Key West, Fla., logistics officer for port security unit 307 in St. Petersburg Fla., and various other roles in Group Key West. Rhodes began his military career in 1996 in the Army. He accepted a direct commission into the Coast Guard in 2000.

Rhodes, in turn, said he was excited to call Memphis home again.

“It was 40 years ago when I lived here before, when my dad was in the Navy, that I had my first exposure to the Coast Guard,” he said. “A neighbor across the street was a Coastie.”

Rhodes then thanked everyone he has served with over his 24-year military career.

“Thank you all for the experiences we’ve shared, good, bad and indifferent,” he said. “It made me who I am standing before you today.”

Speaking to her entire Sector Lower Mississippi River team, Tamez offered her thanks and admiration.

“Thanks to each of you for your dedication to service and for supporting me during my tour,”

Tamez said. “I know you will do the same for Commander Rhodes.”

Tamez’s next assignment is with the Coast Guard’s 14th District in Honolulu, where she will serve in the planning and force readiness division.