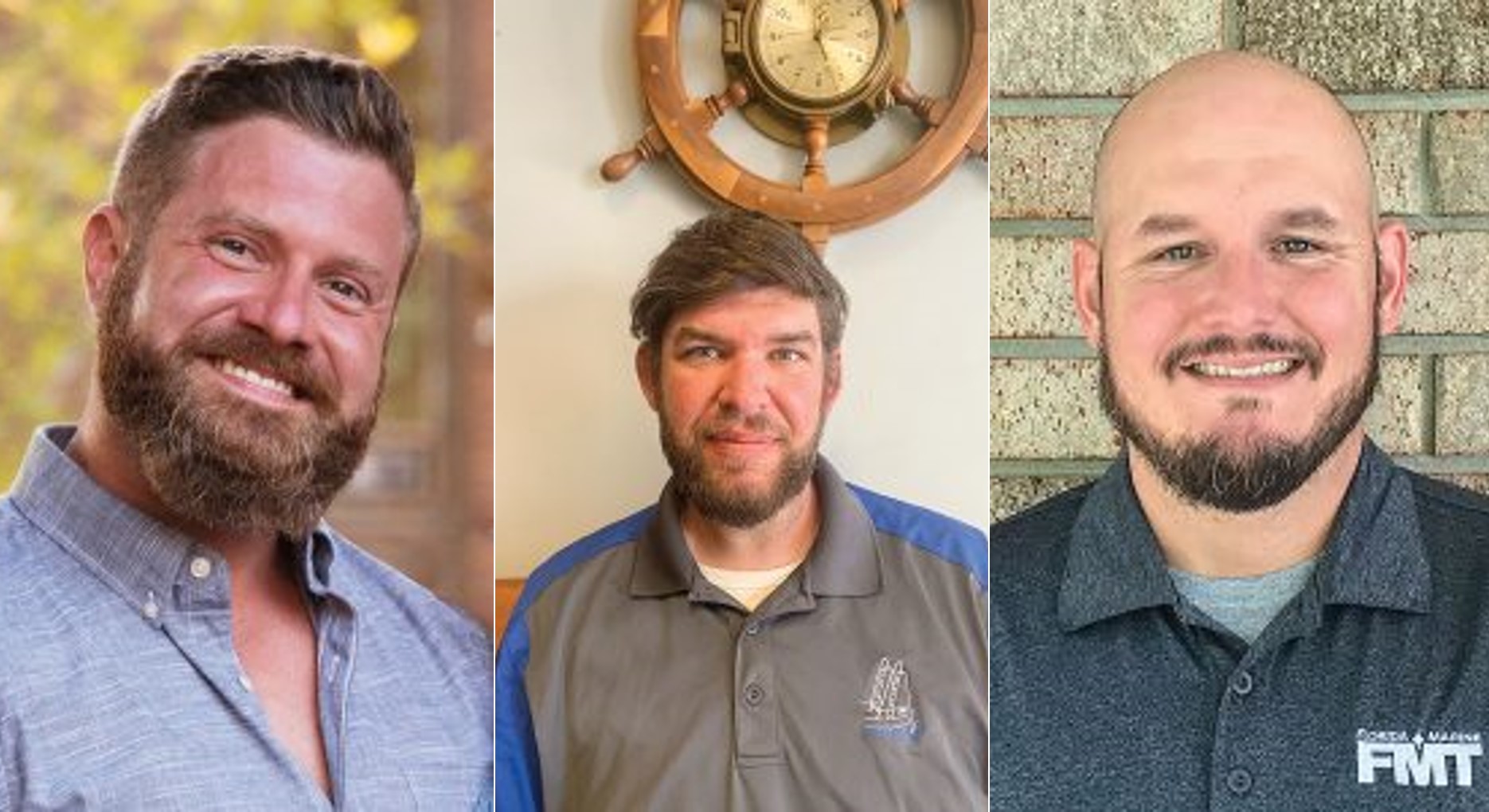 40 Under 40 Awards: Davis, Deloach And Duffy

For the third year, 40 of the industry’s future leaders will be honored at the Inland Marine Expo with the “40 Under 40” award, which recognizes individuals for their outstanding contributions to the inland marine transportation industry in a variety of fields. All 40 honorees were nominated by executives and peers for their hard work and dedication to the industry.
Over the course of 14 weeks, The Waterways Journal is featuring all 40 recipients. This week we recognize Tyler Davis, Trenton Deloach and Brian Duffy.

Tyler Davis, 33, is director of operations and sales for Big River Propeller of LaCenter, Ky.
Davis grew up around propeller repair, going to work with his father to watch the process as well as to help out. As a young man, his dream was to own and operate a propeller shop.

That dream came true when David and his father started Big River Propeller on January 1, 2014.

Davis has helped build Big River Propeller into a very accomplished repair business for the marine industry, said Ron Culp, port engineer for American Commercial Barge Line in Paducah, Ky. It serves both companies on the inland waterways as well as blue-water companies.

“Tyler is very ambitious and intelligent, and he works hard to continue building clientele, offering exceptional support to companies and their staff,” Culp said. “Through his hard work in the river industry, Tyler is changing the way propeller repairs are viewed.”

Culp noted that the efficiency and close tolerances for propellers have saved companies thousands of gallons of fuel, along with valuable time.
“Many of the leading barge companies have leaned to Big River Propeller Company for service work due to the results of wheel work and performance of their vessels,” Culp said.

Culp also called Davis a team leader who continues to share his knowledge with coworkers to make sure they continue to satisfy all customer needs.

“Tyler has been on the forefront of setting the standard for the industry,” Culp said. “His commitment to customer service and quality will continue to be the driving factor of Big River Propellers’ future success.

In addition to running the operation of a second-generation towing company, Deloach is also a licensed master of towing vessels.

He got his start in the family business early, occasionally going to work on towboats in high school. After earning an engineering degree from Louisiana Tech University, he went to work full-time for the company, first on vessels and later shoreside.

Deloach’s father, Zeland David “Z. Dave” Deloach, president of Deloach Marine Services, said his son’s focus on attending to the company’s day-to-day needs allows him to spend more time considering long-term goals and policies as well as attending to customer relations and participation in industry groups. It is also a good position to prepare him for the future, he said.

“He understands the seriousness of the business, the people involved, and is not afraid to tell them how it is,” he said. “He also works very closely with our shipyard, A&Z Marine, to make sure our own vessels are being properly repaired, and we do competent work for our outside customers.”

The elder Deloach added he believes Trenton Deloach is doing a great job and, concerning the way he conducts himself, added, “any father would be proud.”

Duffy began his career on the river at the age of 18 in 2003 as a deckhand for Florida Marine. He rose through the on-board ranks, becoming a tankerman, steersman and, in 2015, a captain.

He remained on board various Florida Marine vessels until 2017, when he was promoted to port captain and moved into an office role in part because of his dedication and knowledge, said Laura Martin, sales manager for Tow Works LLC, in Lake Jackson, Texas.

“Brian personifies the mantra that the marine industry, once in your blood, becomes a way of life,” Martin said.