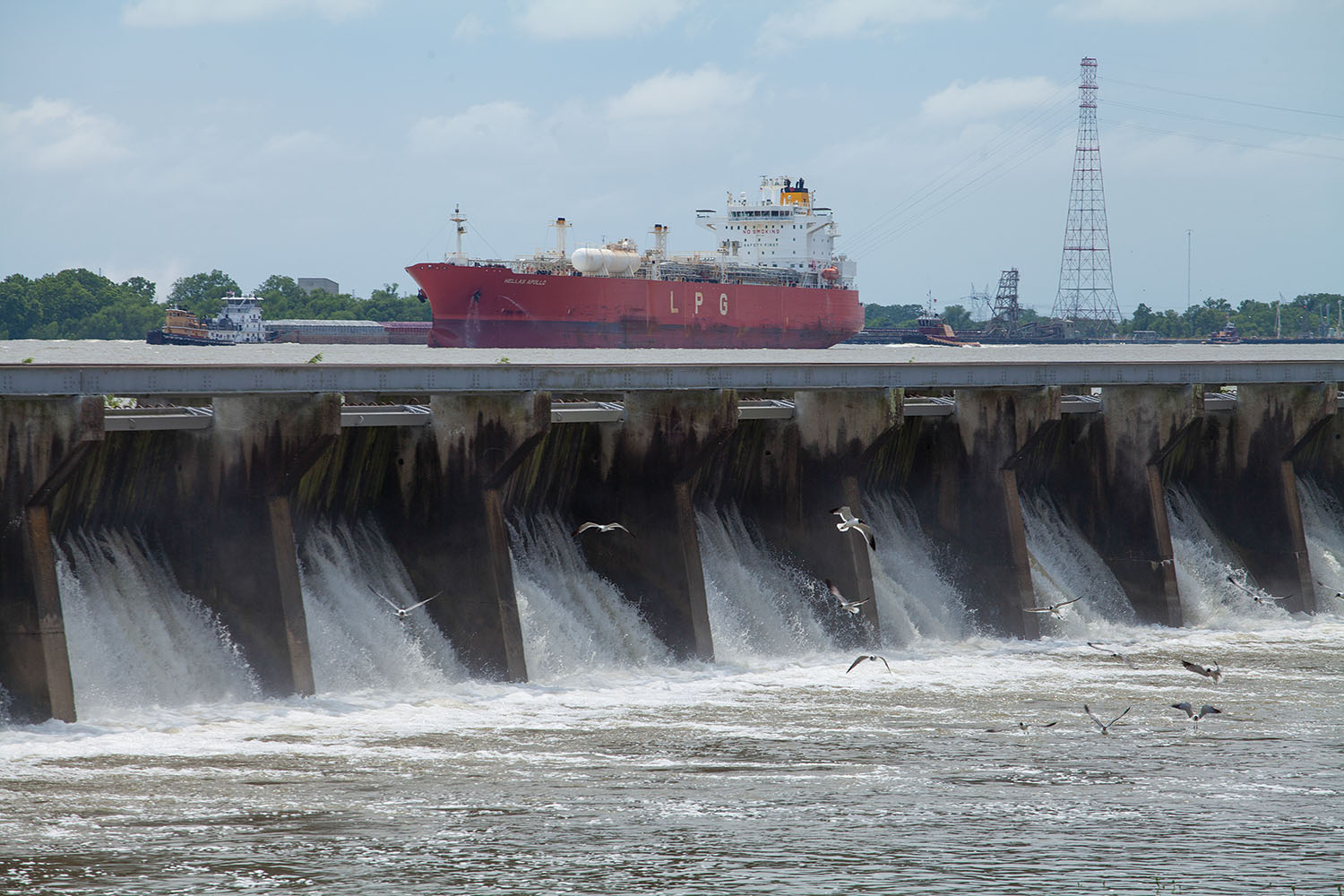 The Bonnet Carré Spillway, the southernmost flood control structure on the Mississippi River, is designed to divert up to 250,000 cubic feet per second (cfs.) of river water northward to Lake Pontchartrain, a brackish lake in southeast Louisiana. From there, river water eventually empties into the Mississippi Sound and the Gulf of Mexico. The spillway, located about 30 miles upriver from New Orleans, is designed to keep the river at the city’s Carrollton Gage from exceeding 1.25 million cfs., which typically corresponds to a river stage of 17 feet.

The spillway is composed of 350 bays that stretch across a historic crevasse on the river’s east bank. Each bay is made up of 20 wooden timbers that, when removed by rail-mounted cranes, allow the river to spill into the lake. Construction began on Bonnet Carré in 1929. The spillway was completed in 1931 and first operated in 1937.

The Bonnet Carré Spillway (BCS) is one of five floodways spread across the Mississippi River & Tributaries Project, the massive effort to reduce the risk of flooding within the Mississippi River Valley. The project was authorized by the Flood Control Act of 1928, legislation that Congress passed in response to the Great Flood of 1927.

The lengthy 2019 opening led to the decimation of commercial fishing based in Lake Pontchartrain and the Mississippi Sound and beach closures along the central Gulf Coast due to algae blooms. It also has inspired a pair of lawsuits brought by various Mississippi cities and business groups, along with the Mississippi secretary of state, that challenge the way the U.S. Army Corps of Engineers and the Mississippi River Commission operate the spillway. Those lawsuits were filed in late 2019.

In June, a judge allowed Louisiana to join those lawsuits as a defendant, though the state is not seeking a complete dismissal of the lawsuits. Rather, the motion from the state, while supporting the use of the spillway “to protect lives and property, it also recognizes that the Corps could take steps to manage water resources differently during high-water events,” according to court documents obtained by the Associated Press.

Now joining the debate over the Corps’ management of the Bonnet Carré Spillway is a recent study by the Tulane University Department of River-Coastal and Science Engineering that suggests the construction of upriver diversions could lower flows at the spillway. Ehab Meselhe and Chia-Yu Wu coauthored the study, titled “Utilizing Upper Diversions in River Water Management Case Study: 2019 Mississippi Floods, Phase 1.”

From the start, the study acknowledges the flood-protection benefits of the spillway and the wider Mississippi River & Tributaries Project.

“The 2011 flood event is a prime example of the substantial safety and economic benefits from the existence of the BCS and the overall Mississippi River flood protection system,” the study states.

But the frequent operation of the Bonnet Carré Spillway has had acute impacts on the environment, Meselhe said.

“In 2018, 2019 and 2020, it was the first time ever that the spillway was opened in three consecutive years,” Meselhe said in a Tulane University report. “And in 2019 it was also the first time ever for the spillway to be opened twice in the same calendar year. And every time it operates, especially if it operates in the summer or late spring, when temperatures are high, there is an impact on water quality.”

Tulane partnered with Restore the Mississippi River Delta, a consortium of nonprofit organizations, to explore alternatives to the current flood management plan on the Lower Mississippi River involving Bonnet Carré. Specifically, the study looked at three diversion projects in the vicinity of Bonnet Carré already included in Louisiana’s Coastal Master Plan: Ama Diversion, Union Diversion and the River Reintroduction in Lake Maurepas project. The Ama Diversion is designed to divert sediment and freshwater into the upper Barataria Basin on the west bank of the river at a cost of $882 million. The Union Diversion would divert freshwater into the Maurepas Swamp north of the river’s east bank at a cost of $876 million. Similarly, the River Reintroduction into Maurepas Swamp project would divert sediment and freshwater into the swamp, which can be seen from both Interstate 10 and Interstate 55 between New Orleans and Baton Rouge. Based on high-water seasons in 2018 and 2019, the study determined the Ama and Union diversions, designed with a maximum discharge of 50,000 cfs. and 25,000 cfs., respectively, would have reduced both the duration and discharge volume of the openings at Bonnet Carré.

“The analysis shows that for the 2018 and 2019 combined flood events, when the Ama North … and Union diversions are operated jointly, the reduction in the flow volume released through the BCS ranged from 57 percent to 61 percent depending on the plan used for the Union Diversion, while also reducing the duration needed to operate the spillway from 143 days to 96 days,” the study said. “The second phase of the study will focus on the basin-side.”

According to the report from Tulane, if operating the diversions in tandem with the Bonnet Carré Spillway as flood control outlets would have a positive impact on the surrounding basins, that information could eventually be presented to Congress, the body that could make changes to the Corps’ flood management plan.

“We completely understand the way the Corps of Engineers operates Bonnet Carré, and this study is not meant in any way at all to criticize the Corps,” Meselhe said. “We are simply saying, ‘why not combine flood control objectives with ecosystem restoration opportunities—a win-win?’”

Caption for photo: A tanker on the Mississippi River passes the Bonnet Carré Spillway in May 2019, during one of the spillways two high-water openings that year. (Photo by Frank McCormack)