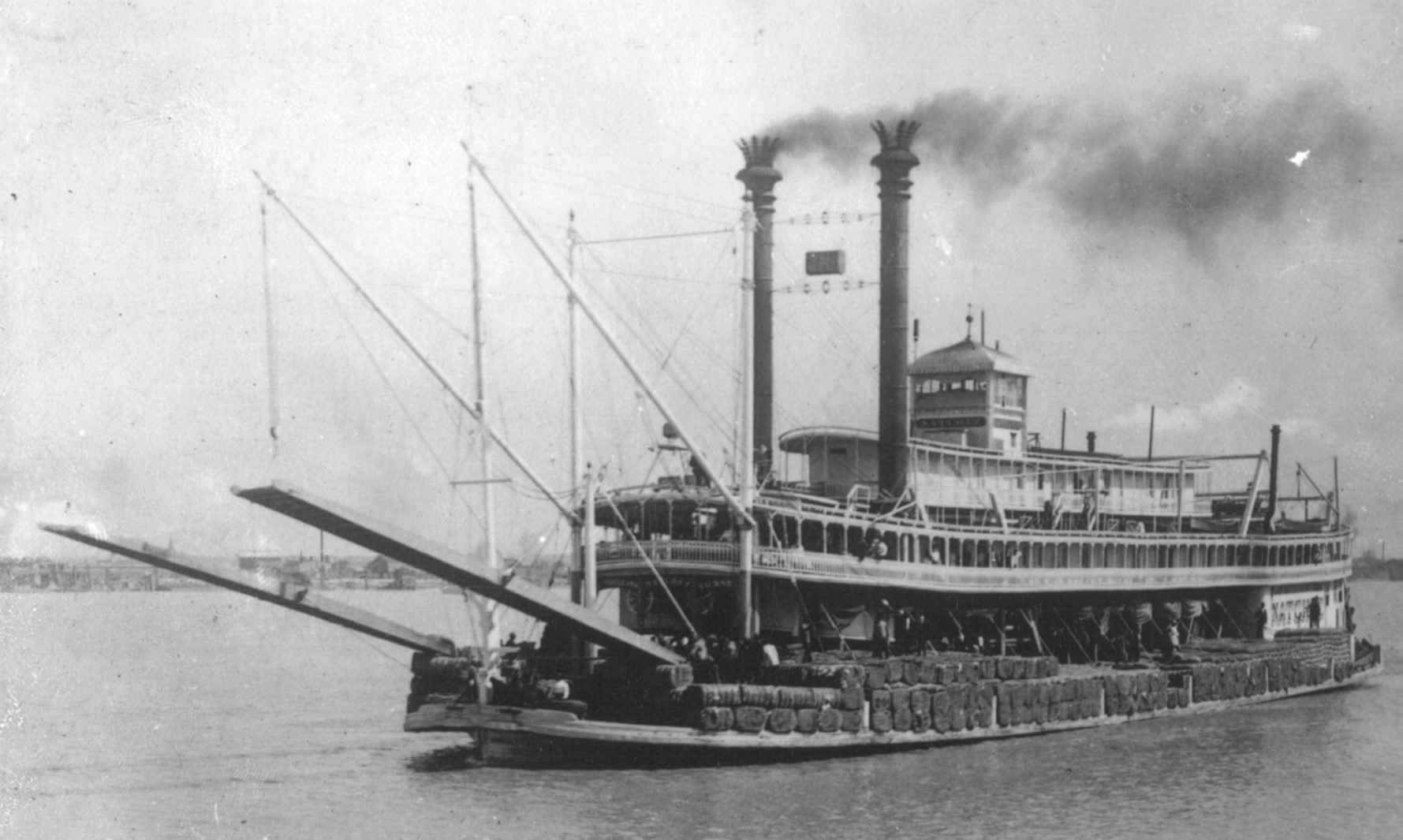 The Steamer Natchez No. 8

If you reside in New Orleans or have occasion to visit the fabled Crescent City, allow yourself ample time to follow the call of the calliope and take a leisurely walk to the Toulouse Street Wharf, where you will find the beautiful sternwheel steamboat Natchez, built in 1975 and designed by the late Capt. Alan Bates, the previous writer of this column.

The Natchez is the ninth steamboat to bear the name; all of its predecessors were sidewheelers except one, which we will feature this week along with a recently discovered image made from a glass plate negative.

An elegant sternwheeler with graceful lines built by the renowned Howard Shipyard on the Ohio River at Jeffersonville, Ind., the eighth Natchez was launched in 1891 at a cost of $43,000. With a wooden hull measuring 225 feet in length by 40 feet in width, the new vessel was powered by engines having 20-inch cylinders with an 8-foot stroke. Steam was supplied by three boilers.

Inasmuch as Capt. Thomas P. Leathers, the colorful captain and owner of the previous steamboats named Natchez (including the sixth one, which raced the Robt. E. Lee 150 years ago from New Orleans to St. Louis in 1870), was well up in years, the command of the new steamboat went to his son, Capt. Bowling S. Leathers. The young captain’s wife, Blanche Douglass Leathers, was the daughter of a wealthy Tensas Parish (La.) planter who regularly shipped his cotton on Leathers’ boats. Marrying in 1880, Blanche moved aboard the Natchez (No. 7) with her husband and learned the river under his tutelage, receiving her license in August 1894.

Blanche was known for being a no-nonsense manager who ran a tight ship and proudly perpetuated the family tradition of steamboating. When her famous father-in-law passed away on January 13, 1897, as the result of being struck some months earlier by a bicycle while crossing St. Charles Avenue in New Orleans, advertisements appeared in newspapers listing Capt. Blanche as master and Bowling as clerk of their riverboat. It is reputed that Capt. T.P. Leathers, nicknamed “Old Push” in honor of the Pushmataha Indian tribe, never set foot aboard the eighth Natchez, the last steamboat in the Leathers’ fleet.

In November 1896, the big sternwheeler sank just above its namesake city of Natchez, Miss., with 1,700 bales of cotton and 8,757 sacks of seed aboard, the cause attributed to dried hull seams. Quickly raised and repaired, the boat was soon involved in another incident when, in early February 1897, it hit the bank at Cottonwood, some 20 miles below Vicksburg, knocking down the jackstaff and twin stages, as well as causing the towering smokestacks to topple. The steamer again sank—this time at Ford’s Crossing, 12 miles below Natchez—in November 1899, but was raised and placed back into service.

By 1902, Blanche and Bowling Leathers had retired from the river. Capt. William A. Duke had become master of the boat, with T.C. Sachse serving as clerk. The vessel received new boilers in July 1914, but less than a year later was sold, in May 1915, at auction by a U.S. Marshall for $6,500 to Capt. Duke. The boat was operated in the New Orleans–Cariola–Grand Lake trade with minimal success, often being laid up for long periods, before ultimately being dismantled in 1918.

Capt. Blanche Leathers, who had once been described by newspaper reporters as “The Angel of the Mississippi,” died on January 25, 1940.
Further information regarding the current steamboat Natchez (No. 9) is available at www.steamboatnatchez.com.
Editor’s note: For questions or suggestions regarding the Old Boat Column, Keith Norrington may be contacted by e-mail at curatorkeith@yahoo.com.