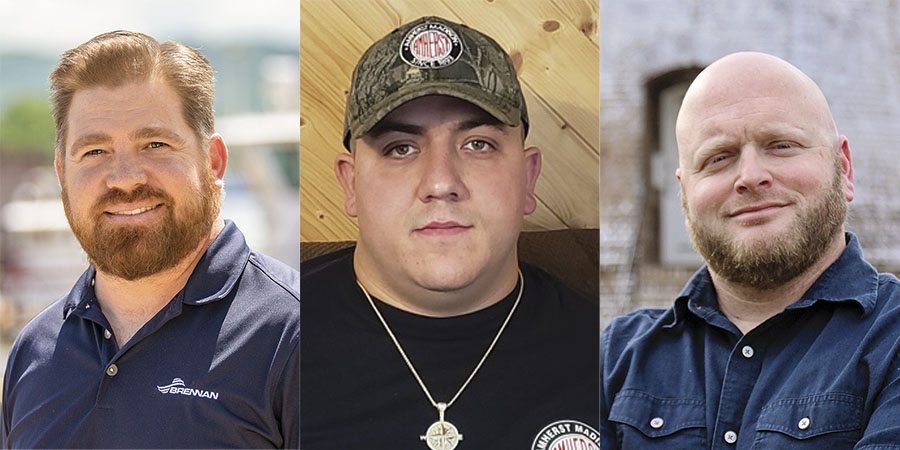 40 Under 40 Awards: Palen, Pettrey And Powell

Over the course of 14 weeks, The Waterways Journal is featuring all 40 recipients. This week we recognize Dan Palen, Anthony Pettrey and Joseph Powell.

Palen began his career on the river as a deckhand after high school and, in short order, worked his way up to mate. In 2004, he transferred to Brennan Marine and worked in dispatch, managing day-to-day operations in multiple harbors and assisting with J.F. Brennan mobilizations. He then moved to a marine safety position, supporting maritime safety at job sites throughout the country, before being promoted to director of marine safety and compliance in 2018 for both J.F. Brennan Company and Brennan Marine.

“Dan helped create our internal safety and compliance software and has done a tremendous job in managing the transition into Sub M compliance as well as ISO 9001:2015,” said Adam Binsfield, president of Brennan Marine Inc.

Anthony Pettry, 31, is first mate on the mv. Charleston for Amherst Madison in Charleston, W.Va.

Alan Hall, vice president of operations for Amherst Madison, called Pettry a top-flight mate with an amazing work ethic who is committed to excellence. “He trains green deck crews in the right way and is an essential part of the Amherst team,” Hall said.

Hall also complimented Pettry’s ability as a line handler, noting that he participates in line-throwing competitions, where he excels.

Pettry also gives back to his community outside of work. He especially enjoys buying bicycles for underprivileged children at Christmas. Last year, Hall said, Pettry bought 50 of them.

“It’s an honor to have Anthony on our team,” Hall said.

Powell has been a member of the law enforcement community for more than 20 years, beginning his career in the U.S. Coast Guard, where he served four years along Mississippi’s Gulf Coast, enforcing federal regulations. From there, he was accepted to join the U.S. Secret Service and assigned to the dignitary protection detail. He provided protection for the United Nations General Assembly’s ambassadors to the United States. Powell was assigned to the presidential protection detail during the 2004 campaign for president of the United States. During that time, he acted as a liaison between state and local partners. Additionally, he was responsible for the development of risk assessments to better evaluate weak points in security for multiple foreign missions and a liaison between state and local police while assigned to the Joint Terrorism Task Force.

In mid-2007, Powell felt a need to return to Mississippi and use the skills he had obtained in the Coast Guard and Secret Service to better enhance critical infrastructure in the Southeast United States. He joined Maritime Defense Strategy LLC, and since then has conducted more than 1,000 safety/security audits in reference to the Maritime Transportation Act of 2002 and the Oil Pollution Act of 1990. He has also investigated safety and security violations and prepared after-action reports specifying preventative action to be taken and provided TWIC training and assistance for more than 300 MTSA-regulated facilities.

“Over the last 10 years, Joseph has brought maritime defense to the next level,” said Mark Perry, CEO of Maritime Defense Strategy LLC. “Joseph was responsible for the development and submission of all of our training programs to the U.S Coast Guard for approval, all of which were approved within six months of the initial submission. Furthermore, Joseph has sat on the congressional review board that was responsible for the review of the TWIC programPerry said Powell has now written more than 300 facility security plans for major companies and that he is currently a part of 10 area maritime security committees, the Strategic Port Committee and the U.S. Coast Guard Foundation steering committee for the U.S. Coast Guard Museum.

Within the past two years he has also been certified in marine defense as a U.S. government contractor as well as certifications under three GSA schedules and with the World Bank. “Joseph has achieved not only this but at the same time, he has raised five beautiful children to include two foster children,” Perry said.