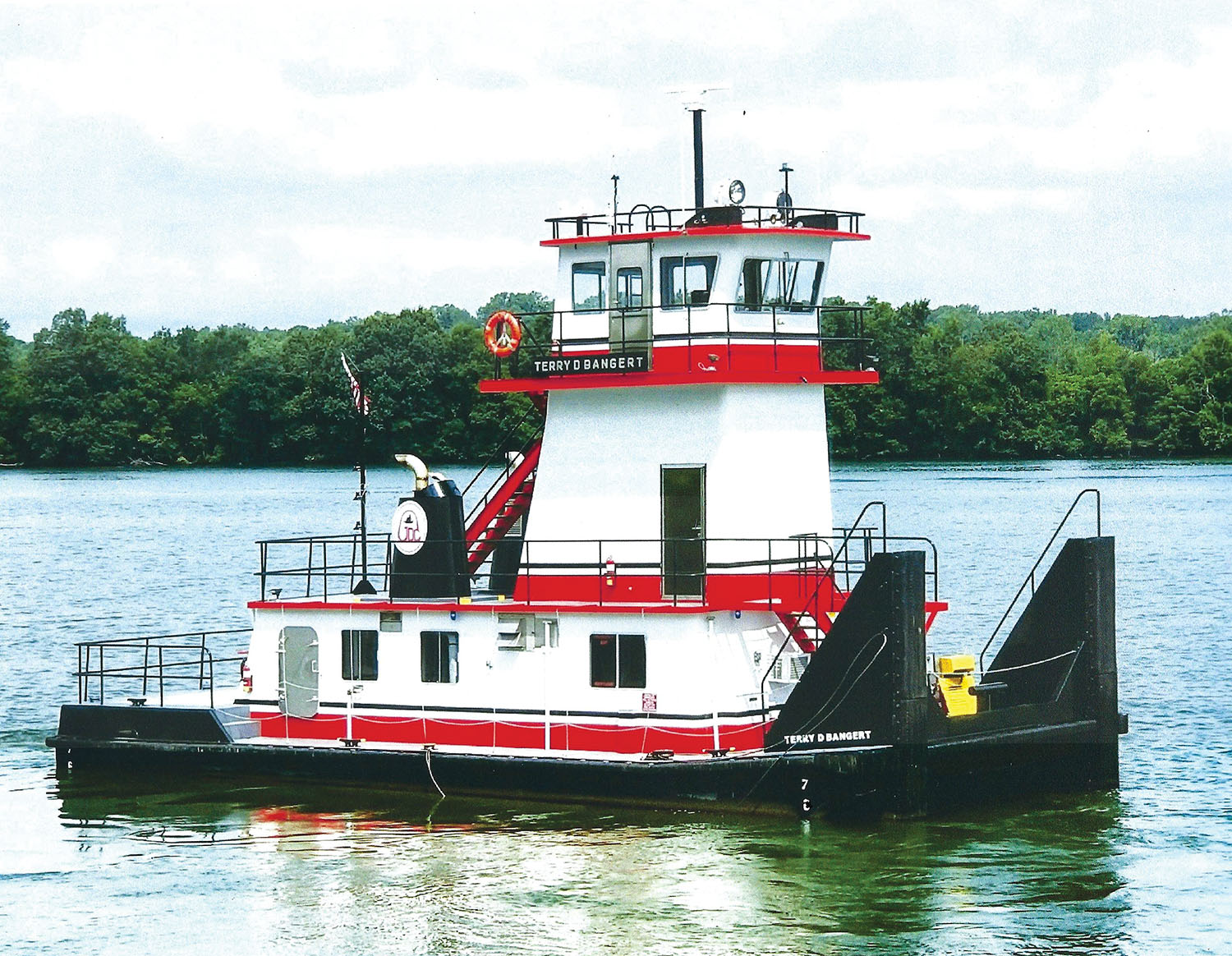 Gateway Dredging & Contracting LLC, Old Monroe, Mo., has put a new towboat into service. It is named the mv. Terry D. Bangert. Built by Serodino Inc. at its shipyard at Mile 340 on the Tennessee River, the new vessel is a 1,500 hp. Super Tiger Class towboat that is Subchapter M-certified.

The boat, constructed of ½-inch plate throughout, has a 60- by 24- by 8-foot hull with a 5-foot, 9-inch draft. Transverse framing is 5- by 3-inches by 3/8-inch on 24-inch centers. The inside motor mounts are continued fore and aft as solid sheets to divide the hull into three collision compartments, three fuel tanks (9,500 gallons), engineroom, three water tanks, and six stern compartments. All void tanks have high-level alarms with bilge piping. Schuyler tow knees and perimeter fenders protect the hull.

Fernstrum zero knot coolers are built into the hull.

The superstructure is constructed of 3/16-inch plate with 2-1/2-inch by 2-inch angle framing. Watertight doors on the main deck were furnished by Dale’s Welding with upper deck aluminum doors by Omega Products. All quarters are insulated, paneled, heated and air conditioned and have poured rubber floors.

The first deck contains a galley, a modest head with shower and a U.S. Coast Guard-approved marine toilet with an H20 sanitation system. The second deck is used as a storage area. The pilothouse, with a 28-foot eye level, controls all aspects of the vessel’s operations with Skipper follow-up lever controls and toggle back-ups that separately operate the four flanking and two main rudders. The Twin Disc throttle controls, two radios, a radar, AIS, multiple alarm systems and interior cameras complete the control and information center.

If Bangert, who is chief operating officer of Gateway Dredging, had to paint the new boat, he would not be ill-suited for the job. He started his career on the river while he was in high school, at the age of 14, chipping and painting boats and barges for his family’s dredging business (at the rate of $2.00 an hour, he added).

That company was named Limited Leasing Company. It was founded by the Bangert and Viehmann families in 1970 and operated as such until 2011, which was when it merged with another dredging firm, Jotori Dredging Inc., to create Gateway Dredging.

Terry Bangert began full time with Limited Leasing in 1989, working as a deckhand, leverman on a dredge and pilot. “I was more or less a jack-of-all-trades, doing whatever had to be done,” he said. He transitioned through the following years to managerial roles as foreman and superintendent, and in 2010 was named chief operating officer of Gateway.

Caption for photo: The 1,500 hp. mv. Terry D. Bangert is the seventh towboat in the fleet of Gateway Dredging & Contracting LLC. (Photo courtesy of Serodino Inc.)