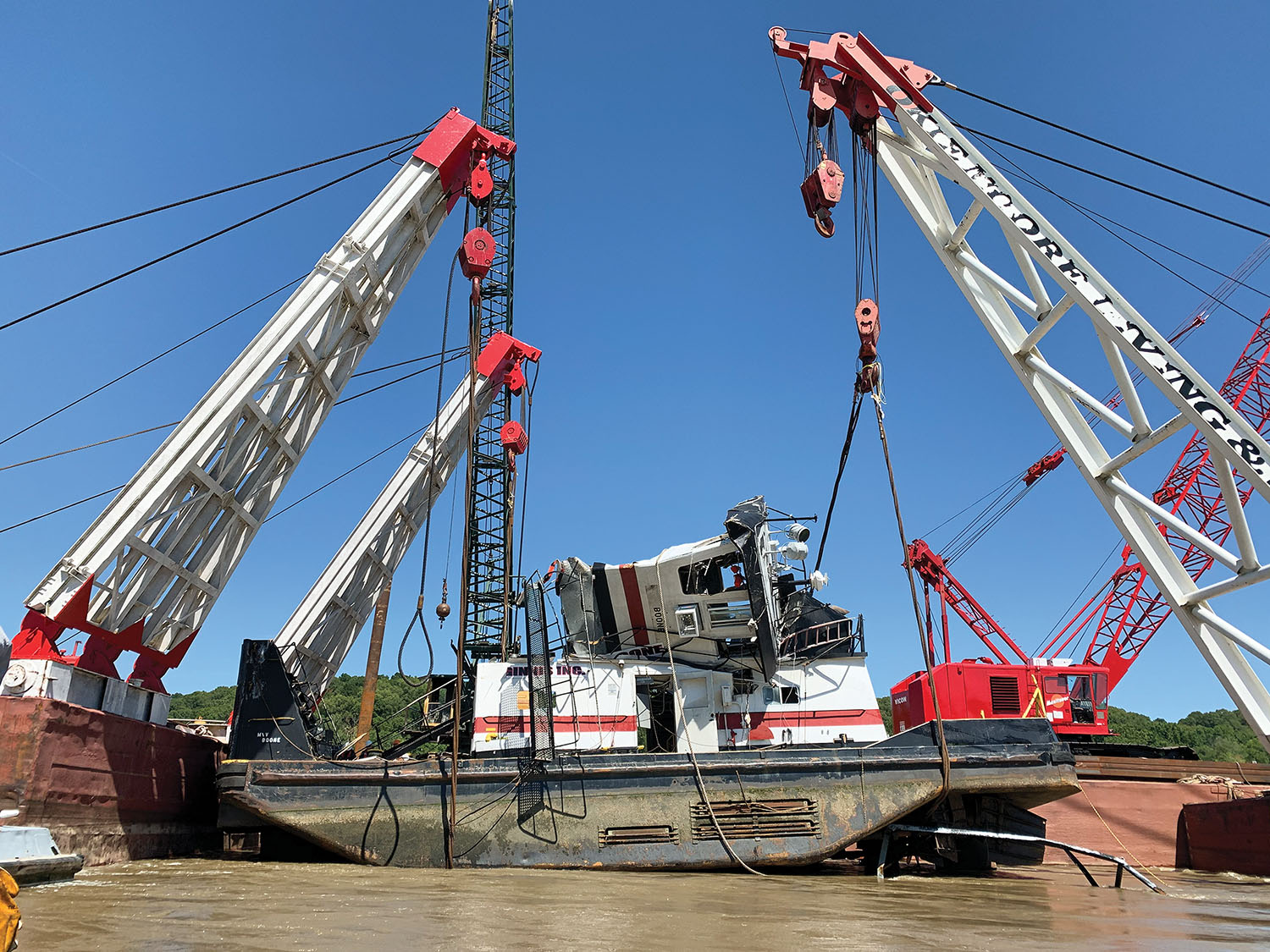 An Okie Moore Diving & Marine Salvage crew removed the mv. Boone August 16 from where it had sunk at Upper Mississippi River Mile 43, near Thebes, Ill.

The river reopened at 3:06 p.m. after the Boone was removed from the channel, said Lt. Commander Christopher Weiser, executive officer for the U.S. Coast Guard Marine Safety Unit in Paducah, Ky. The Coast Guard continued to investigate the sinking.

Bernie Heroff, chairman of the River Industry Action Committee, said the Coast Guard had maintained a limited queue and did not list every vessel waiting to transit the river segment during the 4-1/2-day closure, but estimated at least 40 southbound and 20 northbound tows had to wait for the vessel to be salvaged.

The Boone was being towed upriver by the mv. David A. Lewis Jr., owed by American Commercial Barge Line, as a dead tow when it sank at 4:40 a.m. August 12 in about 30 feet of water. It had recently been purchased by Legacy Corporation of Moline, Ill. The Coast Guard reported the captain of the David A. Lewis Jr. said he heard a noise outside the wheelhouse, looked out, and the lines connecting the vessels snapped.

“They knew what to do and how to do it to get that boat up as quickly and safely as possible,” Leavell said.

The Okie Moore crew originally determined using sonar that the vessel was upright on the bottom of the channel. “The current was so swift that by the time we got there (with a salvage rig) it had rolled on its side,” Leavell said.

A passing tow had also apparently hit the wheelhouse of the Boone, causing structural damage.

The Okie Moore crew was able to get a wire under the stern of the Boone first, positioned it so that it was straight with the current and then, August 16, was able to get another wire under the bow, Leavell said. That allowed the crew to upright the Boone before lifting it using the slings and moving it out of the channel and into shallower water. The crew then focused its work on sand removal to see if the Boone would float on its own or whether it would need to be placed on a deck barge or transported in the slings for further removal.

Weiser said the southbound queue had been cleared as of the morning of August 17 and that the northbound queue began transiting the river soon afterward. He said the Boone’s tanks were pumped dry, and it was not possible to determine how much pollution may have escaped into the river, although a sheen was visible on the water.

Caption for photo: An Okie Moore Diving and Marine Salvage rig hoists the mv. Boone from where it sank at Upper Mississippi River Mile 43. An unknown passing tow apparently did damage to the wheelhouse, and the Boone had rolled onto its side, making it more difficult to recover.