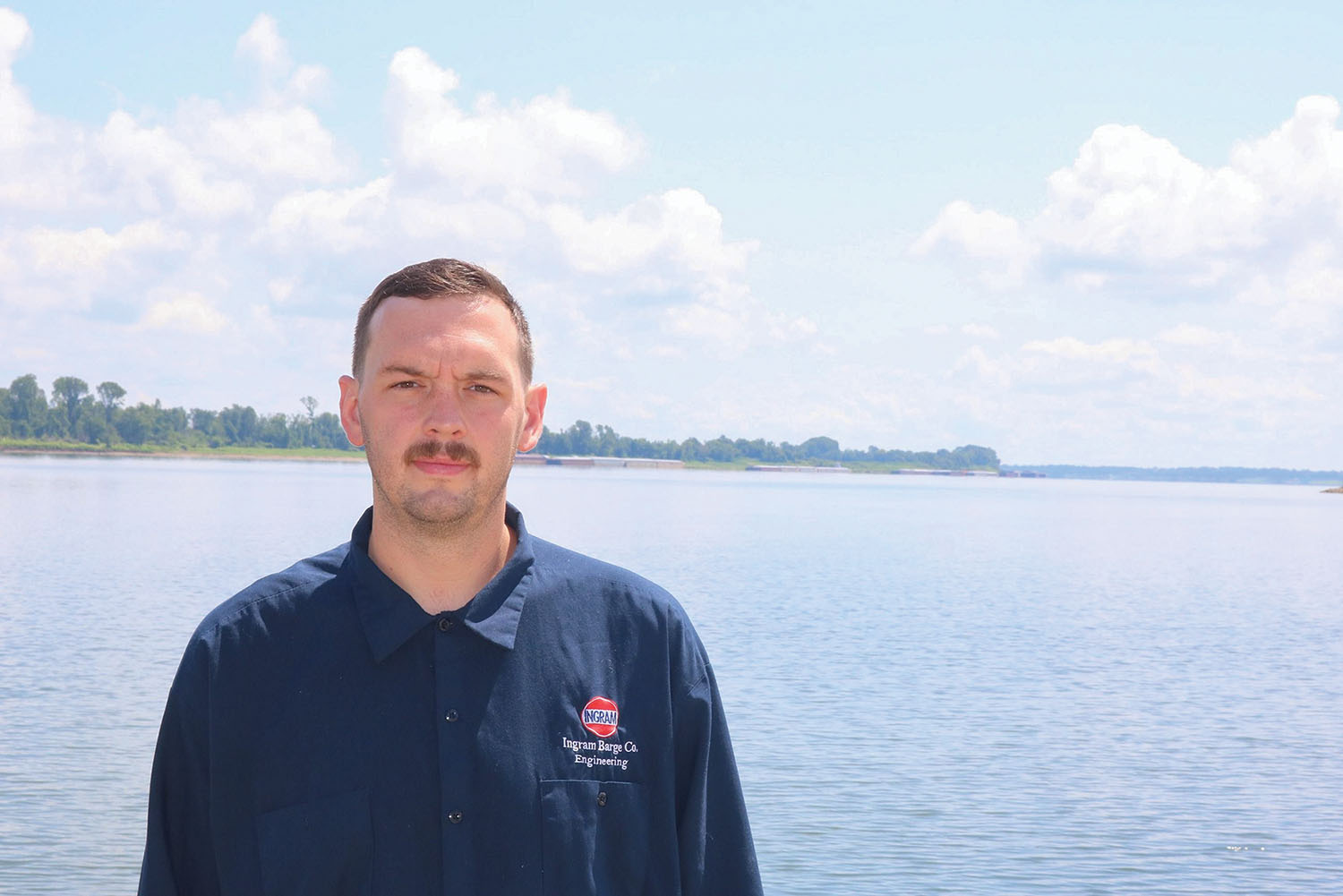 Zach Burkhart is following in his family’s footsteps.

Like his grandfather, Burkhart, 28, of Dover, Tenn., is an engineer.

But those aren’t the only footsteps he follows.

Four other members of his family are, like him, employees of Ingram Barge Company. His father is Capt. Mark Burkhart, captain of the mv. Francis R. Keegan. Extended family working at Ingram currently include his uncle, Mickey Burkhart, and cousins Mike Burkhart and Jeff Burkhart.

“My father’s side of the family have all worked out here,” Burkhart said. “My father has been with Ingram for 30-plus years now, my uncles and cousins and different members of the family have worked for Ingram. The company has looked after the family since before I was born, so I figured I would do the same and follow in their footsteps and make something for myself.”

Currently, Burkhart is a port engineer working for Ingram out of Ingram’s Paducah, Ky., office. He made the transition from boat to shoreside two years ago.

Burkhart has worked for Ingram for nearly nine years.

“I started as a green deckhand,” he said. “I started on deck, and I did that for three years. Then I was accepted into the junior engineering program that we have, and I trained a couple of years in that department.”

Even with so many family members working for Ingram, Burkhart and his grandfather have been the only two to go to the engineroom. Perhaps that is not unexpected, as the two were very close and spent a lot of time together when Burkhart was younger.

Burkhart remembers his grandfather teaching him how to work with tools, selecting the right tool for the job and working safely. They would also ride four-wheelers together, a hobby that led Burkhart to work at a racing and all-terrain vehicle shop before coming to Ingram.

“He never saw anything as unachievable,” Burkhart remembered. “He was the one you would go to as a child who would fix things.”

Now, Burkhart is the one who gets satisfaction out of solving problems and making repairs. He said it’s not an unexpected career path for him. Even when attending Nashville Auto Diesel College after receiving a pair of scholarships, he selected a course of study that would benefit him in marine engineering. As a deckhand, he enjoyed helping the boat engineer on his free time, learning more. He is continuing to improve his skills by attending online classes at West Kentucky Community & Technical College, working toward his associate’s degree in marine engineering.

In his current position, Burkhart oversees about a dozen boats running the Lower Mississippi, Upper Mississippi, Tennessee and Cumberland rivers. He monitors them to ensure that maintenance is up to date, and participates in safety and other audits.

“You could ask anyone at Ingram what the No. 1 priority is, and the answer is safety,” he said. “They prioritize safety first and foremost.”

He also keeps a close eye on the budget, however, finding ways to efficiently spend repair funding and prevent cost overruns.

When something goes wrong on a boat, it’s often Burkhart who gets a late-night or early-morning call that equipment has gone down, but he said that’s all part of the job.

Something he likes about the position is still getting to go out on a boat on a regular basis, helping to figure out what is wrong with a piece of equipment.

“There is a sense of satisfaction when you have a problem in front of you and you’re able to find a solution and see the end product perform as it should,” Burkhart said. “I enjoy that.”

Among his largest professional successes so far have been participating in complete refurbishments of two vessels.

“We took the boats down to bare steel in the interior,” he said, remodeling as well as repowering them and making upgrades to electrical and piping systems.

Outside of work, Burkhart prioritizes time with his wife, Jordan, and their 2-year-old son, Grant, who likes to watch boats as they go by on the Cumberland River, near their home.

As for the future, Burkhart said he hopes to keep climbing Ingram’s career ladder as far as he can. And maybe, he said, Grant will want his own place in the company some day.

“It’s been good to me and my family, and that would be a good path for him to take if that’s what he wants to do,” Burkhart said. “I feel as if I’m very fortunate to have worked around such great people who trained me, not only in the engineroom but on the deck and in the position I’m in now. I’m very fortunate to work around talented people who help me better myself.”