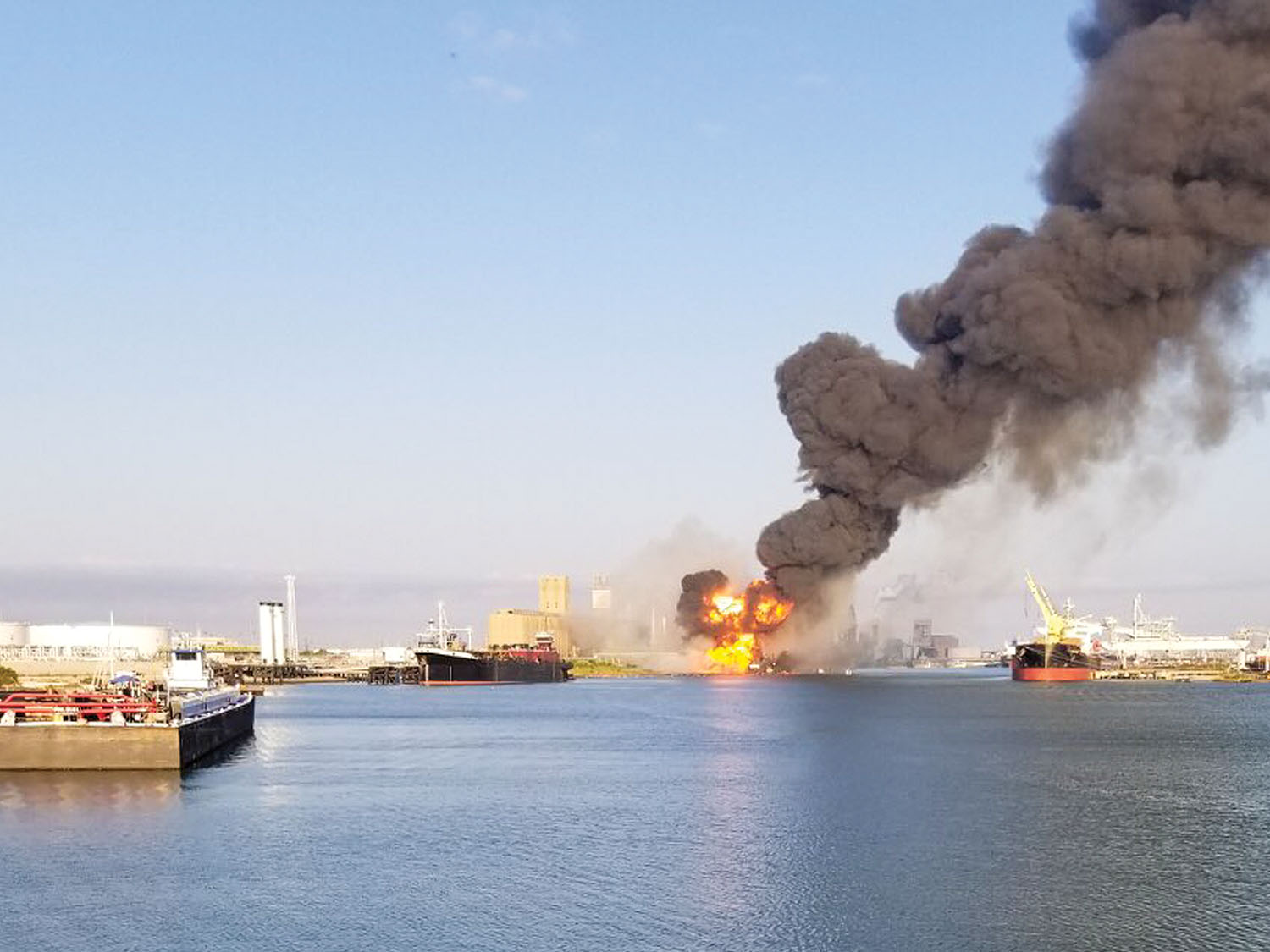 Four crew members died and others were injured August 21 aboard the cutterhead dredge Waymon L. Boyd in the Corpus Christi Ship Channel when the vessel, part of Houston-based Orion Marine Group’s dredge fleet, reportedly struck a pipeline, which triggered an explosion and vessel fire.

The incident occurred around 8 a.m. in the upper reaches of the Corpus Christi Ship Channel in the area of Tule Lake Channel. Initially, the U.S. Coast Guard closed the port’s inner harbor inward from the Harbor Bridge. Later, as incident responders began recovery and salvage efforts, the Coast Guard established a safety zone between the Chemical Turning Basin and Viola Turning Basin.

Coast Guard Air Station Corpus Christi immediately launched an MH-65 Dolphin helicopter to the area, where two injured crewmembers of the Waymon L. Boyd were hoisted aboard and transported to a nearby hospital. Also responding to the initial fire and recovery mission were two 45-foot response boats from Coast Guard Station Port Aransas; crews from Coast Guard cutters Chinook, Sturgeon and Manta; the Port of Corpus Christi police and fire departments; Signet Maritime tugs; the U.S. Army Corps of Engineers; the Texas Commission on Environmental Quality and the Texas General Land Office.

Emergency responders battled the fire aboard the Waymon L Boyd throughout the day August 21, with search and rescue efforts ongoing. The fire was finally fully extinguished around 10 p.m. that night when the vessel broke in two and sank. In the early morning hours of August 22, the body of one of the missing crew members was recovered. Emergency responders found the body of a second missing crew member about 10:45 a.m. that day.

While the incident was initially reported as a pipeline-related explosion and fire, Port of Corpus Christi CEO Sean Strawbridge, speaking at an August 22 press conference, cautioned that it will take a full investigation to identify the precise cause of the explosion.

“On behalf of everyone at Orion Marine Group, we appreciate the tireless efforts of the Coast Guard, the Port of Corpus Christi and other responders to help locate and recover our missing crewmen,” DeLuca said. “Thoughts and prayers continue to be with their families and friends, and we will continue to support them through this difficult time as our top priority. We’re fully focused on supporting the effort to recover our crewmen and the investigation into this incident.”

During the press conference, DeLuca was asked about Orion dredge crews’ protocol for identifying and operating in the vicinity of pipelines.

“Prior to dredging, we do a complete locate of all pipelines,” DeLuca said. “We work with the pipeline operator to identify where the pipeline locations are. Those lines are marked. We do not operate our dredges within 10 to 15 feet of any pipeline, bulkhead or anything related to that.”

Pollution response and salvage efforts continued through the weekend, and on August 24 salvage crews recovered the remains of the final two missing crewmembers of the Waymon L Boyd. Orion Marine Group CEO Mark Stauffer confirmed the recovery in a statement later that day.

“We can confirm that all four missing crewmen have been recovered,” Stauffer said. “We are grateful to the U.S. Coast Guard, the Port of Corpus Christi Authority, and the rest of the associated agencies for their tireless efforts in assisting in the search and recovery efforts. We are devastated by the loss of four of our colleagues, each of whom has been a valuable part of the Orion team for many years. Our heartfelt prayers and sympathy are extended to their families and friends, and we ask that everyone please respect their privacy as we all work to recover from this terrible incident.”

In all, the Texas General Land Office, which led the oil spill response, reported about 1,600 gallons of diesel fuel removed from the water, along with 680 gallons of a diesel fuel/water mix.