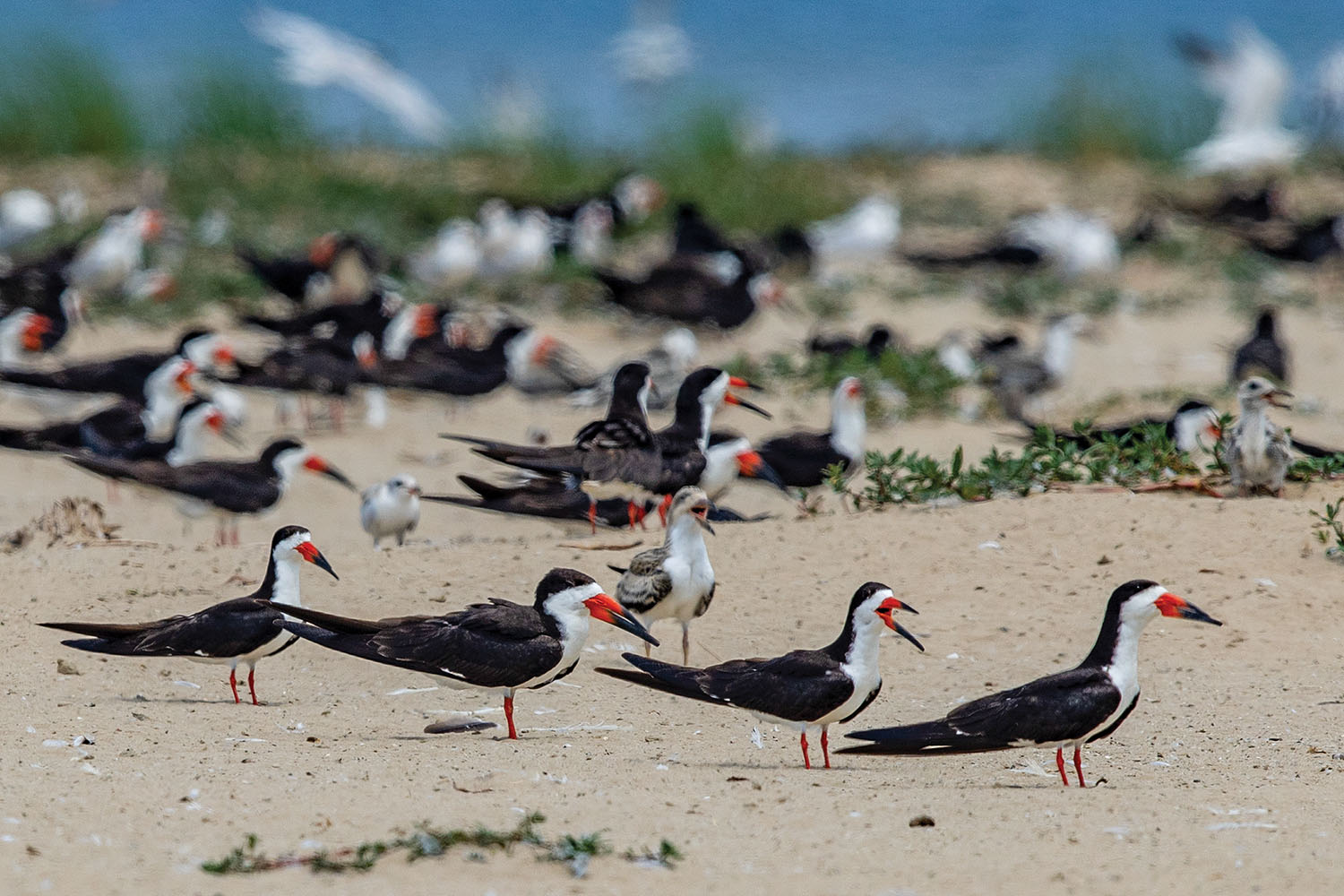 Mariners and anglers lucky enough to have visited the Chandeleur Sound by way of Baptiste Collette late this summer likely beheld an island of avian wonder as they left the northeast-facing Mississippi River outlet and emerged into the sound.

There, on a circular island piled high with sand, tens of thousands of nesting birds crowded onto four-year-old Gunn Island. The sight, and the island’s very existence, mark the latest in a long line of success stories related to the New Orleans Engineer District’s Beneficial Use of Dredged Material program.

The New Orleans Engineer District has a long history of beneficially using dredge material to create new marsh, islands and wetlands along Louisiana’s fragile coast. In the mid-1970s, with the deepening of Southwest Pass, the Corps soon ran out of traditional dredge material disposal space and began placing it in the open bays and marshes that line the Mississippi River.

Then, in the late 1970s when the Corps dredged Baptiste Collette, part of that project was constructing a string of bird islands near the mouth of the channel.

“Over time, we continued to maintain and add to those islands,” said Rick Broussard, a more than 40-year veteran of the New Orleans District’s waterways section, which oversees dredging contracts for both maintenance dredging and new construction projects.

Between 1977 and 1999, the Corps built a total of six named bird islands near the end of Baptiste Collette. The last and northernmost island was named Willet Island.

“From 1999 through 2015, we didn’t build another island,” said Jeff Corbino, the environmental lead for the New Orleans District’s maintenance dredging program. “It wasn’t until fiscal year 2016 that we started on Gunn Island.”

That year, ahead of an influx of towing vessels crossing the Chandeleur Sound en route to the Gulf Intracoastal Waterway due to the extended closure of the Inner Harbor Navigation Canal Lock in New Orleans, the Corps dredged Baptiste Collette, placing about a million cubic yards of material to form a new bird island.

Gunn joined the Corps civilian staff in the late 1970s as part of the waterways section, working alongside Broussard. A New Orleans native who graduated from the University of New Orleans in 1969 (then called LSU-New Orleans), Gunn was involved in the Barataria Waterway and the Mississippi River-Gulf Outlet (MRGO). He later moved to the operations division in 1991 or 1992.

Throughout his career with the Corps, Gunn distinguished himself both by finding creative ways to stretch dredge funding to allow for beneficial use of dredge material and for representing the Corps in the community as part of the waterways and operations teams.

“Bob was always very proactive as far as utilizing material beneficially,” Broussard said. “I think that came from when he worked in waterways section as a supervisory engineer, overseeing plans and specs. When he went to operations division, Baptiste Collette was one of the projects he oversaw, as far as the maintenance and construction for the project.”

And Gunn’s influence extended beyond the east bank of the river as well. Broussard recalled how Gunn was instrumental in work at Grand Terre Island, located just east of Grand Isle, La., on the west bank of the river. For the Barataria Waterway project, the federal standard, or the requirement to place dredge material in the cheapest and most environmentally feasible location, originally called for the open water disposal of material in the Gulf. Gunn, though, pushed to revise that plan to allow material to be placed on Grand Terre.

“Some people thought that was stretching it a little far,” Broussard said, later adding, “He had the extra money to use, and he used it to do that beneficially. That’s another thing I remember about Bob.”

Corbino, who joined the Corps in 2004, about five years after Gunn passed away in October 1999, said Gunn really distinguished himself for his resourcefulness in making those types of beneficial use projects become reality.

“The stories I’ve heard about him was that he was able to stretch the federal dollar,” Corbino said, “in areas like the Houma Navigation Canal, where there’s an area called Bay Chaland where Bob was able to get some extra money for rock cells to protect newly created marsh in Terrebonne Bay. He was the engineer advocate for those types of operations.”

And besides that, Gunn was known as a team player, mentor and a leader who encouraged collaboration.

“He was very well respected and well liked,” said Tracy Falk, an operations manager with the New Orleans District. “People loved working with him. He was one of those types of engineers that was actually looking for ways to do environmental enhancement and restoration.”

Falk first came to the district as a student in 1992. She originally worked in engineering and joined Gunn as an assistant operations manager in 1997. Falk worked alongside Gunn until October 1999, when he died unexpectedly.

“He was a natural mentor to a lot of young people,” Falk said. “He would sit down with the recent graduates, talk to them, help them find their way and get into jobs and offices in the district they were interested in. And that was before we had an official mentoring program. I got the benefit of his mentorship by working directly for him.”

Through annual maintenance dredging, the Corps added to Gunn Island in 2018, 2019 and 2020, placing a total of 3 million cubic yards of material on the island thus far and ultimately bringing the island to a height of eight feet above the surrounding water level.

Corps officials said other resource agencies were initially reluctant to support raising the island that high above the water line. From the Corps’ perspective, though, pumping it that high made good use of dredge funds and made the island more sustainable and resistant to wave action. That proved the case with an early summer tropical storm.

“As it turns out, we had a tropical storm come through in the middle of nesting season and totally wash out all the tern nests on the Breton and Chandeleur islands,” Corbino said. “Those birds picked up and found an island at plus 8 that wasn’t going to get washed over by the tide, and they had a second clutch of eggs.”

Corbino said the Corps team was first notified of the birds nesting on Gunn Island by dredge contractors working in Baptiste Collette. Corps officials visited Gunn Island in early August to see for themselves and were amazed at what they found. A Wildlife & Fisheries agent that visited with the group estimated at least 50,000 adult birds were nesting on the island at that time, with an equal number of chicks.

“Sure enough, we get out there and see what looks like a cloud of birds,” Corbino said. “I’d never seen anything like it before.”

Corbino joked that the birds quickly made it clear they didn’t want the people anywhere near their nests.

“What all these sea birds have in common is the parents will get very aggressive with you,” he said. “They’ll dive at your head, stop about 10 feet from you and start squawking. Some of them have a way of using the momentum so that, at the bottom of the arc, they’ll poop on you. It’s almost like chemical warfare. They’re aiming for your eyes, trying to scare you away. Think if you were a coyote going for those nests. It was very effective for me.”

While the Corps built the island up to make it resistant to normal wave action, the tiny island on the edge of the Gulf of Mexico remains nonetheless vulnerable to larger storms, much like the rest of the coast. Tropical Storm Marco and hurricanes Laura and Sally all passed near enough to Gunn Island in late August and September to test the island’s resiliency. Fortunately, all three came after the fledglings from the first of August would have already flown.

Corbino said that’s a natural part of the coastal environment.

“The bird islands along Baptiste Collette are unprotected and constantly reworked by everyday wave energy and by tropical storms in ways similar to what is experienced elsewhere along the Louisiana coast,” he said. Natural and manmade islands in this high-energy environment are not stable, and it is common for these features to roll back and change shape in unexpected ways.

“However, it is neither practical or desirable to armor and ‘hold’ these islands in a fixed position,” Corbino added. “Past experiments to enclose coastal features within rings of immobile stone have only demonstrated that the mobile sands easily escape and reform as down-drift islands outside of their protective, engineered shells. In contrast, allowing for this reshaping forced by the tides results in bird islands that resemble natural habitats in form and function, and that are attractive to seabirds that evolved in this environment.”

As in 2016, dredging along Baptiste Collette this year has preceded a closure at the Industrial Canal Lock. That channel maintenance continues to benefit those seven bird islands, including the newest, Gunn Island. Now through much of the fall, towing vessels moving along the GIWW will use Baptiste Collette, pushing barges past Gunn Island, continuing the cooperative endeavor of navigation and land-building that Bob Gunn championed during his career with the Corps.

Caption for top photo: Gunn Island, built 8 feet high, provides more secure habitat than some of the nearby islands. (Photo by P.J. Hahn)