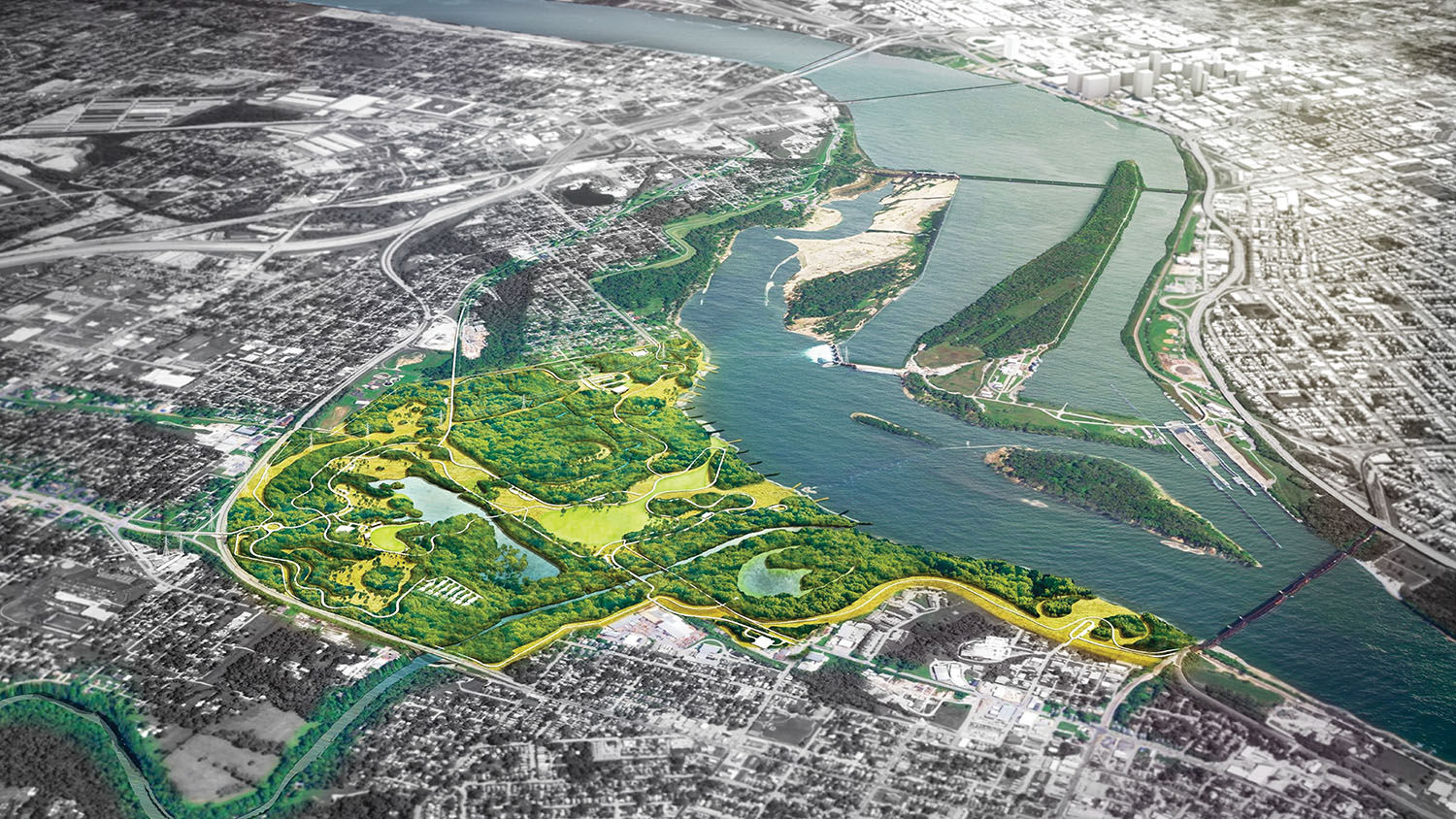 Riverfront Park Designed To ‘Lean In’ To Climate Change

A riverfront park planned for southern Indiana, just across the Ohio River from Louisville, Ky., is being designed as “climate resilient.”

The River Heritage Conservancy is developing the proposed 600-acre Origin Park as part of a public-private partnership. The park site is on the Ohio River’s north bank at the intersection of Silver Creek and the Ohio River Greenway. It encompasses parts of the cities of Jeffersonville, Clarksville and New Albany and is adjacent to the Falls of the Ohio. The series of properties wraps around the Ohio River Greenway, which connects to the nearby Big Four Bridge, a former railroad bridge now converted into a pedestrian bridge over the river, linking to parklands on the south riverbank.

The area contains former industrial sites and landfills and is prone to flooding, but it began to stand out over time as a missed opportunity for development, he said.

“This land that we’re working on for the park was absolutely the most foundational piece of property in our region, but then it was forgotten about because it flooded,” Martin said.

The land has historical significance. The Eastern herd of buffalo would cross the river at the site, Martin said, and Meriwether Lewis and William Clark met there to begin their famous expedition to the West. The Falls of the Ohio was the only navigation barrier to early commercial trade along the Ohio. The natural stopping off point for river trade led to the formation of the city of Louisville.

“Our project is located at the toe of those falls, and that’s where our community began,” Martin said.

Yet it had been ignored, he said, mainly because repeated flooding kept it from being suitable for homes or businesses. Developers reviewed a climate study suggesting that more regular flooding  and more intense flooding is likely to occur as time passes, but that did also not dissuade them. They worked closely with the Corps of Engineers, studying 50-year and 75-year flood projections.

“The Corps has been our expert in that,” Martin said. “They’ve been enormously helpful in shaping our thinking and providing data that has really helped us.”

The group decided to focus their efforts on building a place people would want to go to even when it floods, a place with elevated structures and a circulation plan (how people move through a landscape) that actually takes advantage of flooding.

“It’s an adaptive use that can ‘lean in’ to climate change,” Martin said.

The conservancy hired landscape architecture firm OLIN, based in Philadelphia and Los Angeles, as the lead designer.

What developers are looking for, Martin said, is “landscape that takes your breath away and makes you feel the power of nature.”

He added of the Ohio River, “When it is in flood, you feel small, and you feel small in a hurry, and we think that’s a good thing.”

He used what he calls a big and spooky woods as an example of how landscape can be made useful in various climate settings. When it is dry, he said, hikers can enjoy it. When it floods, it could be good for paddlesports.

“There’s no current,” he said. “It’s swampy, it’s eerie, and it feels sketchy. We leaned into that.”

Architecture will include safe vantage points where people can see the beauty and the majesty of the river, whether or not it is in flood, he said. The park will also include what he calls a thoughtful plan for planting, using species that can withstand flooding.

As inspiration, developers have looked at Gardens by the Bay in Singapore as well as Hunter’s Point South Park in Brooklyn, N.Y., and The Presidio in San Francisco, Calif.

Martin said the park will offer a landscape fundamentally different  from the parks on the Kentucky side of the river.

Over there, he said, developed areas, picnic pavilions, playgrounds and a sprayground are prominent features. On the Indiana side, he said, it is going to be much more wild and rugged and “embrace nature at its fullest.”

“The stars at our site are the birds, the river otters, the flying squirrels that call it home,” he said.

The conservancy has acquired 200 acres of land already, with another 200 acres of public land that could be brought into the project.

While the COVID-19 crisis has created difficulties for many projects, Martin said it has also shown the importance of having public green spaces.

“The upshot is I don’t think there’s a better time to raise money for public parks because never before have parks seen such use as they have over the last six months,” he said.

A capital campaign is now being planned to help to raise necessary funding for the next steps, including an undisclosed pilot project anticipated to launch next year, Martin said. The park could take years to complete over several stages.

Caption for photo: A map shows Origin Park’s location in relation to the Indiana cities of Clarksville, New Albany and Jeffersonville as well as Louisville, Ky., across the Ohio River. The proposed 600-acre park, designed by its developers to be climate resilient, would stretch along the north riverbank near the Falls of the Ohio and the Big Four pedestrian bridge and wrap around portions of the Ohio River Greenway. (Map courtesy of the River Heritage Conservancy)