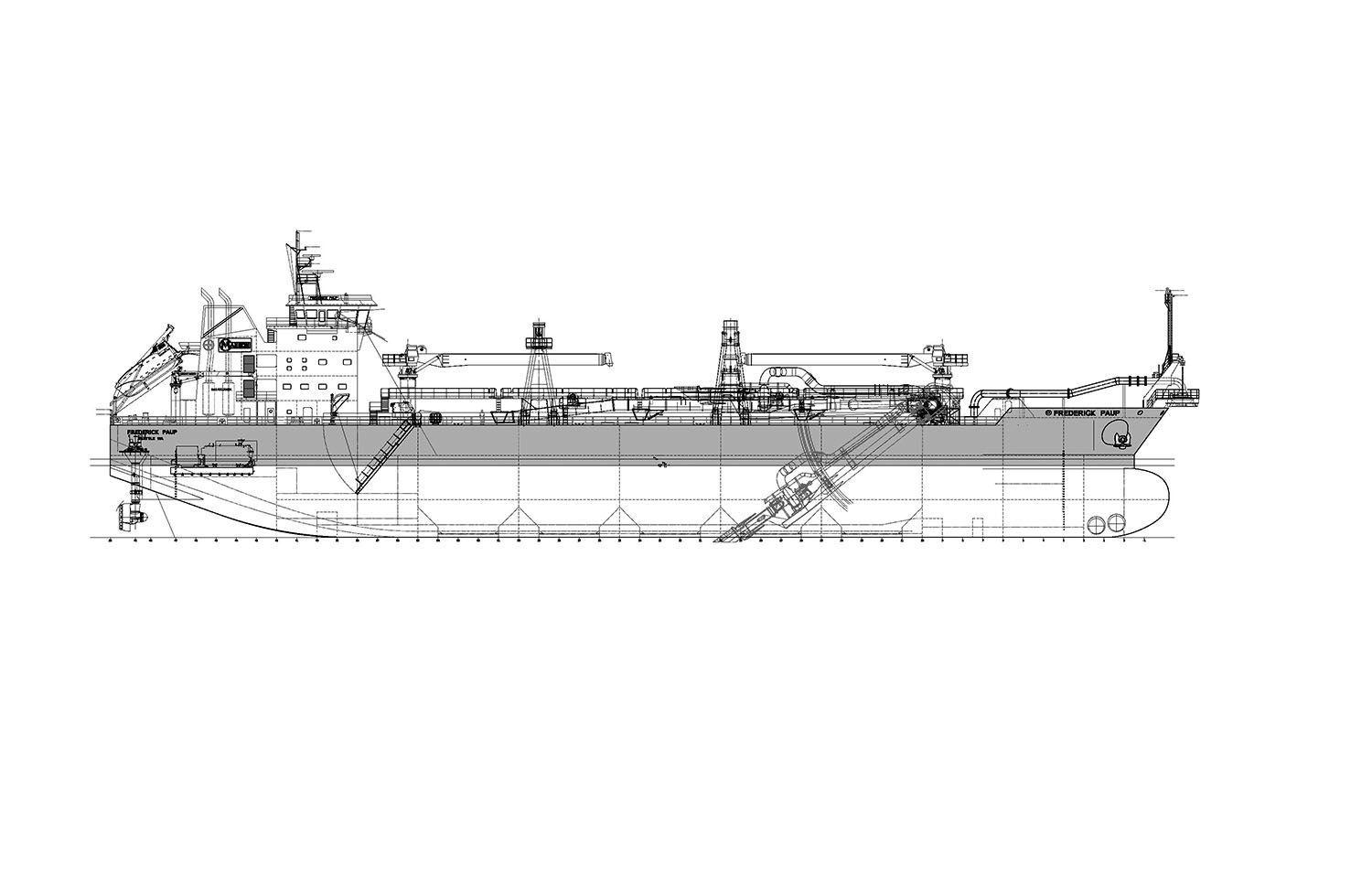 Seattle-based Manson Construction Company has announced a contract with Keppel AmFELS of Brownsville, Texas, to build a new trailing suction hopper dredge to be named the Frederick Paup. The dredge, designed in collaboration with Hockema Whalen Myers Associates Inc. (HWMA), also of Seattle, will measure 420 feet by 81 feet, with a draft of 28.5 feet.

The Frederick Paup will have a hopper capacity of 15,000 cubic yards, which will make it the largest U.S.-flagged hopper dredge. The dredge, powered by a diesel-electric system, is expected to be in operation by the spring of 2023.

“We are pleased to be partnering with Keppel AmFELS, due to their impressive vessel construction capabilities,” Manson Construction President John Holmes said. “Their value proposition is strengthened by our shared focus on safety. Once complete, the self-propelled hopper dredge Frederick Paup will be the largest in the United States, representing Manson’s single biggest investment in its 115-year history.”

Hal Hockema, president of HWMA, said the dredge design project represents years of collaboration between his firm and Manson.

“Our longstanding relationship with Manson covers more than two decades of successful hopper dredge design and other engineering work,” Hockema said. “Complex projects like this provide an opportunity to offer our superior engineering and client relations capabilities. I also want to personally thank our design team at HWMA, and especially our project managers, Craig Pomeroy and Michael Minnig, for their fine work in developing this design. Our focus at HWMA is to ensure that the Frederick Paup will be a major force in the dredging market for decades to come.”

The dredge will be named for the chairman of Manson’s board of directors.

“This dredge is the culmination of years of work by our dedicated team, and I am honored to bear its name,” Paup said. “We are proud that it will be U.S.-built, U.S.-flagged and U.S.-crewed and will support the U.S. Army Corps of Engineers’ mission of keeping the marine transportation highway open throughout the United States.”

The Frederick Paup will be the first hopper dredge built at Keppel AmFELS, the Gulf Coast subsidiary of Keppel Offshore & Marine. Overall, it will be the ninth newbuild dredge by the Keppel family of shipyards, which are scattered across Asia, the Middle East, South America and the United States. The company has completed four and has four others under construction. The company is headquartered in Singapore.

“We are pleased to be selected by Manson Construction Company to build the largest U.S hopper dredger,” said Mohamed Sahlan Bin Salleh, president of Keppel AmFELS. “It is a testament to the capabilities of our shipyard to build a wide variety of vessels for the Jones Act market. This project will be supported by our highly skilled local workforce and suppliers across the U.S. This is our first newbuild project with Manson, and we look forward to supporting them as they grow their fleet of vessels.”

According to the announcement from Keppel AmFELS, the Frederick Paup will primarily work along the Gulf Coast and East Coast of the United States.

Caption for photo: Drawing of new dredge to be built by Keppel AmFELS in Brownsville, Texas,