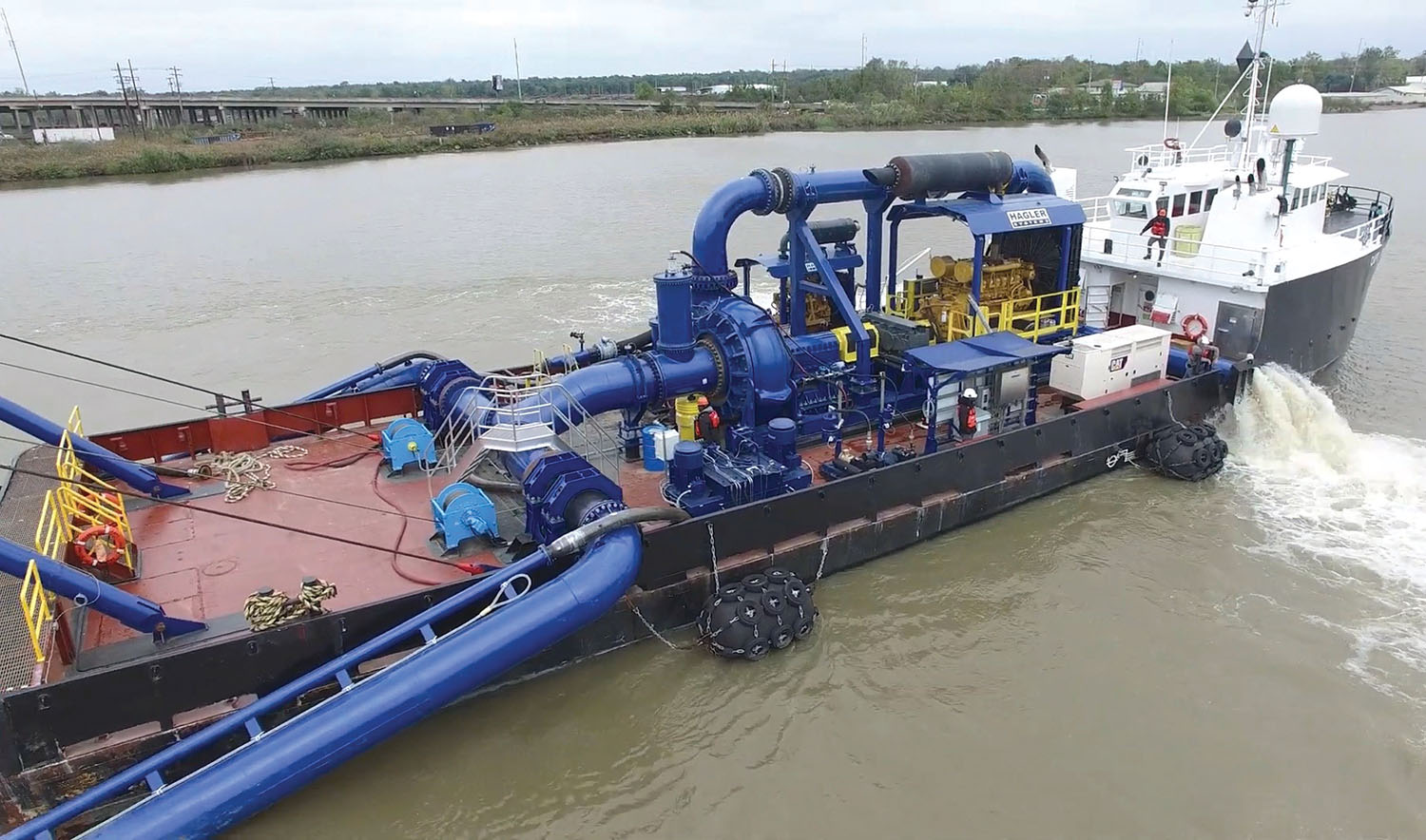 Almost six years have passed since the Port of Morgan City saw its last foreign-flagged ship call on the port. From late 2014 to early 2015, 22 ships called on the port, importing cargoes and exporting regional goods, like locally grown rice.

But that success was short-lived due to two conspiring factors. First, the Atchafalaya River Bar Channel, between Eugene Island and the offshore sea buoy, suffers from a constant buildup of “fluff,” a soupy, rapidly accumulating silt that, while not as dense as river sand, nonetheless makes it impossible for ships to pass. The second issue was funding. To keep the bar channel dredged to its authorized dimensions of 20 feet by 400 feet would require operating a cutterhead dredge or hopper dredge semi-permanently and at great cost.

“In 2014, we knew we had to do something different,” said Mac Wade, executive director of the Port of Morgan City. “We couldn’t continue how we were.”

Working closely with the U.S. Army Corps of Engineers, the Port of Morgan City was able to set aside some operations and maintenance funds for a demonstration program. The plan was to test whether simple agitation would suspend the fluff below a water density of 1,200 milligrams per liter, the threshold for safe navigation. That demo program took place in the summer of 2016, with a hopper dredge sucking the fluff through its drag arms and pumping it back overboard.

The demo was a resounding success, increasing the navigable depth of the bar channel from 9-1/2 feet to more than 18 feet.

After studying agitation dredging and concluding it would work for dispersing the fluff in the Atchafalaya River’s bar channel, the Corps hosted an industry day in late summer 2017 to see if there was interest in building specialized equipment for the project. Rather than contracting with a cutterhead or hopper dredge, the Corps and the Port of Morgan City were looking for a specially-built dredge, designed with the bar channel in mind.

“Everyone walked away except one company,” Wade recalled. “Everybody said no. Then someone behind me raised their hand and said, ‘We’ll do it.’”

Jon McVay, president of Fairbanks, Alaska-based Brice Civil Constructors, part of Calista Corporation, said he heard about the fluff issue and the industry day while his company was building some boats in the region at the time. Brice is involved with “horizontal construction” in Alaska, the state of Washington and the Gulf region. McVay said the company saw the problem with fluff in the bar channel as an opportunity to put the company’s creativity to the test in the dredging industry.

With that in mind, McVay went to the industry day to learn more.

“We conceptualized what we could do differently to drive value to the port and the Corps of Engineers, so the channel would be open more,” McVay said. “At the industry day, not a lot of innovation was happening besides ours. Our suggestion was met with some resistance, but we still thought, ‘We think we have something here that will work for the port, keep the river open and be a fun job.’”

The concept was to mount a dredge pump with two drag arms on the deck of an Offshore Supply Vessel (OSV). Rather than pumping material into the hold of a hopper dredge, though, the vessel would pump the material back overboard.

“It’s very similar to a Zamboni that, in between periods, goes and cleans the ice, shaves a little off the top and puts down a new layer,” McVay said.

It was a long process to work out details for a contract, with the Corps of Engineers finally awarded a four-year, single award task order contract to Brice on October 30, 2018. What followed was about a year’s worth of planning and construction.

Brice partnered with Hagler Systems to acquire a pump capable of pumping 70,000 gallons per minute.

“It is the largest pump for hopper dredges in the American fleet,” Wade said. “Great Lakes has the Ellis Island, which is the largest hopper dredge in America. It has two of these pumps on it, and Brice bought pump number three. When I say it’s a beast, I mean it’s big. And it’s getting us a channel.”

Halimar Shipyard in Morgan City retrofitted the OSV, which is owned and crewed by Barry Graham Oil Services LLC (BGOS).

McVay said the Brice team completed fabrication of the dredge plant, called the Arulaq, which means “agitate” in the Yupik Alaska Native language, in November 2019, and started dredging in December 2019.

The early going wasn’t easy. Because it had been so long since the bar channel had been dredged, the Arulaq encountered all kinds of debris.

“The dredge heads were constantly sucking up crab traps, shrimp nets, wire, steel cable, large rope, you name it,” Wade said. “Anything and everything that’s packed down in that mud. As you cut down deeper and deeper, it’s going to get sucked up in it.”

“We had mechanical challenges we had to overcome,” McVay said, “but we’ve been pumping now for nearly a year. The average volume we’ve pumped on a month-to-month basis is about 5 million cubic yards per month. It might be a little higher now.”

Unlike a traditional dredge contract that’s paid by the day, Brice’s contract is hourly and based on the density of the material and the flow rate, measured in gallons per minute. Flow rates are tracked by the Corps’ Dredge Quality Management System.

The cost savings measured per cubic yard of material pumped is significant compared to cutterhead and hopper rates. While a cutterhead dredge might cost $6 to $7 per cubic yard pumped and a hopper dredge in the $4 to $6 range, the Arulaq and its innovative, long-term contract carry an average cost of $0.10 to $0.20 per cubic yard.

What’s more, the system is working. Since the Arulaq hit its stride toward the start of the year, the dredge has been exceeding its target and steadily deepening the bar channel closer to a navigable depth.

“We got through all the challenges, all the red tape,” Wade said. “Now the proof is in the pudding. Look at the numbers the dredge is putting out. It’s well worth it.”

Wade said the port still has to tackle sediment farther up in the Atchafalaya River between Eugene Island and Crewboat Cut. A dredge is scheduled to begin work on that stretch in November. If all goes well, Wade said he hopes to be able to welcome some of the same ships in the spring that called on the port six years ago.

“If we get this channel open, those people are ready to come back,” he said. “They’re saying, ‘When you get the channel open, call us.’ The business is here for Morgan City. We’re in the perfect location for it. There’s business for smaller ships to come here.”

For Brice, McVay said the company is focused on its task at hand, but also with an eye toward further growth in the dredge industry.

“This dredging project was an organic move to get into the dredging industry,” McVay said. “It was one that was made strategically with an eye on getting into an industry that’s growing and might need more players. We’ll focus on smaller projects that might be difficult logistically or otherwise.

“We have also focused on getting this under control and not growing so rapidly that we don’t learn from the first one,” he added. “What we’re trying to do is learn from this one, get some process improvements down from designing to building and operating, and put that in our back pocket for the next opportunity going forward.”

Caption for top photo: The vessel Captain John Graham tows the dredge Arulaq. The blue piping that is visible represents most of the dredge works. The fine silt sprays on the equipment, which means the deckhands are almost always constantly swabbing the dredge. (Photo courtesy of Brice Civil Contractors)