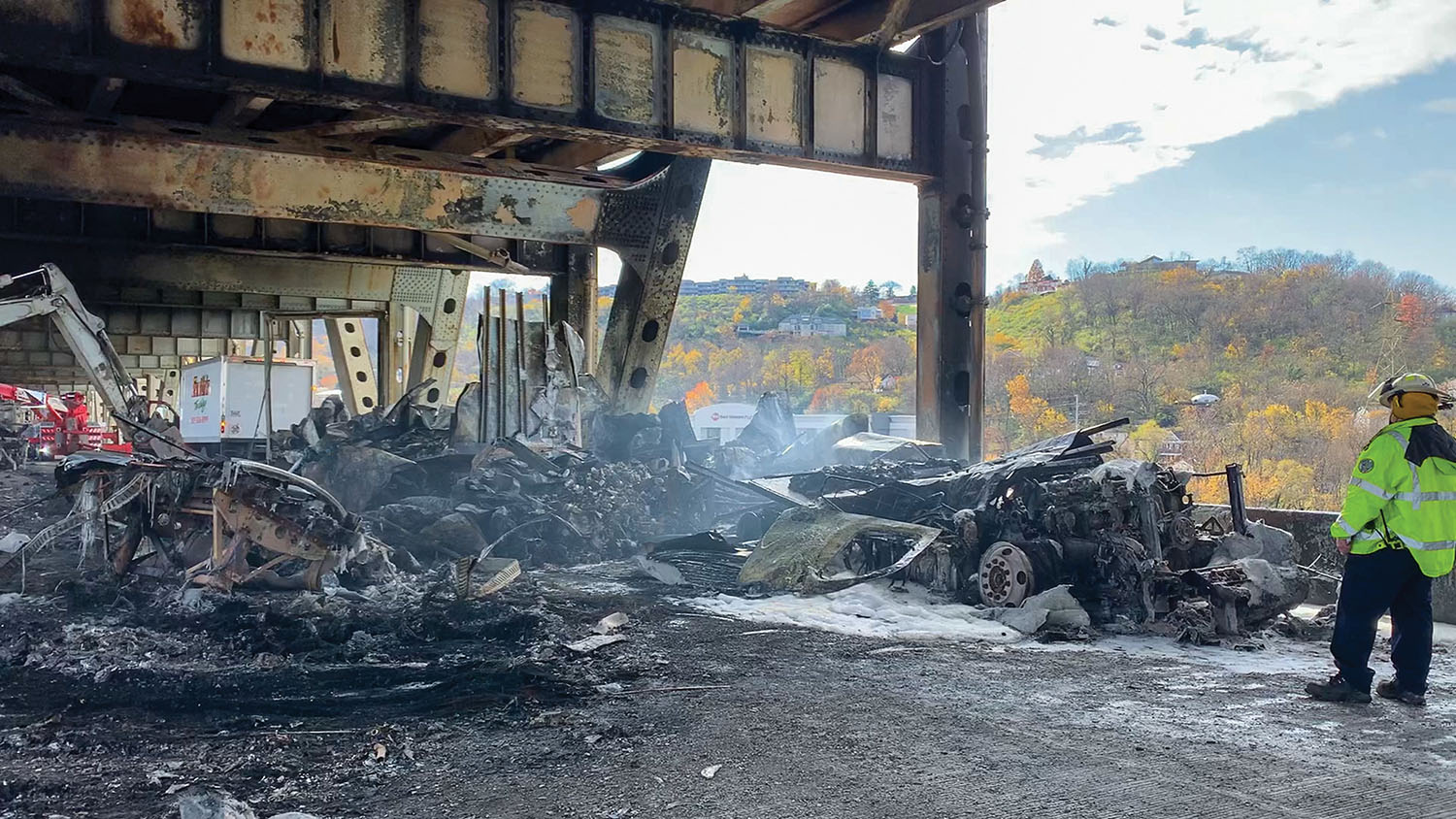 A wreck and fire on a major bridge across the Ohio River in the Cincinnati, Ohio, region earlier this month continues to hamper transportation, although the river itself has reopened.

Emergency repairs on the Brent Spence Bridge in Covington, Ky., have begun, but it is not expected to reopen until late December. The bridge normally carries about 160,000 vehicles a day across the Ohio River on I-71/75. Traffic is being detoured via I-275 and I-471. Updated information on repairs will be posted to brentspencerepair.com.

“If you can imagine the worst thing happening to our transportation system in this region, it just happened,” said Mark Policinski, CEO of the Ohio Kentucky Indiana Regional Council of Governments. “The accident led to a fireball on our bridge burning 1,500 degrees. It shut down the bridge until at least December 23, so we’re talking about it being closed roughly six to seven weeks. That bridge is the linchpin not only to our transportation system. It’s the linchpin to the I-75 trade corridor, which runs from Michigan to Miami.”

It also is at the center of the I-71 trade corridor, he said.

“It’s having dramatic impact on the ability to get goods in and out of these private sector firms,” he said.

Normally, he said, more than $1 billion in freight goes across the bridge daily, adding up to more than $400 billion a year.

Regionally, of the 2 million people who live in the Cincinnati area, 60 percent live within five miles of the bridge, he said. Of the 1 million jobs in the region, 70 percent are within five miles of the bridge. Amazon Prime is building its international headquarters at the region’s airport, which is on the south side of the river in northern Kentucky. The entire region is fast becoming the e-commerce hub for the United States, Policinski said. “So the amount of movement of goods coming in and out of this region has not only been dramatically increasing but will continue to do so for the foreseeable future,” he said.

The damage took place at roughly 2:45 a.m. November 11, when a commercial vehicle jackknifed for unknown reasons while driving northbound on the bridge’s lower deck, according to the Kentucky Transportation Cabinet (KYTC). After the truck jackknifed, a second truck carrying potassium hydroxide crashed into it.

The collision caused a fire on the bridge. Emergency management personnel said 400 gallons of diesel fuel was the main cause of the fire. An unknown amount of diesel spilled and burned.

“The fire was over the navigable channel, so we closed the bridge after consulting with the Kentucky Transportation Cabinet and the Coast Guard Sector Ohio Valley captain of the port,” said Lt. Jim Brendel, supervisor at Coast Guard Marine Safety Detachment Cincinnati.

Initially, the Coast Guard closed the river to commercial traffic for 1 mile in each direction from the bridge for 36 hours as officials waited for it to cool down and for the wreck and other debris to removed. It reopened the afternoon of November 12 following an initial inspection, but then closed again that evening until the evening of November 13 after bridge inspectors decided they needed more time to ensure the bridge was structurally sound and not in danger of collapsing into the river. Ultimately, it was found to be structurally stable, although in need of extensive repairs.

“We have no anticipated closures at this time,” Brendel said of the river. “If that changes, we will communicate that to our industry partners.”

In less than one week after the crash, a team assembled by KYTC had inspected the damage, designed repairs and awarded a contract to Kokosing Construction Company for emergency repairs. The contract calls for the bridge to be reopened to traffic by December 23. Repairs include replacing a section of the concrete as well as some of the support beams on the upper deck that carries southbound traffic from Ohio to Kentucky. It will be also necessary to replace a section of the concrete on the lower deck that carries northbound traffic from Kentucky to Ohio and to repair bridge electrical and drainage systems, according to KYTC.

Eric Thomas, president of the Central Ohio River Business Association (CORBA), said the incident could have been worse on maritime businesses if officials had not acted so quickly to assess the damage and reopen the river.

“The immediate impact was very concerning since no one knew for sure the extent of damage, and the potential impact to barge traffic,” he said. “The short -term closure, while inconvenient, was a welcome sacrifice toward the final determination that barge traffic could resume after less than about 48 hours of closure.  I am told that the point on the bridge where the incident occurred was directly above the main navigation channel, so any chance of falling debris or, worse, any degree of collapse, posed a very serious threat to all traffic.  Fortunately, the inspections were completed rather quickly with a determination that the damage was not as serious as originally feared.”

It was also fortunate that the crash happened at a time when the recreational boater traffic was substantially over for the season, Thomas said.

“As to other impacts, highway traffic in and around Cincinnati and northern Kentucky is a challenge for both local commuters as well as pass-through traffic,” Thomas said. “The Brent Spence Bridge is the major connection between Ohio and Kentucky, and indeed between the North and the South. There really are not good alternatives, and those alternatives are not designed to carry the amount of traffic that traverses the Brent Spence Bridge. Bypassing the bridge puts an additional real expense burden as well as a time burden, which also adds cost, on all who would otherwise use the bridge.”

Caption for photo: A crash between two commercial trucks on the Brent Spence Bridge in Covington, Ky., on November 11 briefly closed the Ohio River. The bridge, the major connection across the Ohio River in the Cincinnati region, is expected to remain closed until late December. (Photo courtesy of Kentucky Transportation Cabinet)