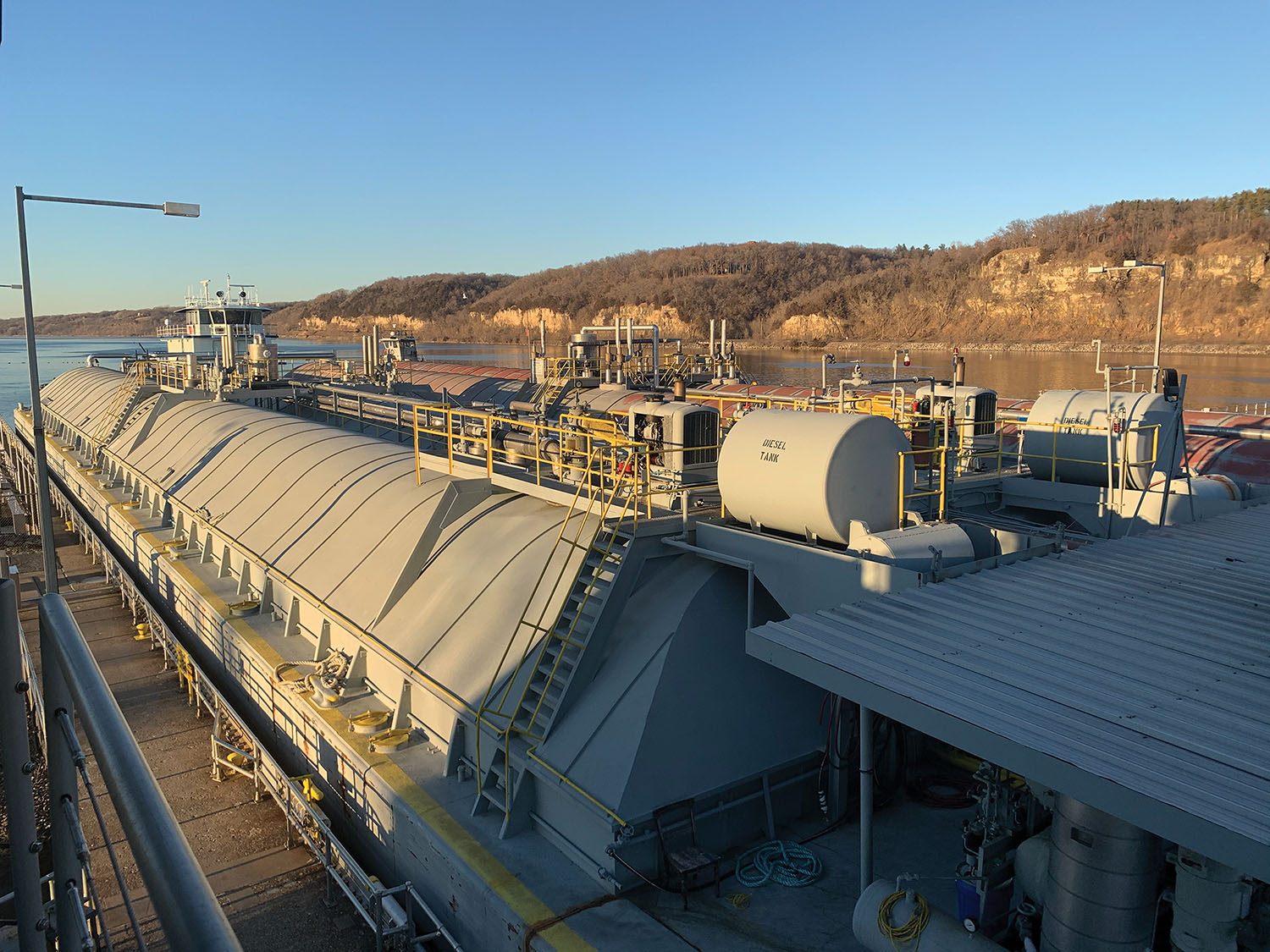 The St. Paul Engineer District locked its last tow, two empty barges pushed by the mv. the Colonel, through Lock and Dam 2 at Hastings, Minn., to end the navigation season on the Upper Mississippi River November 30. The Colonel is owned and operated by Southern Towing Company of Memphis, Tenn.

The last tow of the season usually leaves St. Paul in the last week of November or the first week of December. The 2019 season ended on November 28. The mv. R. Clayton McWhorter was the first tow of the 2020 season, locking through on April 6.

The Colonel is a new boat named after the founder of the new owners of Southern Towing. It has been operating since January, pushing nitrate fertilizer. The Colonel’s namesake, Henry Crown, was born in Chicago in 1896 to poor Jewish immigrants from Eastern Europe. In 1919, along with his brothers Sol and Irving, Henry founded Material Service Corporation (MSC), a construction materials company that suppled sand and gravel—and later, concrete—to worksites around the city.  MSC would quickly grow to become the largest supplier of building materials in Chicago.

Henry married Rebecca Kranz—also the child of immigrants from Eastern Europe—and together they had three sons: Robert, Lester and John. Working with his brother Irving (Sol died in 1921), Henry expanded MSC into the aggregates business, purchasing yards and quarries throughout Illinois. Then, as now, barge transportation was crucial for moving construction materials. In 1929, MSC launched its first towboat, the mv. Material Service, in what would soon become a fleet of towboats and barges.

When the U.S. joined World War II, Henry was determined to serve his country, despite being exempt from the draft and considered too old for combat.  According to a famous story, Henry should have been further disqualified due to poor eyesight and a heart murmur, but he was so determined that he secretly memorized the eye chart and chatted with the doctor while his chest was being listened to, so the murmur was not detected.

Assigned to the Corps of Engineers as a contracting officer, Henry would use his logistical skills to manage military supplies and contracts for the U.S. Army and, later, for other allies.  He was promoted to Colonel within 10 months, a rank he held until his discharge in 1945.  After the war, Henry’s friends and family took to calling him by his military title, and he would be known as “The Colonel” for the rest of his days.

In the post-war boom, the family kept growing, and in 1951 the Colonel acquired the Empire State Building on behalf of the Crown family.  Throughout the 1950s, the Colonel also served as director of the Rock Island Railroad and as a partner in Farmers Investment Corporation.  At the end of the decade, MSC merged with defense contractor General Dynamics (GD), where it would play a key role in the development of the F-16 fighter jet.

In 1967, Henry Crown & Company was founded as the Colonel and his family took a temporary step back from General Dynamics.  In 1986, CC Industries (CCI) was also created to retain operational oversight of the companies owned by the Crown family. The family enterprise started by the Colonel and his brothers more than 100 years ago is now led by a team of their descendants and relatives. The Colonel’s work ethic, patriotism and focus on giving back to the community continue to guide the organization today.

The company acquired Southern Towing’s fleet in May 2019 (WJ, June 10, 2019). “At that time this boat was under construction, and we didn’t have a name for it,” said Southern Towing CEO and President Ed Grimm. “I asked the new owners if they had any suggestions.”

The Colonel was completed in early January 2020 by Steiner Shipyard of Bayou La Batre, Ala., for Southern Towing Company. It is 120 feet long and 34 feet wide and  powered by twin MTU diesels providing 3.700 hp., and features ZF Z drives. “For my taste,  this is one of the most environmentally sensitive boats in America,” Grimm said.

Corps To Renovate Lock And Dam 4

Now that the navigation season has officially ended on the Upper Mississippi, the Corps can concentrate on maintenance. This winter, the Corps will begin winter renovation and maintenance at Lock and Dam 4, in Alma, Wis., on December 7. The repairs require the lock to be completely closed during the maintenance and are scheduled to be complete by March 14.