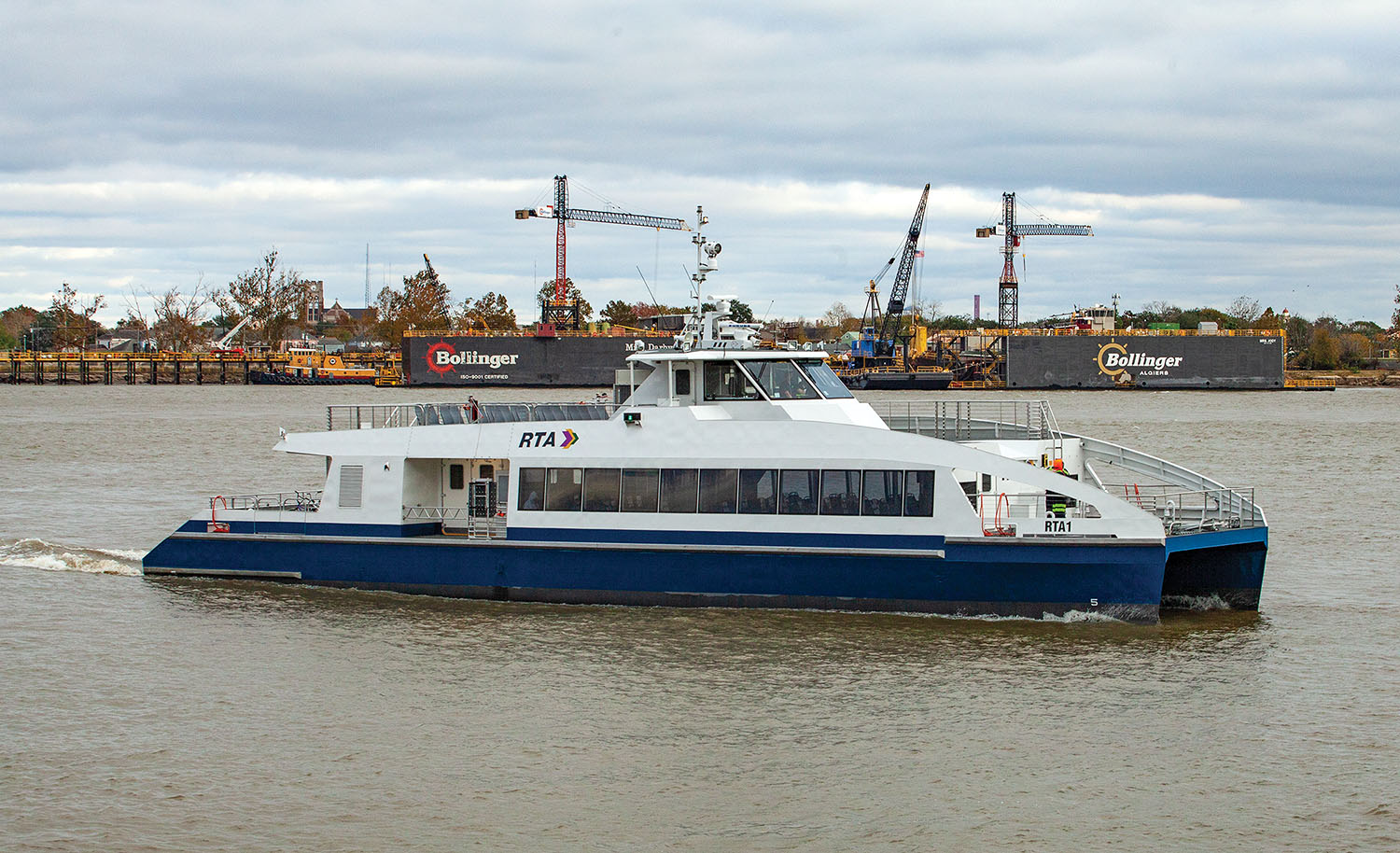 While 2020 and the fear of COVID-19 brought, for a time, the unforgettable sight of empty streetcars rumbling down the streets of New Orleans, the year ended on a high note for another of the city’s modes of public transportation: its passenger ferries.

The New Orleans Regional Transit Authority (RTA) put a pair of catamaran passenger ferries into service during the fourth quarter of 2020, with RTA2 coming online October 10 and the identical RTA1 put into service December 15.

Both ferries, built by Louisiana shipbuilder Metal Shark at its Franklin, La., yard, measure 105 feet long and can carry 150 passengers. To date, Metal Shark has built 36 passenger ferries for the U.S. market, including 22 for New York City.

And while both New Orleans ferries just began transporting passengers between Canal Street and the Algiers neighborhood on the west bank of the river, the vessels are far from brand new. Metal Shark delivered both RTA1 and RTA2 in 2018. Then, for the better part of two years, the ferries remained tied up below Algiers Point.

The journey from then to now is as winding as the Mississippi River through south Louisiana.

Funding for the $5 million aluminum catamarans came through a 2015 Federal Transit Administration Passenger Ferry Grant. The $19 million in grant funds, which included $15.2 million from the federal grant and $3.8 million from the state Department of Transportation and Development (DOTD), was to pay for both the ferries and redevelopment of the ferry terminal where Canal Street meets the river.

City officials aspired to put the vessels into service during New Orleans’ tricentennial celebration in 2018, and initially that seemed feasible. Metal Shark delivered RTA1 in July 2018, with RTA2 following in October 2018. Hope for 2018 operation of the ferries, though, faded when Transdev, RTA’s ferry operator at the time, raised design and equipment concerns with Metal Shark. The shipyard made those requested changes, Metal Shark Vice President of Marketing Josh Stickles said at the time. By then, the vessels had already received a pre-delivery initial Certificate of Inspection (COI) from the U.S. Coast Guard and passed inspection by an independent marine surveyor.

By the summer of 2019, RTA1 and RTA2 remained moored below New Orleans. When Transdev scheduled a Coast Guard inspection for the vessels’ in-service COIs that July, Coast Guard inspectors were met with “several unsatisfactory conditions related to RTA1’s structural and watertight integrity and firefighting and lifesaving capabilities during the initial moments of being onboard,” Capt. Kristi Luttrell, then-commander of Coast Guard Sector New Orleans, said at the time.

Coast Guard and RTA officials ironed out expectations over the following weeks, and by September 2019, RTA had removed Transdev as its ferry operator. With no ferry operator in place, ferry service between Algiers and Canal Street aboard the old Col. Frank X Armiger was suspended for close to three months.

Following a December 9, 2019, vote by its board of commissioners, RTA named LabMar Ferry Services LLC as its new service provider for ferry maintenance and operations. LabMar is a subsidiary of locally owned Laborde Marine. With a contract in place, LabMar restored ferry service aboard its own crew boat due to recurrent maintenance issues aboard the Armiger.

Finally, more than a year after the first attempt at inspections, both ferries have COIs and are in service.

“The addition of RTA1 to our fleet marks another significant milestone in the RTA’s efforts to stabilize and improve our ferry operations,” RTA CEO Alex Wiggins said in a statement December 15. “One of the agency’s top priorities has been entering RTA1 and RTA2 into revenue service. The agency will now focus on continuing to build a world-class riding experience that connects all moves in New Orleans and within the region.”

“The addition of RTA1 to the ferry fleet will ensure continuity in service along the Algiers Point-Canal Street ferry route,” added Flozell Daniels Jr., chair of the RTA board of commissioners. “Riders can rest assured that safe and reliable ferry service remains paramount as the agency moves forward in improving connectivity throughout the region.”

The ferry connecting downtown New Orleans and Algiers operates seven days a week, with departures every 15 minutes. Sunday through Thursday, the ferry operates from 6 a.m. to 8:45 p.m., with extended hours on weekends. Standard one-way fare is $2.

City leaders broke ground on the Canal Street ferry terminal redevelopment project in November. That project, which has grown to a total budget of $43.5 million, will include a pedestrian bridge over the riverside streetcar and railroad lines, with an emphasis on accessibility and aesthetics. The project is expected to be completed by the summer of 2022.

“We have made equitable transportation a top priority in this administration, and we cannot have equitable transportation without solid infrastructure at its foundation,” said New Orleans Mayor LaToya Cantrell. “We are excited to see the progress being made at the Canal Street Ferry Terminal in this two-year redevelopment project that will allow us to more efficiently move our residents between the Downtown and Algiers, and with minimal interruption to service while the work is getting done.”

Besides the portion from the federal passenger ferry grant, funding for the  ferry terminal project will come from a 2015 Transportation Investment Generating Economic Recovery (TIGER) grant, the state DOTD, the city of New Orleans, RTA and a $5 million land match.