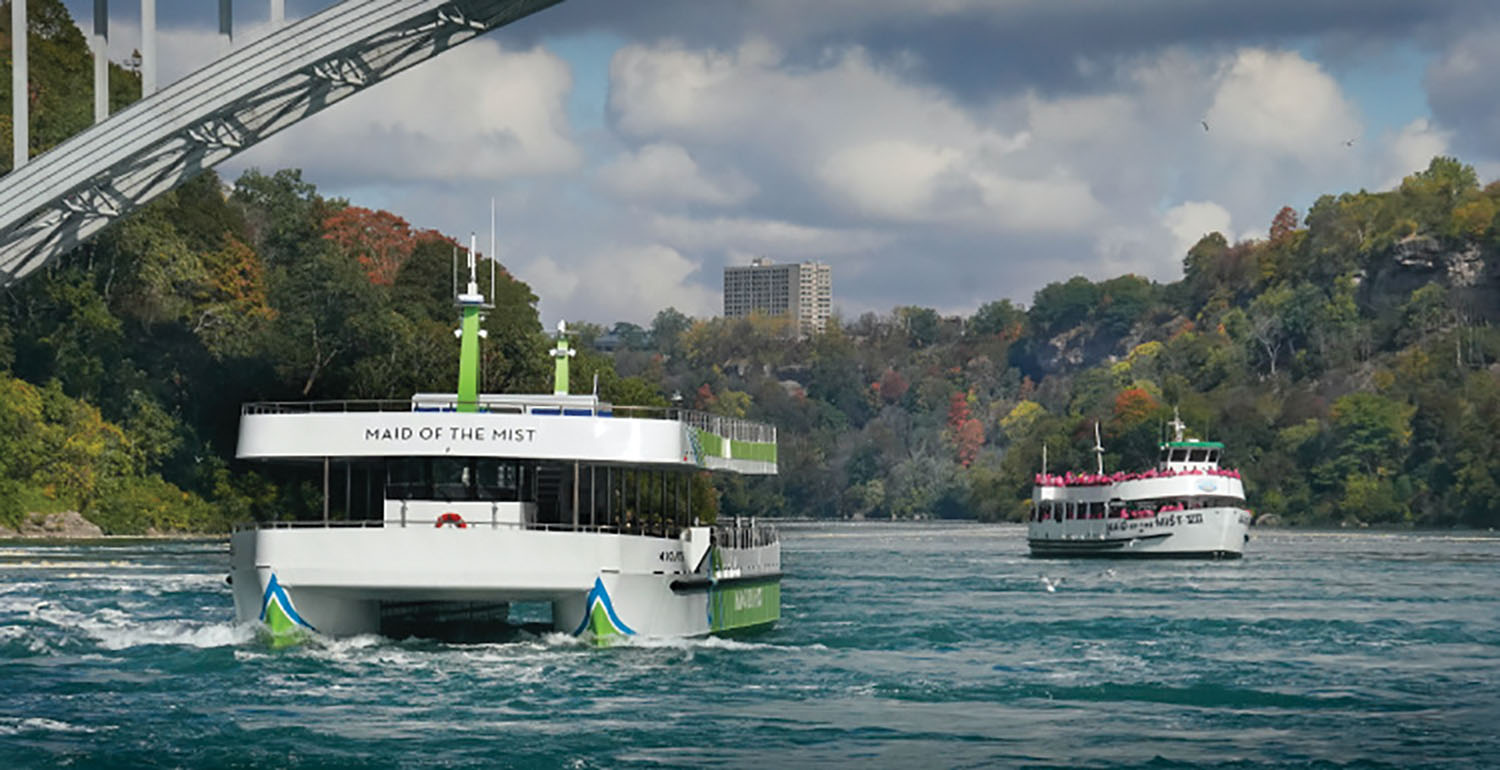 Niagara Falls’ new Maid of the Mist ferries made a splash when they launched in October. The two catamaran-style passenger ferries are all-electric and billed as completely emissions-free. With their debut, the passenger vessels James V. Glynn and Nikola Tesla became the first all-electric passenger ferries to go into operation in the United States. The Maid of the Mist, which has been touring visitors around the falls since 1846, partnered with ABB to design the electric ferry system.

Strupp opened the discussion by outlining the range of possibilities available for marine electrification, from battery power to diesel generator sets, fuel cells and other forms of electricity storage and generation.

“There are a lot of different ways, from a technology standpoint, that you can do this,” Strupp said. “There really is no one-size-fits-all solution here.”

Strupp then focused on the key benefits of electric propulsion, which include the potential for zero-emissions operation, reduced maintenance and operating costs, improved redundancy and safety and improved operational efficiency.

“What we’re looking for is vessels that operate in very predictable routes,” Strupp said. “They’re consistently going back to the same terminal or port, and it’s very repeatable. Electrification and zero emissions work really, really well there.”

Strupp admitted that, for now at least, the initial capital investment to implement an electric propulsion plant is much larger than for a conventional diesel-powered plant. However, reduced operating costs balance that over time.

“That’s something that’s coming down in price, and there’s a lot of federal assistance and state assistance out there,” he said. “But, really, the reduced owning and operating costs come in when you’re taking advantage of energy storage and shore charging.

“What it comes down to is a kilowatt of electricity is significantly cheaper to produce on land than it is on the vessel,” Strupp added, “so as much as we can take advantage of shoreside electricity in powering that vessel, it has a significant impact for reducing the owning and operating costs for the owner.”

From a redundancy perspective, Strupp said, even if one power bus goes down, the other is able to power both drivelines. By contrast, in a conventional diesel system, if one main engine goes down, that typically means loss of thrust for the corresponding propeller.

Finally, Strupp said all the technology built into electric propulsion systems allows them to function at peak efficiency.

“With all the digital technology aboard these vessels, the system is able to make real-time, intelligent decisions based on all the feedback from all the technology on the vessel to improve operational efficiency, much faster and much more accurately than any human could,” Strupp said.

In fact, digitalization is a key driver of the trend toward marine electrification, Strupp said, along with urbanization, carbon-free resources and environmental policy. Other contributors include automation and robotics and a global economic shift.

Bryn then shifted focus to the power source options available to operators interested in exploring electric propulsion for passenger ferries. There are plenty of hybrid-electric combinations available today, he said. One is a shaft generator, with the generator inline between a main engine and the propeller. With that setup, propulsion can come from the main engine alone or with the generator providing a horsepower boost (as in line haul usage) or solely from the generator (as during fleet work). A more familiar setup is diesel electric, with diesel-powered generators powering thrusters. Two similar setups include diesel electric with onboard batteries and diesel electric with shore power.

“Probably, fuel cells are going to play a bigger and bigger role in large vessels that need to go long distances and have higher power density requirements,” Bryn said.

Bryn said ABB representatives are able to sit down with clients to look at the capital expense and operating expense for each power solution, along with payback years and lifecycle costs and savings, to determine which power makeup best fits a particular application.

“Once we settle on a direction, we really jump into that and do the design in full,” Bryn said.

Strupp emphasized the importance of operators to partner with a marine design and engineering company that has experience across the full range of power applications, in order to best fit electric technology to a particular operational profile.

Bryn said he’s confident that the know-how is already in place to bring electric propulsion to a wide range of applications, though scaling components like the power grid is still a work in progress.

“In terms of electrification, I’d say the experience is there,” Bryn said. “We’re just trying to get those solutions productized.”

Sicinski then briefly looked at schematics of integrating battery power and diesel- or gas-generated power systems and gave a couple of examples of operational profiles.

Many different companies offer shore charging systems, Bryn said, but the shore charging component of a project ought not be overlooked or underemphasized.

ABB has a number of electric propulsion projects under its belt already, with the most recent being the Maid of the Mist vessels. Sicinski said the initial reaction from customers on the operations and experience of the James V. Glynn and Nikola Tesla have been very positive.

“The vessel owners are very happy with the performance and the process of getting electrified,” Sicinski said. “As well, when you’re riding these vessels as the actual cruise passengers, in the past, you’re going to be in a situation where you have loud, roaring engines, vibration. You have the odor of the exhaust when you’re on the top deck.

“That experience is completely changed with this application,” he added. “You’re vibration-free, it’s silent, you have plenty of power to get you where you’re going, and it’s clean. So the whole ride is a whole different experience.”

Sicinski admitted that, at times, there’s a bit of anxiety from pilots when posed with switching from a conventional diesel-driven propulsion system to an electric application. That anxiety comes from the immediacy of available horsepower with electric propulsion, as opposed to the slight lag of a conventional power, and the fact that electric propulsion often includes some form of 360-degree thruster, rather than conventional rudders. Experience with the new system often will allay those fears, Sicinski said.

“The overall feedback we’re getting is it’s typically about a 30-day training, then you’re off to the races,” Sicinski said. “The captains that have made the switch over don’t see going back to the traditional way of doing things.”

The panelists also overviewed ways flag state regulators and classification societies have been staying on top of power solutions.

“From what we’ve found, all the regulators are well on board and very cooperative to make sure we do implement this technology in a safe way,” Sicinski said.

Panelists also discussed the importance of integrators providing future maintenance and field support, as needed. That’s another area, Strupp said, where technology is being used to improve reliability and experience. Sicinski stressed that shipyards are already well-equipped to implement this technology, with the elimination of shaft lines and other factors, in some cases, even simplifying vessel construction.