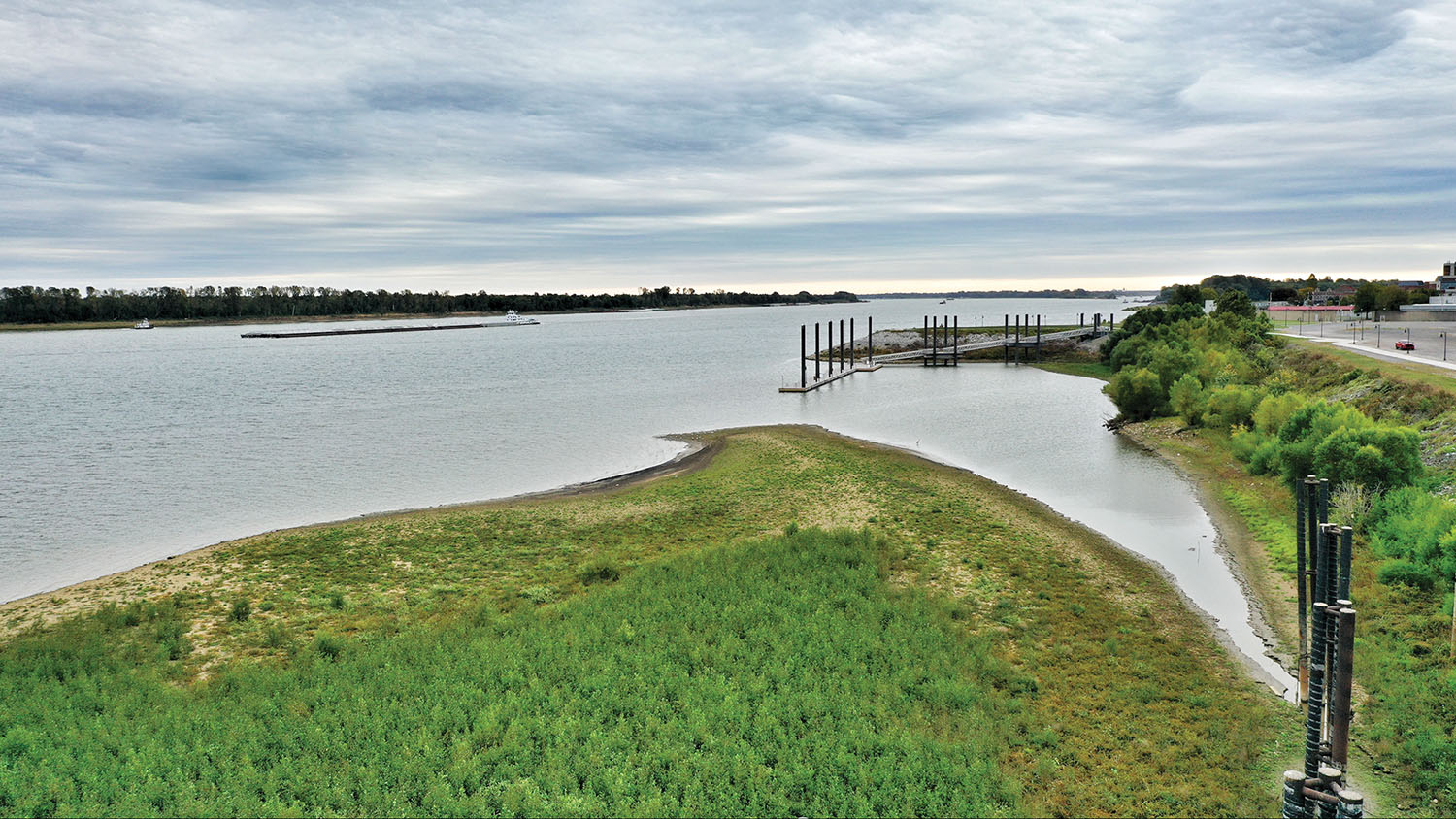 The city of Paducah (Ky.) expects to spend thousands of dollars soon to reapply for a permit for strategic dredging of a sediment deposit affecting a business’ offloading of liquid asphalt and threatening the transient boat dock the city built in the last few years.

The dredging would not remove the entire mud and grass island at Ohio River Mile 935.2, downstream of the confluence of the Ohio and Tennessee rivers and immediately downriver from the city’s boat dock, as that would cost too much, City Engineer Rick Murphy said. Instead, it would remove the interfering portion of the deposit and potentially extend the pier of the affected business, Midwest Terminal, he said.

The sediment deposit has already impacted Midwest Terminal’s ability to offload hot liquid asphalt during low-water conditions, usually about three months of the year, although that can vary widely with weather conditions, Murphy said. Although recreational boats are still able to dock at the transient boat dock, he feels that also would be threatened if dredging does not take place.

In May, the city received a Federal Emergency Management Agency grant that will pay for much of the cost. The federal government will reimburse the city for 75 percent of the expense, and the state of Kentucky will pay for 12 percent, leaving the city ultimately responsible for the remaining 13 percent.

The sediment deposit became noticeable at normal summer pool, about 16 feet on the local gauge, in late 2016, Murphy said. He believes it was caused by the city extending a land mass into the river prior to building the transient dock.

“Originally, when the plans were being made, probably back in 2007-08, the original designers had done a bathymetric study that said the siltation would be negligible on that,” Murphy said. Bathymetric studies look at conditions along the bottom of a body of water.

As part of a public notification period, some industry officials were concerned at the original plans for locating the land mass farther upstream in the Tennessee River chute near the tip of Owens Island at the Paducah riverfront, noting nearby facilities of both Crounse Corporation and Ingram Barge Company and a narrower waterway.

“They said ‘We’re not happy with that location. Could you move that downstream?’” Murphy said.
When the city moved its project a few hundred yards downstream, it needed a mussel survey because as many as six endangered mussel species are known to be in the lower Ohio River. Unfortunately, Murphy said, the new location turned out to be a hotspot for the fat pocketbook mussel. That caused the city to move the land mass needed for the transient boat dock another 500 feet downstream.

The final location for the transient boat dock is an extension of the city’s riverfront Schultz Park. The sediment deposit is located immediately adjacent to a former riverfront lounge, the only part of the now demolished J.R.’s Executive Inn that remains standing.

“The landmass itself creates a phenomenon within the Ohio River,” Murphy said, describing it as similar to a whirlpool that carries silt particles and deposits them just downstream into a growing pile of mud next to the riverbank. That pile grows more after extended high-water conditions, as happened in 2018, 2019 and 2020.

“So if the river’s up a long time, it’s going to rain out silt, and it’s going to build up,” Murphy said. “So what we’re looking at in our project is not removing all this material, because it’s going to come back, but what we want to do is establish a maintenance area and remediate that from having an effect, whether that be on downstream businesses or other interested parties.”

Engineering can help minimize the frequency of impacts, Murphy said.

The Kentucky Division of Water denied the city’s first application for a dredging permit after Paducah Water wrote a letter of concern, indicating piling up dredge spoils on a portion of the sediment deposit away from the Midwest Terminal pier and the transient boat dock could impact the utility company’s raw water intake for its drinking water supply.

The city had a $29,950 contract with HDR Engineering to prepare the initial permit package and paid about $11,000 to Mainstream Commercial Divers for more bathymetric studies. Along with miscellaneous other expenses, the city spent about $45,000 on the application that has now been denied.

Murphy has said the city’s reapplication for a 10-year maintenance dredging permit will cost more because it now must include mussel surveys and underwater investigations to comply with environmental requirements, including whether deep-water disposal will be permitted for dredge spoils or whether it could be used for a beneficial shoreline solution.

“Now we have to go back to the drawing board,” Murphy said.

Both HDR Engineering, which is based in Paducah, and Synterra Science & Engineering Consultants of Pikeville, Ky., submitted a Request for Qualifications (RFQ) to the city for the second permit attempt, showing they were qualified to do the work. A selection committee, which includes Murphy, chose HDR November 4 and is negotiating a fee for the work.

This time, Murphy said, the city intends to work with Paducah Water to make sure any permit proposals don’t negatively affect the utility’s intake.

Once the Kentucky Division of Water approves the permit, Murphy said, it could be months or years for the work to be completed. In the meantime, Murphy said, the city appreciates the patience of Midwest Terminal.

At a November 24 Paducah Board of Commissioners meeting, the board of commissioners approved a tolling agreement between Jim Smith Contracting, JSC Terminal (doing business as Midwest Terminal) and the City of Paducah. The agreement prevents the expiration until October 2025 of any statute of claims by JSC against the city while the city pursues the dredging and remediation plan for the build-up of the silt deposit.

“They don’t wish to file a claim with the city; however, they don’t want to lose their opportunity if it may need to come to fruition,” Murphy told the board at the meeting, which was held via videoconferencing software because of the COVID-19 pandemic.

David Kelly, partner with law firm Keuler, Kelly, Hutchins, Blankenship and Sigler LLC of Paducah, said the agreement would not strip the city of any defenses if one of the other parties was to file a lawsuit. It would only extend the legal timeline for when such a lawsuit could be filed.

“I think we’ve all agreed after having this conversation multiple months that this is us being a good partner with our business that is struggling and making sure that we’re providing the opportunities necessary to clean up this situation that is out of our control, but that there are some good solutions for that,” Paducah Mayor Brandi Harless said at the time.

Boaters should also be able to continue to use the transient boat dock, Murphy said, although he added that any flooding would continue to build upon the existing sediment deposit.

Ultimately, the city needs to remove the interfering parts of the sediment deposit, keep it from blocking access to Midwest Terminal’s pier, not interfere with endangered mussels and be cost-effective for taxpayers, Murphy said, vowing to continue to work on the problem.

“We’re eager to make the adjustments that need to be made,” he said. “We’re thankful that we have FEMA as a partner and our state disaster and emergency services, and we’ll do the best we can to make sure everything is accounted for and that we’ll get to enjoy the riverfront as never before.”

Caption for photo: A sediment deposit in the Ohio River at Paducah, Ky., has been greatly exacerbated by prolonged high-water conditions the past three years, according to the city engineer. It has impeded one business’s ability to offload hot liquid asphalt and is now endangering the city’s newly built transient dock for visiting boaters. (Photo by Vick Patel, Paducah Drone)