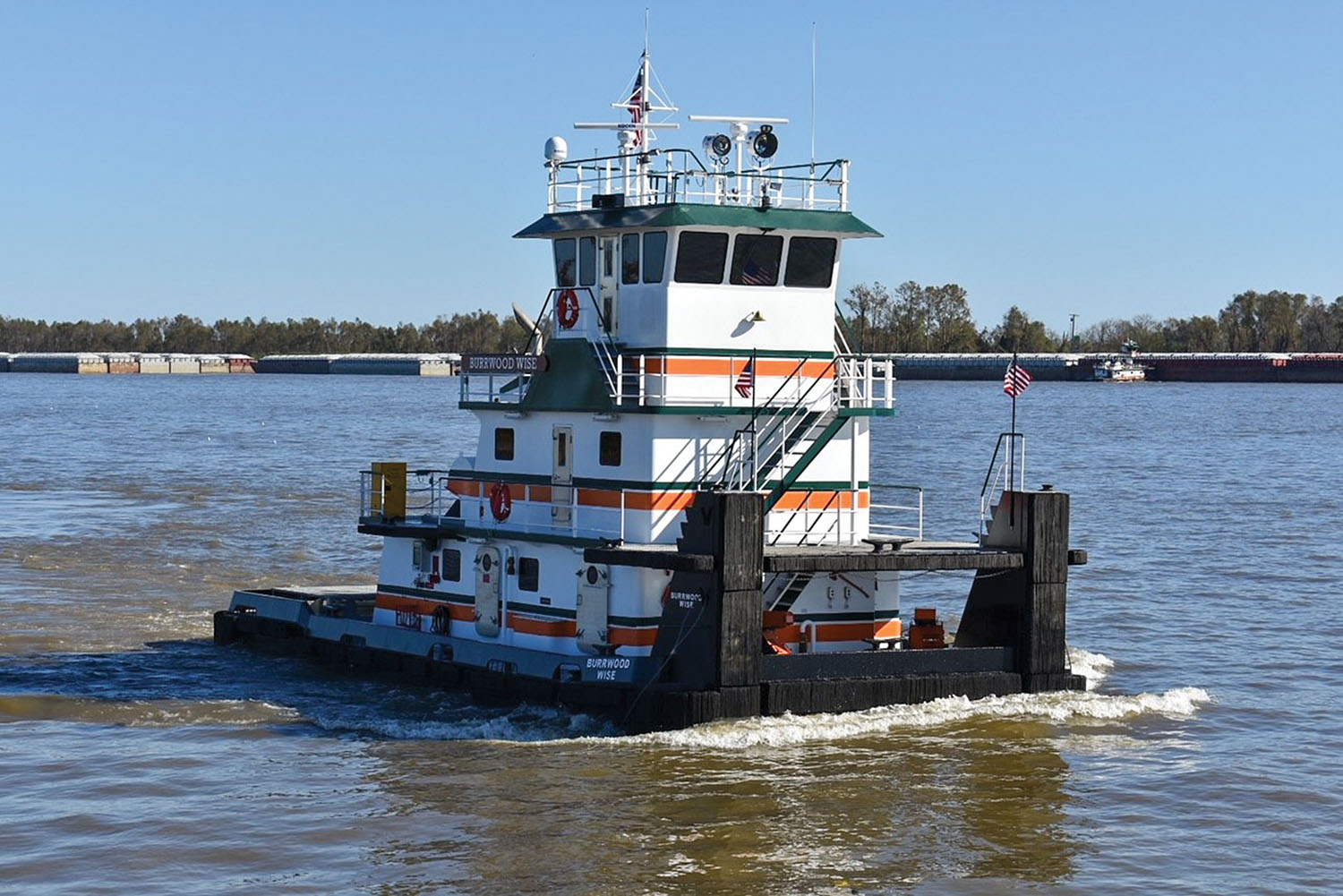 Gnots Reserve Inc., a St. Rose, La.-based provider of fleeting and towing services on the Lower Mississippi River, has put a new towboat into service: the mv. Burrwood Wise. The Entech-designed towboat measures 64 feet by 27 feet, with a depth of 9 feet, 6 inches, and boasts 1,500 hp.

Eymard Marine Construction & Repair Inc., located on the Harvey Canal, built the superstructure of the Burrwood Wise, with Gnots Reserve completing the vessel at its repair facility on the left descending bank of the Mississippi River in St. Rose.

The Burrwood Wise is Gnots Reserve’s ninth towboat and its seventh new build since the early 2000s. The vessels work in the company’s 400-capacity barge fleet, while also offering tripping services to grain elevators on the Lower Mississippi in Myrtle Grove and in Jonesville, La., on the Ouachita River.

At first glance, passersby might assume the mv. Burrwood Wise is named after a family member of Gnots Reserve’s president and owner, Daniel “Dan” Wise, but that’s not the case. Rather, the towboat pays tribute to Wise’s hometown of Burrwood, La.

Burrwood won’t appear on most maps. But the thousands of oceangoing vessels that travel up and down the Lower Mississippi River year after year—and the industries that thrive on that global trade—do so thanks in large part to the groundbreaking work carried out by the former residents of that bygone settlement.

In the 19th century, much like today, the Mississippi River’s mouth was plagued by sediment buildup, particularly at Head of Passes and near where Southwest Pass meets the Gulf of Mexico. Congress, leading up to 1900, directed the U.S. Army Corps of Engineers to survey the channel and develop a plan to maintain a 35-foot channel in the lower river. That groundwork led to a plan contained in the 1902 Rivers & Harbor Act to re-engineer the mouth of the river in order to create a more dependable deepwater outlet. The plan included building a dredge, installing sills, laying mats and building jetties on either side of Southwest Pass, and establishing a settlement along Southwest Pass to house the Corps personnel overseeing the effort.

The settlement, called Burrwood, was built on the left descending bank of Southwest Pass, near its end. The Corps office and initial houses were completed in 1908, with the town gradually expanding over time. By World War II, Burrwood gained a Navy base, a lookout and heavy artillery for guarding access to the Mississippi River. A German U-boat patrolling the area actually fired a torpedo at Burrwood during the war, but the torpedo failed to explode. By the 1950s, the town also housed a station for the U.S. Weather Bureau, the forerunner of the National Weather Service.

Wise said some of his earliest memories are from the tiny town of Burrwood.

“I was born in Burrwood, which is about 128 miles south of New Orleans,” Dan Wise recalled. “You go to Venice, which is the farthest place cars could go, then it’s 28 miles below Venice by boat. My daddy and two brothers went there to work for the Corps of Engineers in the late ’30s and early ’40s.”

Wise said the town really was as remote as it sounds. There was no hospital, no doctor to speak of, and no cars.

“There was a one-room school-house that I went to; I started first grade at five years old,” Wise recalled. “The groceries and the mail came down by boat. There were no stores or anything like that.”

Burrwood was just one of the far-flung, historic settlements along the riverbanks and in the marshes of lower Plaquemines Parish. They were vibrant communities that thrived despite, or maybe because of, the absence of roads. Others included Pilottown, which remains today as a base for river pilots; Port Eads on South Pass, which was rebuilt after Hurricane Katrina as a marina; Oysterville, also on South Pass; La Balize, a French fort dating to the early 1700s; and Grand Bayou Village, a community of the Atakapas-Ishak/Chawasha tribe, located near Port Sulphur.

Wise said kids in Burrwood played just like kids in any other community in those days. He can remember playing “cowboys and Indians” and playing baseball.

“They used to play Pilottown and Port Eads,” he said. “They’d go there on the weekends to play baseball and softball.”

Other pastimes are more unique, if not to Burrwood, then to the small communities near the mouth of the river of the time.

“I remember going out the back door, and there was a canal in the back where you could catch crab and redfish,” Wise said. “The banana boats were coming to New Orleans in those days, and we’d wave from the bank, and they’d throw big bunches of bananas overboard, and they’d float to the side. Guys would go out in skiffs, and it seemed like we’d always have a big bunch of bananas hanging on the back porch, where they’d be ripening.”

Wise said he can remember the Weather Bureau sending up huge weather balloons from the station at Burrwood. He also said his first haircut, besides trims by his father, took place on the Corps dredge assigned to Southwest Pass. Wise said he also remembers the battle to protect the community from high water, subsidence and storm surge.

“The marsh was receding in those days,” Wise said. “I can remember they pumped in the whole island with sand. The houses were raised, and I can remember walking around outside the house in mud up to my waist where they’d pumped it in.”

He also recalled the long trips when he and his siblings would go visit his grandmother, who lived near the Inner Harbor Navigation Canal.

“We’d catch the boat to Venice, then we’d wait by this bar where the bus would come by,” Wise said. “We’d get on the bus, and there was a shell road to Gretna. Then we’d catch the ferry over to New Orleans. It was an all-day affair.

“One of the things we’d say would be, ‘Look at the cabin on that car,’ and ‘Where are we going to dock the car?’” he added. “We didn’t know about cars at all.”

But as often happens, the Wise family eventually moved away from Burrwood.

“I guess in the ’50s everyone moved north,” Wise said. “One uncle, my uncle Dan, went to Alaska. My uncle Gerry moved to Ohio. And we moved up north to Buras.”

Buras is about 20 miles up the road from Venice.

Little remains of the town of Burrwood today. Like so much of Plaquemines Parish and, indeed, of southeast Louisiana, Burrwood was lost to vanishing wetland and the annual onslaught of high water and storms. But the people of Plaquemines Parish are a proud and resilient lot, with their heritage and history coursing through their veins, much like the mighty river that winds through Plaquemines itself. As such, the mv. Burrwood Wise is a fitting tribute to both the town of Burrwood and to all who made their home there.

Eymard delivered the superstructure to Gnots Reserve in January 2020, with Gnots Reserve Port Engineer Ryan Hayes overseeing construction and completion of the project. The company finished outfitting the towboat in October 2020, and the Burrwood Wise entered service January 1.

“Gnots” is an acronym for “Greater New Orleans Towing Service.” Wise went to work for the company in 1970 and is now semi-retired. His children, son Dane Wise and daughter Danielle Hymel, now manage the company.

Caption for photo: The mv. Burrwood Wise draws its name from the town of Burrwood, La., hometown of Dan Wise, Gnots Reserve Inc.’s president and owner.